Finegear has just launched a new modular DIY analog mixing console that is tailored to grow with your routing needs. Yes! You choose the channel strips you need and configure it yourself.

A modular, fully expandable analog mixing console? That's what the good folks at Finegear, based in France, have created. You may remember the Specialwaves Mine, premiered here on AskAudio and Palette which are both modular MIDI controllers. The difference here is we're looking at a fully analog modular mixing console!

Here's the full press release below with plenty of details and spec:

A completely original concept, the Mixerblocks series is a modular and expandable analog audio mixing console. A variable number of channel strips can be connected like building blocks between themselves and to a main
I/O docking-block. Each channel-block can have one or more extra-blocks connected to it, adding supplementary features such as sends, returns or submix groups to the configuration. 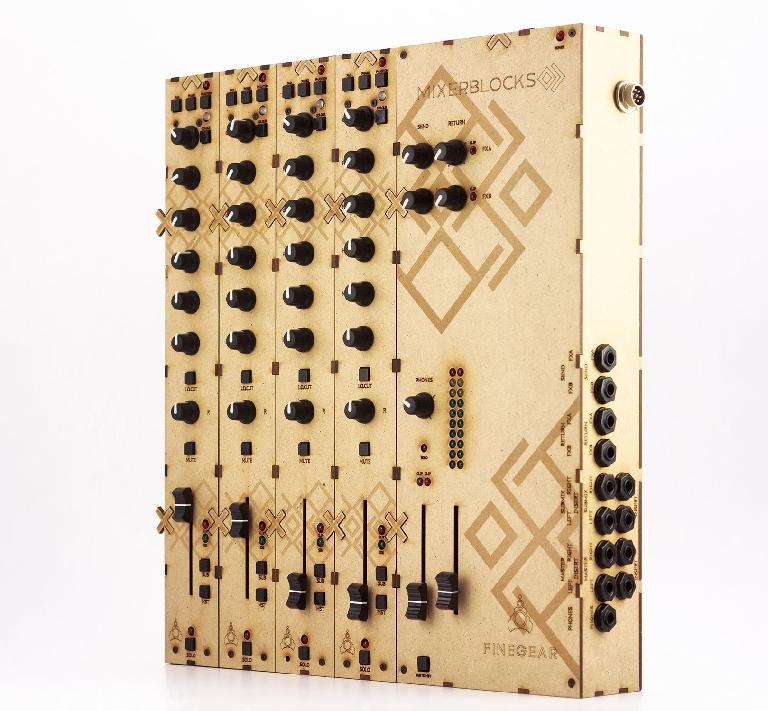 Musicians, producers and sound-engineers can customize the configuration of their console according to their needs. They can also extend the functionalities of any audio channel with additional features such as
FX send/returns, subgroups, etc.

Mixerblocks adapts to various music production environments, from home studios to rehearsal rooms to live concerts, and it is compatible to the lifestyle of groups on the go and to the collaborative work ow of music making.

Mixerblocks is a DIY project with a choice of enclosures: MDF or sheet metal (coming soon!). Most of the parts are SMD and already soldered on the PCBs.

All that’s left to assemble are the controls and a few through-hole parts, making this an easy beginner's build. 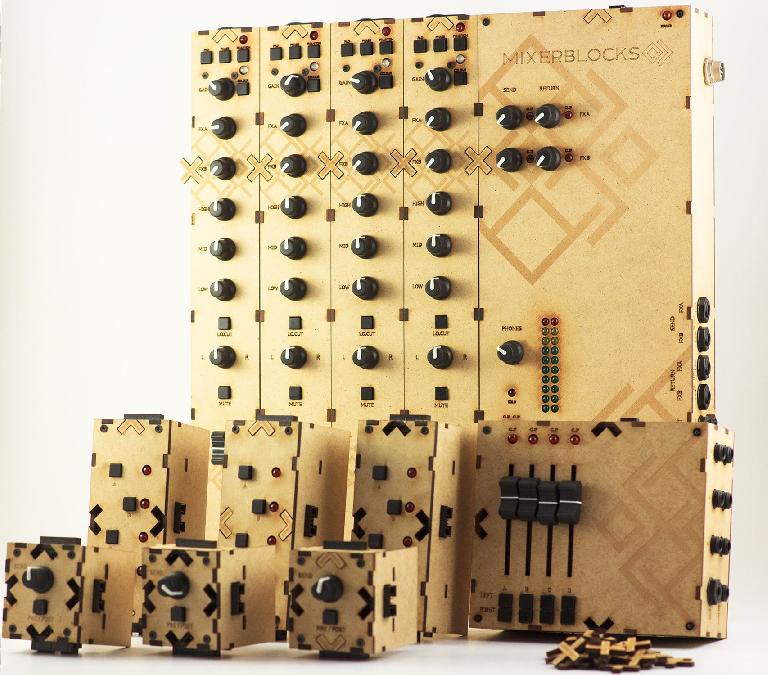 Different types of channel strips and extra e ects and submixes attach to a Main Docking Block with durable connectors and are fixed into place like the pieces of a puzzle, thanks to the clever design of the MDF enclosure. A basic input channel is available for now, while other types of channels, such as tube preamps and passive equalizers, are currently the subject of design and development.

Inside each channel, the preamp and EQ boards are separate, allowing for various groupings. The current input channel is also designed to be compatible with the Colour format from DiYRE.

The project is licensed under a Creative Commons Attribution-ShareAlike 4.0 International License, to encourage others to design their own compatible blocks and develop the Mixerblocks palette.

With Mixerblocks, you can keep adding channels to your console, each time you bring in a new instrument to your setup. Similarly, you can add new FX send/return buses for extra e ects. You can also add submix buses to better group your instruments. More devices, such as a recorder/looper and a vuMeter indicator, are being designed and will be announced soon. Stay tuned!

More than just adding up the sounds from each channel, Mixerblocks allows routing channel signals to e ects and/or, more interestingly, to any submix buses. The result turn can be exibly routed to the master outputs (left, right or both), processed through insert e ects or connected to other devices through the individual outputs. And this is only the tip of the Mixerblocks routing iceberg. 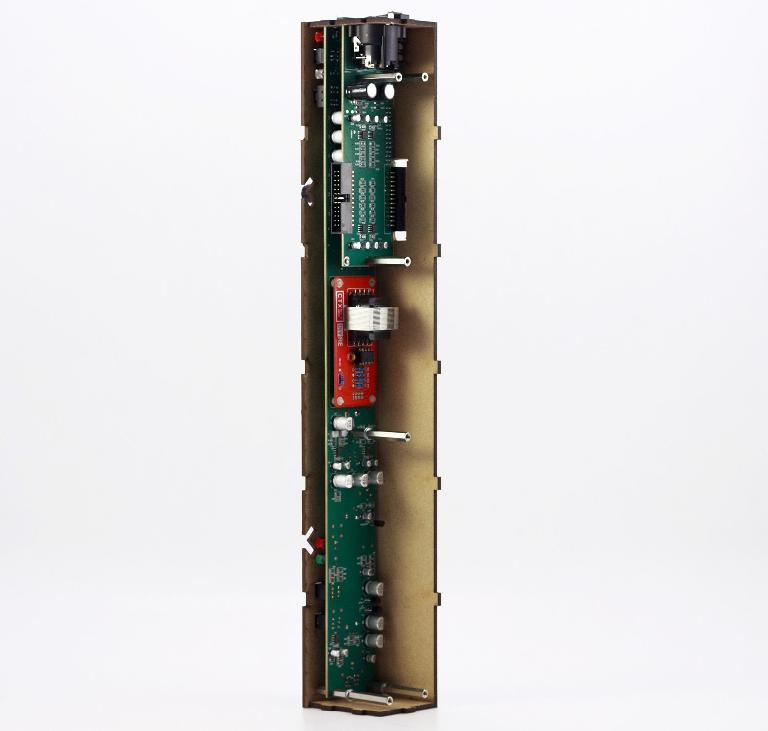 Inside a Mixerblocks basic channel block.

The Mixerblocks concept includes the possibility to design di erent types of channels with varying features and sonic behaviors — different types of preamps or EQs come to mind. The mixing console can truly adapt to any particular need by including a combination of channel types.

The central block for any Mixerblocks console, it powers the channels, it sums up the signals, and sends them to the (balanced) outside world.

The signals routed by the Main Docking Block are: the stereo master mix, the stereo submix, two FX sends, their two-respective effect returns, a solo bus (for the phones output), the incoming signals from the extra-blocks. 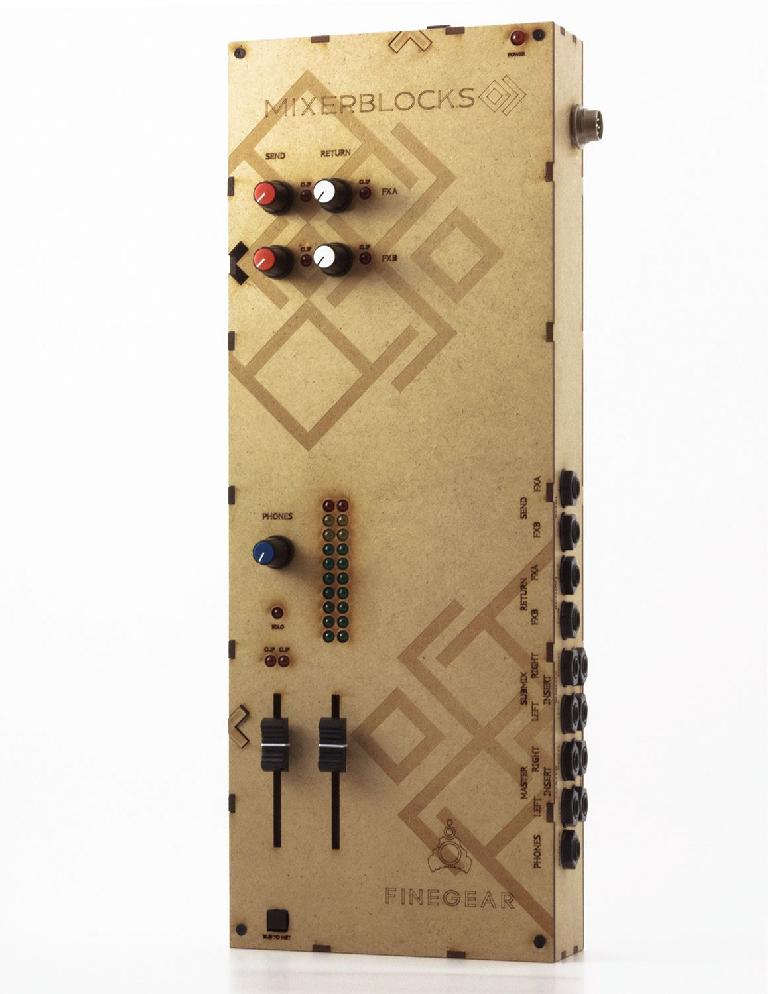 The master and the submix buses also have FX inserts and balanced outputs. A stereo 10 segment LED vuMeter helps visualizing the output signal while strategically placed clipping LEDs indicate if any signal saturates.

A signal intensity and a clipping LED give visual feedback of the channel’s audio signal.

It is powered by, and it sends its signals to the Main Docking Block.

A row of extra-blocks is connected to a corresponding Extra-Docking- Block which routes the “extra” signals into the Main Docking-Block, thus adding them to the main mix bus.

A power supply from Total Audio Control is also available at the shop.