Language
If you're looking for a large MIDI note sequencer controller that can play back 6 patterns simultaneously and store over 700 patterns and looks really, really cool, then check out the NSC-32.

Just a few days ago, Misa Digital announced their vision of the next generation hardware MIDI sequencer, the NSC-32. Think Launchpad Pro or Maschine/Push pads but much, much bigger. And in this case size is everything.

Misa Digital told us the NSC-32 is their take on a step sequencer designed to give "the musician/DJ more control over the sequences being played". It took a total of 13 months as a side project to create and bring to market, and is assembled in Sydney, Australia.

This note sequencer can play up to six patterns simultaneously and allows you to store up to 768 sequences!! (That’s one for every pad). This video shows it in action:

The Misa Digital NSC-32 (NSC) is a Note Sequence Controller - a new type of electronic musical instrument that allows the user to manipulate and cue electronic music sequences live. It is an alternative take on a "step sequencer".

It is a MIDI controller and makes no sound of its own - it connects to a synthesizer/sampler/DAW via MIDI or USB.

Note sequences are visually displayed on the note grid and can be modified by pressing the cells on the note grid. The individual notes are represented as blue illuminated cells. Notes can be selected, copied, moved and pasted using the control functions. 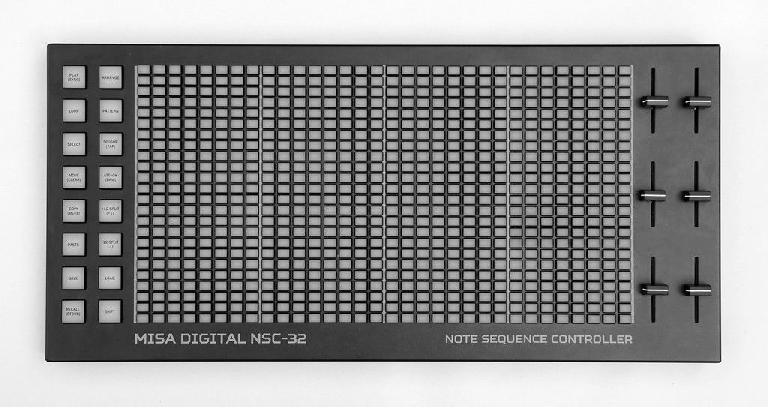 Sequences can be played (cued) and stopped in sync with the master clock.

Sequences can be stored in permanent storage for later use. The NSC-32 can store up to 768 sequences. Each cell on the note grid behaves as a save location. This means you can visually group different sets of presets on the grid based on category.

Pricing is currently $1,299 USD plus shipping.