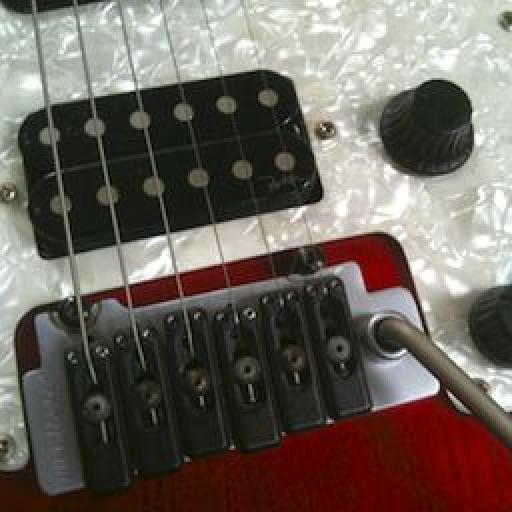 Language
Using guitars as MIDI controllers is not a new concept or a passing fad. Toby Pitman explores the history of MIDI Guitar controllers from the early 80s to the crop and those yet to hit the market.

The concept of using the 'guitar' as a means to trigger synthesized sounds has been around for a long time. When I say the 'guitar' what I really mean is the fretboard.

The whole point of MIDI controller systems being built into guitars or being based around the guitar's geography is it enables the guitarist to navigate both technically and conceptually an interface that is familiar to them.

I'm a good example of a guitarist who is really into synths but finds triggering these sounds from the piano interface very frustrating as technically I'm just not good enough on the piano. As soon as I got a MIDI system put into one of my guitars it was like a revelation. I could now play all these great sounds from an instrument I understood and had the technical ability to play.

The conventional approach to guitar synthesizers has been to fit a guitar with a Hex pickup and convert the pitch information for each string into MIDI. This technique goes way back to the early 80s with the Roland G-303/G-808 synth guitars (These didn't use MIDI but controlled a dedicated analog synth that came with the guitar). 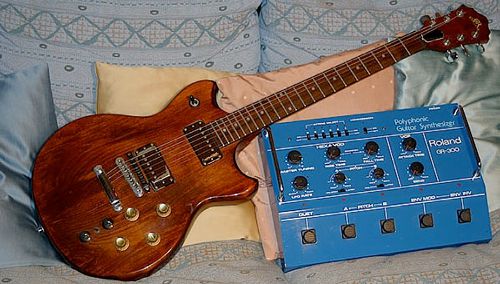 This has become a very popular way to get MIDI from a guitar but has always suffered from the fact that it takes time to convert the pitch to MIDI (you also need a converter) which on badly calibrated systems can feel like playing through mud. There's also the issue of glitches generated by badly setup instruments (fret buzz) and overzealous techniques like vibrato. It requires a bit of getting used to!

There are a couple of Hex pickup systems around with the Roland GK-3 system being the most popular as it can be easily fitted to practically any guitar without damaging the instrument. Rolands VG guitar modeling technology (COSM) is a popular companion to this pickup. 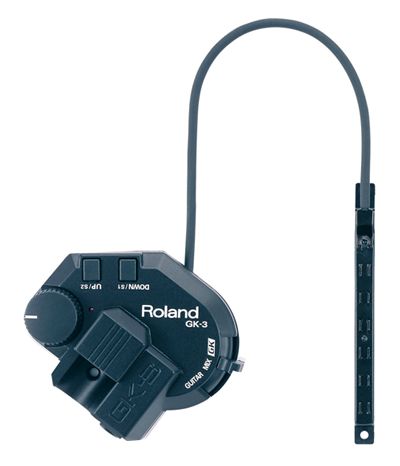 Another good system is the Graphtech Ghost MIDI setup. This uses Piezo saddles (available for all popular bridges) connected to internally housed circuitry (requires some routing) to convert the pitch. I had this built into a Parker P-38 and it works great. 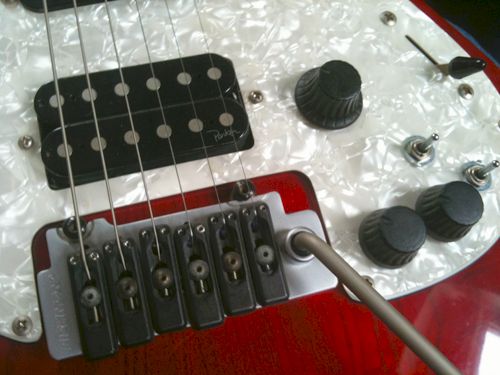 Gibson's Robot Guitar uses this type of system and many other manufacturers like Godin, Parker and Brian Moore all make guitars using this Piezo MIDI setup. There are also less conventional instruments like the Chapman Stick that are well-suited to MIDI. I've even seen a MIDI Pedal Steel!!

There is another angle to all this that I find a lot more interesting, and that's the idea of a dedicated MIDI guitar controller! Not a real guitar per se but something shaped and mapped out like a guitar solely for triggering MIDI events. No pitch detection, no conversion, no latency.

Now again this isn't a new idea and the concept has a history that dates back to the 60s when Vox released the V251 Organ Guitar. This never really caught on basically because it didn't really work very well! The concept, however, was a good one.

Instead of converting pitch, the guitar's frets acted as contact points to complete an electrical circuit which generated a specific note (using the built-in organ tone generators). Each fret was actually separated into six unique frets (contacts), one for each string. This was a very similar voltage-based concept used when pressing a key on an analog synth or well, an organ!

Although the Vox Organ Guitar died a commercial death, the concept of using frets as contact points resurfaced in the mid 80s with the invention of two MIDI controllers based on the 'guitar' concept. The first (in no particular order) was Stephen Randall's Stepp guitar (this had built-in sounds but was later made into a controller-only version), the second was the SynthAxe. 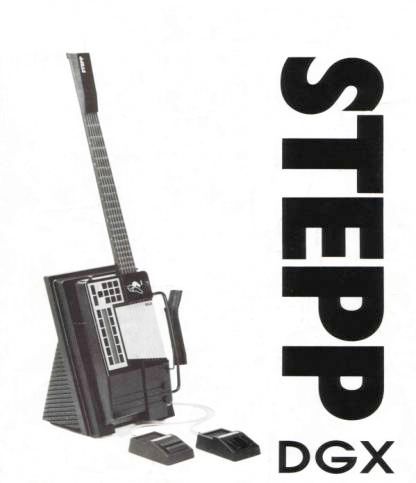 Both controllers worked on the premise of the fret/contact points but with a difference: in both cases the strings that covered the fretboard were separate from the strings that triggered the notes. This is pretty obvious when you look at the SynthAxe which literally looked like an axe! 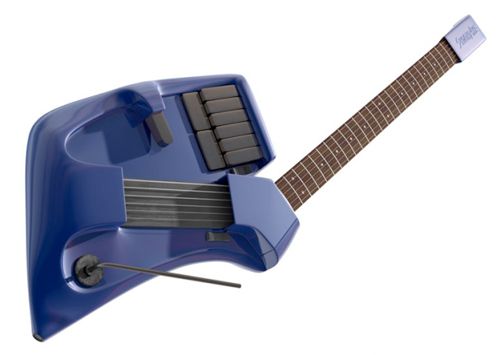 Again both of these innovative designs sadly never really caught on due to the fact that at that time the technology was so expensive. In 1985 a SynthAxe would have set you back $13,000. That's $27,200 in today's money!! This is a shame as the SynthAxe was reported to have been the best ever MIDI controller for guitarists, when it worked!

It wasn't all bad for MIDI guitar in the 80s though. You could have picked up one of these bad boys: the space age Casio DG-20. Cheap, and unlike its predecessor the DG-10, it had MIDI out, too!

Instead of using strings some manufacturers have taken a different approach to guitar like controllers. Essentially replacing each fret with a button! Starr Labs are the most prominent company that have done this with their Ztar range of controllers. 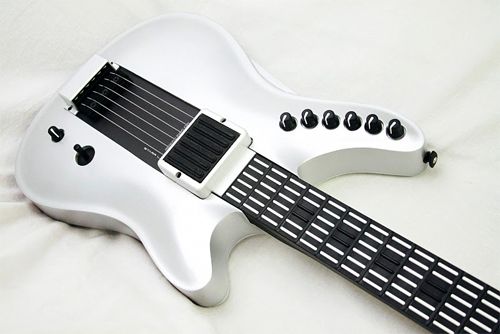 The Ztar Z5 below is fitted with MIDI touch strips for strings. Nice! 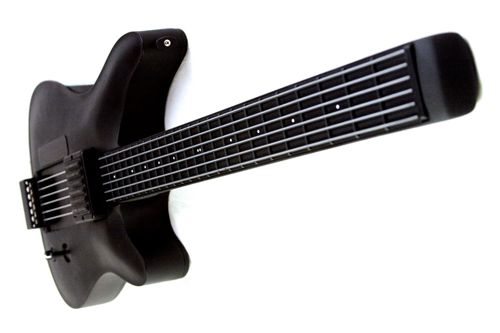 Another product making an appearance soon is the Kitara. Again the fretboard is a series of buttons but this time you trigger the notes and modulation from a Kaoss type touch pad which looks rather interesting. 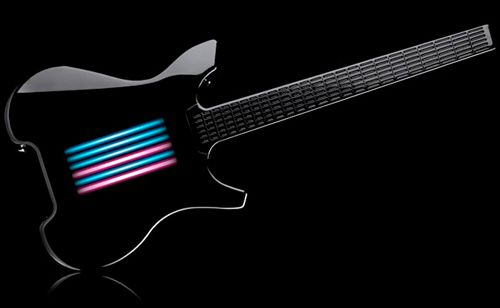 Both these manufacturers' instruments aren't cheap and start at around the $1,000 mark and go upwards from there! About ten years ago Yamaha had a stab at this with the EZ range of teaching instruments. Below is the EZ-EG that was cheap and had MIDI out.

So can this tech be done cheap now? Well read on!

Well it looks like cheap dedicated MIDI guitar controllers are having somewhat of a resurgence, all thanks to a rather unlikely candidate! The nemesis of guitarists, the Guitar Hero game!

There are a number of companies making Rock Band controllers that also function as MIDI controllers. This may have something to do with the fact that Rock Band 3 features two levels Hard and Expert that require you to play the right chord shapes when playing the game. The Wireless Fender Mustang Pro Guitar For PS3 is the latest to maybe show people that playing guitar has nothing to do with pressing five brightly colored buttons! Yes, it does MIDI! 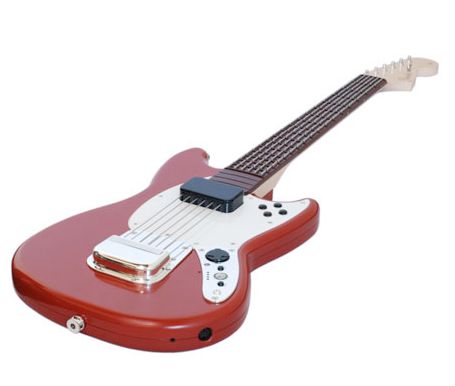 Just like Starr Labs Ztar range each fret has a button that outputs a MIDI note. Now I'm not saying this is a pro bit of kit but it looks like it could be fun!

Another one is the YouRockGuitar. Again a Rock Band controller doubling as a MIDI controller this time with inbuilt sounds (really bad ones!). I've heard some positive feedback for this one and although it has some limitations (only one note per string), it's again a step in the right direction. 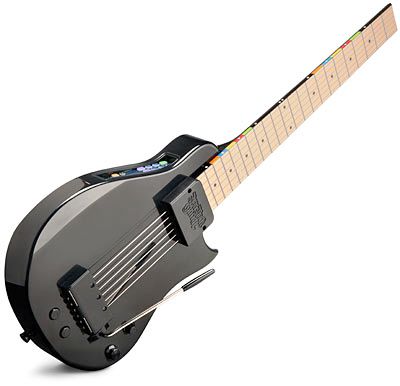 When you consider each of these comes in at under $200 (Mustang Pro is $88 on Amazon!) that might be worth the risk of actually trying one out!

The last one comes from the one and only Starr Labs and is named the Rock Controller. This looks like the most likely candidate for something that might really work. Again it's a game controller with MIDI functionality. 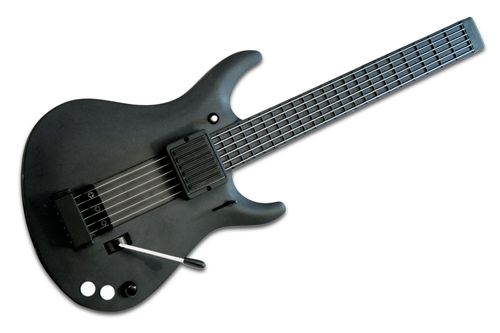 Seeing as it's made by a company that has years of experience with MIDI controllers I'm very tempted to get one... if it ever comes out!! The word on the street is that Starr Labs need an investor to manufacture this on a large scale (being a small company) to make it financially viable and keep the price sensible. Fingers crossed, eh!

So who knows how this will progress? Anyway, I'm off to play some sampled burp noises on my MIDI guitar!!

Rishabh Rajan
when you say the yourock guitar can only play one note per string, how is that a limitation? Don't all guitars have the one note per string limitation?
Are you referring to tapping or hammer-on/pull-offs? These are both possible with the yourock guitar.
tobypitman
As far as I know you can't have two notes playing simultaneously on one string unlike the Ztars.

Thus you can't hold down a chord with the left hand and play (tap) a melody over the top without loosing the chord notes.

This would allow for real piano type chord voicings otherwise impossible to play on a guitar.

Please correct me if this isn't the case.

Peter Schwartz
Toby, loved reading your article! Saw Pat Methany many years ago playing the Synclavier guitar in concert but sadly he mainly used it to trigger sampled animal noises on that gig. :-(

Interesting that the Ztar lets you play multiple notes on one string. Is that a feature than you can turn on and off on that unit?

Ben37
several years ago i tried using a godin synth guitar with a gr-33, to control software instruments in logic. it was alright but I couldn't get rid of the latency.
Seemed like learning piano would be a quicker solution than learning how to control that setup. Maybe I'll give it another shot.