Language
Cubase has always been one of the most powerful DAWs when it comes to MIDI programming, but did you know you don't even need a keyboard to create beats and melodies? Read on to find out how it works'¦

On any MIDI or Instrument track, go to the Inspector panel on the left and click on the MIDI Inserts tab. Here you can load up to four MIDI FX per channel. Unlike audio effects, MIDI effects generate or process MIDI and not sound, so you'll still need an instrument of some kind connected to the channel. Click on an effect slot and choose an effect. Some interpret incoming or existing MIDI and others can generate it from scratch. The Step Designer for example provides you with a mini sequencer within Cubase. It can have multiple patterns and you can change length, resolution and swing as well as storing and loading presets. It's monophonic and great for acid basslines. 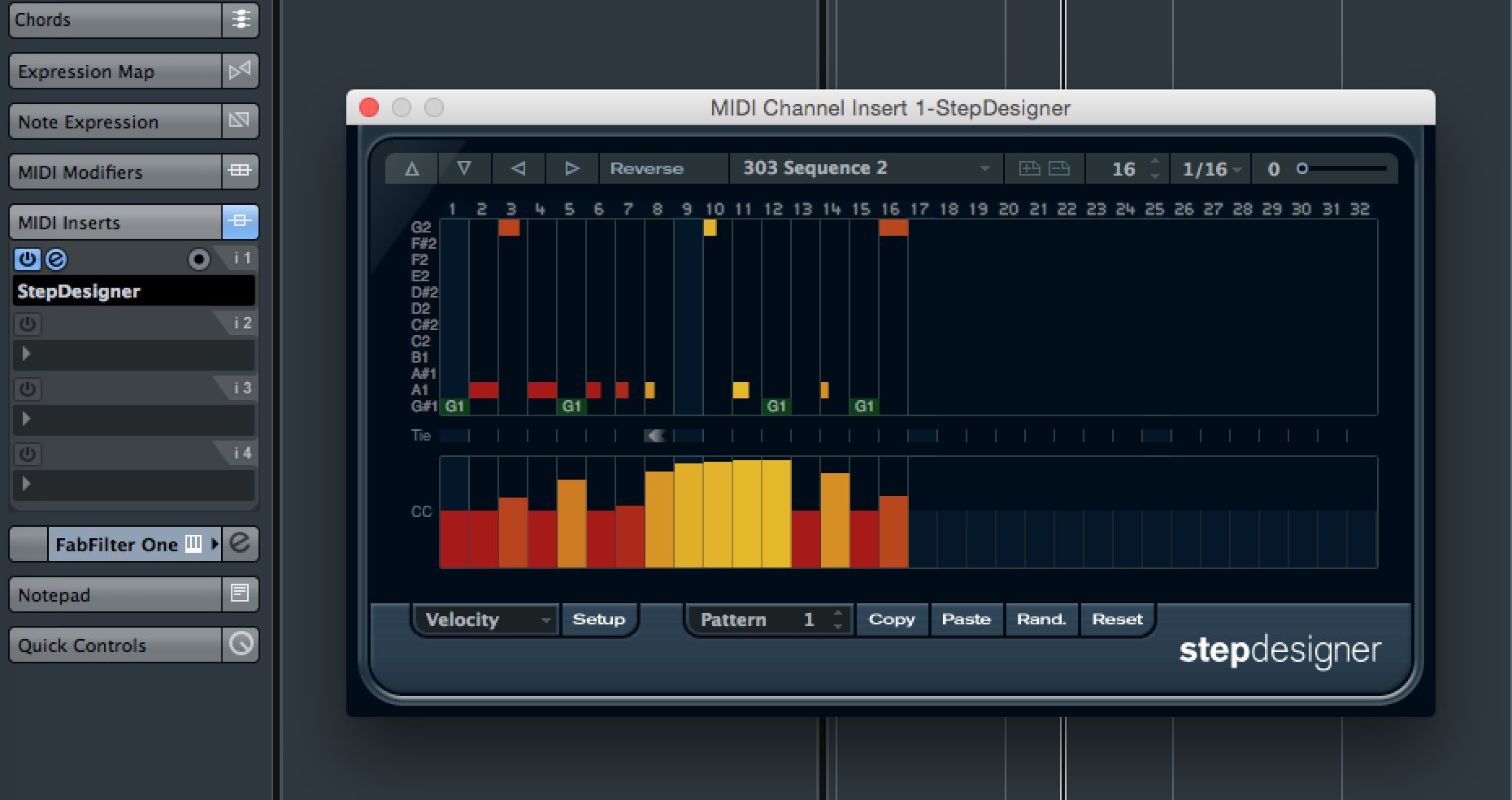 Any MIDI you enter into this or similar plug-ins remains virtual and can be edited at any time. To make it 'real' and render it down onto the track, set up a loop with the locators and choose MIDI > Merge MIDI in Loop and be sure to check the 'include inserts' box. This places a copy of the MIDI pattern onto the track where it can be worked with like any other MIDI part. You will have to deactivate the MIDI effect before you can hear the results, but you don't have to delete it. 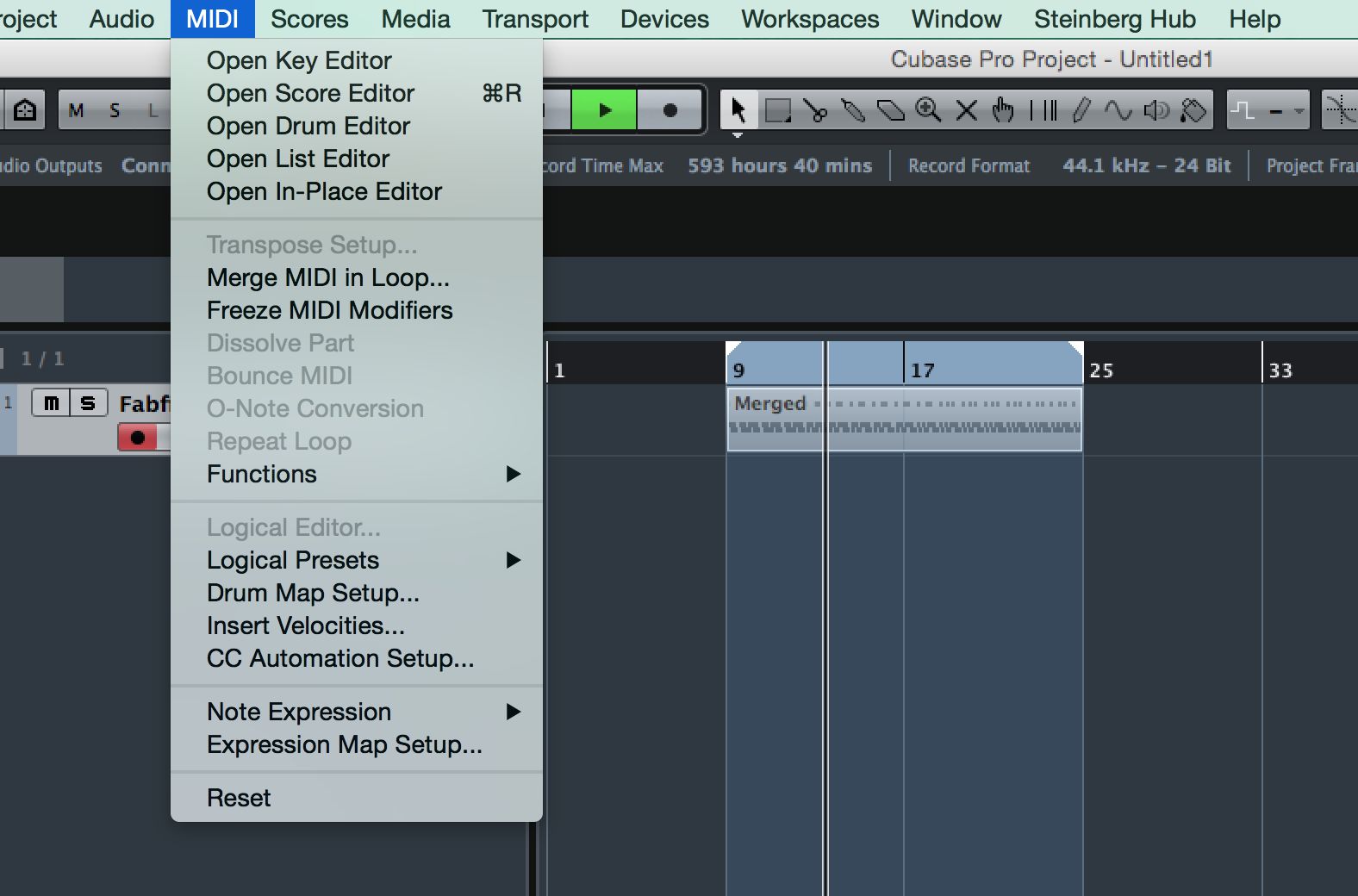 Another cool trick is to record the output of the plug-in in real time. This is much the same as recording through an audio effect: the results are captured as part of the take and are not really meant to be removed post-recording. Here I have loaded a Chorder plug-in which creates chords based on single notes that I press. By activating the small record button on this effect (and any other MIDI effects) and then pressing Record in the transport, the chorded MIDI part is captured directly into the track in real time. It's an easy way to create advanced MIDI clips with minimum effort! 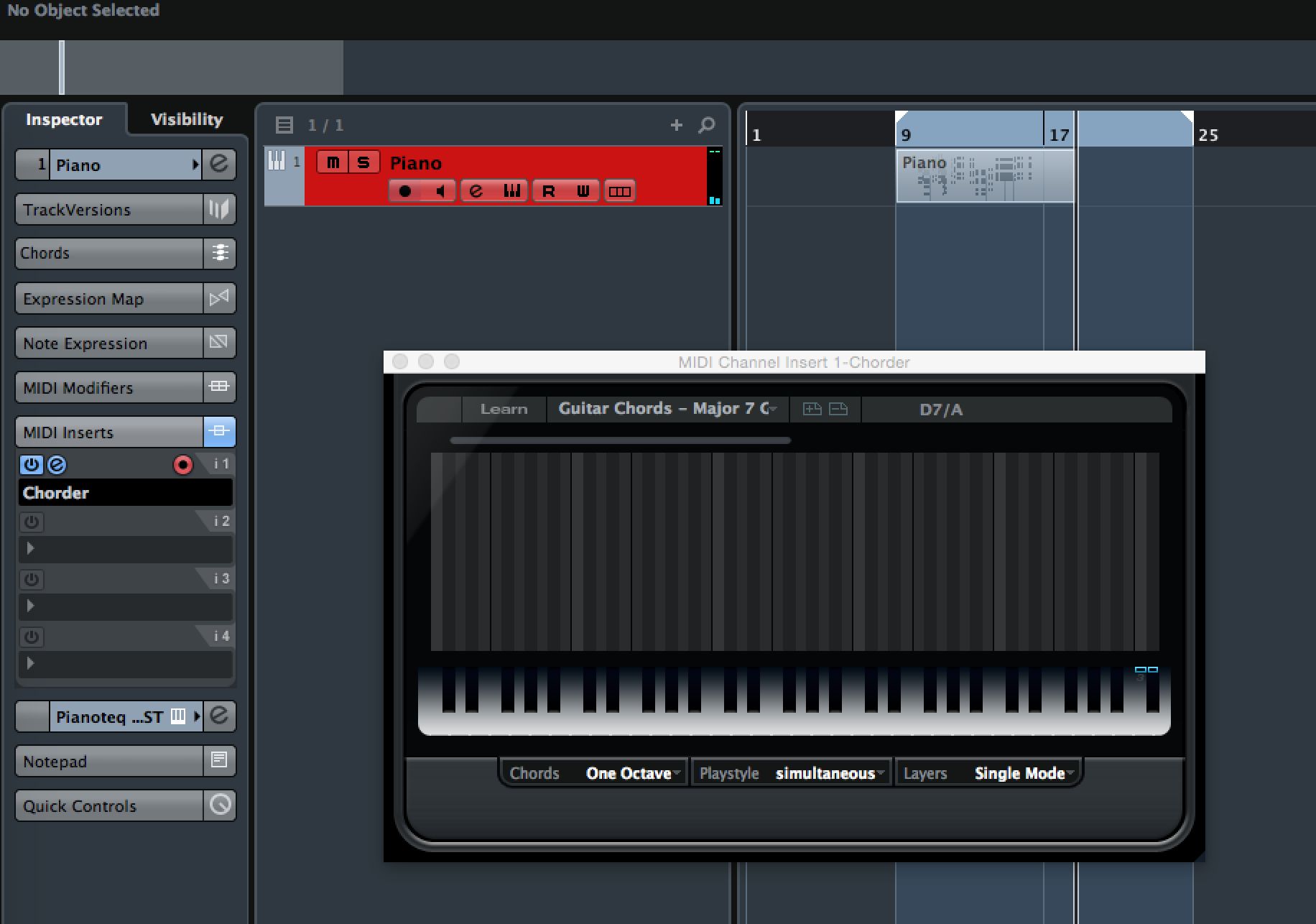 MIDI effects can be loaded in a chain just like audio effects and in the same way the earlier ones affect the later ones. Here for example I have loaded a compressor effect, which evens out the velocities of all MIDI notes based on your settings just like an audio compressor does with volume, and then an Arpache SX effect which is an arpeggiator. When I play notes, they are 'compressed' to have their velocities equalized in real time, and then arpeggiated for a dynamic sound. Again, I can record the output live by using the record buttons. If you activate one record button but not the other, the recorded effect is rendered as MIDI and the unrecorded one remains virtual. 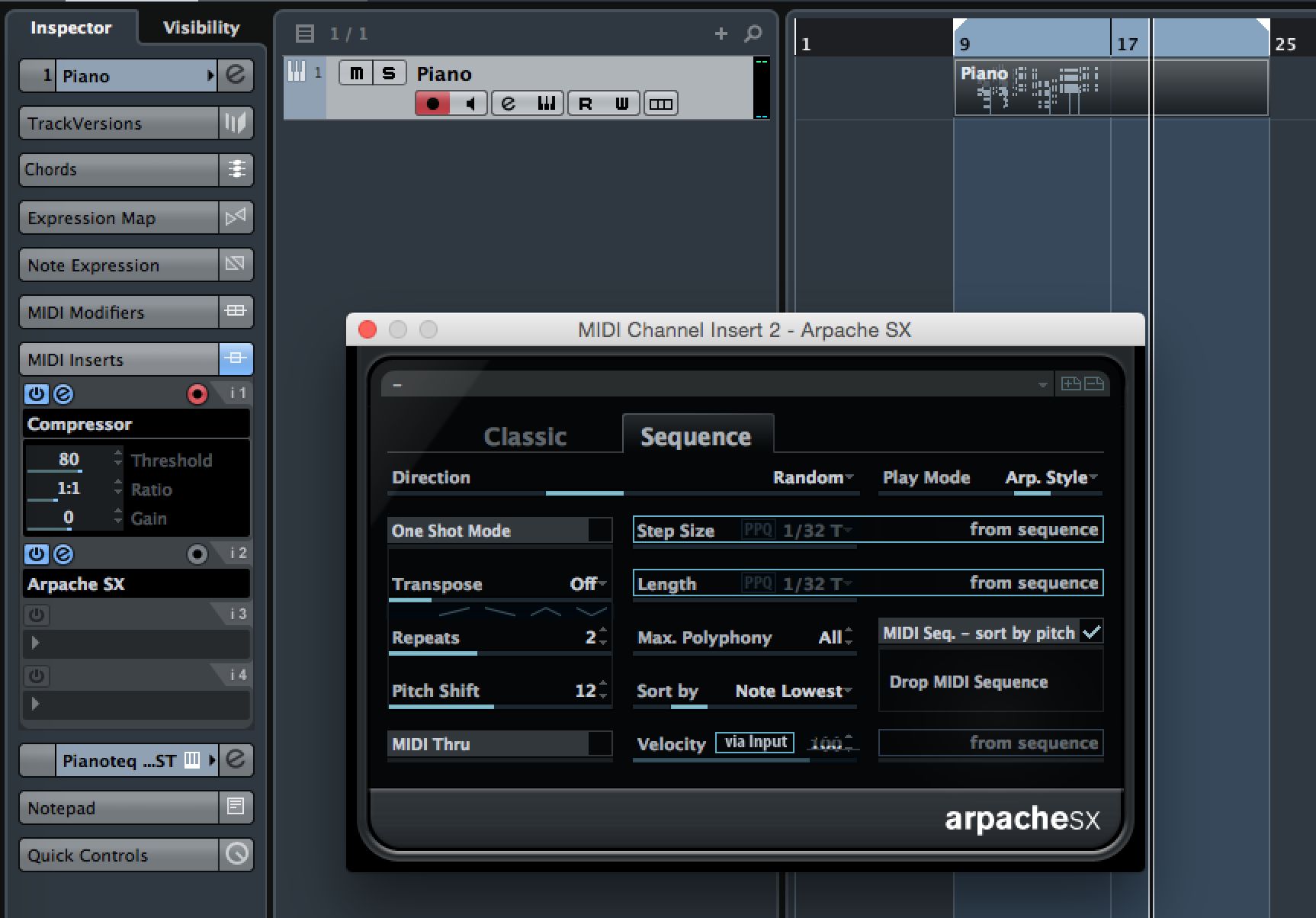 There are some pretty complex MIDI effects available but also some fun ones like Beat Designer. This is intended to give you a quick and easy alternative to Cubase's Drum Editor. Connect it to any virtual instrument capable of generating beats and you can put together some cool rhythms quickly without having to get too deep into MIDI programming. 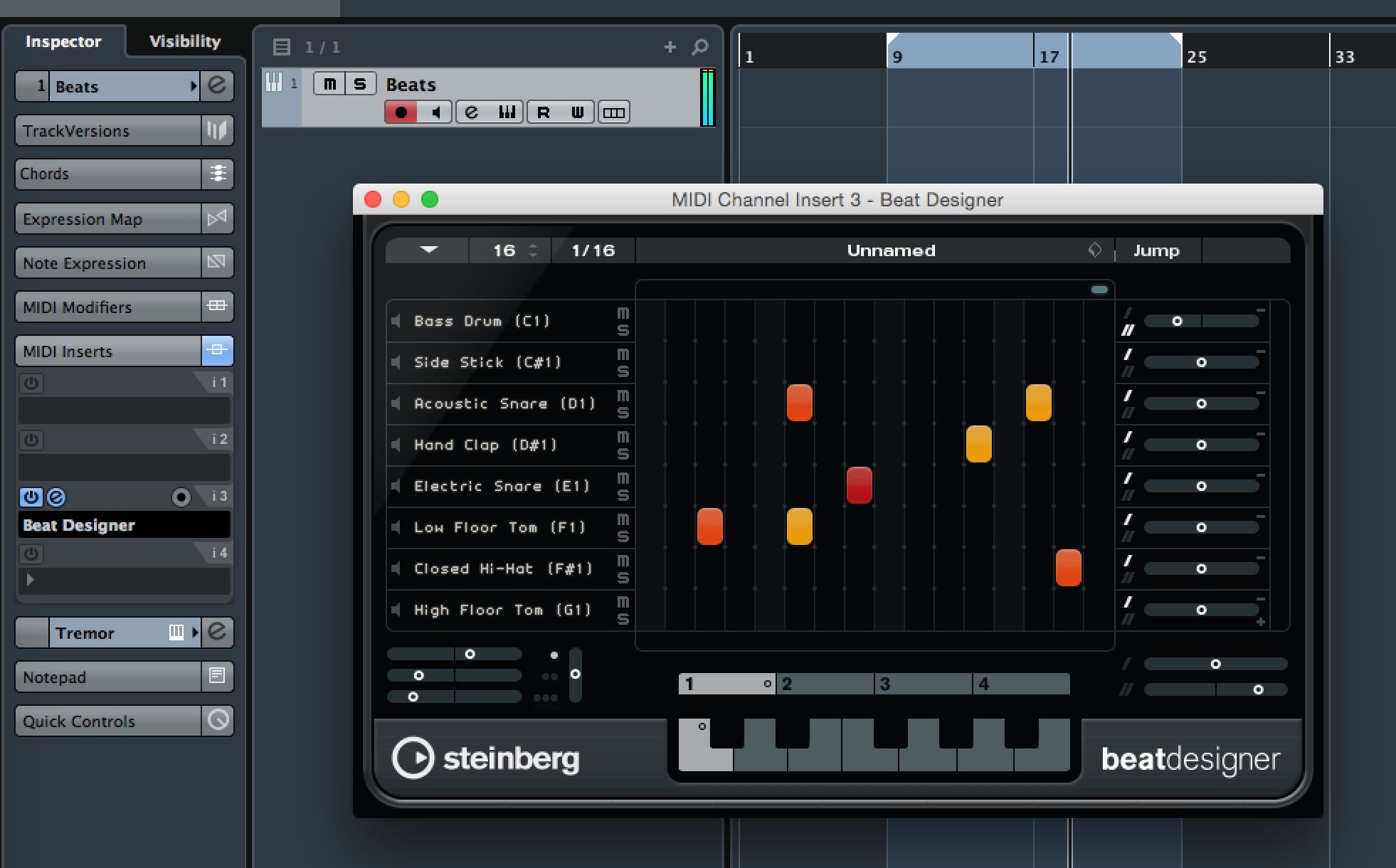