Language
In part 1/2 in this guide to microphones, Matt Loel T Hepworth examines the ins and outs of dynamic microphones and what recording tasks they are best suited for.

It cannot be overstated: Microphones are the most important components of any recording studio. Unless your musical productions are of completely electronic origin, you'll need microphones to capture the organic components like vocals, acoustic instruments, and the instrument amplifiers of corporeal (usually human) performers. Microphones are the ears of your studio; the sound waves they capture will be converted by your DAW into ones and zeros, and only when the finished product is played back will the air molecules bounce around to communicate the intent of the music to the end-listener. Do it right and the intent is easily understood. Do it wrong and the listener might end up confused, or even worse, disinterested. Therefore, choosing the right mic for each task is critical.

One of the most wonderful aspects of microphones is that they rarely become obsolete. You can use them over and over again and they'll consistently capture sound based on their design specifications. You'll get decades of use out of them. In fact, your mics might even provide you with generations of use. I still use a pair of my dad's very unique AKG D200E microphones, and they sound as good today as they did back in 1978. So unless you simply don't like a mic or no longer have a use for it, you'll rarely need to sell it, and the longer you keep it, the more value it will provide.

There are a staggering number of high-quality and very affordable microphones on the market today, which makes choosing one a somewhat daunting task. However, I'm going to give you a little knowledge to help you easily find mics that fit your budget as well as the task for which it will be used. In this article, I'll be providing you with examples of four popular microphones and compare them by (in no particular order) the following criteria:

Dynamic microphones are of very elementary design. Basically, a thin membrane (the diaphragm) is vibrated by sound waves. The membrane is attached to a small coil surrounded by a magnet. The small electro-magnet current generated by the vibrating membrane is then sent out of the microphone, down the mic cable, and into the microphone preamp of an audio interface or mixing console. Dynamic mics have very few electronic components, which tend to make them more affordable, durable, and reliable. (Note: Ribbon microphones are a more esoteric variety of dynamic microphones.)

But the most significant benefit of a dynamic mic is its ability to capture loud sounds without risk of distortion. The sparse compliment of internal electronics means there's nothing to overload, which is why they're often used on drums and loud instrument amplifiers. Perhaps the most ubiquitous example of a dynamic microphone is the Shure SM57. 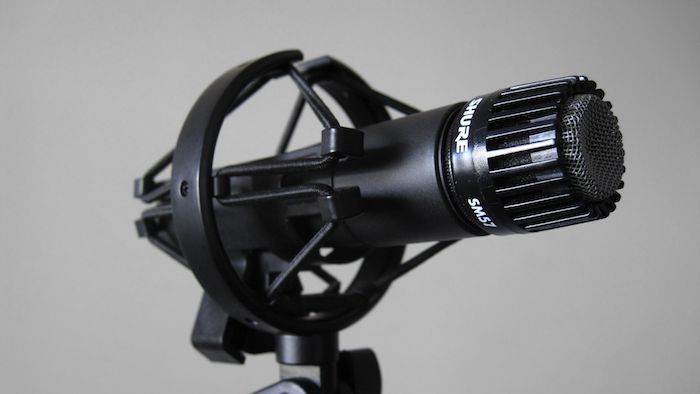 Released in 1965, the SM57 is one of the most venerable and popular microphones in history. It's a microphone that sounds good recording practically anything, and sounds great recording many specific things. Snare drum, electric guitar amplifier, trumpet, and alto sax would be well-served by the SM57.

Now let's look at the specs:

Human beings are capable of detecting sounds in the 20Hz to 20kHz range, so the SM57 can't capture all the frequencies to which humans are sensitive. However, frequency response is not completely representative of a microphones sonic character. The cardioid polar pattern means you have to point the mic directly at what you want it to 'hear'. Since it's a dynamic mic, the input SPL is a non-issue, and it's a mic practically everyone can afford.

The Achilles' heel of all dynamic microphones is low sensitivity, and the SM57 is no exception. Measured in negative dB Volts, the higher the number, the more sensitive the microphone. So at -56.0 dBV, some subtleties will be completely imperceptible by the SM57. For that reason, the human voice can sound somewhat constricted and less than intimate when recorded with a dynamic microphone.

However, that lack of sensitivity can be an advantage when employed properly. For example, humans produce more than speech when they're talking or singing. Nuances like lip smacks, the (hopefully) occasional slurps, deep breaths, and wheezes can be reduced simply by using a dynamic microphone. It is for that reason that many radio stations use more specialized dynamic mics like the Electro-Voice RE20 and Shure SM7B.

(Note: You'll notice that both of the dynamic microphones in this article are mounted in some sort of aftermarket shock mount. Most recording condenser microphones come with their own shock mounts. The benefit is a more isolated microphone free from microphone stand and floor vibration. So until someone invents a completely silent anti-gravity microphone mount that allows the mic to hover in mid-air, the next best solution is to put every microphone in shock mount.) 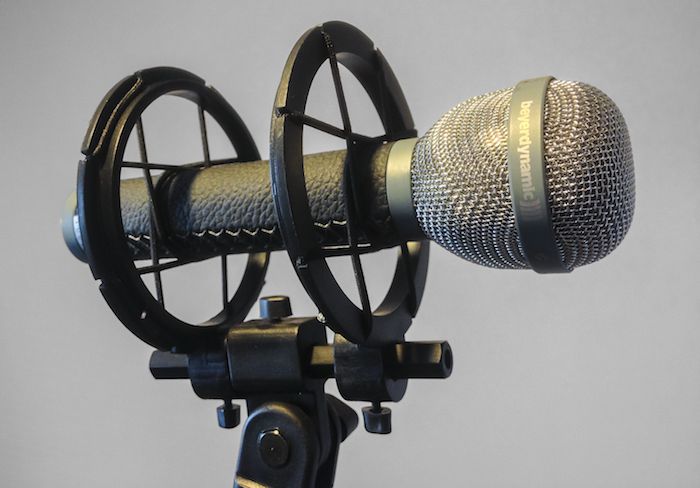 Like the SM57, the M88 is another dynamic microphone from the '60s. While not as well-known as the SM57, many engineers and performers have exploited the unique characteristics of the M88. It has a wider frequency response and is about 5 dB more sensitive than the SM57. Its design also uses an acoustic channel incorporated into the shaft of the microphone to boost the low frequency performance. While the M88 is designed as a handheld vocal microphone (a task for which it is well-suited), the rich low frequency characteristics allow it to work extremely well as a kick drum mic or for miking a bass guitar speaker cabinet.

Here are the specs of the Beyerdynamic M88:

The polar pattern is hypercardioid, which means the microphone is still directional, but has a more tightly focused pickup pattern. Hypercardioid microphones work really well in live sound reinforcement situations, wherein the mics might be placed only a meter or two away from the foldback monitors for increased gain before feedback. However, hypercardioid mics do not reject sound from the rear of the microphone as well as their cardioid counterparts.

The M88 is used as a live vocal microphone by many popular performers. For a time, it was known as the “Phil Collins microphone” because he used it for live vocal performance as well as studio vocals and kick drum. (The eponymous Genesis record is one example of the M88 used for studio vocal recording.) But I've used the M88 on guitar cabinets, brass and woodwinds, congas, and a variety of other instruments, and it always produces a pleasing result. While it is more expensive than many other dynamic microphones, its unique sonic characteristics make it a valued addition to any microphone locker.

Peter Schwartz
FanTAStic article. Learned things about these mics that have totally escaped me despite my many years in this business of making music. I hope Matt and Rounik will conspire to allow for additional articles on mics that go into exactly the same kind of detail.
Peter Schwartz
Ah, I see this is just Part 1. Yay. Can't wait for more!