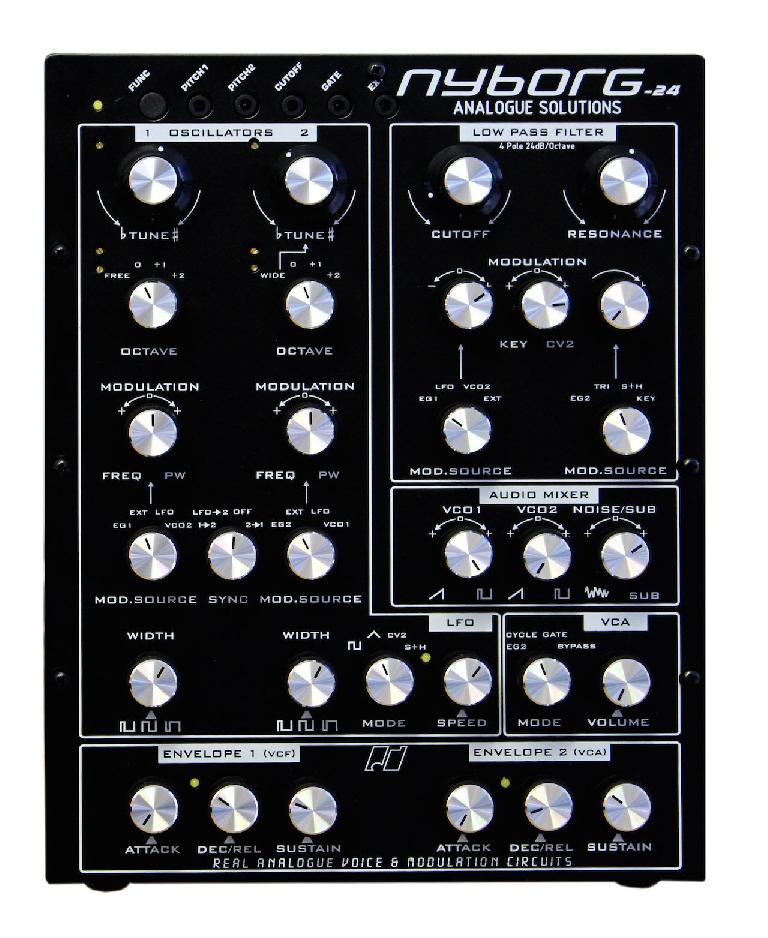 The appropriately-named Nyborg-24 not only looks different to its appropriately-named Nyborg-12 synth sibling — thanks to their obviously opposing front panel colour schemes, but also sounds different — thanks to sharing the same ‘Moog-style’ 4 Pole 24dB/Octave LOW PASS FILTER found in the company’s critically-acclaimed Leipzig-S analogue monosynth/step sequencer (whereas the Nyborg-24 shares the same ‘Oberheim SEM-style’ 2 Pole 12dB/Octave MULTIMODE FILTER found in the company’s Telemark semi-modular analogue monosynth). Moreover, it is what these form factor- and feature-sharing synths have in common that makes them stand out from the analogue renaissance crowd, constantly swelling in numbers as it is. Indeed, as they both proudly state on their black (Nyborg-24) and white (Nyborg-12) rugged steel/aluminium casings for all to see (and hear): REAL ANALOGUE VOICE & MODULATION CIRCUITS

See and hear an ear-opening ensemble of Nyborg-24s in full flight here:

But what does REAL ANALOGUE VOICE & MODULATION CIRCUITS actually mean? Meaningfully, then, apart from its high-quality 16-bit DAC (Digital-to- Analog Convertor) for MIDI (Musical Instrument Digital Interface) to CV (Control Voltage) conversion (which, by its very nature, has to be digital), like Nyborg-12 before it, Nyborg-24 is absolutely analogue through and through, hand built (by humans) using real transistors and op-amps. Unlike other so-called analogue synths you’ll find no CPU-stabilised and quantised circuits, DCOs (Digitally-Controlled Oscillators), digital LFOs (Low Frequency Oscillators), or digital EGs (Envelope Generators) hiding here, thank you very much! Instead its circuitry is based on tried-and-tested, distinctive- sounding designs dating back to the late-Seventies, so Nyborg-24 sounds suitably vintage in character — surely destined for much praise by Analogue Solutions’ loyal customers. Cast aside those bland-sounding digital synths and DSP-based soft synths and dial in Nyborg-24 whenever a full range of synth leads, basses, excellent-sounding electronic percussion, and all manner of subtractive synthesis-derived sounds are the musical (and not-so- musical) order of the day (or night)! 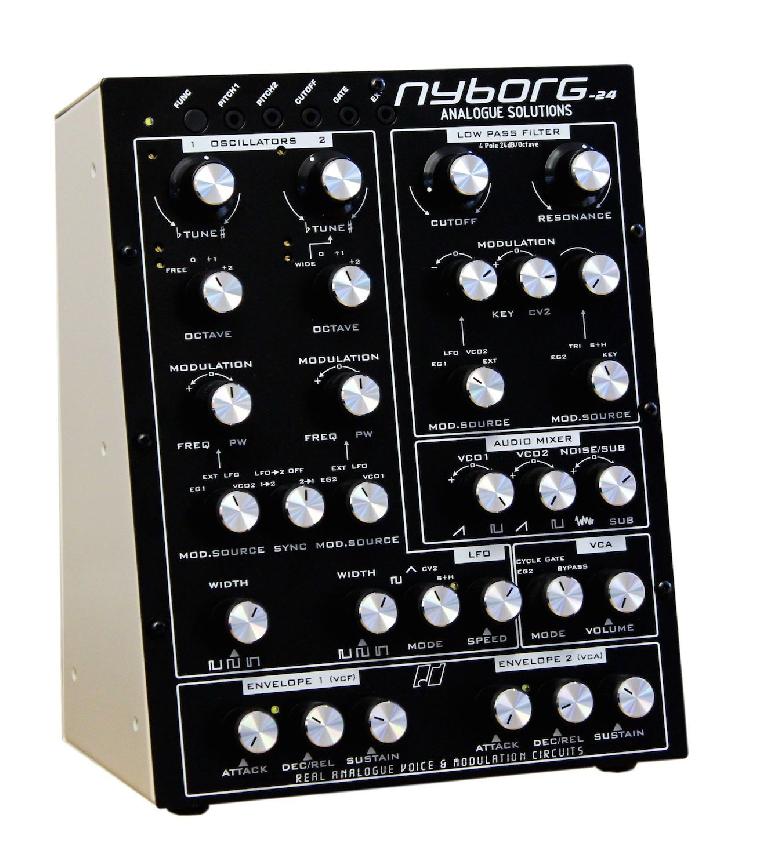 Speaking of dials, Nyborg-24 boasts an abundance of high-quality, smooth potentiometers, fully sealed against dust intrusion, together with high- quality knobs with spun aluminium caps — all as appealing to look at as they are to turn! Two super-stable VCOs (Voltage-Controlled Oscillators) — each providing a whole host of options and MODULATION sources — are available to start turning the most adventurous analogue musical dreams into reality. Thereafter, Nyborg-24 continues to follow the traditional, well-trodden analogue synthesiser signal path with its distinctive-sounding 4 Pole 24dB/Octave LOW PASS FILTER; AUDIO MIXER (VCO 1, VCO 2, NOISE/SUB); LFO (Low Frequency Oscillator) with triangle and square wave modulation signals and MODE switch to route CV2 (velocity control voltage) or S+H (Sample and Hold) signals to that 4 Pole 24dB/Octave LOW PASS FILTER or those VCOs; VCA (Voltage-Controlled Amplifier), controllable from EG2 or GATE with BYPASS option (allowing Nyborg-24 to be used as an external effects processor) and CYCLE setting (so the envelope is constantly re-triggered by the LFO, allowing for hands-off sound effects); and ENVELOPE 1 (VCF) and ENVELOPE 2 (VCA). As such, it should feel familiar to anyone with a modicum of subtractive synthesis skills... so much so, in fact, that reading of its accompanying user manual may only be necessary for finer operational detail: “Do not use a carwash or jet wash to clean this synth.” Surely as good advice as you’re going to get from anyone anywhere!

And speaking of communicating with the outside world, with an intentionally easy yet effective MIDI implementation — CUTOFF control of Nyborg-24’s all-important 4 Pole 24dB/Octave LOW PASS FILTER is available via MIDI velocity or a MIDI controller — and external CV (Control Voltage) sockets for PITCH1 (VCO), PITCH2 (VCO), CUTOFF (filter), GATE (to trigger the EGs), and EXT (for feeding an external CV to various circuits), DAW (Digital Audio Workstation) integration or working with an analogue step sequencer (such as Analogue Solutions’ own Oberkorn and recently-released Megacity) is a breeze. Better still, simultaneous MIDI and CV operation is possible, so users could, for example, use an Oberkorn to play a little melody then transpose that step sequence using a MIDI keyboard controller (or MIDI sequencer). Child’s play? Perhaps. 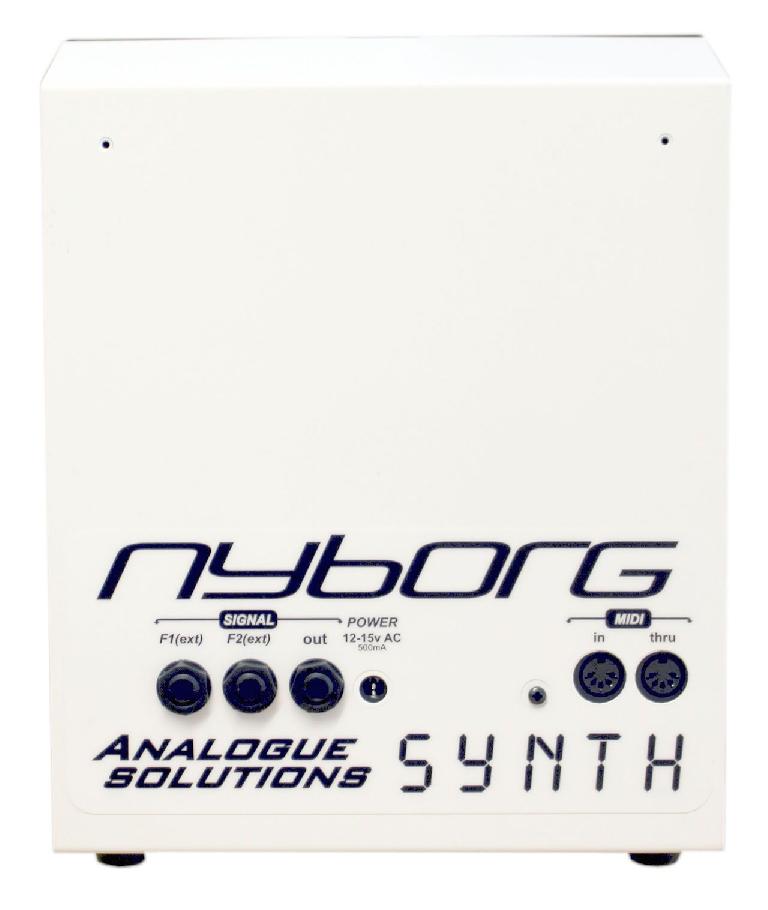 Rear view of the Nyborg-24

Note Nyborg-24 — like Nyborg-12 — can be user configured in various ways to save space to suit. Shipping as a vertically-orientated standalone monosynth module (much like its bigger brother, the Telemark), it is possible to rotate Nyborg-24’s front panel so that it can be used horizontally as a desktop device. Optional wooden side panels can be screwed to a single Nyborg-24 (from its inside so no ugly screws are visible) or to two Nyborg-24s that have been bolted together. It is also possible to rack-mount two Nyborg-24s that have been bolted together using the optional rack ears. (Of course, it is perfectly possible to bolt a Nyborg-24 to a Nyborg-12 and also rack-mount this perfect pairing for full filtering flexibility.) Either way, Nyborg-24’s modified software allows two Nyborg-24s to be poly-chained together to play as a single two-voice polysynth. Four-voice polyphony is also available upon request for those looking to really push the boat out and purchase four Nyborg-24s, though one Nyborg-24 is still a very versatile, super-sounding, space-saving standalone monosynth module in itself. One that will serve any adventurous analogue renaissance man, woman, or child well for many years to come.