Logic Pro's mixing capabilities just got a whole lot more flexible with the new Sends features available in the 10.4.2. update. Joe Albano shows you why they will make your life easier.

Even though it’s “only” an incremental update, Logic 10.4.2 includes several important new features, including a couple that address some long-time complaints abut the program. For me, the big ones are an (official) option to relocate the Sound Library to a HD other than the startup disk; Smart Tempo’s ability to work with MIDI as well as audio; and the subject of this article, two new Send-related features—a Sends to Channel Faders option and independent Send Pans.

For a long time, Logic was criticized by some users (especially Pro Tools users) about its implementation of stereo pans and sends, which had not been as flexible as in some other DAWs. Not too long ago, Logic introduced true stereo panning, an elegant solution to the first; now it’s added what Apple calls “Sends on Faders” to address the second. The Sends on Faders feature incorporates two components—the ability to set Send levels using the Channel Faders, and the option for Send Pan settings that are independent of the main Channel Strip Pan settings.

Prior to 10.4.2, Logic’s implementation of Sends was pretty good, but for some applications it did have a few glaring omissions. Naturally, most of the standard Send options were always available, and still are. For mixing, Post-Fader Sends typically feed Reverbs and Aux effects, while Pre-Fader Sends tap the Sends before the Channel Fader, to create an independent musician/artist’s Cue mix. There were always independent Send level knobs, but they’re quite small and you can’t really see the overall mix of Send levels at a glance; this may not be that critical with Post-Fader (reverb/effect) Sends, but if you were using Pre-Fader Sends to create an independent Cue Mix, the lack of visual feedback about that Cue Mix may have made the process a little inefficient.

Besides the less-than-helpful visuals, the big gotcha was the lack of independent Send Pan controls. The previous Send Pan choices either Sent the signal as is (as recorded), or you could choose an added (Post-Fader) Post-Pan option, where a stereo Send signal followed the Pan position of the main Channel Strip Pan—the Send followed the channel’s pan position in the main mix. Once again, this was usually ok with Post-Fader reverb/Aux Sends, but for creating independent Cue mixes it was another limiting factor. In fact, sometimes a musician or singer might request specific elements in their headphone mix to be panned to one side or the other for clarity—with the old Logic Send Pan options, this was a non-starter.

Both of the above limitations—small, cluttered Send knobs and no Send Pans—are addressed with the new Sends on Faders feature. While it is nicely done, the implementation may not be immediately intuitive; however once you know how it works, it’s easy to set up and use.

The Sends on Faders feature makes itself known with the addition of a power button and a menu in the Mixer pane header, just to the right of the three local menus—note that if your mixer pane is too narrow, it won’t be visible.

The feature is enabled per-bus; so if you have Send busses set up, you’ll see the Aux channel strips that are fed by those busses in the Send on Faders popup menu. Selecting one enables the feature for that bus/Aux; the power button toggles Sends on Faders on & off for the last-selected bus.

In my Logic Template I have four busses set up by default—the first uses Pre-Fader Sends, for a musician’s cue mix. The other three use Post-Fader Sends for reverb/Aux effects. Since setting up a Cue Mix is where the new Send features really shine, I’ll use Bus 1 as an example.

It seems yellow is the color of the day for the Sends on Faders feature (well, maybe it’s supposed to be gold, but it looks yellow to me). When you enable the feature, the names of all the Sends routed to that bus turn from blue to yellow. They don’t all have to be in the same slot—again, it’s a per-bus feature. Down below, all the regular Channel Strip faders (and pan knobs) disappear, except for the Master Stereo Out and the fader for the Aux/bus selected in the Sends on Faders menu; they’re replaced by yellow Send Faders, with the levels changing to reflect the current levels of the Send knobs above—in fact, the original Send knobs are still active as well.

Now you have a clear view of the Send levels feeding that bus/Aux, and creating/editing an independent Cue Mix—or visualizing and tweaking reverb/effect settings—is a piece of cake.

There’s another convenient feature: Clicking on any Send will pop up that channel’s Send options, where you’ll see a Copy Fader to Send command. 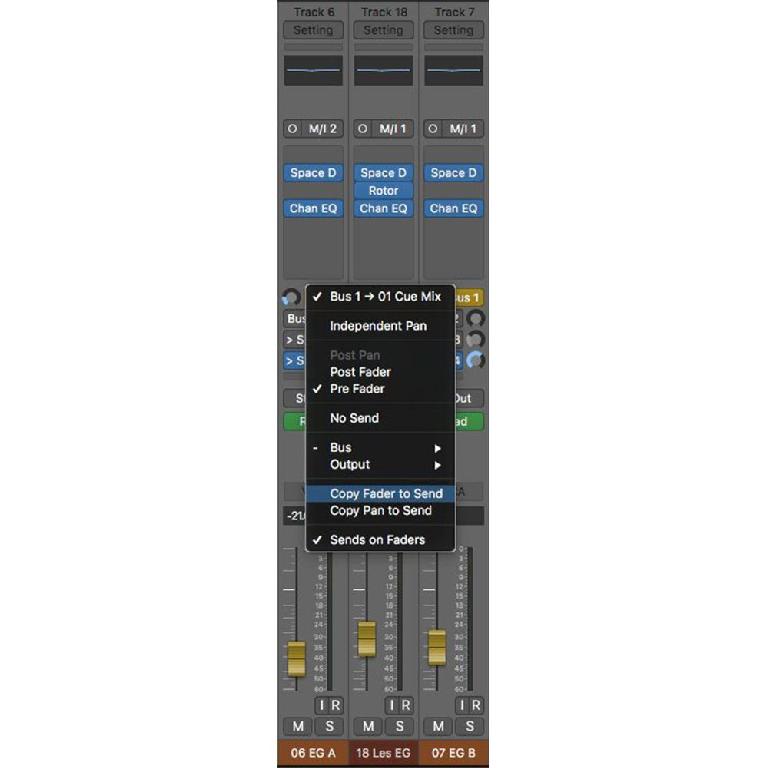 This is especially useful for creating a new Cue Mix—instead of having to use Post-Fader Sends which lack independence, or dial up an independent Cue Mix by hand, you can select all tracks and quickly copy the main mix to the monitor mix, and then tweak it as needed.

Along with this new Sends on Faders feature is the Independent Pan option. Independent Pan can be enabled on a per-Channel-Strip basis, though for convenience you can select all channels and enable/disable it for all tracks at once—it’s accessed by clicking on any Send box (it’s the same popup menu as above) and turning it on. 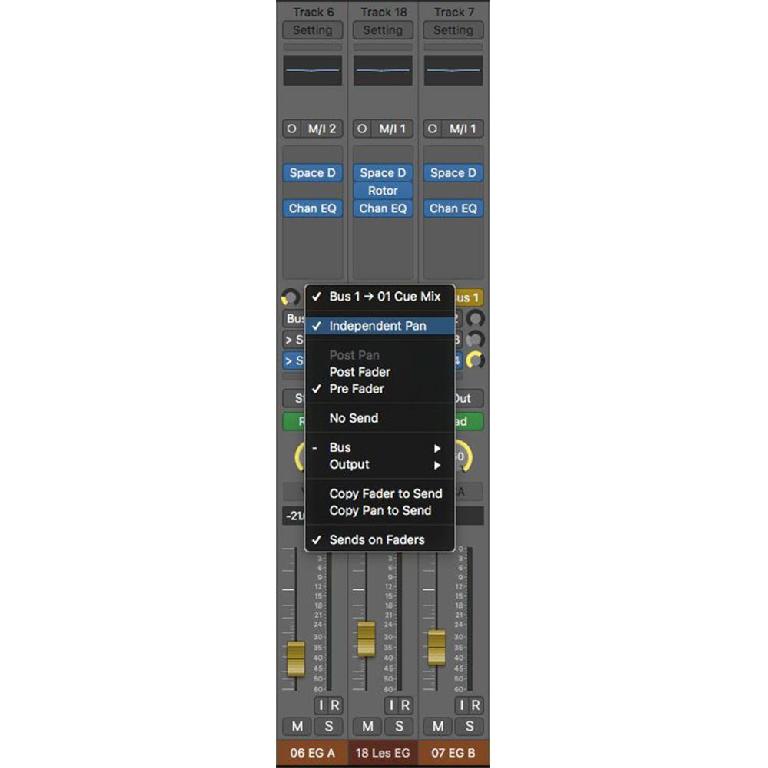 When Independent Pan is enabled for a Send in a Channel Strip, the Send knob turns from blue to yellow—this is the part that’s a little less-than-intuitive. You might think that it’s turned the regular Send Level knob into a Send Pan knob, but that’s not the case—the knob still controls Send Level, the yellow color is just a visual indicator to show that the feature is enabled for that Send/Channel.

Independent Pans on; Sends on Faders off

These are the Independent Send Pans, and you can even set the panner type—balance, stereo pan, surround—independently for them. For setup convenience, there’s a Copy Pan to Send command that works just like the Copy Fader to Send command, above.

Now you can dial up an alternate Send mix with full level and pan control, just as easily as dialing up the main mix. When you disable Sends on Faders, both the Send levels and Send panning dialed up will be retained and active—you’ll still see (and be able to edit) the Send levels on the Send level knobs (even if they’re yellow); you just won’t be able to see or edit the current Send Pan positions.

Despite a few quirks, Sends on Faders and Individual Pans are well implemented and easy to use. It took a long time, but with these new features—along with the recently-introduced true stereo panning option—Logic has finally gotten around to answering many critics of its mixing capabilities. Once you try out these new Send features, you’ll wonder how you got by without them.

Learn Logic Pro X 10.4.2 inside out with these video tutorials: https://ask.audio/academy?nleloc=category/audio/application/logic