Lists in Logic Pro X are an invaluable tool for editing, so why don't more people know about them? Matt Vanacoro gets to the heart of the matter...

Lists are an essential part of the Logic Pro X workflow. You can do so much specific and powerful editing using the lists window, it really surprises me when I run into producers and composers that never open it! While you can do quite a bit of editing in the arrange window, piano roll editor or score editor, those methods can often be a chainsaw compared to the precise ‘scalpel’ of the list window. Let’s have a look at the functionality built into lists and see how it can help you focus your workflow! 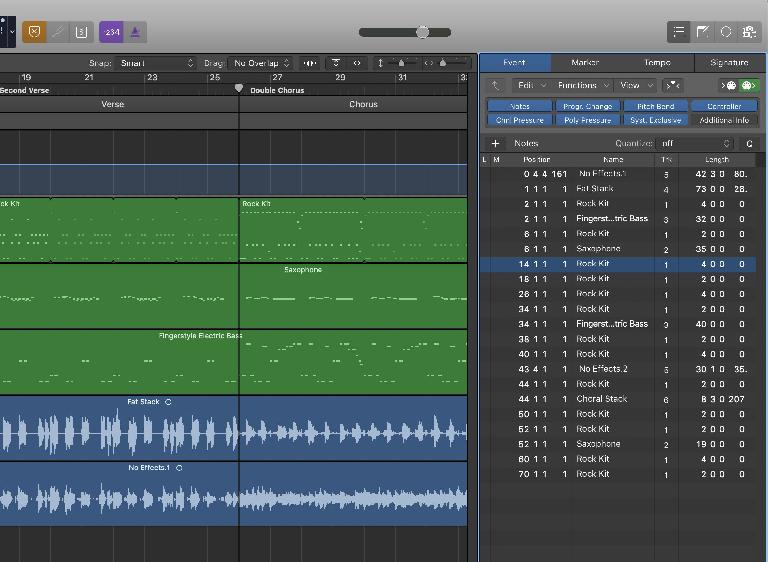 To open up the list editors, you’ll want to look out for that row of icons in the upper right corner of your Logic Pro X screen. The list editors are typically the first icon you see in that row. You can also press the ‘D’ key on your keyboard if you have the default keyboard shortcuts active. The first list that will typically come up is the ‘event’ list. Think of events as occurrences that are documented via MIDI. These events can be note on/off commands, but also pedal commands, polyphonic pressure, program changes, system exclusives… just about any MIDI message you can think of! 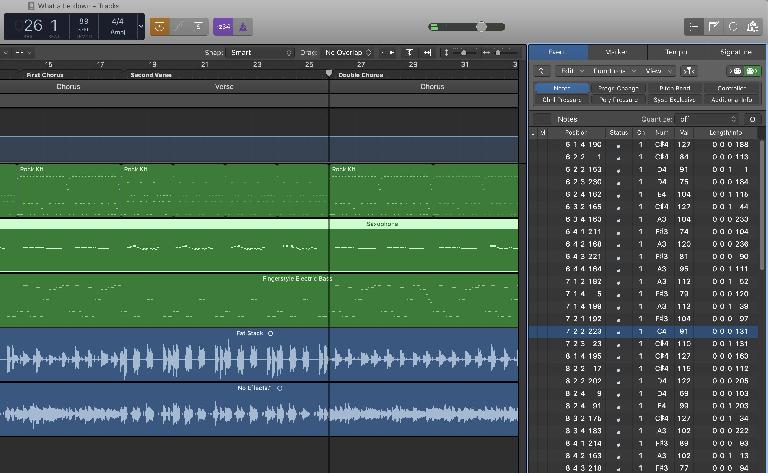 The event list window is where you can make some precise and important changes to your MIDI data, but as you can imagine, there’s likely a LOT of MIDI data in your song. That’s why you can filter out data and only view what you need to view pretty easily. First of all, the event list will only show the latest region you have clicked on or selected in the arrange window. This cuts down on having to view thousands to tens of thousands of MIDI messages all at once.

Also, you can use the filter selections up at the top of the window to further narrow down what you want to see. I do this all the time whenever I want to edit or delete controller data. Did you like your clavinet track you recorded but think that the wah pedal automation you did needs work? Or maybe you didn’t sweep the filter with your polyphonic aftertouch on a synth in the best way? You can enable/disable the MIDI filters to show or hide various aspects of MIDI in your piece and select only what you want to select for editing/deletion. I can’t even tell you the number of times I’ve used the MIDI event list to get in there and quickly delete a rouge sustain command! It’s just so quick! 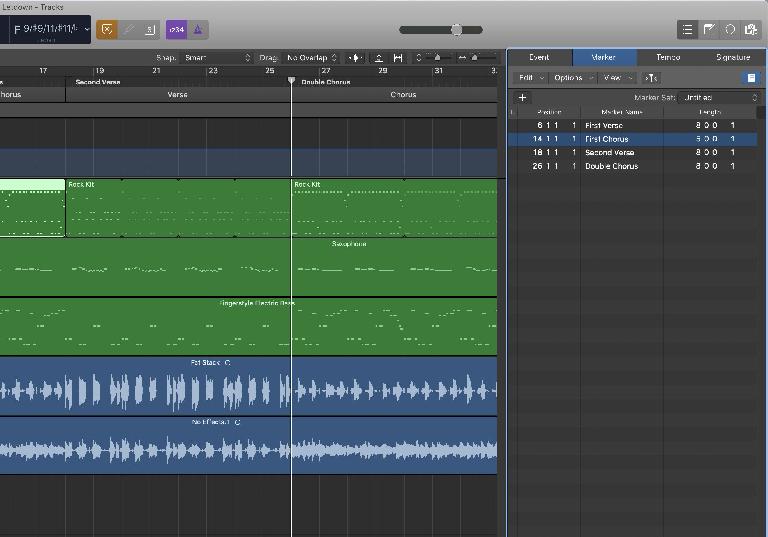 The marker list is definitely an important one if you’ve integrated markers into your workflow. Markers allow you quick access to various parts of your project during playback and editing, and they allow you to quickly jump to different areas of your arrangement.

First and foremost, having the marker list opened up allows you to quickly create a new marker with the plus button to the upper left. When utilizing this new marker button, a new marker will be created wherever the playhead is. You can then edit the marker in the marker list without having to drop down all of the global tracks. You can rename the marker, adjust how long that section should be, and re order as needed. Once you’ve used the marker list to set up a bunch of markers for your project, you can even set up key commands to jump to the next/previous marker utilizing buttons on your MIDI controller! This allows you to get to different areas of your arrangement without taking your hands off of your MIDI keyboard.

You can, of course, utilize keys on your computer keyboard for this as well, or even the drop down menu. Since your markers are numbered, even when you give them custom titles, you can utilize the ‘marker number’ command to go to a specific one if you happen to know it. 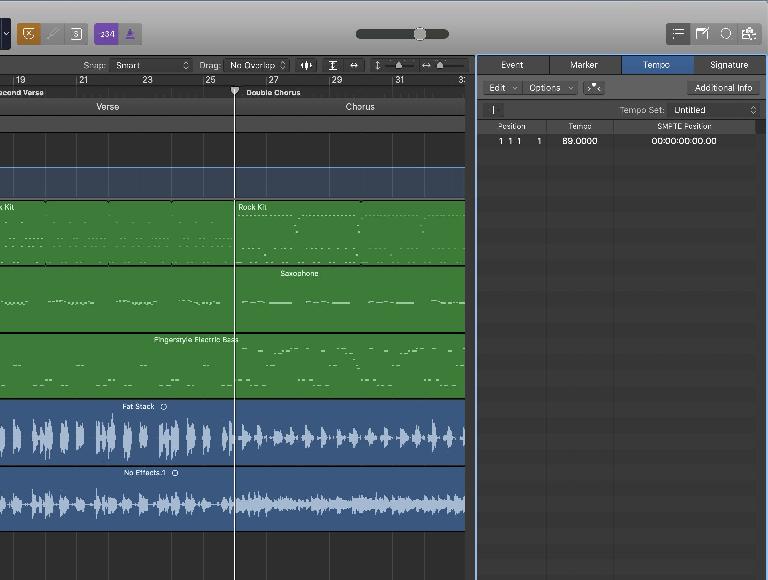 Projects with multiple tempo changes can be a beast to manage. Using the drop down global tracks window can allow you to get a good visual representation as to what tempo changes happen throughout your project but the tempo list can be incredibly helpful as well. I often find that it’s easier to ‘fine tune’ where tempo changes might happen using the tempo list.

You’ve got a create button there as well, and that will allow you to insert a new tempo at the current playhead position. I find that with monitors nowadays, I’m often looking for more vertical screen real estate than I am horizontal (I have an ultra wide monitor) so opening up the list window on the side is preferable to me compared to leaving the global tracks dropped down the whole time. 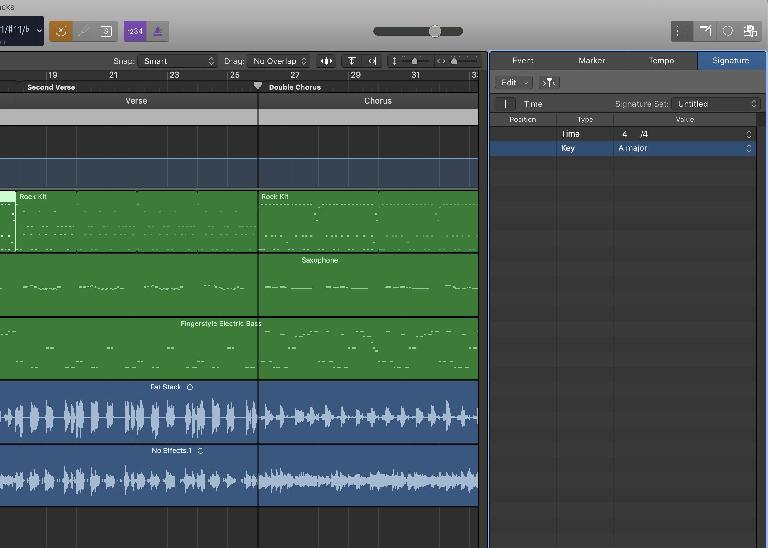 The final list type available in Logic Pro X is the signature list. This list encompasses both key signatures AND time signatures. So if your piece shifts from A to D minor, here’s where that would be reflected. If your song switches from 4/4 to 5/4 at some point, you’ll want it to show up in this list. You can use the plus sign to add a new tempo event at the current playhead position. If you’ve got advanced tools enabled, you can also utilize signature sets. This holds true for markers and tempo as well. Sets can be incredibly useful!

Sets are groups of events in the event list that allow you to try out alternate ‘configurations’ of these events. Imagine you create a slow down around measure 30, then speed up again at measure 40. Now you want to try out an alternate version of your song where you speed up again at measure 35 instead. Using sets allows you deep customization of the events, and you can quickly switch back and forth between options. This is way better than completely redoing a set of tempo events each time you want to try something different. You can keep your original tempo changes intact while experimenting with something new!

By now you can see how powerful the event lists can be! They don’t just show you what’s going on in your project, event lists are the very life blood of your song and allow for deep customization of how it sounds.