Language
The Trap music genre is constantly evolving... and in his second tutorial on this musical style, G. W. Childs shows you how to make Trap style drum fills in Propellerhead Reason with download project.

If you followed along with the last trap music tutorial that I did, you now know how to get those intricate trap hi-hats programmed with those 32nd and 64th note shuffles. And, you also know how to set up a basic beat, which is basically a regular old hip hop beat.

In this tutorial, I'm going to focus on another defining characteristic of trap music drums, these being drum fills.

Trap Fills, and how they are different...

If you listen to many of the bigger trap hits that are out there, you'll notice that there's always a drum fill at the end of the 2nd, or 4th measure that sounds very similar to a drummer going from a hi tom, to a mid tom, to a low tom. It's usually very quick and really isn't that hard to set up. But, there could be a little confusion about what drum sound to start with in order to get that same sound.

Generally, when it comes to trap music, I'll set up a separate Redrum that is specifically for fills, and sound fx. Once set up, I'll usually send many of these particular sounds, on their particular Redrum channels, to individual audio tracks, so that I can process them individually, and so on.

For the moment, let's just start with setting up the Fill Redrum, as we will soon be calling it. But, before we move any further, let me reacquaint you with the drum beat we were working with in the last tutorial.

Okay, on the Fill Redrum, let's first label it as Fill Redrum. This may seem silly, but as your Reason rack grows, any waypoints and reminders come in really handy. Once labeled, let's start digging through the Reason Factory Sound Bank so that we can find a suitable starting drum for our fills. I'll press the Browse Sample button on Channel 6 in Redrum, which will bring up the Reason Browser.

I'm choosing 6 because it maps directly to the F1 key on my MIDI controller. This is important to me because it's the same key that toms are mapped to on a General MIDI kit, and the same mapping most other drum modules, be they hardware, or software, will be mapped to as well. This means that if I ever decide to export this MIDI into another DAW, or use a different drum module, the tom programming will automatically match up.

Meanwhile, back in the Reason Factory Soundbank, I'm going to navigate to the Redrum Drum Kits folder, and then choose the Xclusive Drums Sorted folder, which has the kicks, snares and so on broken down into individual folders. I find this much easier to find specific types of drum sounds, when I get to go through a big list. You'll get that here. 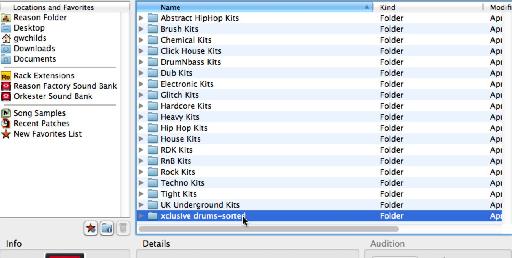 Within the Xclusive Drums Sorted folder, choose Snares and locate GiantStep.wav. This is more of a hollow, acoustic snare drum sample that is perfect for what we're going to be doing. 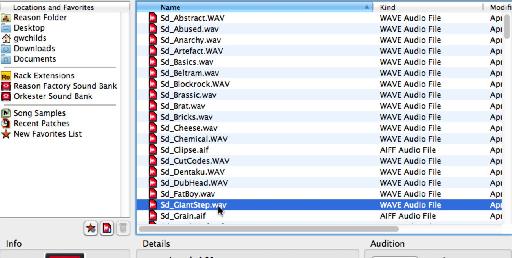 Alright, if you play F1 on your MIDI controller, with Redrum selected as your MIDI destination, you should be hearing a nice sounding snare drum. But, wait! Aren't we doing toms?

If you listen to a lot of trap beats, you'll actually notice that the drum roll tends to be the same sample, just pitched down. And, we could use automation and free up two channels that we would otherwise use for the mid and low tom. But, this is Reason: we've got unlimited Redrums! On the current drum channel that we just set up, set the Pitch to 22. Doing this will give us that hi tom we need for the whole collection. 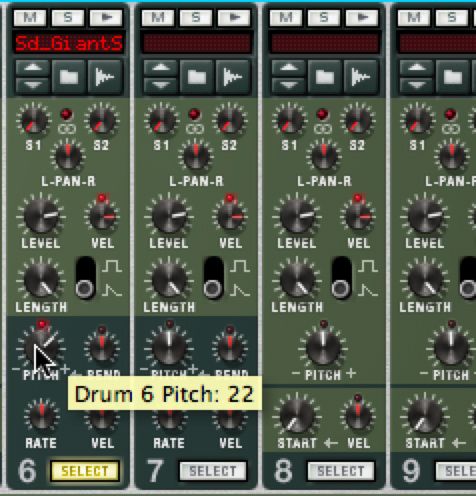 I'd also recommend setting the Pan of this channel slightly  to the left. After all, you want your drums to move around in the mix. If you're sweeping down drums of different pitches, having the Pan adjust along is a nice bit of polish. 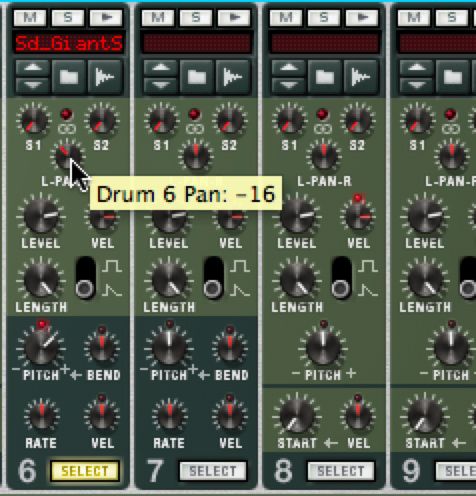 What about the other toms, or snares?

Next, let's set the next two samples up for our drum roll. On Channel 7, navigate back to the same Xclusive Drums Sorted/Snares folder and select the same drum, GiantStep.wav, again. Except on this drum, we'll keep the Pitch where it is. This, in turn, leaves us with a mid tom. The only thing I'd suggest is panning it almost in the center, but a little bit to the right. Try 12. 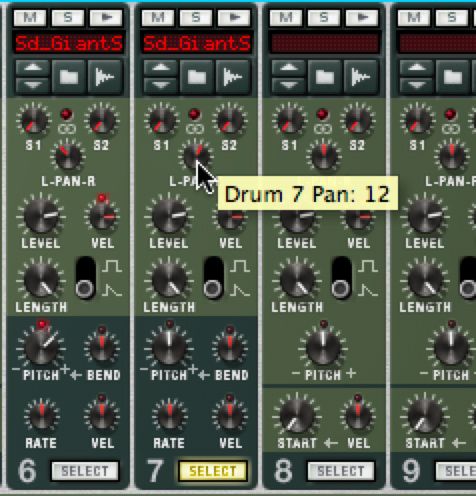 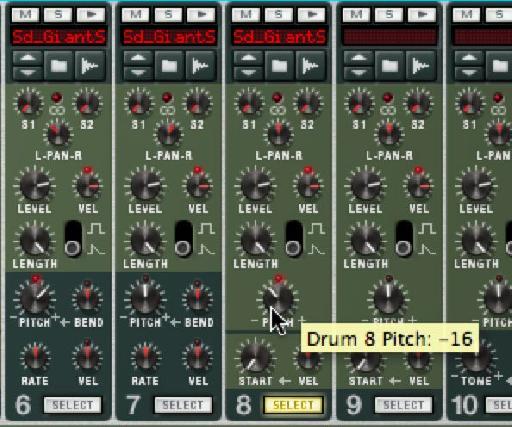 We'll also want to pan this drum even farther to the right, at 24. This ensures that toms will pan from right to left, or left to right as you play them. This keeps you from having to automate later, too! 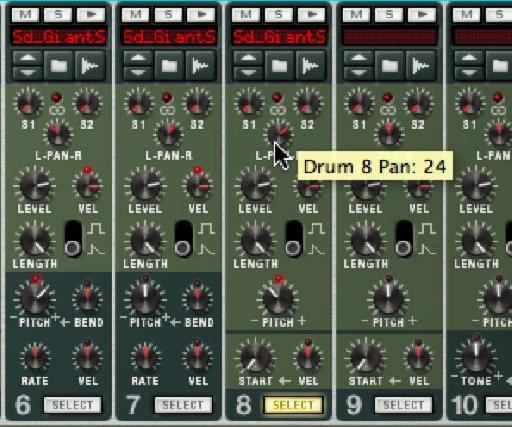 There are a few ways you could go with programming, from here. You could go with the Drum sequencer that's built into Redrum, and set up several different patterns of fills, as well as snare grooves. Personally, I'm a little more into using the regular sequencer. Let me show you some of these fills as they appear in the sequencer.

With my Fill Redrum selected in the Sequencer panel of Reason (F7), I'll go into Edit mode using the Command-E short cut. While in this view, I'll use the Pencil tool to create an empty clip, which will run along side the drum beat we did in the previous exercise. 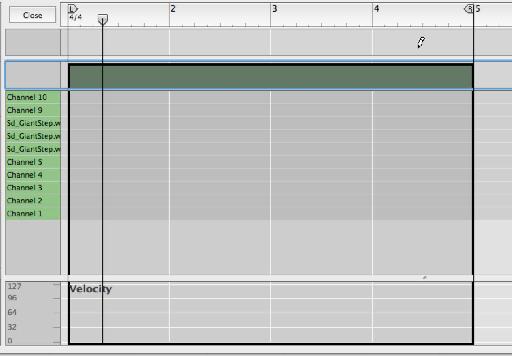 I'll now sprinkle in some of the pitched snares that are coming from my Fill Redrum. To do this, I'll use the 1/8t setting of the Snap, in the Reason Sequencer. At this resolution, I can simply draw in multiples of threes towards the end of each 2, to 4 measures. I can also sprinkle in random snare hits, as well, to make my drums sound more like I'm using a real drummer, when I'm not. Keep in mind, you don't have to use the 1/8t resolution for the whole drum loop. Feel free to mix in some 1/16 and 1/32 note variations. 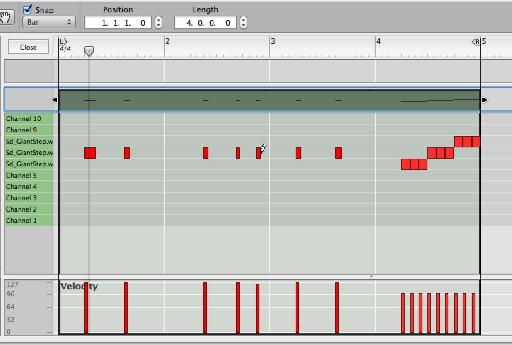 Keep in mind, this particular trick was in vogue around the time I wrote this tutorial. Trap is a new, and evolving genre. This type of fill may not continue to be used for a long time. But, the steps to do it are very helpful, and could very well assist you in creating bigger, better and cleverer drum kits of your own, as well as up your programming chops. Try experimenting with what we've done here. You may surprise yourself with what you come up with!