Language
Interested in getting the perfect setup for your guitar? There's no need to stick to either a pure analog or pure digital rig when you can have the best of both worlds. Andy Bowen explains more.

I recently put together a list of tips for tracking guitars with little to no hardware and it got me thinking… There are plenty of benefits to digital effects and controllers, and there are plenty of benefits to analog stompboxes, so what's to stop someone from melding them into the ultimate super-rig? Absolutely nothing! In fact, many, many artists and studioheads have beat me to the idea. Real-time automation; limitless effects combinations; extreme portability—It's all right at your fingertips. So if you're interested in exploring the possibilities, here are a few scenarios that will get your creative juices flowing. 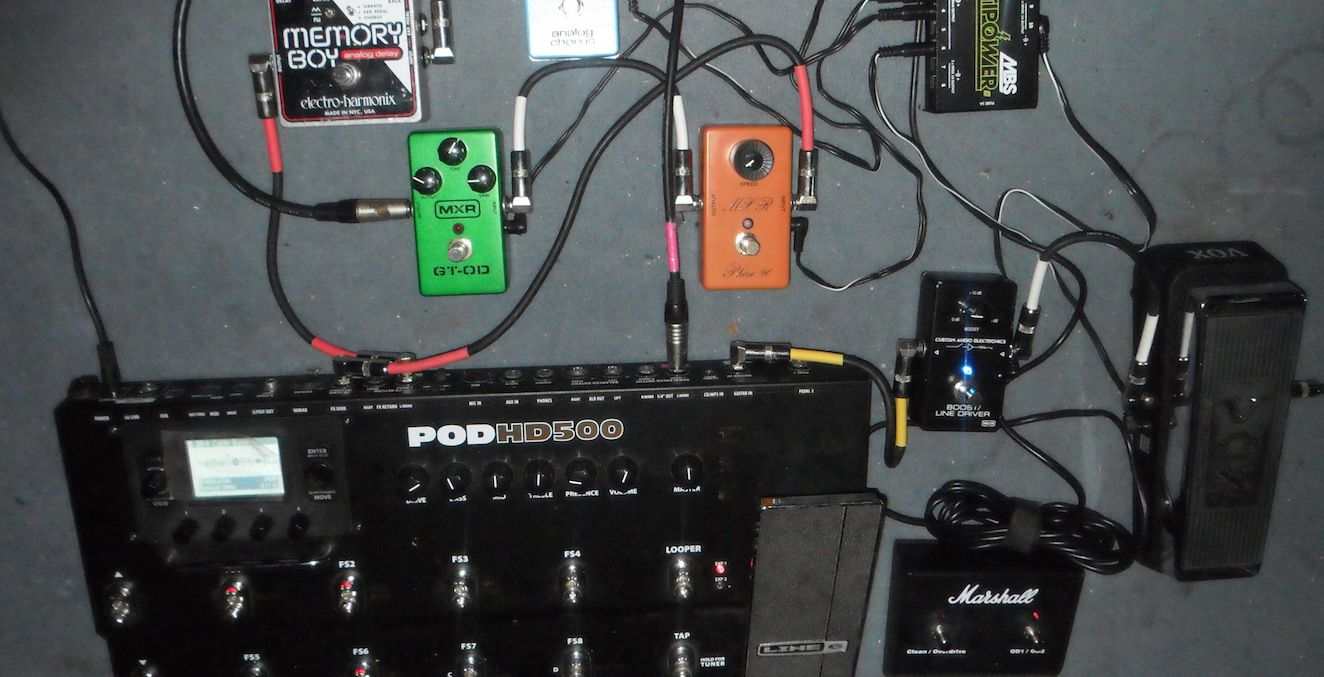 The POD: A portable, well-built, effect-filled piece of gear I've grown to love over the last eight years. My all-time favorite feature, though, is the FX return. Overdrive is an effect that, in my mind, tends to suffer most from digital modeling. To deal with that, I simply patch my analog board in and rarely ever use the POD's onboard effects. Not only does this arrangement give me tons of versatility; it adds Master/Slave control for MIDI-enabled stompboxes. There are a few creative limitations (like where the FX loop lies in the signal chain, and the fact that it can only be initiated for one tone at a time), so depending upon your setup, delays and mods might not be a suitable fit. Regardless, the FX Return is a feature that every POD owner should play around with.

For starters, let's imagine Ableton Live at the tail-end of a signal chain, which is how Depeche Mode recreate its sui generis drum sounds for live performances. You'll need an audio interface, but the effect, VST, and routing combinations are infinite—not to mention the possibilities with hardware controllers like the Novation Launchpad. Here are a few ideas to get you started:

Real-time automation during a gig: Sync Ableton up with your tracks DAW and all your post effects can be fully automated. I'm not just talking about turning a delay on or off either. If you want to go crazy, draw envelope automations for VST effects or instruments—just like you do when mixing a record—and apply them to your live signal. It takes some serious know-how, but the results can be incredibly cool.

Use Scenes for complete rig changes: If you're familiar with Ableton, then you already understand just how useful Scenes can be. Pack each one with effects for a specific song and you can load a completely new rig (well, almost) with the press of a button.

Incredible live spatial effects: Like I mentioned earlier, real-time stereo sweeps and stutter effects are both possible with live audio. In addition, though, you can utilize the DAW's sends and returns for additional creations, like a manually toggled reverb or mod.

Recording your live performance: Not only can you utilize Ableton's digital magic to improve your live show, you can record it in the process too. Throw an extra audio track in there and boom, you're all set. 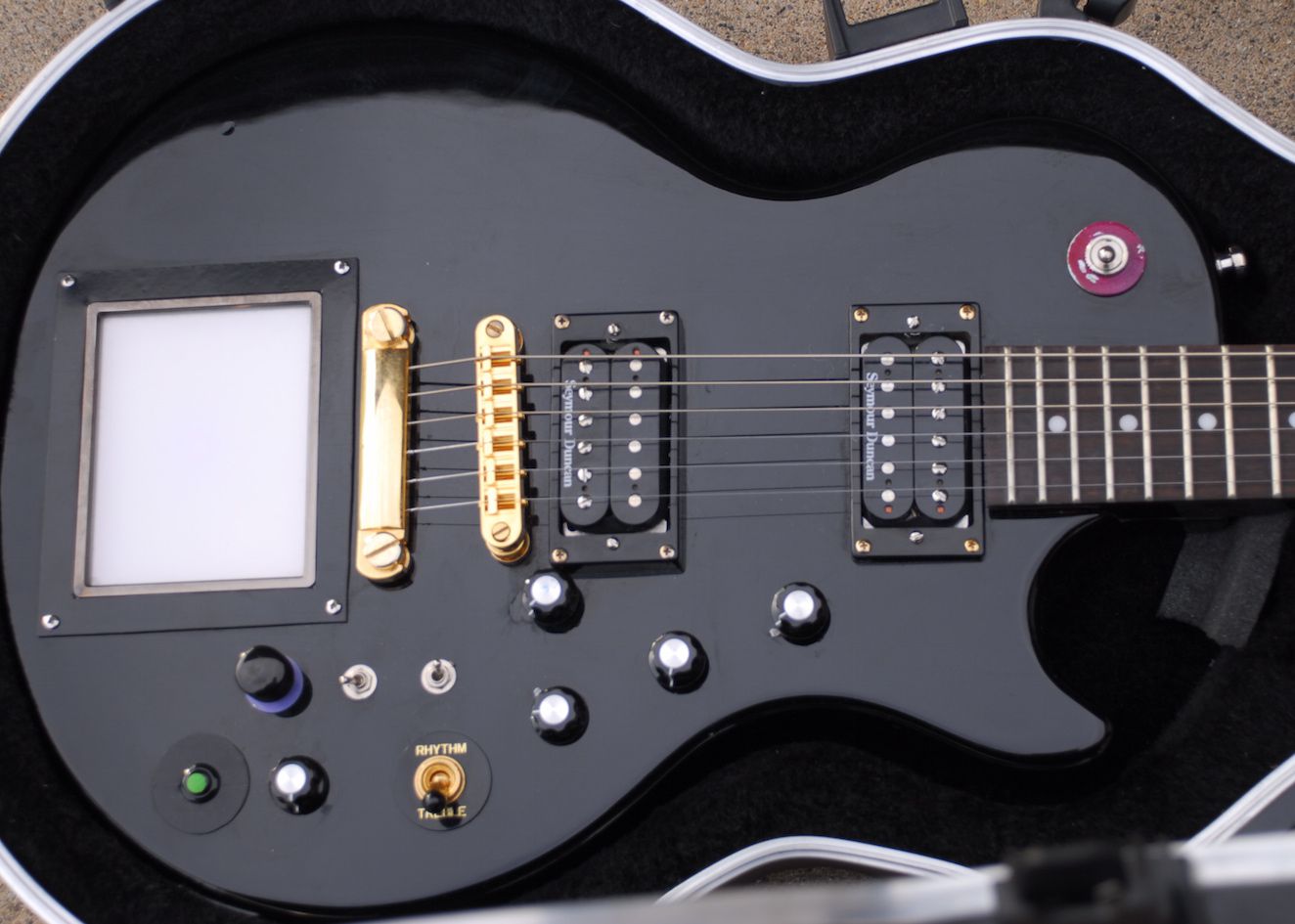 Korg's Kaoss Pad is responsible for some of the wildest, animated guitar solos ever. Take Matthew Bellamy of Muse and Drew Shirley of Switchfoot for example—the former even has one built into his axe. The device accomplishes some crazy modulation effects thanks to a touchpad embedded in the center. However, one hurdle that guitarists will face is that you can't control it with your feet (unless you have a well-trained big toe). That leaves owners with two real options: mount it on a mic stand or set it on a table side-stage like Drew.

The most obvious advantage to digital effects rigs is versatility. Any effect (or group of effects) can be called up at any time, in any order. To accomplish that with strictly analog hardware would require an insane amount of wiring. Thanks to digitally powered analog switchers like the Voodoo Lab GCX Guitar Audio Switcher, though, you can utilize the benefits of digital modelers while preserving your raw audio signal.

This scenario is a bit peculiar, but if you're a JamUp or AmpliTube user that likes to run direct (straight into a non-amp input like a mixer or monitor board), you've probably dealt with impedance issues in the past. MOTU's Zbox eliminates that problem, allowing you to get the beefiest, most powerful tones possible out of your iPhone or desktop modeling software.

Penta Spica
For me: