Making the Most Out of Guitar Effects In The Box

Language
Rich Tozzoli takes a hands-on approach to using guitar effects in the box to find out which plug-ins will help you transform your guitar sounds from dry and uninspiring to rich and varied.

Effects are an important part of any guitarists' arsenal, be they on the road or in the studio. However, the nice thing about working with software effects in your DAW is not only the wide variety of choices available, but also the ability to '˜tweak' them while playing back your track. Let's take a look at a few different ways to get the most out of your guitar effects inside the box.

For chorus, I'll turn to the Universal Audio Roland Dimension D. Based upon the classic late '70s Roland hardware unit, it doesn't get much easier to use. Working in either mono or stereo (I recommend full stereo), it features only four push buttons in the Dimension Mode section. The intensity of the effect increases as you push each button (from 1 through 4). But by pressing the Shift key on your computer, you can select and engage multiple buttons at once. Note that by selecting the Mono/Stereo button, the chorus effect will be in mono (if selected), even when using a stereo version of the plug-in.

I recommend this to add a nice enhancing chorus sound to a steel string acoustic guitar part. But I also like this effect when using single coil guitars such as Strats or Teles. It's not overwhelming, but just enough to add that little bit of shimmer.

Get back to the '70s with the Dimension D plug-in.

Reverb is certainly another all-important guitar effect. But often, it can be overdone. One of my favorite tight room verbs can be achieved by using the Sonnox Oxford Reverb. What separates it from other is not only the high-quality sound, but also the built in EQ. By clicking on the Equaliser tab, a 5-band EQ section pops up, allowing for low and high pass filtering, as well as low, mid and high fully parametric EQ.

Here's why the EQ is so important. Not every guitar sounds great in the same reverb. So what you can do is accentuate the frequencies of the room that you want to shine through in the mix. For example, with a bright acoustic guitar with maybe some string squeaks, you can pull down the high frequencies of the reverb so as not to make them too aggressive. Also, you can cut some of the midrange frequencies of the room reverb, and even boost some of the lows. This lets you custom tailor the reverb room tone to fit perfectly in the mix. Note that you can of course do the opposite, brighten up the reverb for a guitar with dead strings, etc. It's a highly flexible tool for reverb production. Thanks to its EQ section, the Sonnox Oxford Reverb is a versatile plug-in.

Ah, since you can never have enough reverb on our guitars, let's turn to Audio Ease's Altiverb. This reverb plug-in plays back the impulse responses of real acoustic spaces and hardware. These are not mathematical models'"they are the real deal. So for guitar, I turn to the Gear > Plate, Spring and Digital menu. When recording DI guitars through amp simulator plug-ins, I will put some Altiverb spring reverbs on it.

Adding a touch of Magnatone 480 or BX22E spring reverb will give it added depth and reality, almost like you were tracking through a real amp with a good verb on it. One trick that I do is pan the stereo reverb directly on top of the mono guitar, so that it sounds like a miked up amp. Or I will widen up the reverb spread and open up the sound field with a good spring. It all depends on what type of sound the track is calling for. 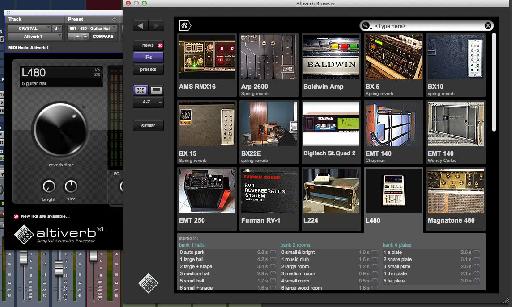 When it comes to impulse response reverb plug-ins, you can't go wrong with Audio Ease's Altiverb.

Ok, sometimes our guitar tracks don't need to have a spring reverb or a room sound on it. Sometimes, you need a huge ambient soundscape that would make David Gilmour proud. That's where Eventide Blackhole comes in. Based on their Blackhole pedal, this plug-in is what I turn to for the big sounds. There are some great presets that you can scroll through to get some sound design like tones, but I tend to use the Dreamscape one with about 50 ms of predelay and the Size set to 55. Since I run this on an Aux track, I will have the Mix set to 100 and use a bus send to vary the amount sent to the plug-in. Often, I will pull back the Low and High frequencies, as this reverb can swim in a mix (in a good way), but the lows and highs can get in the way. Just playing through this sound can inspire creativity. 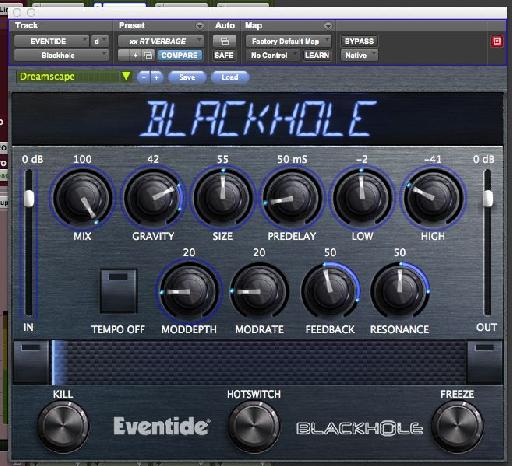 Defy space and time with the Eventide Blackhole plug-in.

Sometimes, reverb is not the thing to vibe out your guitar track. That's when I turn to SoundToys Tremolator. This tremolo and auto-gate plug-in can emulate the trem sounds of old Fender amps and Wurlitzer electric piano, but also can do a lot more. This thing can be fully customized to fit the track at hand, as you can either keep it simple, or get complex. To time the tremolo effect to your tempo, you can either tap the tempo using the Tap Tempo button, or lock it to the BPM's of the session by turning the MIDI switch on. There's also a useful Rhythm menu available that lets you select the Rate setting based upon bars, beats or note values. So you can either set it to modulate fast or slow, based upon the song's tempo. The Tweak menu opens a small '˜rack' with additional Dynamic Control options including Width, RateMod, DepthMod, Threshold, Attack, Release and a Gate/Envelope switch.

Usually, I don't have to go crazy to get a great sound out of this. Recently, I had a guitar track that was cool, but a little sterile in the mix. When reverb didn't make it any better, I called up the Tremolator. Sure enough, that was the mojo it needed. Now, when I hear that track back, the trem is my favorite part to hear.