Language
You might not reach for the Korg Volca Keys first to make arpeggiated bass lines but, as G.W. Childs demonstrates, it's an excellent choice for the task and is fun and easy to use.

For a lot of people, Volca Bass is the end-all-and-be-all of analog, bassy, goodness, for the Volca lineup. Because of its big sound, and its ability to merge multiple, fat, detuned oscillators into one destructive tonal wall. It's hard not to argue. And, indeed, it's true, the Volca Bass really does rule the bottom end. But, Volca Keys does a wonderful job of filling in everything, in between. And, unlike Bass, it has an extremely cool, built-in delay, that makes it perfect for arp-ish basslines. Let me show you what I mean.

It's tempting to go with the big sounds first. But, in order to lay a nice foundation, first, let's pull a few things back, in preparation, so that we can really hear what's taking place. Otherwise, we'll just start off making a wall of mud! To keep things clean, we'll go ahead and pull back all the way on the Feedback knob... 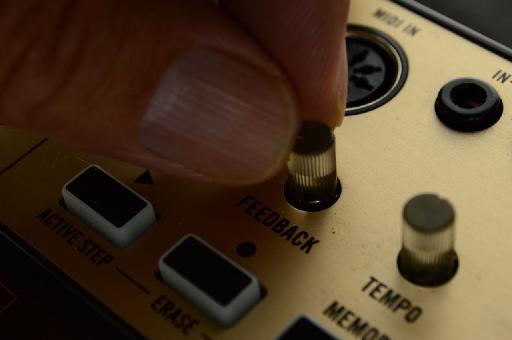 Now, we'll put Keys in Unison mode, and pull the Detune knob all the way down. Granted, this is sort of the point of Unison mode, to have a little bit of Detune going, to keep things sounding thick. But, don't worry, we'll be adding it back in, soon. 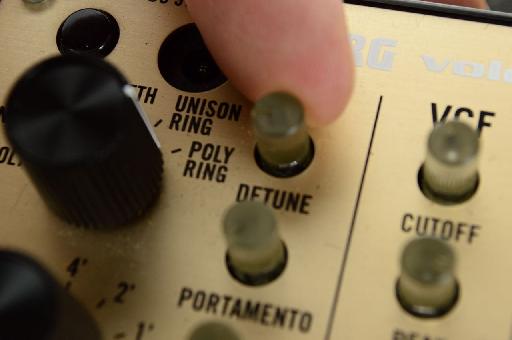 Finally, I'll modify the EG section so that only the Decay is up, around 75%. This will give us a nice, plucky synth sound that we can use as a nice, beginning bass pluck. 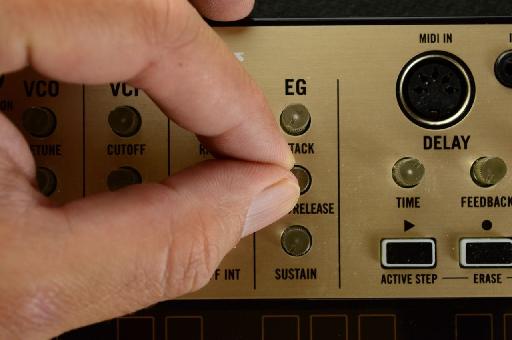 Alright, we're almost ready to lay that nasty arp line. But, before we start, let's go ahead and clear the pattern that currently exists, if one exists. To clear, I'll hold down the FUNC button, and press the Clear ALL, step button, at the lower right of the Volca. 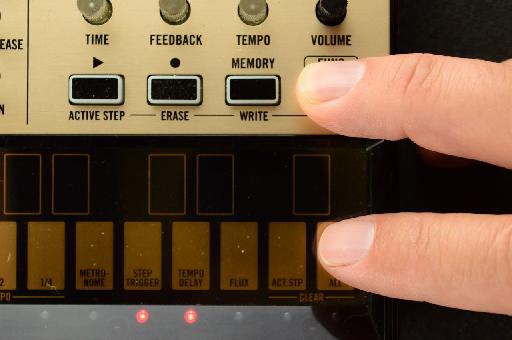 Alright, now nothing is stopping us! I'll hold down the Record button, and press the Play button. Now, I've got the familiar strobing light, moving across the bottom. If it's moving incredibly fast, I'll usually go ahead and lower the tempo. By working in a lower tempo, it's easier for me to program a really sick pattern, with notes being arranged, exactly the way I hear them in my head. And, don't think I can play things through, perfect, the first time. I usually do my best, and if I miss a note, I'll just play it, the next time the light strobes back around. 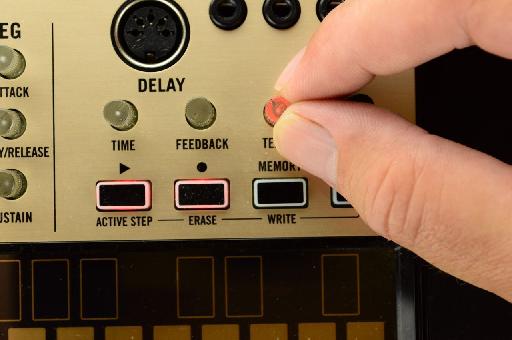 Here's where I begin using my favorite trick...

I'll start tapping in a rhythm on one of the gold step buttons. In this case, I'll use the key of A. While I'm tapping in a rhythm, I'll start moving the Octave knob of Volca keys up and down, by one step, sometimes two steps. This causes the A button that I'm currently pressing to Jump up, or down an octave, depending on which way I go, while I'm playing. The resulting pattern is something along these lines. 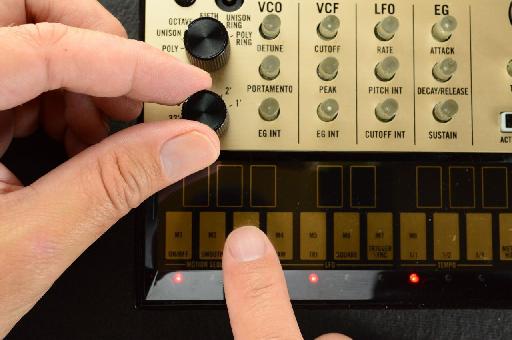 Wow, that was really easy!?

It can take a while to program something like that on a soft synth, and yet Volca Keys knocks it out, easy! And, for some, this particular trick, with the Octave knob, and the basic EG settings would be enough. But, we're not done yet! Though, if you like how this sounds, and think you might want to use it for a pattern, or pattern variation for later, go ahead and hold down the FUNC button and tap MEMORY, this will cause the lights to start blinking, and cause the step buttons M1-M8 to light up. Press the Memory button you'd like to save the pattern to.

With the basic pattern programmed, all we need to do now is sculpt the sound to give us a little bit more of that arpy, techno, trance, type of arp pluck we're used to. A great way to achieve the class Bass/Arp pluck is to, first, pull back on the Cutoff (position this knob around 9 to 8 o'clock) and raise the Peak, slightly, over in the VCF section. 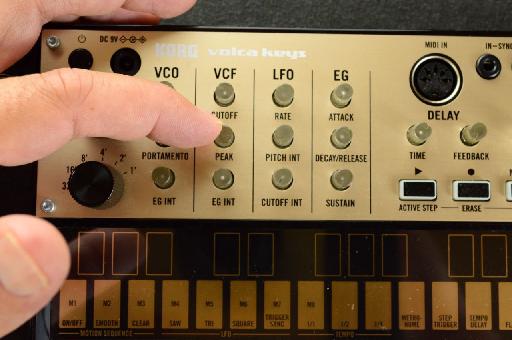 Now, with the basic filter settings, ready to go, while still in the VCF section, I'll start raising the EG INT, which introduces Envelope Gate modulation on to the the filter, causing the filter to slightly open and close, faster or slower, bigger, or wider, based on the settings of the Envelope Gate (EG), which currently only has the Decay knob, partially up. And, you'll probably notice, as you raise this knob, you're already beginning to hear that familiar, pluck. 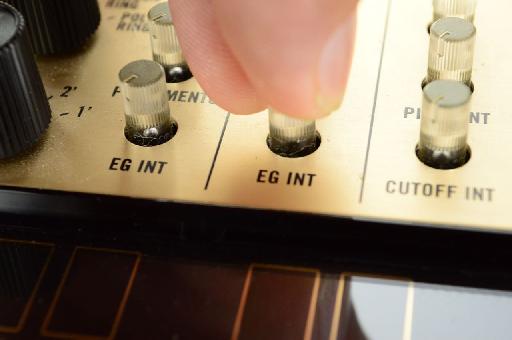 As we're getting the sound, now, let's go ahead and add the effect. Most classic arp bass lines do tend to have just a little bit of Delay. Let's go ahead and bring it back in, by slowly raising the Feedback knob until you have it echoing at a comfortable level. This will make the arp sound bigger, and more complex. 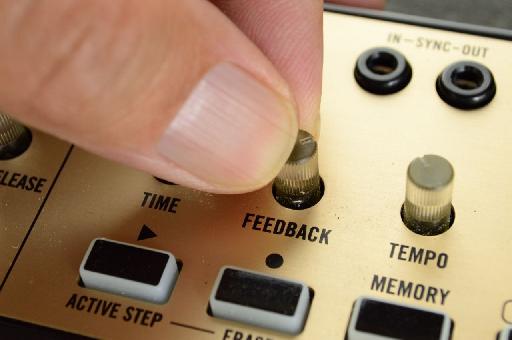 With the Delay re-introduced, it's now to start dialing in the time. This can be frustrating for some, as getting the delay to lock in with your pattern can be tricky, at first. But, with slow, and calculated movements, you can time the delay, with the basic pattern, so that it sounds like you've got extra notes, like this. 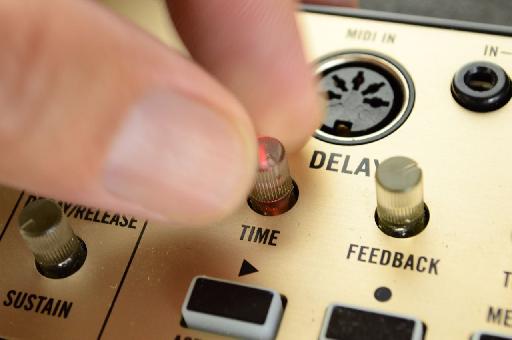 If you hold down the FUNC button, and turn the TIME knob,while in TEMPO DELAY mode, the delay will lock to the nearest quantized value, allowing you to create some cool, and precise delayed patterns.

You can also hold down the FUNC button, and choose to go in to 1/2, or 1/4 time, by pressing one of the corresponding keys, on the step buttons, at any point. This is cool for abrupt changes to the mood, the energy, and the timing of your pattern, as you're jamming through a set. 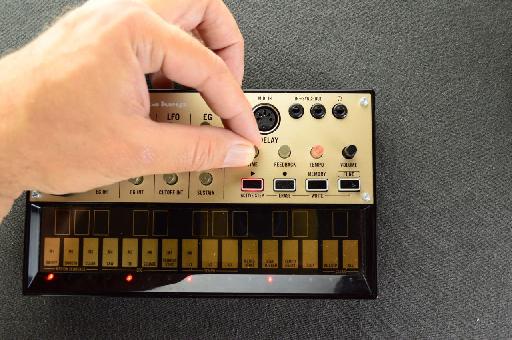 Or, just kill the delay, and keep it clean!

Whichever way you decide to go, I'm sure you'll agree, with just a few taps recorded and a little jiggle of the Octave knob, Volca Keys can generate some tight, tight bass, arp and lead lines! Remember, don't forget to save your pattern. And, especially don't forget to power down your unit, when you're done... Well, unless you're running off an AC adapter! In that case, keep it on, all night!