Make Your Drum Sessions Sound Bigger Through The Magic Of Plugins

Not everyone has access to a big studio, but by choosing the right plugins you can make any drum sessions sound bigger and punchier. Read on to see and hear how it's done.

Many of us do not always have the luxury of recording drums in a spacious studio where they can open up like a fine wine. But with that in mind, there are a few simple techniques that can turn a small/medium sized room drum recording into something bigger. Let’s take a look at some ideas using a real world session.

On a recent TV cue session, drummer Ray Levier, along with myself and engineer Mike Dwyer (Shawn Mendes, The Lumineers, Bob Weir) tracked a session in Ray's personal home studio. It’s a medium/small size room with 8 foot ceilings, but it does have a cathedral peak up above 12 feet. There is some acoustic treatment, a throw carpet on the floor and some glass doors directly facing the kit. So reflection and potential slapback is a concern.

The setup was quite simple. On the kick was an AKG D112 and a Shure 57 Beta on the snare. Toms were DPA d:vote CORE 4099s and DPA 2011s on the overheads. The all important “room” mic was a Sony C-100, placed about 3 feet from the kit and about 4 feet high, facing slightly down towards the kick. Preamps were a mix of the Focusrite ISA828 and the Manley Force.

Interestingly, I initially put up my favorite Earthworks QTC 50s as overheads, something that has long been a go-to mic for me. However, with the ceiling peak being a bit bright, and the overall reflections being bright, the first test was, well, too bright. Thats because the Earthworks are omni mics, and were literally capturing too much. So we switched out to the DPA 2011 small-diaphragm condensers, and pointed them straight down a few feet above the cymbals. That worked perfectly, as it minimized the extra room sounds, which can be challenging in certain rooms.

Here’s something we did that's a little different. We had Ray play the groove, to click, without using his cymbals for crashes. The reason was, in this instance, that we wanted to add extra compression to the Sony room mic, as well as the overheads. However, when you do that and the drummer is hitting crash cymbals, the compression can get very crunchy. He still played the ride cymbal, just not the crashes, which were placed in on a second pass using just the overheads and the room. This allowed us more small room control over our sound at the mix stage.

Below is a recording of the kit with nothing on it. As mentioned above, the crashes were added on a second pass. The kit, which is a Yamaha absolute maple hybrid, sounds good to begin with, and Ray is a seasoned hitter who has great technique, making myself and Mike Dwyer's job easier.

Here is the Pro Tools layout. On this particular track, he didn't use his toms, so at the mix stage, we simply removed them. While bleed can sometimes be good, there was simply no need in this situation. 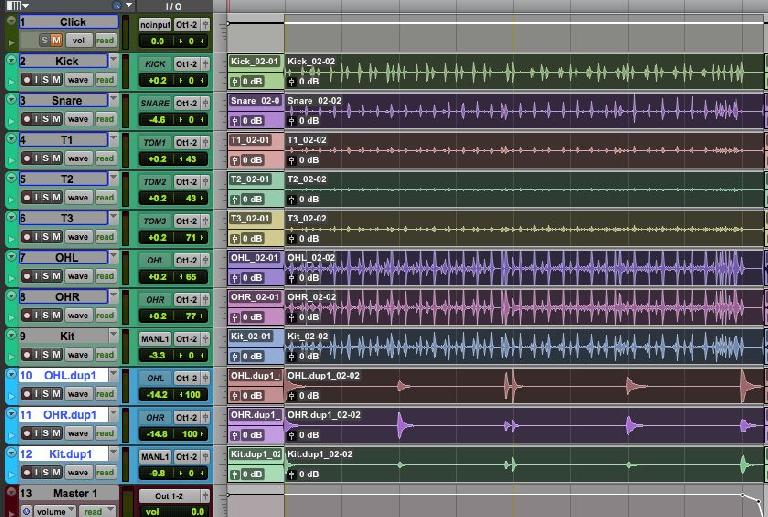 For panning, we also kept it very basic. As you can see below, overheads were left and right, the room mic was up the middle with kick and snare and the toms, since we removed them, had no bearing. The overdubbed cymbals were panned hard left and right with the room up the middle. 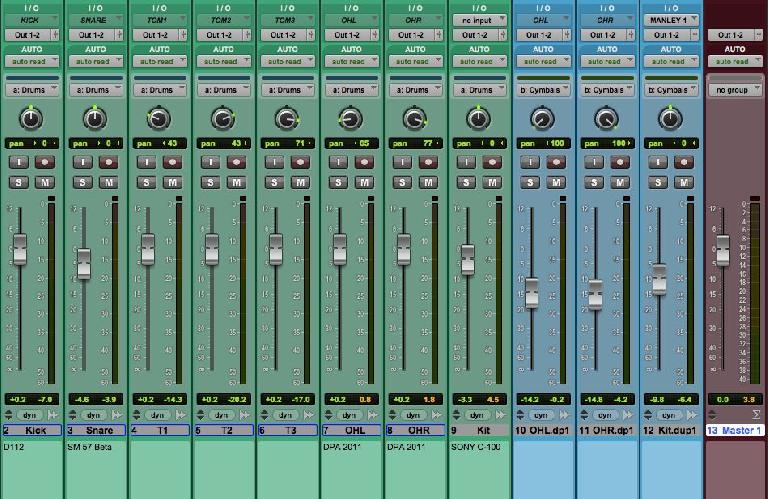 Now let's get into the beefy parts. To bring on some attitude, we put a UA 1176 Type E on the Sony C100. Cranking the Input to drive the compression harder, we had the Release almost all the way clockwise, with the Attack at 12 o'clock and the Output around 1 o’clock with a 4:1 ratio. In the EX 4 below, the compression comes in and out so you can hear the difference. The 1176 drives the whole sound harder, and brings out a lot of energy in the kick and snare. This is a great way to add depth to a small room drum recording, just by driving this type of compressor quite hard.

As for the overheads, we wanted a more neutral compression that would bring out just some of the overall stereo feel. For this, we chose the Universal Audio Summit Audio TLA-100A  . 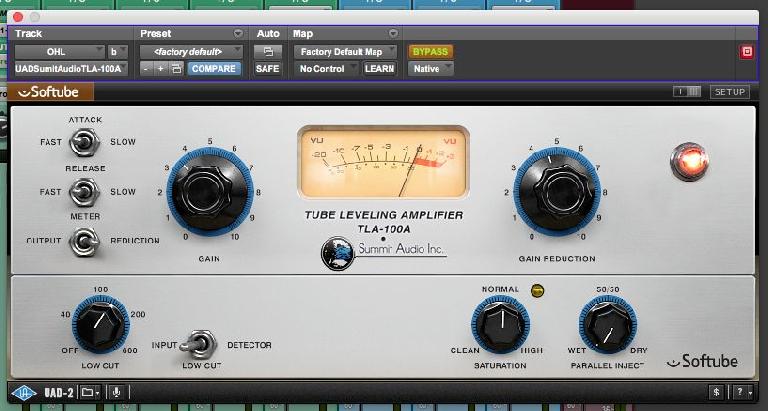 This is one of my favorites on overhead mics, because its hybrid tube/solid state design and auto level sensing brings out the overall warm feel of the drums, and adds a touch of ‘tube’ essence while keeping the sound quite natural. Also, the Input filter lets you filter out the selected low frequencies from the output signal. In this case, we pulled out some of the kick, as other mics had that handled. Setting the Gain Reduction so that the needle barely moves, the overheads stay clean and transparent. The example below shows the before and after of the overheads with the TLA-100.

For the snare, we chose to add some Empirical Labs Arousor. 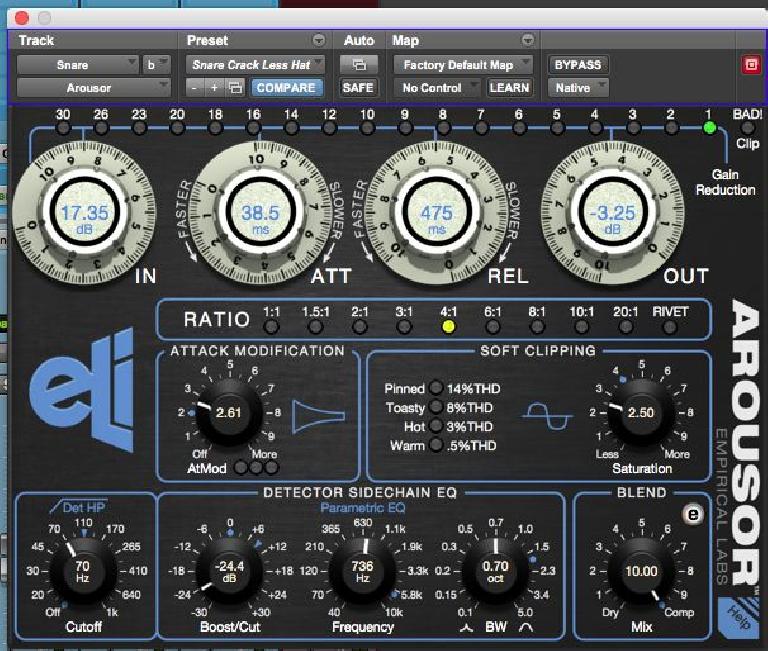 With the Attack set to 10 and the Release at around 6, by driving the In hard we get a nice whack out of the snare. Using the useful Detector sidechain EQ, the frequency just below 1 kHz is cut -24db, with a medium bandwidth. That keeps that out of the compression and lets the nasty stuff happen to mostly just the snare. EX 9 shows the before and after where the snare is driven pretty hard, but adds a nice impact to the drum.

Finally, the kick has some Waves MaxxBass on it, using one of Dave Pensado's presets to bring out the low end around 92 Hz. 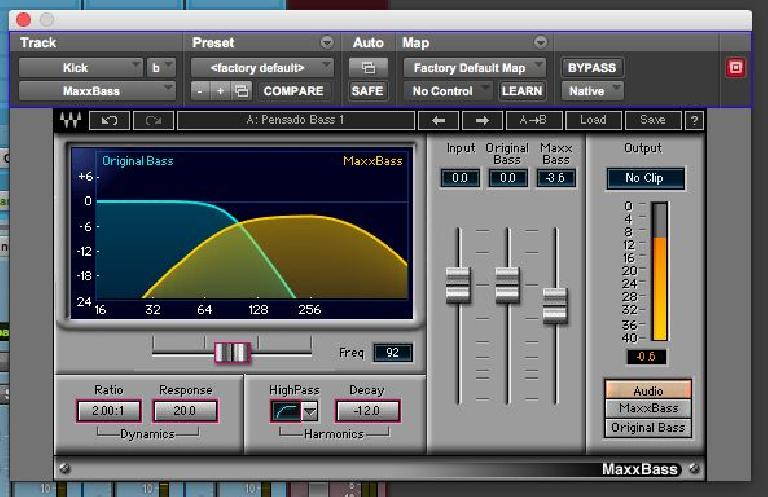 Simply put, this plugin instantly adds low end to the kick and adds the thunder down under that this entire kit needed. EX 11 includes the before and after of the plug in working that kick bottom.

Overall, what we did was take a dry kit and add some impact and energy to it through the use of compression and some low end enhancement, all without the need for any EQ or reverb. By recording the cymbal crashes separately, it let us drive that compression harder, especially on the Sony C-100 mic just outside the kit. Also, by keeping the overheards compressed just a bit, it lets the purity of the drums still shine through the impact of the aggressive snare compression. And by using just some MaxxBass on the kick, and blending it into the rest of the mics, you’ve got a big sound from a small room.

Take your recording and mixing skills to the next level with hundreds of pro audio courses in the Ask.Audio Academy: https://ask.audio/academy?nleloc=new-releases