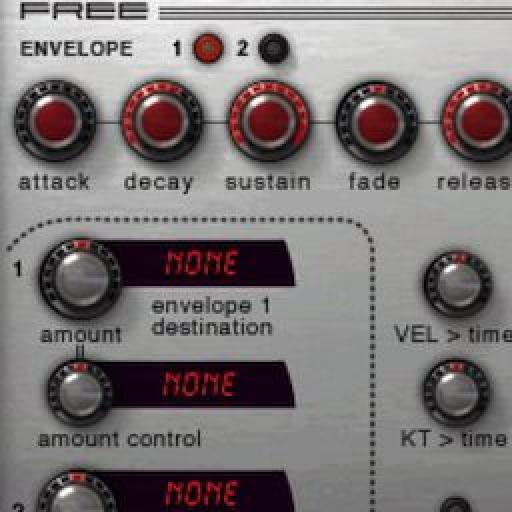 Make An Arp Patch with Predator

Language
Rob Papen's Predator is more than a synth. For some, it's on their essential studio gear list, which is no surprise as it's incredibly versatile and sounds great. G. W. tours the Arp capabilities.

There may only be one certainty in life: If Rob Papen decides to make a soft synth, it will sound good, and it will be deep. This is a trend I'm seeing over and over again in all the soft synths that have come out from the man, himself. He likes a lot of functionality in what he produces.

It's fortunate for me, because rather than focusing an entire article on a whole instrument, I can focus on just one portion of an instrument. And, if you think I'm taking the lazy way out, think again! I could write four to five page article on just the oscillators of Predator. But, that's not what I'm here for. I'd like to discuss something much more fun... The Predator Arpeggiator.

First off, the Predator arpeggiator is as fun and is possibly more programmable than most any other arpeggiator out there that I've worked with in either the hardware or software environments. Not only can you program your own melodies, rhythms and grooves within the Arpeggiator, but you can also rely on small features of polish.

But, before we get into any of this, let's just start making a basic patch, and then add arpeggiator functionality to the patch.

By default, Oscillator 1 will be playing a sine wave. To make things more audible, and 'arpish', let's switch waveform to 'Saw' to make things a little more audible. You can do this by just turning the waveform knob to the right, one click. 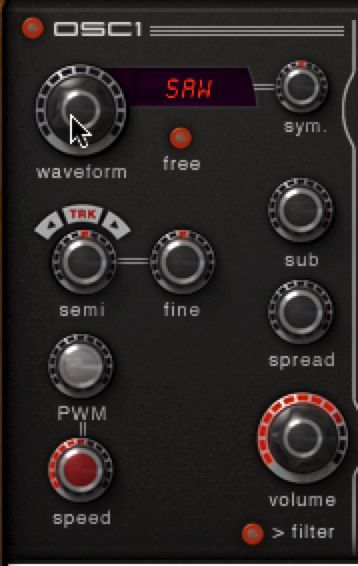 And, to give the patch a little bit of depth, let's turn the Sub knob up to -10.2 dB. Now, we've got a nice, buzzy little saw patch that is as aggressive as it is biting. 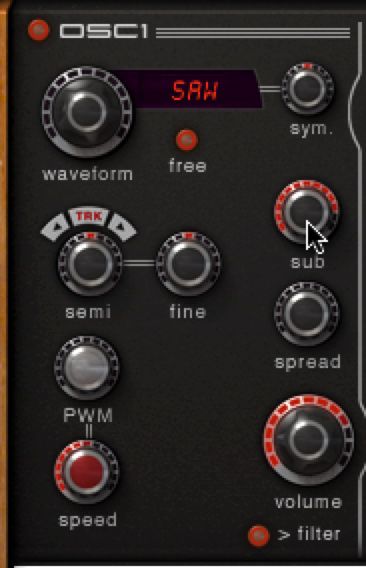 Oh, and to give the saw patch some definition for when the Arp is enabled, let's also lower the sustain down, all the way. And, pull the decay back on the Amp Envelope to 265 ms. Now, let's move on over to the fun part which is setting up the arp!

With most instruments that have an arpeggiator, it's simply a matter of pressing the “On” button, and the arp just starts working. Predator works a little bit different. In order to enable the Arpeggiator, let's switch the Play Mode to 'Arp'. 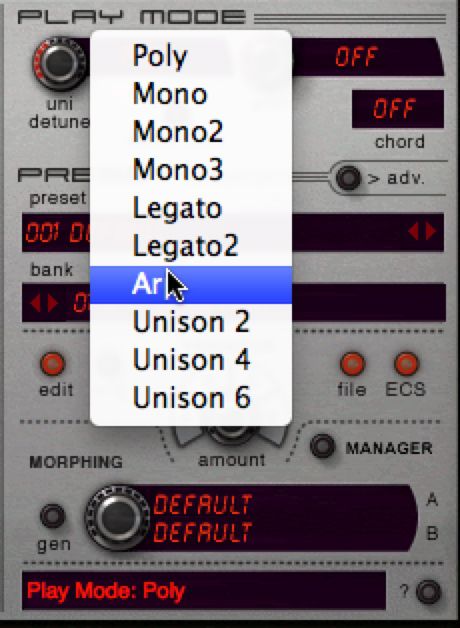 Now, when you sustain a key on your MIDI controller, you'll hear a rapid procession of 16th notes bouncing along through your speakers, headphones, or whatever you use to hear audio. Okay, so far, so good!

Let's talk a little bit about the Predators arp now, and how it works.

First off, the arp may not be visible. In order to rectify this, simply press the Arp/Mod Toggle switch to switch over from the modulation panel, to the arp panel.

Now that the arp panel is visible, let's talk about how it works. There are 16 columns, total that make up the Arp editing pane. Each column represents one note within the arpeggiated sequence. Within each column, there are specific controls that engage how the note behaves and sounds with properties like tie, slide, tune, velocity and free (function used to have the arp modulate other parameters of Predator).

I feel that it's important to note right off the bat that you do not have to have all 16 notes enabled. As a matter of fact, let's simplify the arp creation process for this particular exercise and reduce the amount of steps to 8. While it's awesome that you can have up to 16 steps, or notes in an arpeggiated sequence, often times you can create a very cool arpeggiation with 8 notes and have the arp be just as effective. Now that we have limited the number, let's add in some tuning changes to make it where the arp doesn't just play one note over and over again when a key is pressed.

I'll set up steps 3, 6 and 8 to play at one octave higher than the rest of the steps. You can, of course, change the tune so that it's not simply an octave up, but maybe one key up, or two keys up. The only thing with this is that when you play certain notes with the arp, the arp sequence itself may hit some keys that don't sound quite right within certain progressions. Programming arps that scale in octaves will always mesh with whatever melodies you throw them in. 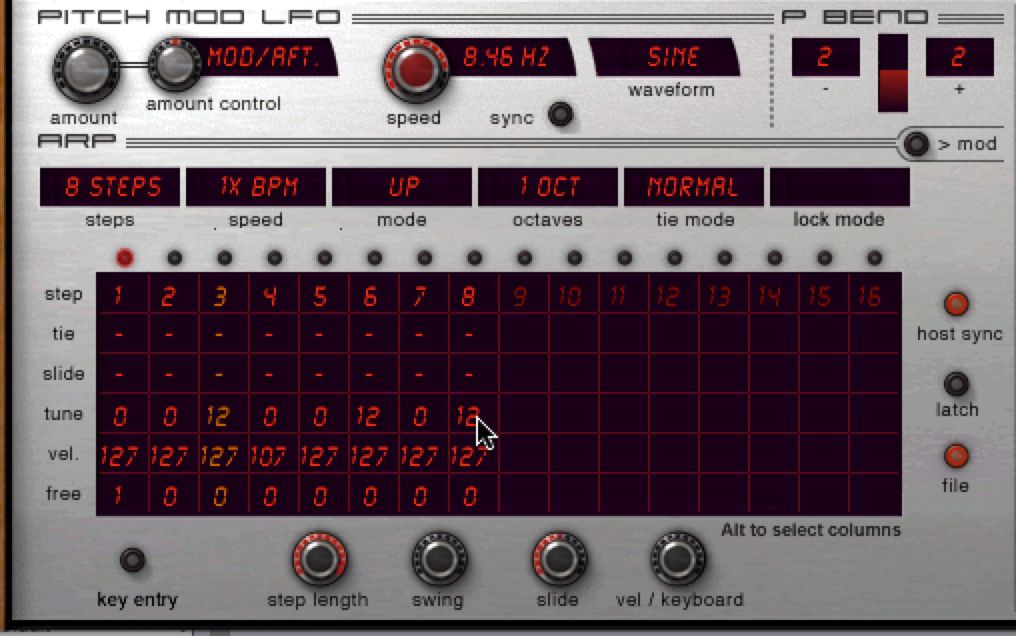 Let's hear what the patch sounds like thus far...

Now that we've got an arp rhythm that we like, let me show you a way to add to the seeming complexity of the arp, through effects. To start off, let's reduce the timing of the arp by half... 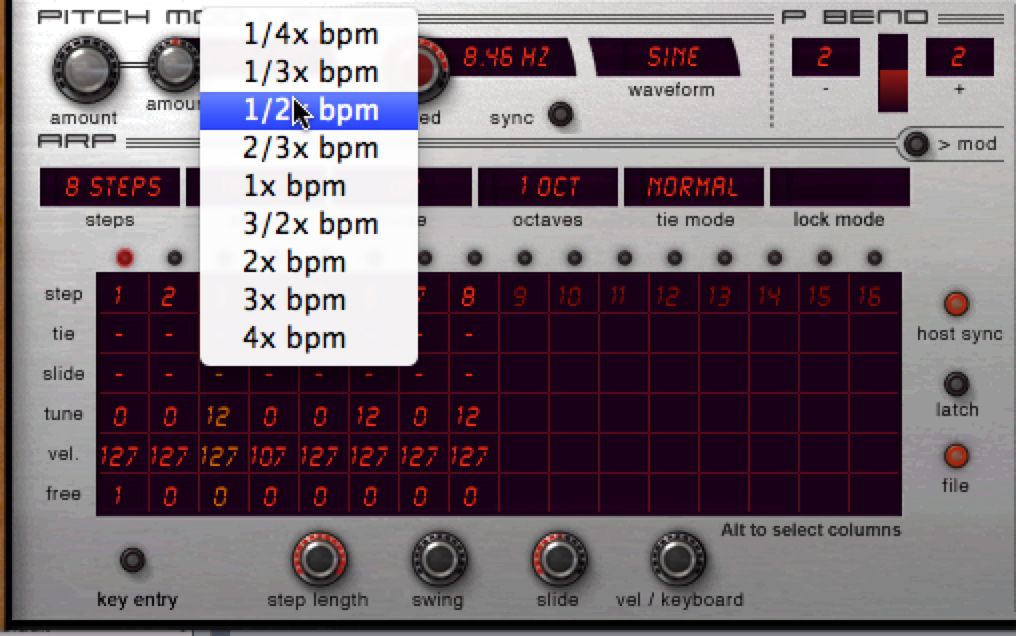 Now, you'll notice that when you play your arp, it's half the speed that it used to be. This may sound boring at the moment. But, what happens when you throw a little delay in to the mix?

On the first FX slot, I'll chose Mono Delay as the type... 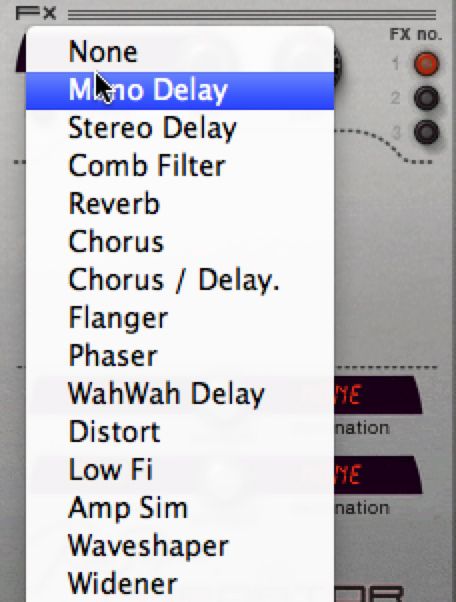 Then, I'll raise the Mix to where the dial sits at around 2 o'clock... 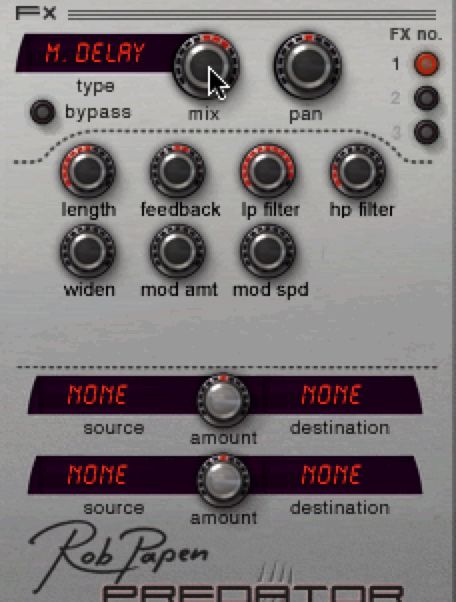 Now, if you play the arp, you'll notice that it sound like we increased the speed back to the tempo we were at before, but only because the delay is adding in a note in between each note being played by the arp. You can adjust the mix to pull back these secondary delayed notes so that they are only slight ghosts in the background. This, in turn, can cause some very cool rhythms. Now, let's take a listen to what we've created.

As you have now experienced, the arpeggiator on the Predator is as powerful as it is easy to program. Try experimenting around and see what you can come up with on your own.