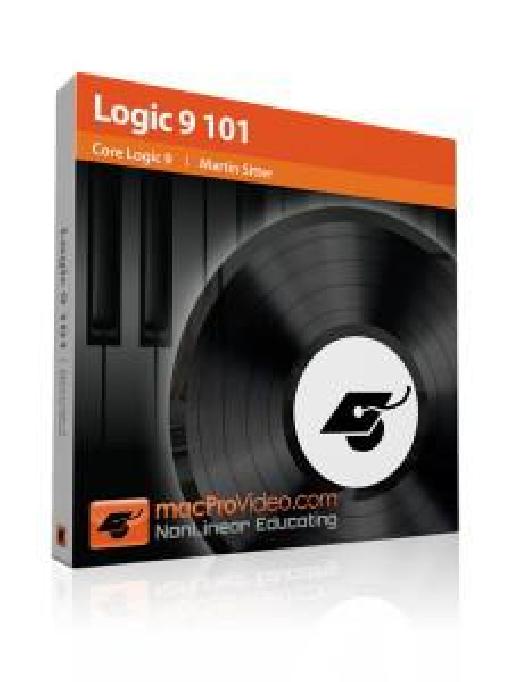 Language
Last month at the National Association of Music Merchants (NAMM) trade show several people came up to macProVideo.com's booth to ask me which Digital Audio Workstation (DAW) I think is best: Logic Pro
Last month at the National Association of Music Merchants (NAMM) trade show several people came up to macProVideo.com's booth to ask me which Digital Audio Workstation (DAW) I think is best: Logic Pro 9 or Pro Tools 8. I get asked this question a lot ... in some ways it's a tough question because at the end of the day both Logic Studio and Pro Tools do exactly the same thing ... they let you make music. And they both do it well.
While both programs, for the most part, do exactly the same thing, there are a few major differences between the two that you should understand to make an informed decision. First, Logic 9 is 64-bit optimized, which means you get blinding performance compared to the 32-Bit architecture of Pro Tools (as I write this). That means more plugins per track, and more tracks per project ... all recorded at a higher bit-depth for better sound quality. Logic Pro 9 excels here.
Additionally, Logic has a special editing area called "The Environment" that is unique in the audio world. The Environment uses object-oriented patching to connect things like arpeggiators and Chord memorizers to audio instruments and other objects in much the same way a vintage synthesizer uses patch cords to connect oscillators to filters and etc.
It's all about signal flow inside Logic Pro. While this may be a bit confusing to the neophyte, once you get used to Logic's Environment, you can produce wild and creative sounds that would be difficult to emulate in a more straight-ahead DAW like Pro Tools.
But on the flip side, Logic can't hold a candle to Pro Tools when it comes to features like video editing (and it doesn't even try). If you're workflow will entail a lot of post production in the video world, then Pro Tools is the DAW for you.
Additionally, Pro Tools still enjoys it's status as the de facto DAW in most high end production studios (though Logic Studio is making some serious inroads here). So, if you intend to work in a pro recording environment, you'll probably need to up your chops on Pro Tools in order to get those high-paying recording gigs.
It is generally accepted that Logic Studio is better for the creative side of making music, while Pro Tools is better for the tracking music (recording and editing). Before Pro Tools 8 was released, Logic certainly had better MIDI recording and editing features than Pro Tools. Combine this with the dozens of software instruments and DSP effects that ship with Logic, and you've got one of the most powerful "studio in a box" applications out there.
With the introduction of Pro Tools 8, Avid did a lot to improve the creative side of their software. The MIDI features were improved. More software instruments were introduced, and in general some attention was paid to making Pro Tools a better all-in-one music production platform. Is it at Logic's level? Well, IMHO no ... there's still a ways to go. But if you're recording your band and not working much with MIDI, you'll enjoy the more streamlined recording and editing processes native to Pro Tools.
When you are considering Logic Vs. Pro Tools, there is one final important consideration - cost.
Logic Studio runs native on any Intel Mac. You can connect any audio interface (for example, the amazing Apogee Duet or Ensemble), and you're ready to record high quality digital audio. With Pro Tools, you must buy hardware designed by Avid ... there's no support for 3rd party audio interfaces. Additionally, to get high quality sound you're going to be paying high-end prices - Pro Tools interfaces can run into the 10s of thousands of dollars.
Logic Vs. Pro Tools. What to do, what to do ... there is one final consideration you should think of when choosing the platform for you: What software do your friends use? If your friends use Logic Pro, then you should too. Ditto if they use Pro Tools. And the reason is simple: You'll be sharing song files, support issues, software plugins, and other things with these people. If you're on Logic while they are on pro Tools, sharing those files is going to be difficult. It's always best to use the software that your community uses ... and that goes for ALL software, not just Logic or Pro Tools.
Read a complete comparison between Logic 9 vs Pro Tools 9 featuring David "Logic" Earl and Keith "Pro Tools" Crusher here.

Pedro Bliss
This actually is a really good article because it's keeping things clear, and simple. That's a great concise explanation and introduction to this never ending debate, since both manufacturers are always trying to catch up on the features. Plus, I agree with you on the more creative side of logic, and that's surely why it is getting a hugely popular program in the wide electronica field.

On the personal note, I'm a logic guy but I do also have a Protools Le 8 install on my system, that I barely use. Why ? Well, I only fire it up for it's postproduction and editing features...
64 Bits is also a true game changer. Everyone should watch Steve's little video about it - available here.
And I cannot stress your last point even more ; it's an essential one that should never be forgotten.

Such an answer would have helped me two years ago, hopefuly, the price of Digidesign hardware kept me away from PT and I discovered a Logic wonderland !


Martin Sitter
Thanks for the kind words Pedro! Hope it helps ... it's a big decision choosing the correct DAW ... :)
Eric
Martin, in one of your previous blog posts you mentioned that you first started working with Cubase. What eventually led you to become a Logic guy? Also, I would love to see you do a blog post about Logic vs Cubase. Mainly because I know and associate with more producers who use Cubase as opposed to Pro-Tools. I'm a Logic guy since v7 (when you wrote the book). I agree that Logic is ideal for the "creative side of music." Cubase seems like more of a direct competitor with Logic in this regard. I'd love to hear your thoughts!

Martin Sitter
Logic Vs. Cubase ... that's a good topic too. Cubase is certainly good for the creative process. I moved to Logic mostly for the Environment at the time. I just loved the control over signal flow ...
Marcel Wittfeld
Great article! I own a professional studio and use both programs. Next time an engineers or a client asks me the "Logic or ProTools" question, all I have to do is send them a link to this article. Thanks!
Martin Sitter
Glad it helps! There's a lot to think about when choosing a DAW ... There will be some Logic, Cubase and Ableton Live comparisons coming soon too ... stay tuned!
Evan Godbold
Great article. I am interested in the Logic vs. Cubase as a DAW as well. I am the Worship Leader at a church that is looking at our current live recording situation and wondering about DAW software.

We currently use Cubase for recording our services with a Presonus Firestudio set up (w/ two digimax interfaces) for a total of 24 channels. The Presonus stuff would work in Logic as well, and I am unhappy with our recordings in Cubase.

Our engineer has been a Cubase guy, but I don't think he would mind switching if we decided to... I have been doing a lot of Logic recording with our keyboard player who is a wiz with the program, and I am much more pleased with the results. I would be interested in your thoughts, Martin. Thanks!
Martin Sitter
If you're using Macs Logic is a natural choice. The 64-bit optimization is going to really help with your recording ... especially if you're doing a full 24 channels.

Rounik will be doing a Logic Vs. Cubase comparison soon ... stay tuned!
thaso
Flip... thank God i found a topic like this.... im a Logic fan and i've used it since the beginning of time and only to day im told that your mixes sound better in pro tools than they would in Logic...

Or that was not mentioned in the topic... or was it...
Ryan
Just to add a bit of information to help anyone looking. Logic runs 64 Bit Processing while Pro Tools runs 32 Bit. This limits RAM use and Multi-Core implementation and should not be confused with bit-depth. Bit-Depth is for the most part I/O hardware dependent when comparing the Pro versions of both products. Also, it should be noted that Logic does not play nice with different bit depths, so if you plan on recording in different locations with different hardware consider that possible set-back.

It should also be noted that much of the processing in ProTools HD occurs in the external hardware while Logic relies entirely on the computer's processor.

In my opinion, ProTools seems to record a cleaner sound (although digital) while Logic is a silky smooth sound that sounds more analog although this can be a bit muddy (although I find that at least with my setup, it seemed like Logic was compressing and altering the audio to achieve this analog sound).

I agree with everyone else that Logic is geared more towards the musician (easy to make it sound decently good) while ProTools is a heavier studio production software. In reality, if you are not using ProTools HD, you will not be affected much by 32 Bit processing due to the track limits on LE and M-Audio releases. If you are looking at ProTools HD, you will be connected to the outboard DSP and I/O hardware that will do the heavy lifting processor wise.

Bottom Line: For the musician/ Prosumer: Get Logic, it is better out of the box for these levels. Also look at the other options: Cubase, Sonar, or Studio One (didn't go into these since it is off topic
For the Studio: Consider all the options - Logic, Nuendo, ProTools.
MURIITEPT
Very Interesting!
Thank You!
Tom
Hi,

Working with my latest mac pro + Logic pro 9 and VE-pro I notice that the multicore behavior is not right. It shows only the latest core being used and the rest pf the cores not used at all. there are some flaws in Logics audio engine, most notably being:

Combine the above, and you may end up with the scenario I describe. For whatever reason, Logic behaves better when no Aux outputs from the AU's are being used. Then it can spread the load of processing onto several cores. So that forces someone like me to use multinstruments in Logic without the auxes returns to be able to benefit from the mlticore spreed, but that´s obviously a limitation.

testing Cubase or Protools hosts I have not experienced this same behavior-
Rounik
Hi Tom,

can you detail whether you're running the latest update for VE-Pro and version of OSX and what are your Mac specs?

Thanks
Rounik
DJ D
WOW!!! This is by far the best explanation of the differences in these programs I have read to date. It really enabled me to make an educated decision! Thank you so much!
Harmonik
I vote Logic for now :) until I get certified on both then I will prolly vote Logic still :D