Language
Logic Pro's Gain plug-in is more than the one trick pony its name suggests. Jay Asher shares how useful it can be when mixing for pass inversion, balancing signals and more.

In each subsequent version of Logic Pro there are always new and exciting bells and whistles that Apple touts that has new users buzzing and in the case of plug-ins like Amp Designer, Pedalboard, and Drummer, it is quite understandable, as they are terrific sounding and very sexy. And yet, buried in the Utility plug-ins folder is a little CPU efficient gem called the Gain plug-in that solves so many mix problems as to be almost indispensible for users like me.

Now the Gain plug-in is not just a one trick pony. It does lots of useful things, like phase inversion, balancing incoming signal between the left and right channels, swaps the left and right output channels and even gives you summed mono when you need it.

But most of the time we use it to perform one very simple but helpful task, which is to either amplify or reduce the signal for level adjustments by a specific decibel amount.

In Pic 1, you see the Main window (formerly the Arrange window in earlier Logic Pro versions) of one of my Logic Pro X projects. 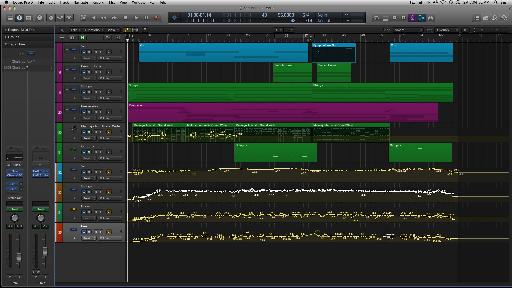 You see only ten tracks, but if you look at the numbers in the Track Headers, you can see that the first four are Folder Stacks, a great new feature in Logic Pro X, so that in reality they represent about thirty tracks. Since these are orchestral library samples I am composing with, I have performed with MIDI draw, Logic Pro's region based automation, lots and lots of CC 11 (Expression) moves to control the volume in a (I hope) musical fashion. In most of the libraries I use, Expression controls not only volume but timbre as well.

As you can also see for further sub-mixing, I have created auxes that all the voices, strings, brass and percussion are outputted to and I have used Logic Pro's track based automation to automate those auxes volume without affecting timbre. Trust me, all this automating is a lot of work!

And yet, sometimes, indeed often, with scoring to picture projects I still may not have all the levels right or I may wish to create alternate mixes depending on picture considerations, like dialogue or producer/director critiques.

In Pic 2, notice that I have instantiated a Gain plug-in on each of my auxes for sub-mixes and adjusted them.

This gives me the ability to quickly add or reduce the signal coming out of each oft these for mixing and I can even automate them without disrupting all the hard work I have done with my region and track-based automation previously. This is incredibly helpful. I know composers who have a Gain plug-in on every single channel strip in their template. While there is little to no consequence to doing so, for me that is overkill but the ability to have them inserted on my sub-mix auxes is one of the great features of Logic Pro.

The Gain plug-in is truly one of Logic Pro's unsung heroes!

I actually use it slightly differently. If I've understood correctly, you automate your main mixer fader, and then make overall level changes using the Gain plugin?

I do the reverse - whenever I do volume automation I do it to the Gain plugin fader, which leaves the fader in the mixer free to use as it was intended - for mixing!

Because how many times has every logic user made a level adjustment on the fly, and it pops back when you hit play because you forgot you'd automated it. So annoying.