Logic Pro X: Which Delay Plug-In To Reach for & Why

Language
Too much choice can be a bad thing... or can it? Joe Albano walks us through Logic Pro X's delay plug-ins and demonstrates which are best suited for different effects.

Logic Pro X includes no fewer than 5 delay plug-ins under the Delay header in the plug-in menu, and that's not including the additional half-dozen or so dedicated to modulation-based delay effects (like chorus and flanging), which are grouped together separately under the Modulation category. Though they may be (for the most part) plain to look at, the 5 basic Delay plug-ins range in function from simple utility to kitchen-sink-and-beyond. But how do you know which will be the best choice for the various delay-based processing tasks you may find yourself doing? Well, here's a quick guide to those 5 delays and their intended applications..

A Handful of Delays

Logic's 5 dedicated Delay plug-ins (more or less in order of complexity) are: 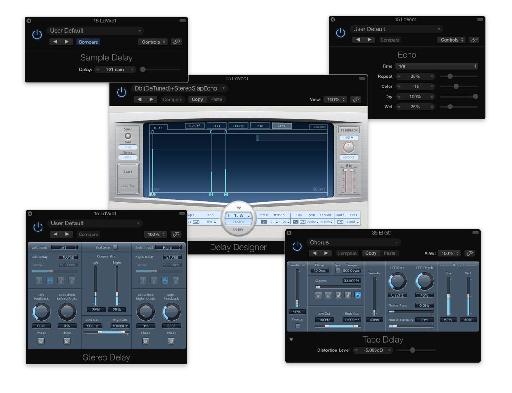 They all come in both mono and stereo versions, and Sample Delay, Stereo Delay, and Delay Designer also include a mono-in/stereo-out option as well.

Sample Delay is the most basic of the lot. It's a utility plug, which only does one thing'"delays the main signal in sample increments. There's no mixing of original and delayed signals'"this plug-in is not intended as an effect. The idea is to be able to correct for problematic inter-channel delays or mic placements in multi-miking situations, like drum kits or live ensembles in close quarters, where leakage from a nearby mic might cause undesirable comb-filtering (a potentially thin, nasal tone) when that mic is combined with the primary mic for a particular instrument. Delaying one signal by a few milliseconds shouldn't affect the perception of musical timing, but can affect'"and potentially address'"any unpleasant effects.

The Echo plug-in is a quick, simple way to get a classic slap echo effect that's in time with the musical track. That's its only effect, really'"you can set the delay time in musical increments, from half-notes to 16th-notes (including Triplet values). Simple adjustments include feedback, for Repeating echoes, a Color control, which seems to be either a Lowpass Filter (negative values) or Highpass Filter (positive values), to color the tone of the effect, and level controls for the direct and delayed signals. And that's it'"no fuss, no muss. 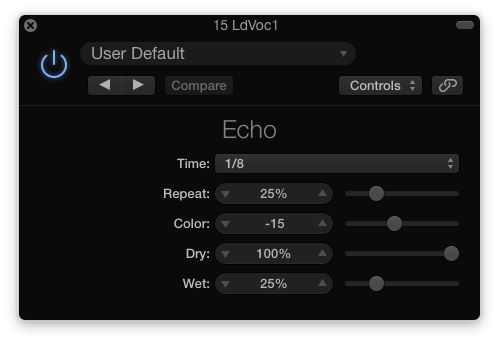 Stereo Delay is Logic's bread & butter delay. It's got two separate delay lines, or Taps, with independent controls for tweaking Left delay and Right delay parameters. Delay times can either be sync'd to Tempo in musical increments or set in (10) millisecond increments, and there are lowpass and highpass filters which can be applied to the stereo delay output. You've got separate Left & Right Feedback controls, and you can crossfeed the Left & Right repeats as well. This plug-in is good for many traditional stereo delay tasks, from basic stereo Doubling to slap echo to repeating (hard) echo effects. 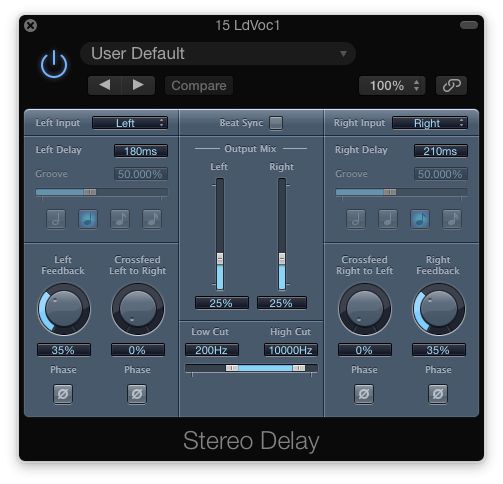 Tape Delay is another general purpose delay plug-in, but with a specific twist'"it's designed to simulate the particular sound of delay effects you'd get from an analog tape-based device. Analog tape delay setups have provided many classic delay effects, from the distinctive Abbey Road ADT, to the warm echoes from classic tape loop devices from Roland and others. Tape Delay comes as mono or stereo, but with only a single set of controls for both channels in the stereo version. 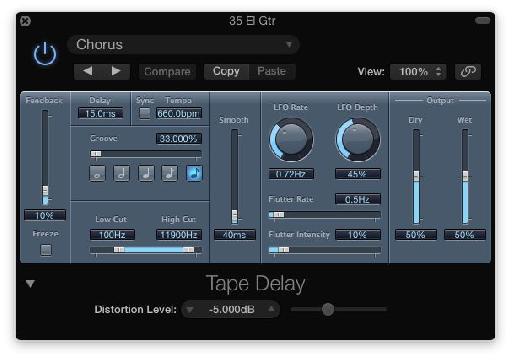 Besides the usual delay time, sync, and feedback settings, there are a number of controls for simulating the unique character of tape-based delays. Low and High Cut filters narrow the bandwidth, as would have been the case with most tape-based effects, and there are several Modulation controls. LFO Rate & Depth control periodic modulation, for subtle chorusing, and Flutter Rate & Intensity emulate the speed irregularities common to mechanical tape devices'"a key ingredient in the famous Abbey Road ADT effect. There's also a distortion control, which can adjust the amount of simulated tape saturation. Together, the filtering, modulation, and saturation can impart a subtly richer, warmer character to ADT or echo, and also allow for modulation-based effects like Chorusing, making Tape Delay the one to use when the classic character of a vintage effect is desired.

Delay Designer is the most recent addition to Logic's delay effects'"it incorporates many of the features of the other delays, but goes much further. While the rest of the delays have either single tap (with feedback) or dual-tap (Stereo) delay lines, Delay Designer is a multi-tap delay. The user can set as many individual delays as desired, and have full individual control over all parameters for each tap. These per-Tap settings include delay time (sync'd or free), level, & pan, along with HP/LP Filters, Pitch-Shifting (semitones & cents), and Feedback. 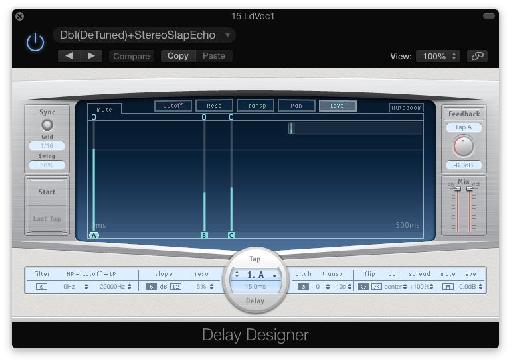 Being able to sculpt each delay Tap allows for virtually any delay effect you can think of, from ADT (with multiple taps & detuning, for thickening & spread), to rhythmic echoes sync'd to the beat, to elaborate custom-made rhythmic patterns (a very simple one is illustrated in Audio Example 3). You can even combine various effects'"Audio Example 4 is a user preset with a slightly detuned ADT combined with a warm (lightly filtered) stereo slap echo. While the other plug-ins may be more efficient for setting up a simple delay, when you need to design a more complex effect, Delay Designer is clearly the weapon of choice.

Tools of the Trade

So those are Logic's Delay plug-ins. This was just a very brief overview, and, as I pointed out earlier, I didn't even look at the delay-based plugs found under the Modulation umbrella, which include dedicated Flanger, Chorus, and Ensemble effects, among others. But even with just these 5, you've got the bases pretty well covered'"Echo is great for quick musically-timed echoes, Stereo Delay provides solid ADT and echo, as does Tape Delay, which can also dial up some nice, warm modulation-based delay effects, all with a distinctive analog character. And Delay Designer is there for inveterate tweakers who want their delays to add something more than just simple, classic effects. The plain-jane appearance of these delays (except, of course, Delay Designer) may not be as inspiring as the slick graphics and photorealistic front panels of many 3rd-party plug-ins, but a little time spent getting to know them will reveal a lot of capability lurking there behind those innocuous blue panels, if you give them the chance.