Logic Pro X: What's Up With Articulation IDs And Drummer?

Language
One of the less well documented features in Logic Pro X's Drummer is Articulation ID. In this tutorial-article, Toby Pitman explores it in depth, looking at its benefits and ways it can be improved.

So one of the new features in Logic Pro X is the Articulation ID. This is mainly used as a new 'Group' switching system in the EXS24. Basically each MIDI note can have a unique ID that can trigger a group of samples (say a different playing articulation) from within one master patch. This is already in effect in some of the new Orchestral patches and looks like a very promising feature.

It also (as I've come to learn) features quite prominently in the new Drummer functionality. Now where the Articulation ID succeeds in the EXS24, it causes some real confusion when it comes to using MIDI generated by Drummer! Let me explain.

So we all know that you can copy a Drummer part to a new Instrument track and trigger say a kit like Superior Drummer from the Drummer performance. You do this by Option-dragging the part to the new track. It works quite well!

In fact if you Shift-Option-drag, it creates an alias part that updates in real time as you make changes to the Drummer part without having to recopy which is even cooler.

Anyway, so here's the MIDI that is generated by copying the Drummer part.

Here's how it sounds played by SD2. While you're listening, look at the MIDI and see if you notice anything odd.

Did you get it? If you didn't here's what's wrong.

The groove playing is a predominantly Closed Hat pattern. When I looked at the MIDI I wondered why the Closed Hat was being triggered off A#1 which in GM MIDI drum world is the key for an Open Hat. Very strange!

In fact when I checked the mapping in SD2, I found that clicking a note in the MIDI region on A#1 was actually triggering F#1 in Superior. 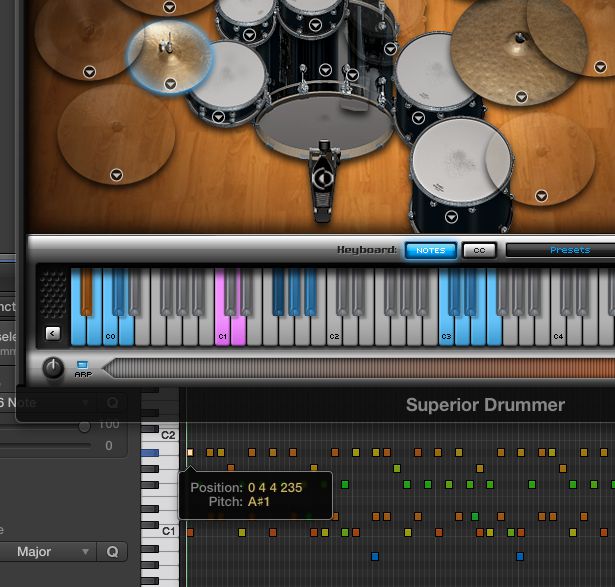 Double checking I hooked up a Monitor to the SD2 track in the Environment and sure enough the note on A#1 was definitely coming out as F#1. Why was this happening? 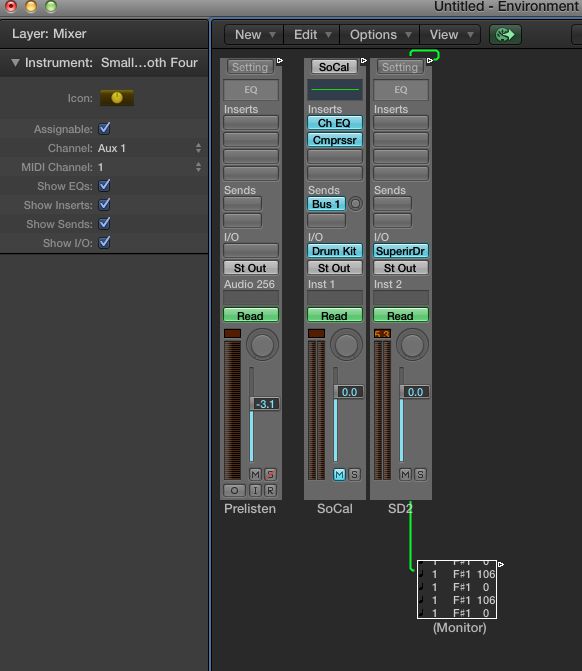 So after a quick Google search, I found the cause! Articulation IDs! Now this is not very apparent on the surface to say the least! You'll find these IDs hidden in the Event List under View > Articulation ID.

You'll now see a new column appear with the IDs. 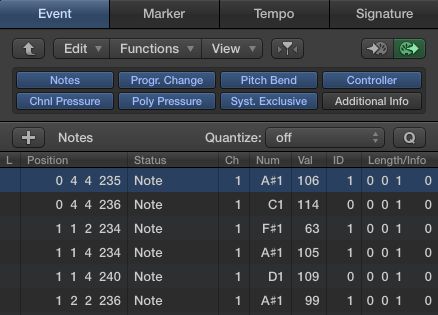 It seems that Drummer is using these IDs to do some behind-the-scenes functionality when it comes to Hi-Hats. It's quite complicated... too complicated even! It depends on a number of factors as to how it behaves, like what MIDI mode the DKD (Drum Kit Designer) is in and even what track (non DKD) the MIDI is played from. Here's how it works.

Note: This ID functionality is only built into MIDI Regions that derive from a Drummer part or are created on a DKD track!!

When you create a MIDI part from Drummer part onto a non DKD, track IDs function as follows:-

As you'll come to see, this has some flaws when it comes to accurately mapping MIDI to Superior Drummer and other software kits.

No Transposition. No access to opening stages via keyboard or Mod Wheel on DKD track! Only with IDs!

No Transposition. Access to opening stages via Mod Wheel. Foot Closed now on A0.

So as you can see this is all a bit complicated. The problem here for me with all this is that the MIDI that is generated from a Drummer region that incorporates Articulation IDs makes absolutely no sense at all! Why not just output a MIDI file that is readable and functions according to the GM mapping standard!

This is what I would expect to see this groove look like in the Piano Roll.

This took several minutes of nulling IDs and moving notes. Luckily you can select events by ID which makes it quicker. Incidentally, the resulting MIDI performance is EXACTLY the same but now it visually makes sense and is easily transferable to any drum software you like! Acoustic or electronic.

Also software like SD2 and NI Drummer series also map graduated opening of Hats over key spans so this is a right dog to map and sort out!

Just out of interest, I tried exporting a MIDI region with IDs. This actually strips all the IDs and you're left with a MIDI file that makes no sense! :)

Why not give people an option to render the ID behavior into sensible MIDI. Remap all the transposing and such. Better yet if you have a Closed Hat, why not just put it on F#1 instead of an A#1 with a custom ID!

Now I know that this is all new and is still in development so I hope we see this option implemented soon. Funnily I spoke to another couple of Logic X users who ran into this exact problem when trying to map Drummer parts to other kits. Most were so enraged that they ended giving up on it. After all, it's not very well documented.

I think Articulation IDs have a lot of potential especially if Apple manages to include a way to script ID behavior! That would be very interesting.

Dave DeLizza
I was trying to figure out why the SSD Platinum kits (which have their own strange mapping which i rectified) were missing notes and why there were notes below the kick drum that didn't really seem to be doing anything.

Really silly, I'm sure it's their way of future proofing or something, but it's a real hassle. Thanks Toby.

Colin
Very interesting - thanks.
Toby, hopefully you've sent feedback to Apple about this...
John Davis
This article was written in 2014. It is currently 2018. Has this issue been resolved or is there a work around?
Thanks