Language
Most of us don't have a pro drummer inside our studios waiting to help us out... enter Logic Pro X's new artificial intelligence drummer. It follows the groove of your song, and actually sounds great!

When I first sat down with Logic Pro X, I was introduced to this guy Kyle:

When Kyle and I first met I was skeptical. Who the heck is this guy? He thinks he can lay down a pattern that's better than something I can lay down? I'm a pretty darn good finger drummer and programmer, so this guy had his work cut out for him.

I had a song in front of me with a fairly simple arrangement. Kyle took one look at it, and shrugged. Not in a cocky way... in that really annoying, self-confident, experienced, and enthusiastic way that ate at my skepticism. He wrote out a part in less than a second that he felt was appropriate.

The song started, and Kyle was in the intro. Toms thudding away, little details and fills here and there. Then the verse came along, and he transitioned to hi-hat and built off of his previous groove. The snare was placed just right. The kick had a wee bit of play. This guy made my finger drumming seem childish. This guy was a drummer. This faceless bro. This machine.

I have grown to love Kyle and his good drummer friends. I can't believe I'm admitting this... but I used them on a track I'm working on. I showed them a groove I had for the song, and they matched it. I asked for a different kit, and they didn't complain. Drummer kinda blew my mind. My drum parts started sounding like a guy smacking calfskin with a stick again instead of my programmed meticulousness.

I guess this is a confession. I really love Kyle. I mean, he and all of his drummer buddies. I feel guilty about it, but wow. It's so much fun to play with these guys. They are tight, and I can feel the ghost in the machine. Apple definitely took their time on this feature, and I know my professional drummer friends are gonna laugh at me like I just started dating a toaster.

Here's something kind of amazing. Try this yourself. Doesn't take much time at all. 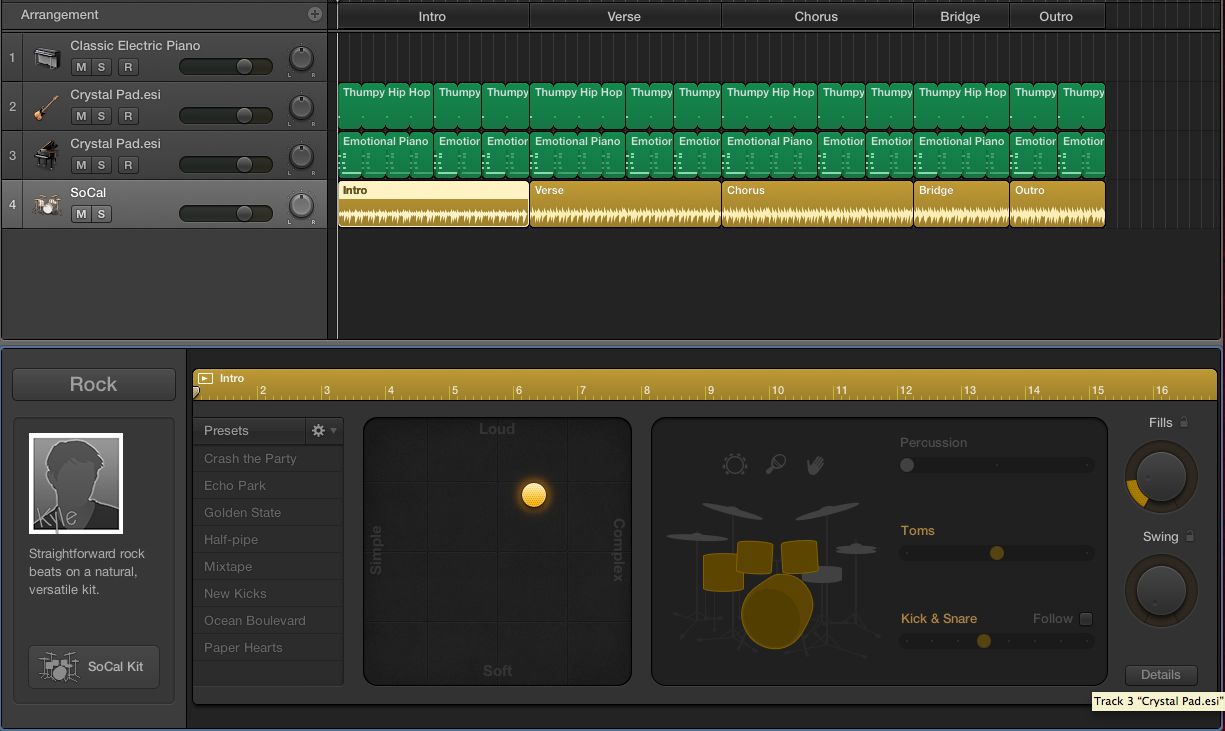 ...Kyle pops up and makes an arrangement for us.

Here's the creepy thing: Kyle, and all of his drummer friends are actually aware of your arrangement. They are going to try and fit into your song seamlessly and be sensitive about dynamics and such, while at the same time bringing their experience to the plate.

I know. It sounds really creepy at first, but after you play with it, it's totally awesome and a lot of fun. It's not replacing my drummer friends any time soon, but I've never had so much fun jamming with a disembodied drummer.

This is just my own personal take on drummer. I am totally impressed, and drummer listens. Kyle? He and all of his friends will take direction well. They can practically be conducted with the x/y pad. If you create a new drummer region, they create a brand new part. It's hard to find two that are exactly alike.

It's creepy. I know.

But play with it. It's reeeeeeally fun.