Logic's bundled reverb processors are among the best in the business. But which one should you choose? Joe Albano shares his thoughts...

The two main types of digital reverb are Algorithmic reverb and Convolution reverb. Logic comes with a generous collection of reverb plug-ins, employing both designs—the flagship plug-ins are Space Designer, representing the convolution side, and the (relatively) new ChromaVerb, an algorithmic reverb. How do they stack up? Let’s take a brief look. 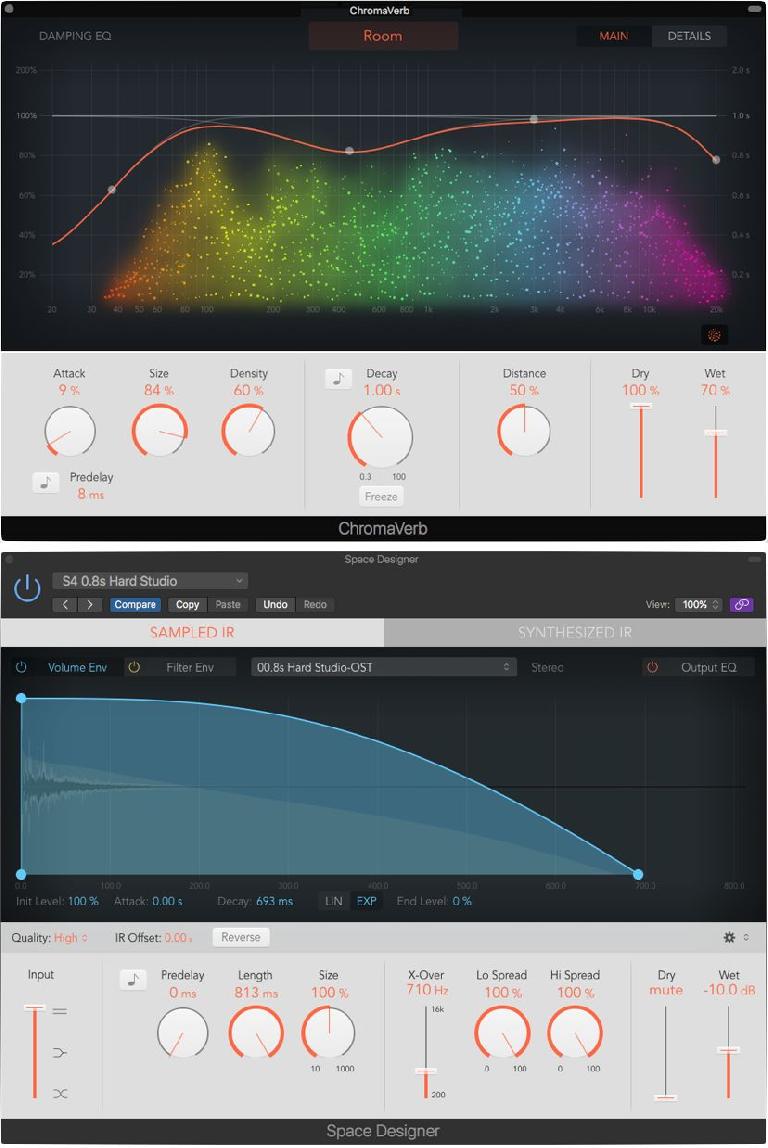 For reverb lovers who may not be fully versed in the underlying technology, algorithmic and convolution reverbs take very different approaches to the creation of artificial reverb. In a physical space a reverberant sound field consists of three main components: there’s an initial delay—the first reflection—followed by a pattern of delays called Early Reflections. The particular pattern of the Early Reflections determines the overall character of the reverb; further reflections build up into a dense field of later reverberation that eventually dies away. Technically this last bunch of reflections is the reverberation, but it’s common to refer to the entire build up and tail-off as reverb. 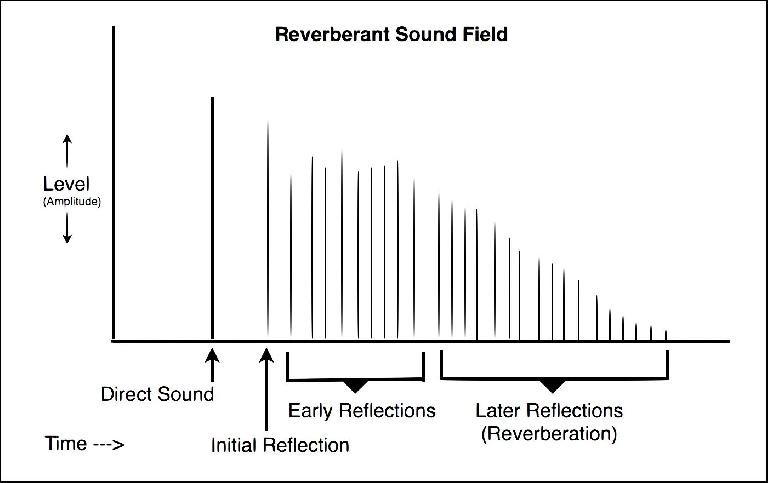 Algorithmic reverbs create a reverberant sound field from scratch, by building up many digital delays into patterns characteristic of different types of natural reverberation. They’re fairly CPU-intensive, but today’s computers can handle the requirements easily, allowing for multiple reverbs to be used on different instruments and voices in a mix. Since the reverb is built up from scratch, the user can usually exert comprehensive control over the various components of the reverb, from the delay time of the initial reflection, to the pattern and density of the Early Reflections, to the decay time—the Reverb Time, aka RT60—of the later reflections.

Filters are typically employed to further shape the tonal character of the reverb, and all these adjustable parameters can be saved into various presets, which can either emulate the sound of real rooms and halls and mimic the unique quality of older mechanical reverb devices like plates and springs, or be tweaked for less-natural special effects like reverb pads and swirling soundscapes.

Convolution reverbs, on the other hand, use samples—recordings—of the response of real rooms and spaces as the basis for their reverb sounds. A full-range impulse (or a swept tone) is played into a real space, and mics pick up the room’s response—the character of the ambience/reverberation in that room. This recording is called an Impulse Response, or IR, and it’s the source of the reverb for a particular reverb preset. 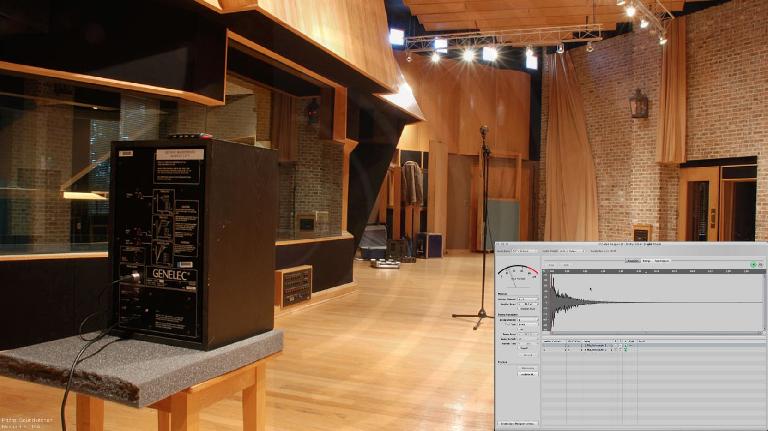 Just as with instrument samplers, the reverb sample is loaded into RAM, and when signal is sent through the reverb individual digital samples of the audio are multiplied sample-by-sample with the individual samples in the IR—a process called Convolution. This has the effect of making the audio sound like it’s in the original space. Convolution reverbs provide highly realistic spaces, but since many of the aspects of the sound of a particular space are fixed in the IR recording, there’s typically less user control over the particulars—the key is to have a large library of IRs available, though some convolution reverbs do offer a useful degree of tweakability nonetheless.

Both algorithmic and convolution reverbs are capable of providing rich reverb sounds, so let’s take a look at Logic’s top-of-the-line offerings for each type, staring with the algorithmic ChromaVerb.

As Logic’s flagship algorithmic reverb, ChromaVerb provides a comprehensive set of controls, as well as a good collection of presets that emulate both natural spaces and offer more creative reverb effects. In an algorithmic reverb, the specific timing and pattern of all the various reflections that build up into the reverberant sound field is controlled by a mathematical formula—an algorithm—which determines the particular character of the reverb in a preset that’s based on that algorithm.

This is usually the one aspect of an algorithmic reverb that’s set under the hood and not under the control of the user, even though the user can adjust the details, as described above. ChromaVerb provides over a dozen algorithms to choose as starting points in crafting a reverb preset—they range from natural rooms, chambers, halls, and theaters, to more effect-oriented algorithms with names like Strange, Airy and Bloomy. 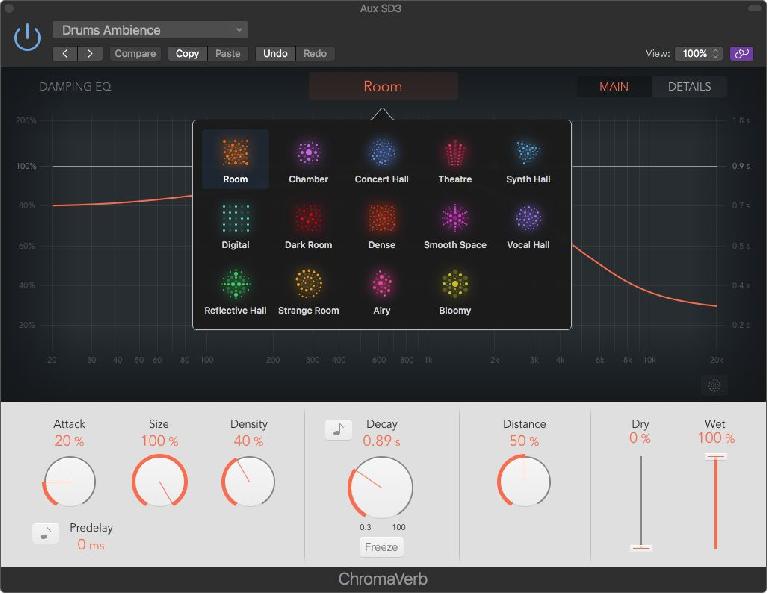 The algorithms that emulate natural spaces feature Early Reflection patterns and decays typical of real spaces, and range from short 'verbs that consist mainly of ambience—primarily early reflections with little or no later reverb tail—to long, lush halls, including some reminiscent of the classic warm digital reverbs of yesteryear, like the high-end Lexicon units that ruled the roost in the 80s and 90s. The more effect-oriented algorithms may feature fewer natural reflection patterns and buildups but a offer rich sense of space and depth.

For the intrepid tweaker, ChromaVerb is like Christmas come early. Once a particular algorithm is chosen, on the main page there are the usual algorithmic reverb controls for room size and decay, as well as knobs to set reverb attack and density, and apparent distance. On the second Details page there are more interesting options. 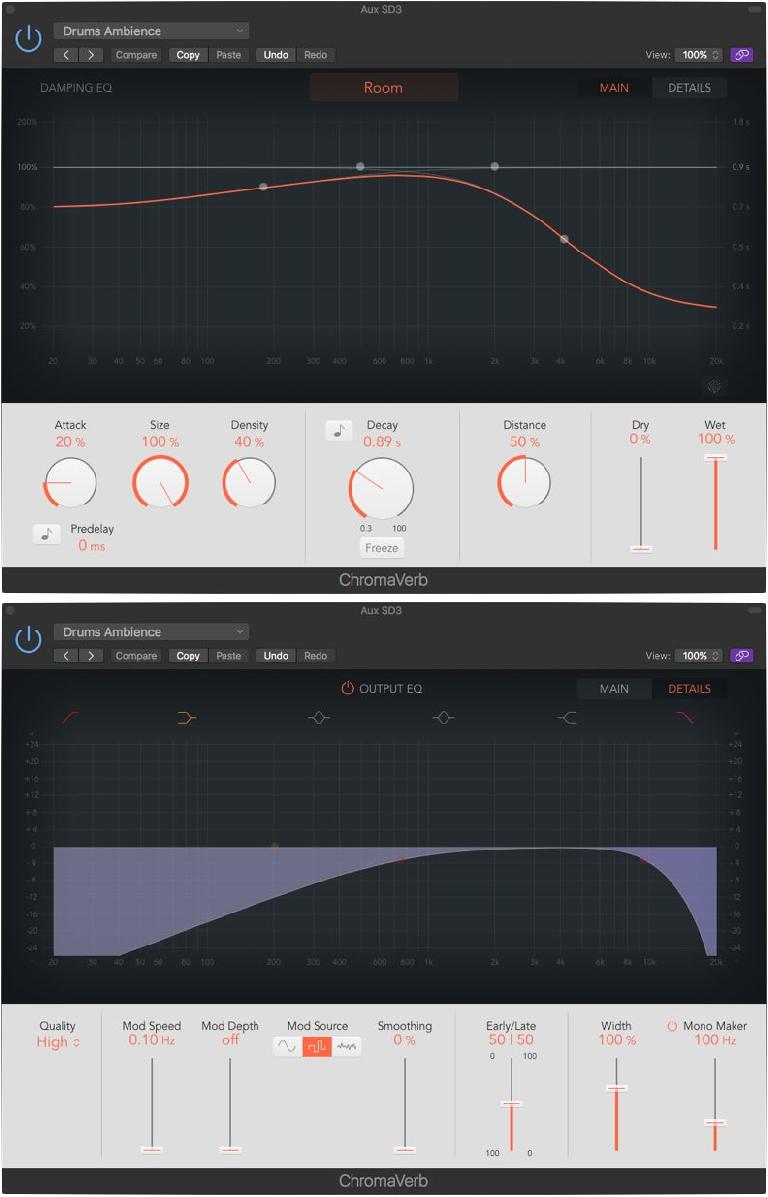 You can set the level balance between the early reflections and later reverb tail, and adjust the width of the space. There’s also an option to add modulation to the reverberation. Some of the classic algorithmic digital reverbs—notably Lexicon’s—included modulation to enhance an otherwise potentially more static reverb tail, providing extra richness and subtle motion. ChromaVerb’s mod options—which include a choice of LFO shapes—let the user dial up varying degrees of modulation, for anything from subtle to more pronounced mod effect. There’s even a couple of EQs—an overall output EQ and another EQ that affects only the reverb decay, to fine-tune the simulated damping effect (damping is the effect that absorbent surfaces have on the tone and decay of a real reverberant sound field).

A few of Chromaverb’s presets:

With its set of smooth, rich algorithms, and the comprehensive collection of user controls, ChromaVerb’s status as Logic’s premiere algorithmic reverb is well-deserved. But it’s not the only game in town.

Space Designer has been around for a long time now, but it still stands up as an excellent and capable convolution reverb, with an ever-growing library of IRs. 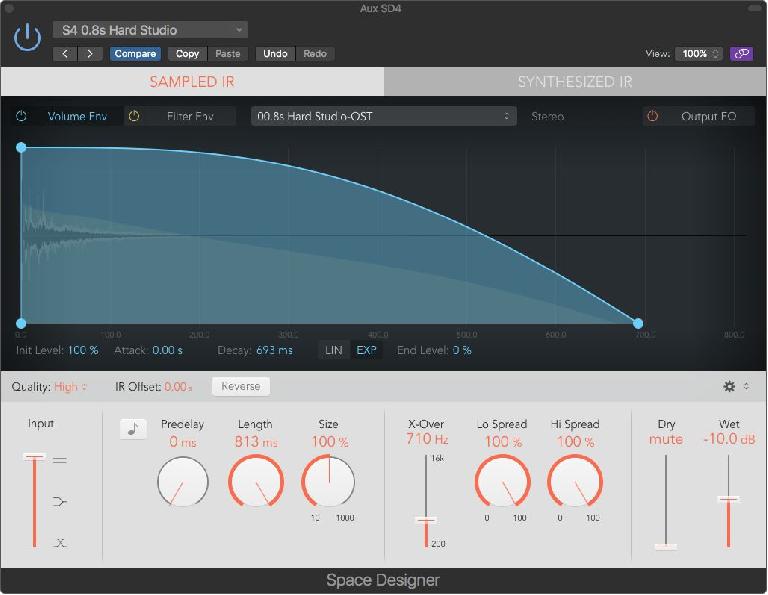 These include a wide range of natural rooms, from music spaces to spaces suitable for post-production, like tunnels, hangars, car interiors and the like. And since IRs are just regular audio files, Space Designer can also use recordings from other sources—there are plenty of third-party IRs out there, many of them available for free.

The sound quality of a convolution reverb is, of course, only as good as the IRs used, but what many people don't realize about convolution reverbs is they’re not limited to using IRs of real spaces or rooms. Any audio file can be used as an IR, and recordings of mechanical sounds or even loops can provide some wild special effects. Convolution is often used for speaker simulation in virtual amp modelers—using an IR of a speaker’s response makes the audio sound like it’s playing through that speaker, with all the rich comb-filtering effects picked up by the mic used to record the IR. Logic includes a free utility for users to record their own IRs, and this is actually quite easy to do—set up a speaker and a couple of mics in a nice-sounding room or stairwell, and in short order you’ll have a nice-sounding custom IR.

Despite the fact that many of the key aspects of a particular room’s reverb sound are fixed in the IR—early reflection pattern, maximum length, etc—some convolution reverbs still offer user adjustment of other aspects of the reverb sound—Space Designer offers a generous set of controls for fine-tuning the details of its various IRs. 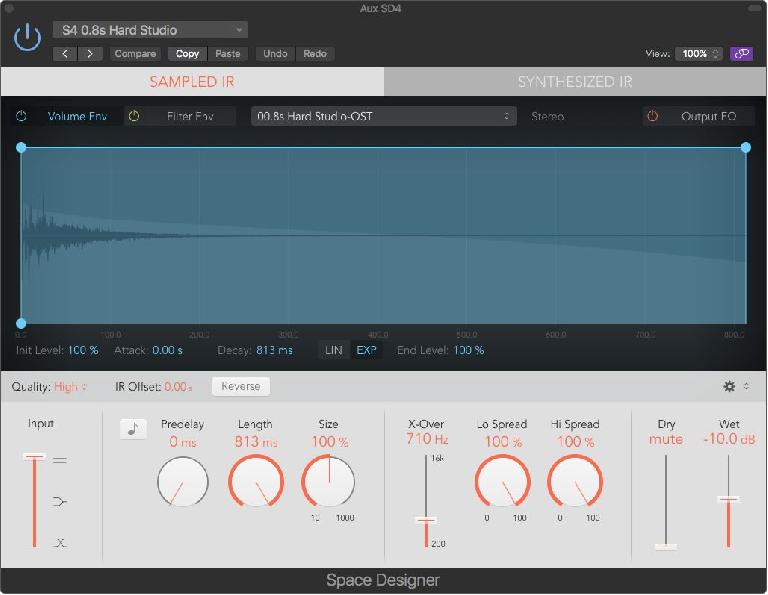 Though you can’t lengthen the Reverb Time of an IR (without lowering sound quality) you can shorten it (Length); Space Designer provides two user envelopes for volume and filter (tone/damping). This is a highly useful feature—instead of rejecting longer IRs from larger rooms when a short, tight reverb is needed, you can simply shorten those decay times, greatly expanding the available collection of IRs. Some of my favorite SD IRs are shortened versions of larger, longer rooms.

Once again, as with ChromaVerb, you can tweak Size and width (Spread), and there’s an Output EQ for final overall tonal shaping. Predelay lets you add additional delay before the initial reflection, which can both increase the apparent size of the room and get the reverb out from under the audio signal, for better clarity in a mix. On the effects side, you can play IRs in reverse, and there’s even an option to use internally-synthesized IRs in place of the usual sampled IRs—another way to get into special-effect territory.

A few of Space Designer’s IRs, including special effects:

Both Space Designer and ChromaVerb offer excellent reverb and effects, and either could serve as the main—or only—reverb for a mix. Each brings its own specific qualities and capabilities to the party, and, unlike the included reverbs in some DAWs, together they leave very little need to go hunting around for external processors—if you can’t find what you need between these two ‘verbs...well, maybe you’re not really trying.