Logic Pro X Compressor: A New Model and a Makeover

Language
Logic Pro X's Dynamics Compressor plug-in got more than a visual makeover in version 10.1. We'd go as far to say it's been born again. Joe Albano covers the new model and other new things.

Among the many new features introduced in the Logic 10.1 update to Logic Pro X, the included Compressor plug-in was born again, with a new face (faces, actually), and a new model joining the the emulations of classic compressor circuit types included in the previous plain-jane version. The fancy graphics have garnered some attention from Logic users, so it's worth taking a look at this updated processor, to see what it's all about. I won't go over the specific controls and basic operation—the functions that remain unchanged—I'll cover just the new bits.

Fig 1 Logic's Compressor: the older design vs. the new look.

First of all, when the new Compressor  showed its face, there was initially a bit of confusion—what happened to the older model, what will happen when older songs that used it are opened, etc. By now, most Logic users have realized that, all appearances to the contrary, this is actually still the same compressor under the hood, and it's 100% backward-compatible with songs that used the version in the plain brown (ok, blue) wrapper. There were also some reports that, despite this fact, people were finding that some tracks that had been mixed with the original version sounded a little different. Eventually, Apple addressed this in the 10.1.1 update, which notes a fix to an occasional bug that might cause the emulated behavior of the detection circuit (peak or RMS)—an option not available in all the compressor models—to be changed in models that didn't have the feature, based on the last settings on the (one) model that does (the generic legacy “Platinum Digital” compressor). This was a fairly obscure bug, but with the 10.1.1 fix in place, full compatibility should now be restored for sounds tweaked with the older version (it always sounded the same to me, I guess I never ran into this quirk).

A New Face for a New Day

There is more to the new Compressor than just its graphic makeover (more on that below), but the new look will certainly convince more people to try it out (instead of running for the nearest 3rd-party plug-in with a photorealistic front panel). Compressor has, for a long time, included six different models—emulations of different compressor circuit types—tucked away in a a simple menu. While they may not be based as literally on specific pieces of hardware as some companies' models are, they do capture the essential character of various classic & vintage compressor designs, and they do it quite well (and not just by built-in plug-in standards). Unlike some modeling, where the contribution of every knob on the front panel is rendered faithfully, the Logic Compressor maintains the same set of controls for all models. But the response is different for the various models—while you may not be able to immediately dial up your favorite settings from a preferred hardware unit, once you get to know it, this comp does offer the wide range of compression characteristics that you'd expect from its hardware counterparts.

This circuit emulation capability was almost a hidden feature with the old skin, making it a kind of secret weapon for those in the know—I'd always said that if Logic added some fancier graphics, to more clearly illustrate which classic units were being modeled, people wouldn't feel such a need to turn to other comp plug-ins. Well, that's exactly what's happened—it's now pretty obvious which classic models are emulated here, and that may help steer more users in the right direction, when it comes to choosing the best compressor type for various processing & mixing applications.

To sweeten the pot, Apple added a seventh model to the existing six that were re-skinned, covering nearly all the classic models that any mixer might want. Based on the graphics, sound & response, and some variations in the feature set for each model, the seven classic compressors on tap here are: 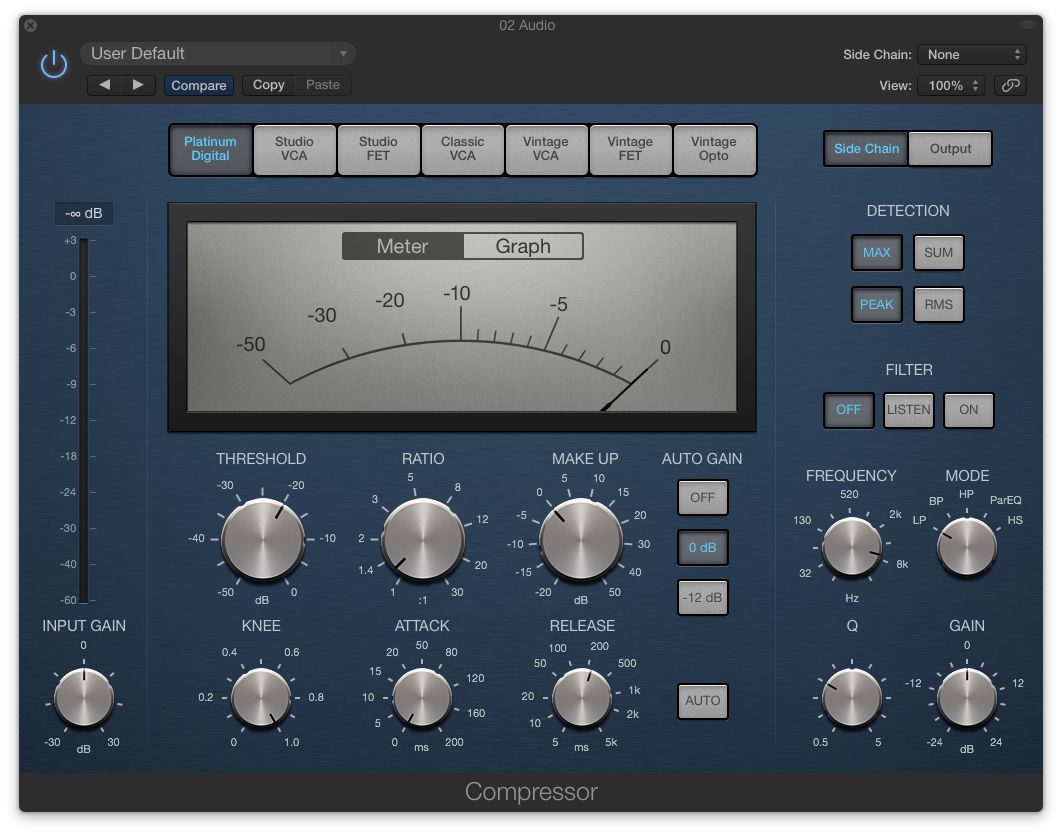 • Platinum Digital: This is Logic's generic digital compressor, kind of a legacy model. It's clean and fast, and if you're not necessarily in the market for a more vintage character, it'll get the job done just fine, without fanfare. 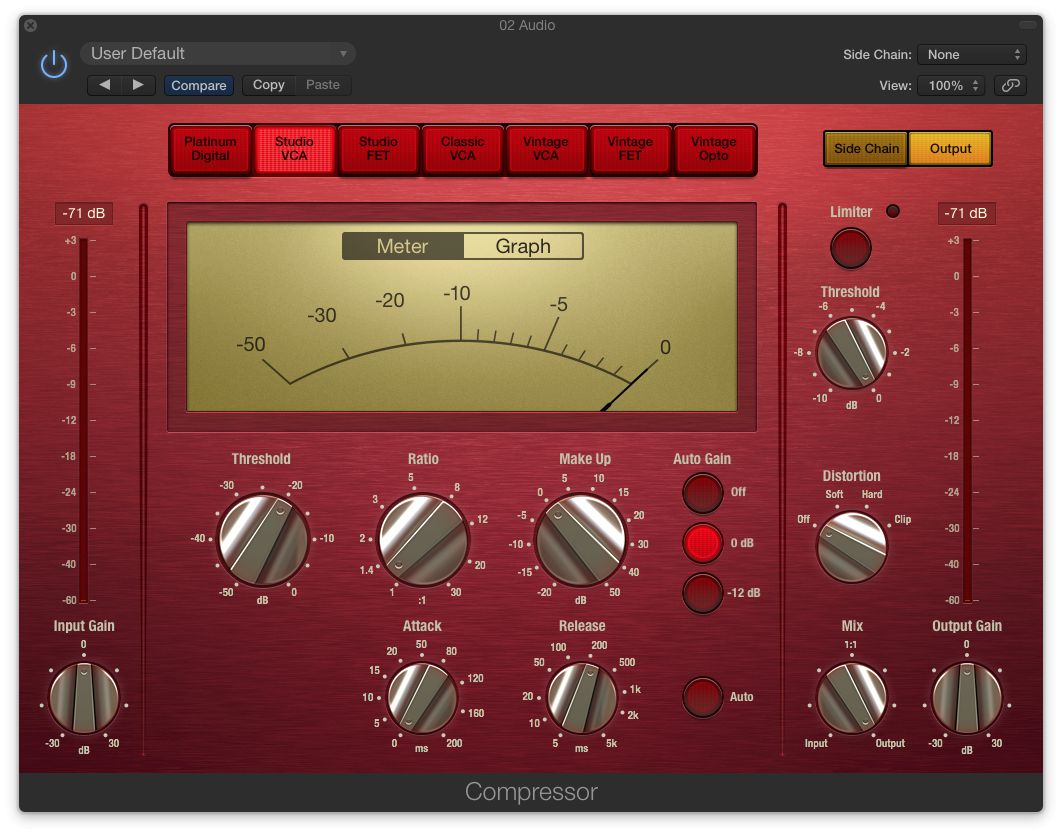 • Studio VCA: VCA compressors are known for being fast and tight—a more modern circuit design than other vintage hardware models. This one most likely emulates Focusrite's Red-series comp, a modern studio classic. 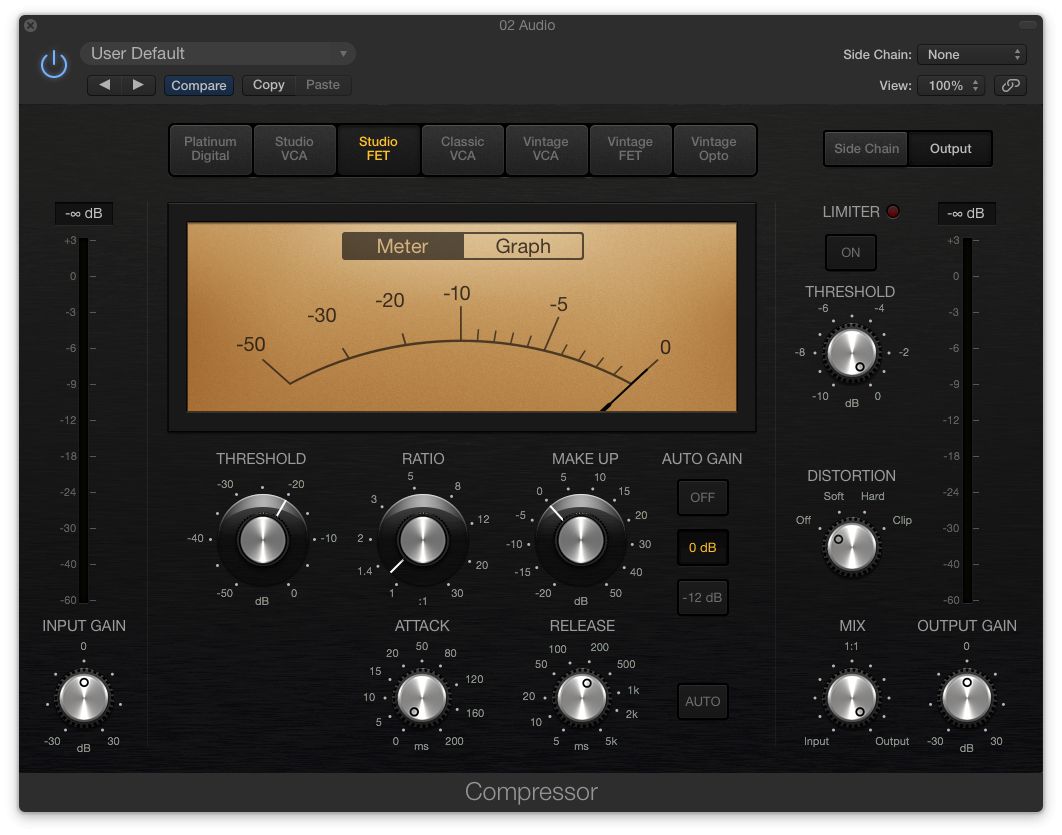 • Studio FET: FETs (Field Effect Transistors) are an early transistor design, utilized in some very highly regarded dynamics boxes. This one is clearly intended to call up the character of the Urei 1176, the dean of FET compressors. The original is fast and aggressive, and can add some real edge when driven hard—it's most famous as a drum compressor, for imparting that aggressive, in-your-face drum sound, but it's great on a lot of other instruments and vocals as well. You can add a little of that subtle vintage distortion, in the Output section—Soft/Hard/Clip options let you choose the degree of edge (this is available for all the compressor models). 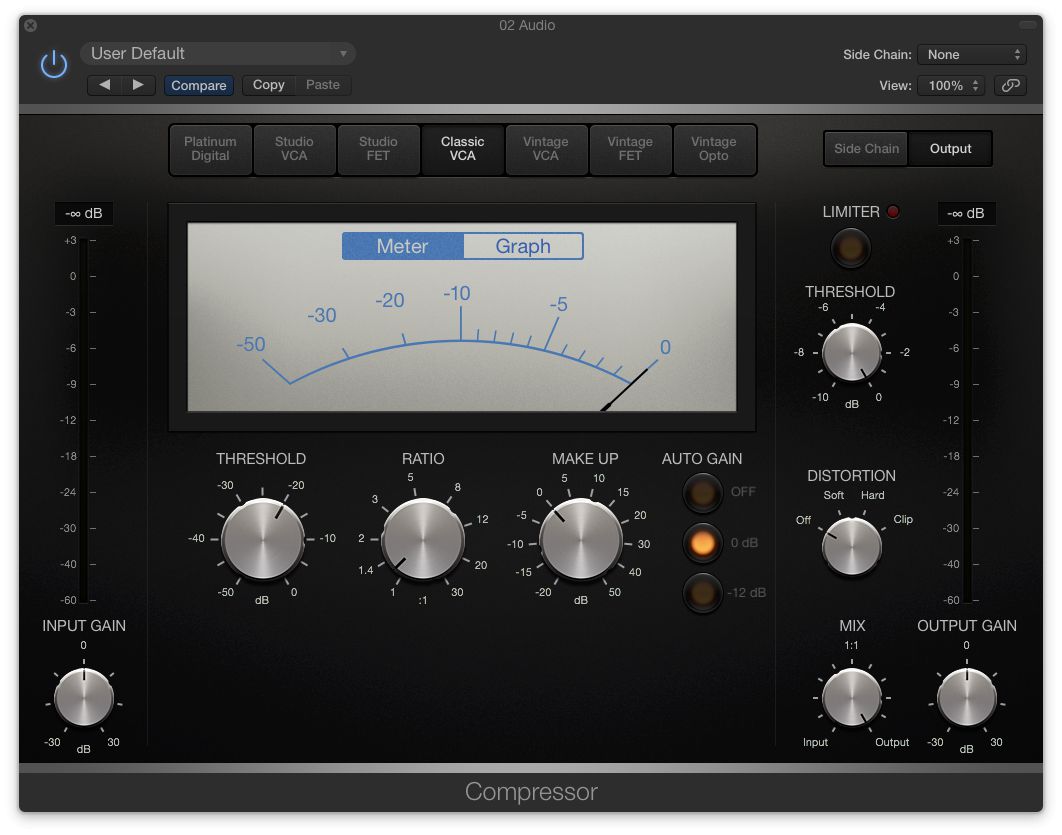 • Classic VCA: This is the new model added, along with the face-lift, in 10.1. It's clearly a dbx model compressor. dbx's David Blackmer was the innovator for VCA comp designs, and their original model, the 160, is prized for its fast, hard-knee response—the ability to clamp down on any signal, making it a favorite for bass & drums, among other uses. But if you were to go by the appearance of the knobs here (and the transfer curve shown), they suggest a later model, the 165, which features dbx's famous “Over-Easy” soft-knee response characteristic. 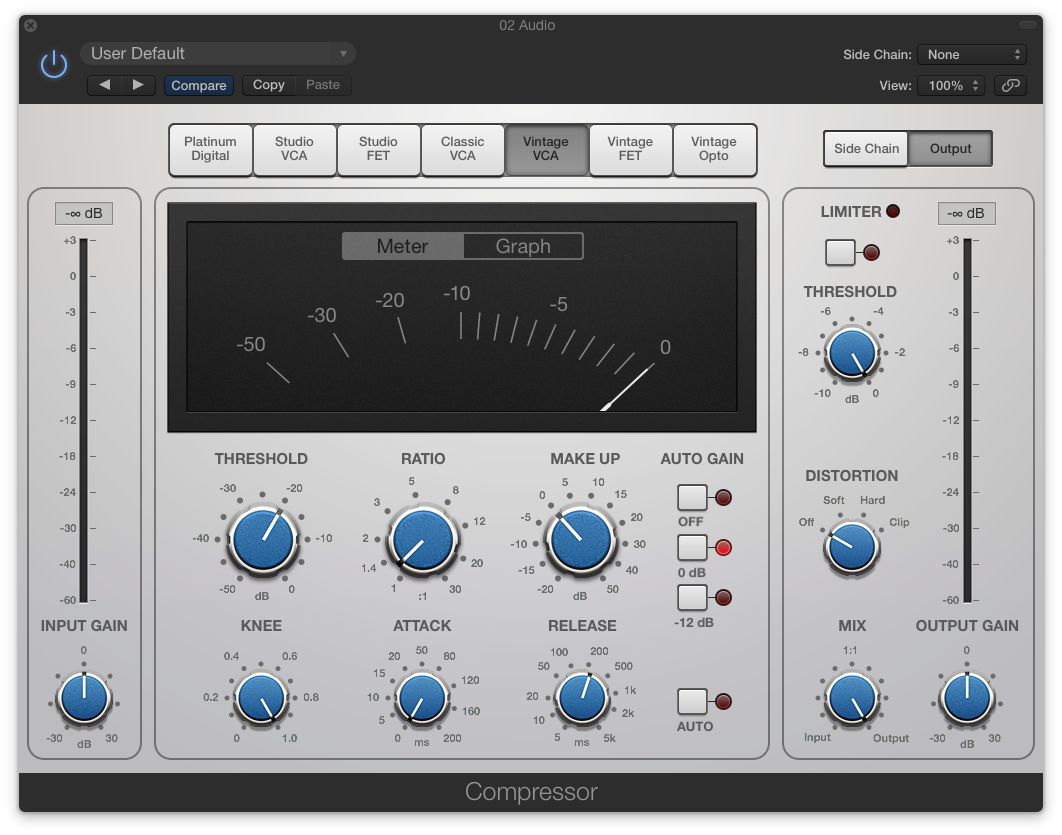 • Vintage VCA: This looks to be an emulation of the other highly popular classic, frequently modeled, VCA comp, the bus compressor from the classic SSL 4000 consoles (also available as a hardware add-on from SSL nowadays). The original unit earned the nickname “the glue”, for its ability to “glue” the elements of a mix together, when used on the master bus. 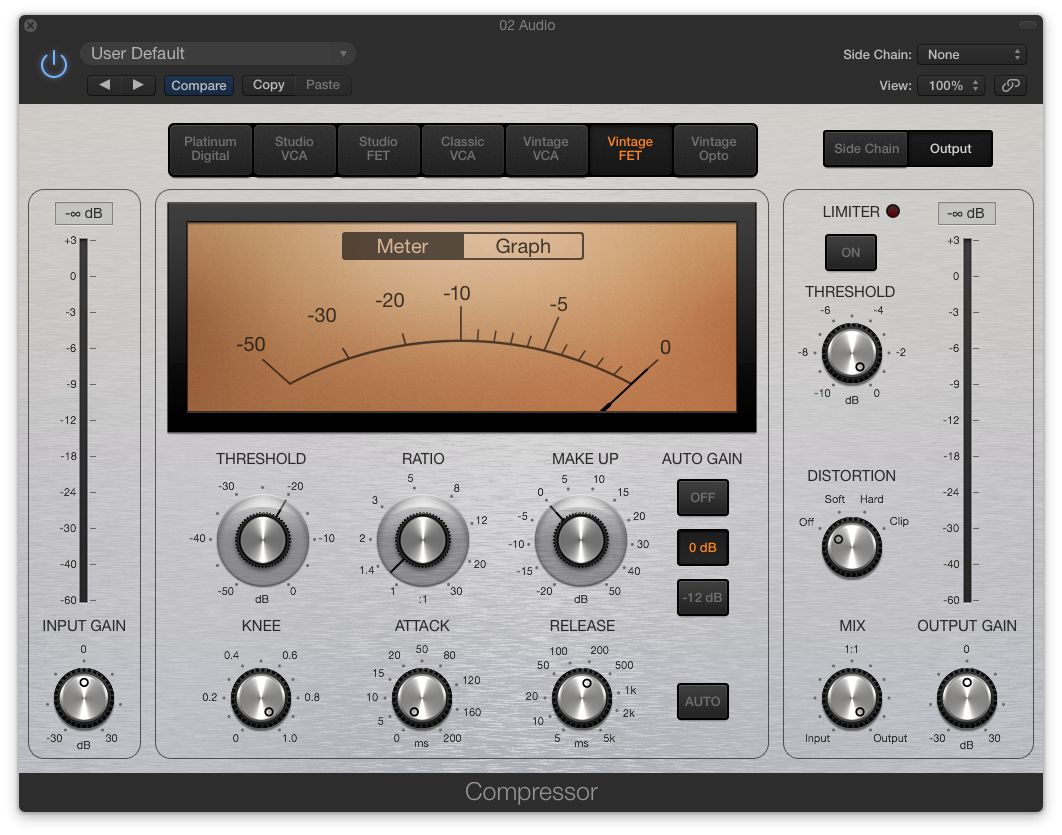 • Vintage FET: Another take on the 1176—from the appearance, one of the silverface versions, possibly an older model. The original hardware went through a series of versions, with various tweaks made to the circuitry—while they all shared the same basic FET character (fast & aggressive), each version has its own specific characteristics. It'd be a good idea to A–B this against the Studio FET on some familiar source material, to get to know the differences in actual use. 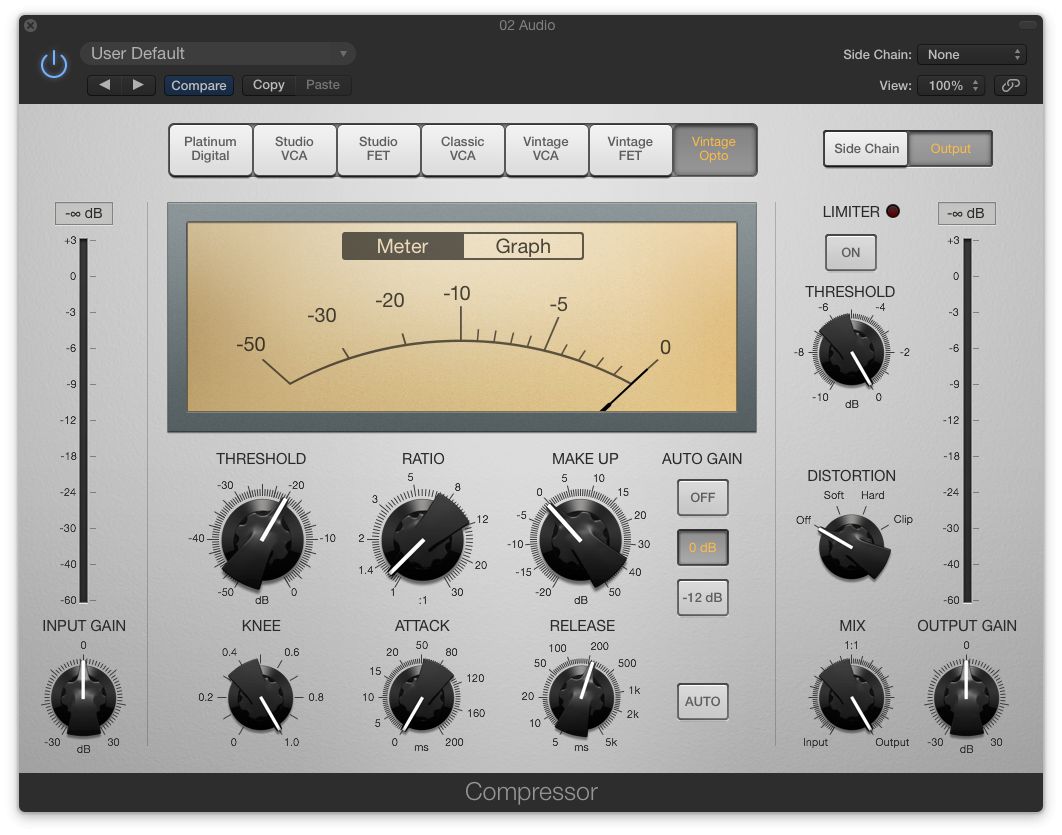 • Vintage Opto : Finally, this is Logic's take on the venerable Teletronix LA-2A, the grand old man of hardware compressors. The original featured an all-tube design and optical circuitry—an internal light and photo-resistive plate control the gain reduction, for a complex, signal-dependent response. Opto compression is great for adding a lot of compression without really sounding “compressed”—it's almost everyone's go-to design for recording vocals. The original LA-2A had virtually no controls—just Peak Reduction and Gain—the response was determined by the optical circuit, making it almost impossible to get a bad sound from it. The Logic model (like more modern opto-compressors) does have a full set of controls—for the most classic take on the original LA-2A, try a slower attack (~ 10 msec) and a slower release, and enable the AUTO button. This last feature makes the release time dynamically follow the changing audio—this program-dependent behavior was (is) one of the secret ingredients of the classic LA-2A.

One classic compressor not emulated here is the Fairchild 660/670, but, hey, if you can't get the job done with what's offered, well...

A Matter of Meters

Besides re-arranging the display of the knobs and buttons, the new look brings the “extra” controls (formerly in the tab-down at the bottom of the old design) to the front panel—these include the distortion and parallel compression (Mix) options, and the side-chain filter settings. The makeover also makes it clearer which controls are functional with which models. The other new feature is new metering. Instead of the simple (though useful) LED ladder, there's now a great big VU-style gain-reduction meter, in keeping with the vintage vibe. This display can be switched to show the transfer curve—included in the old design, but it's now animated, showing the changing signal (not the first display to offer this, but a welcome addition nonetheless). To the right of that is a histogram, showing the changing level—the gain reduction—being applied to the signal. This kind of display has always been popular in mastering plug-ins, but it's nice—and informative—to have it here. 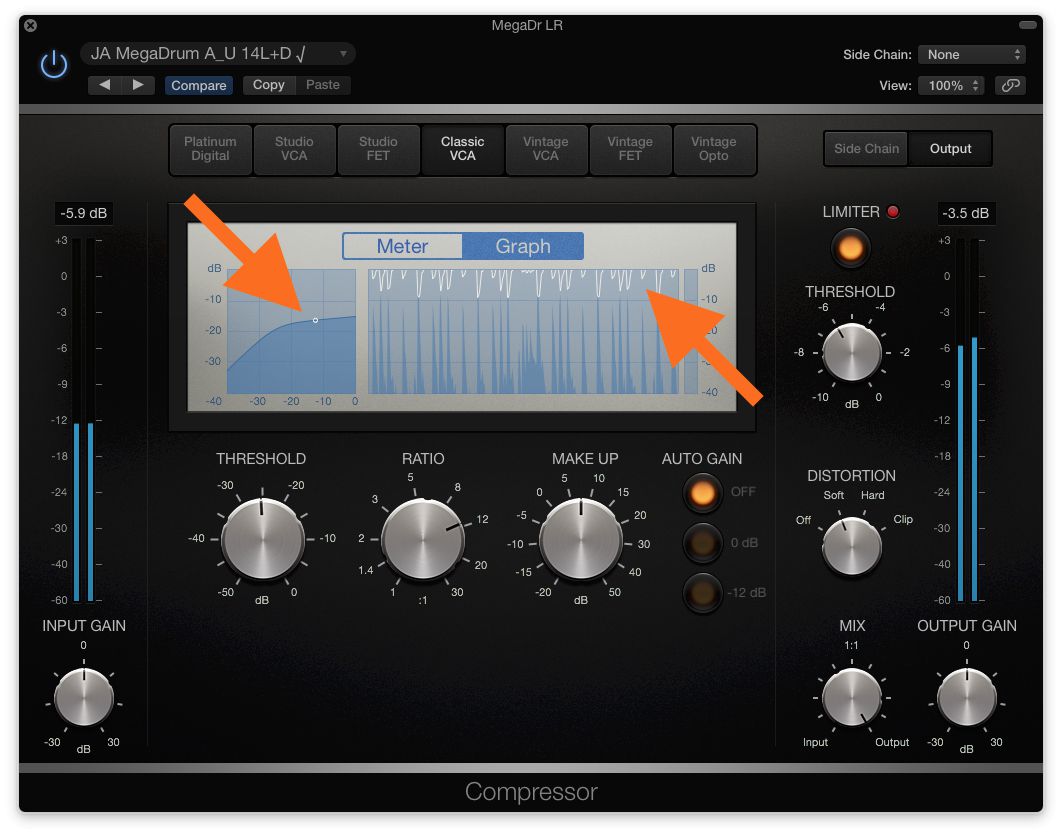 So that's what's new and what's not in Logic's “new” compressor. While most of the changes are cosmetic, they should make the comp easier to use in the heat of a mixing session, and the new dbx model is a welcome addition to the arsenal of tools. If you're not one of the cognoscenti, who've always used and loved this little Compressor, maybe now's the time to really get to know it.