Language
One of the more exciting features in the recent Logic Pro X 10.0.7 free update are the new automation capturing commands. Being able to create automation points will only make mixing more fun!

There are many ways to create automation nodes/control points in Logic Pro X. One of my favorite methods has always been to use the automation toggle key command Control-Command-A. This great command allows you to capture nearly anything you can twist, slide or press while Logic is playing, but what if you want to be specific about your placement of automation points? Logic Pro 10.0.7's new commands allow you to easily write automation precisely where you need it.

When mixing, mastering or producing, sometimes it's easier to place a control point exactly where you want it to be. For example, a sound in your song might always be a specific volume level on the choruses, but a different level on the verses. Or a sound's panning might be centered on an instrumental section, but panned to one side when the vocals play. You might use sends on a track that are at different volume positions.

Sometimes I'll set the filter cutoff on a software instrument to different positions to add animation to a sound. Before the new Logic Pro 10.0.7 update, you had to physically draw the points in by hand to do this, or record them live. Now you simply use Logic's four new key commands to capture the current position of a track's volume, pan, send and currently visible parameter. Think of them like snapshot automation, but unlike a traditional snapshot, you're not recalling a saved state, you're simply capturing the parameter's current position as automation. Since these commands are not set by default, let's set them up now.

Press Option-K to open the Key Commands window and in the top right search field, type in “create automation.” You'll see the four new unassigned commands below the older “at region border commands” as shown in the screen shot below.  If you've never used or intended to use the older “at region border” commands, then these are excellent choices to borrow from! If you do however use these older commands try using Shift-1, Shift-2, Shift-3, and Shift-4. To assign the commands select each one, press the “Learn by Key Label” button, and then the combination on your Mac's keyboard. 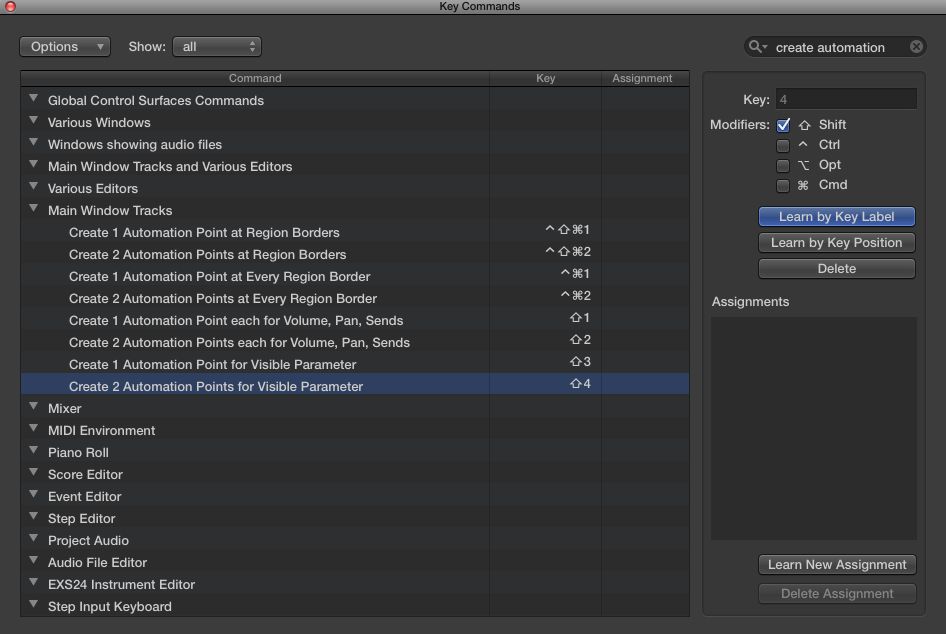 If you'd prefer to use menu commands, you can find these under Mix > Create Automation > ...

Now that you've set these great new commands, let's use them. Open an existing song without automation already written, and toggle the automation view by pressing the A key. Move the timeline to the start of a section in your song, then set the volume, pan position, and any send levels. Use your command for “Create 2 Automation Points each for Volume, Pan, Sends.” Move the timeline to another area of your song adjust the volume, pan and sends to another value and use the command again. All three (or more depending on the amount of sends on the track) are written as automation points in the positions you selected! I chose the 2 point command because I want my automation written in blocked sections. If you want your control points to slope up/down to their new positions use the 1 point command. 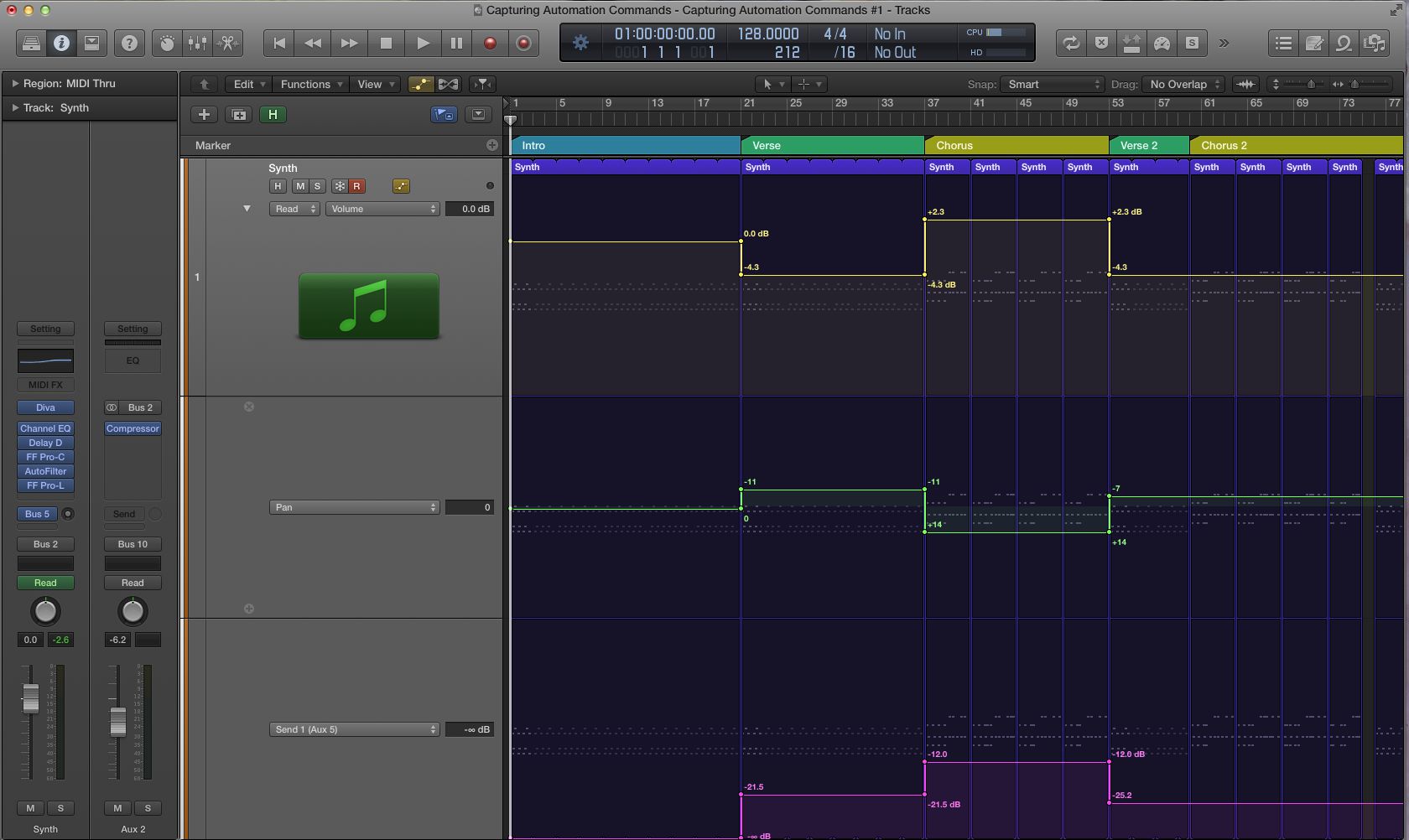 Now let's use the other new command “Create (one or two) Automation Points for Visible Parameter.” Choose a parameter you'd like to automate on one of your tracks. I've chosen the Auto Filter's cutoff on mine by selecting it from the automation select menu. 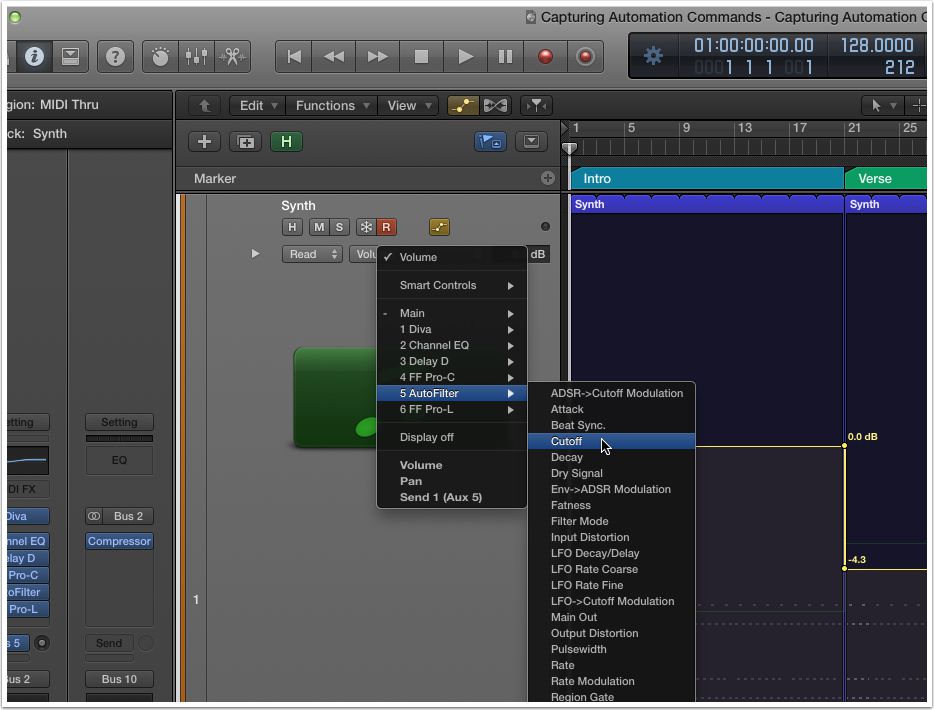 If you're automating a plug-in parameter, open the interface for it so you can visually set its value. Use the key command you chose for “Create 1 Automation Point for Visible Parameter.” Now move the timeline to a new position, adjust the parameter (Auto Filter cutoff in my case), then use the command again. In this case I chose the 1 point option so the cutoff on Auto Filter smoothly transitioned to the next value (have at least one automation point already placed when using the “1 point” commands). Try using 2 points for cool sounding “blocked” step sequencer animations. 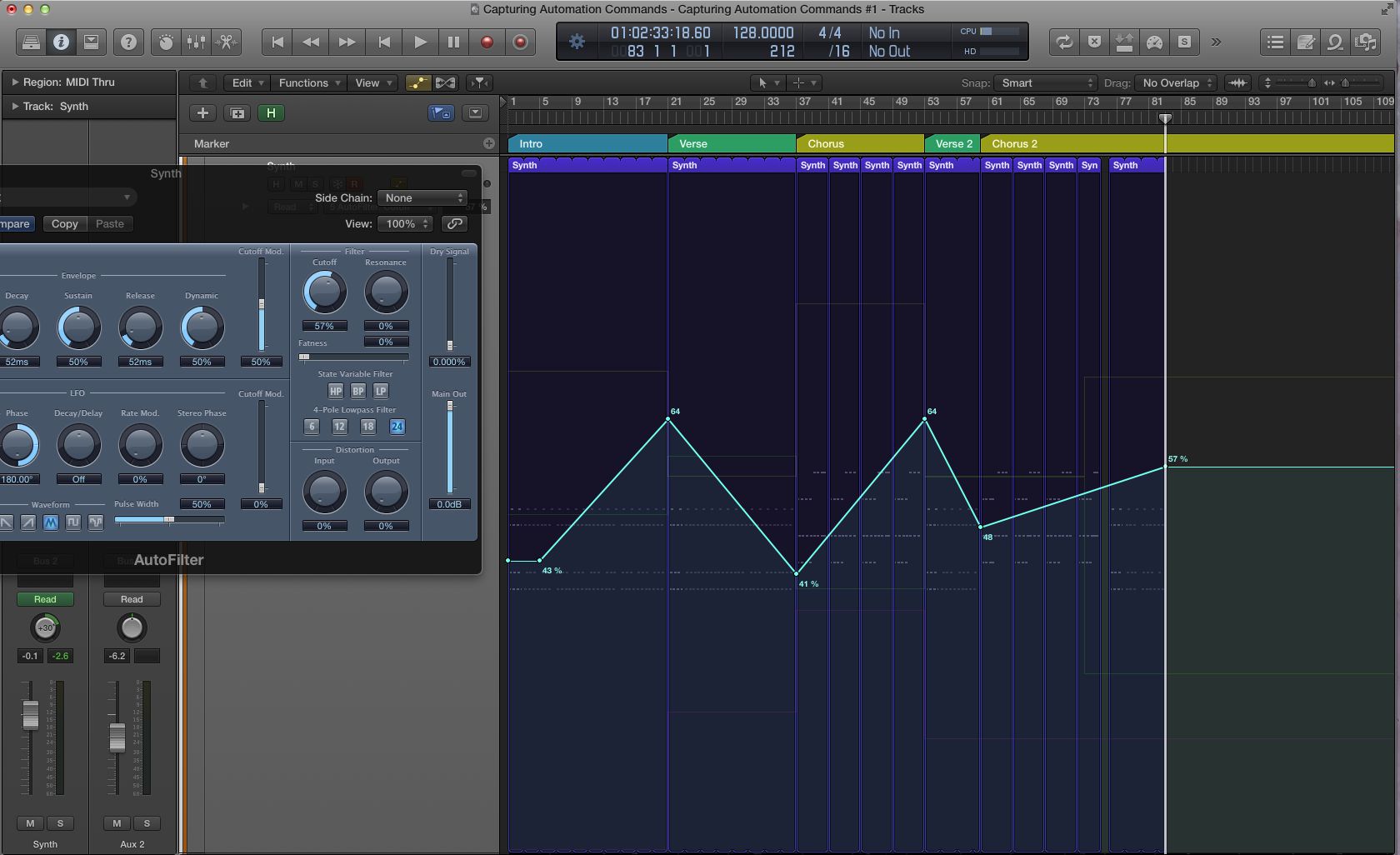 And that's all there is to it. These 10.0.7 automation commands add a convenient new workflow when producing and mixing in Logic Pro X.

Learn more about mixing and automation in Logic Pro X in this video course:

The problem for me is as follows: I invoke the first 'create 2
automation points each for volume, sends and pan' command. This does as
expected and also puts the track into Read mode. I then move the
playhead to where I want my changes and I try to adjust my fader and
sends etc. When I try to dial in my new parameter values, the volume,
sends and pan just snap back to where they were.

The only way I can get it to work is each time I invoke the 'create 2
automation points each for volume, sends and pan' command, I need to
turn off automation for that track to take it out of read mode. It's a
bit annoying though, having to click it off each time I move the
playhead to write new automation.

I'm wondering if I need to change another setting or something...