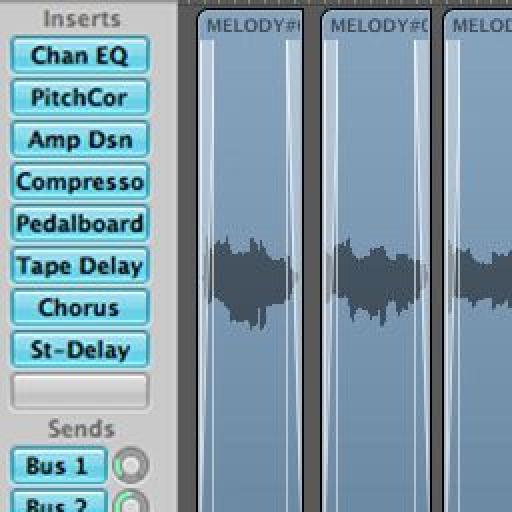 Language
Hum or sing rough melody lines into Logic Pro and then learn how to transform them into synth, bass lines, or much more. Gary Hiebner shows you how in this fascinating workflow exposÃ©.

I often find that I come up with melody lines by recording a scratch vocal of the ideas that I have. They can by hums, ahhs, or ohhs. Most often I replace these ideas later with proper vocals or translate them to synths, bass lines, etc. But why not make use of these scratch ideas? I find that by heavily processing these sounds, you can incorporate the newly developed sounds into your productions. I will demonstrate this process in Logic, but the same steps can be applied in any other DAW.

Here is a track I am working on. I have recorded a scratch vocal idea that forms a nice melody. I would like to incorporate into the track:

Here is the vocal soloed:

First, I cut out the sections of the audio region where there is no vocal, as these sections may contain low-level noise that may be increased with the added processing to the audio. I have added fades to the start and ends points of each of these regions for smoother transitions between the regions. 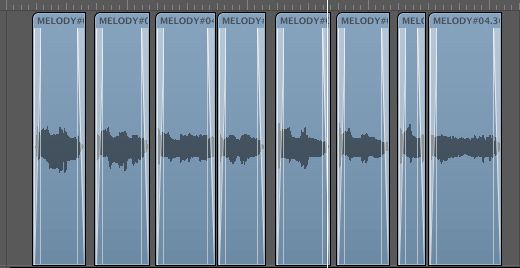 I have inserted a Channel EQ and have rolled off the low-end rumble with a low cut set to about 530Hz, and I have added a slight peak at 5100hz to bring out the vocal character. 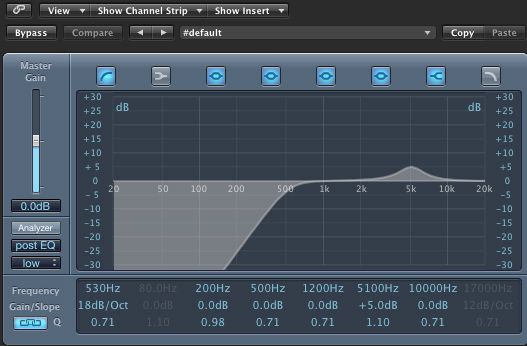 Take a listen to the corrected scratch vocal now:

Next up is to add some amp simulation and distortion processing. I find that these type of plugins add rich harmonics to vocal scratch tracks, and change them from sounding like a voice, to a more synth oriented sound.

I have used Logic's Amp Designer for the amp simulation. I have chosen a Large Tweed amp simulator, combined with a Tweed 4 x 10 Speaker. I have tweaked the settings on the amp by increasing the Gain, Treble and Presence controls.

To tame the peaks in the now more gain-oriented sound, I have added a Compressor.  I have used the VCA circuit type with a ratio of 2.1:1, and a Threshold of -22.0db. Test out what Attack and Release suits your audio file. I have chosen fast Attack and Release times. Take a listen to the heavily distorted sound here:

Now time for the modulation effects. First I have added a Tape Delay effect. The delay has a ¼-note sync rate. I have increased the Feedback to 36% with a Wet setting of 19%. I have also added some LFO Rate and LFO Depth and have set the Flutter Rate and Flutter Intensity accordingly to add an analog delay style to the effect. 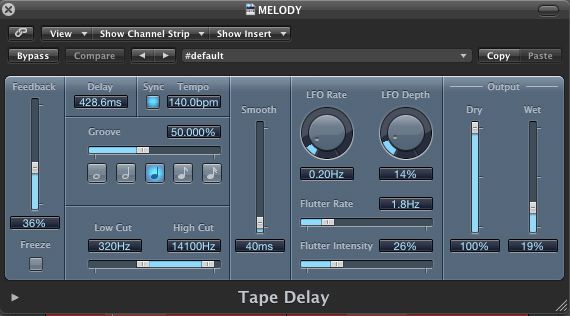 Lastly I have added a Stereo Delay to spread the sound around. The Left and Right have different Wet Mixes to create differentiation from the Left to the Right sides of the mix. Take a listen to the audio now with the modulation effects:

You can take it a step further and add some bus effects. I have a Space Designer reverb, which I have applied to my other channel strips so that the sounds appear to be in the same room. I have applied a heavy dose of reverb to this sound. I also want to apply some phaser modulation to the sound, but I want to be able to mix the dry and wet signals together. I have opted to add the phaser to an auxiliary channels and to send the bus levels from the audio channel strip to this auxiliary channel.

I have used Logic's Microphaser on the auxiliary channel. It has a LFO Rate of 0.22hz; a Feedback of 37% and the Intensity is set all the way to 100% because it is applied as a send effect.

On the audio channel strip I have increased to bus send to the phaser to about 50%. Take a listen to the sound now:

And here is the processed scratch vocal with the rest of the track:

As you can see by applying some effects in your DAW you can transform a rough audio track into something completely different that can really add to your productions. Test out these tricks and see what happens!

Check out the following tutorials for other audio processing and manipulation techniques: