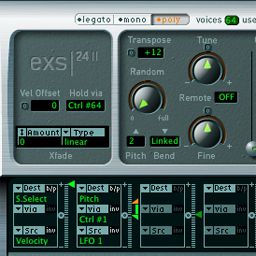 Language
The Yeah Yeah Yeahs use hardware synths & guitars to create their brand of pop-rock! Richard Lainhart shows how to re-create the synth line from Heads Will Roll using Logic Pro's built-in instruments.

For this Logic Sound Design article, we're going to be recreating the introductory pad sound from the Yeah Yeah Yeahs "Heads Will Roll". You can hear and watch it here:

This keyboard intro is in Ab minor, at a tempo of 132 bpm. Here are the notes in the part, as best I can hear them, first in music notation, followed by the piano roll version.

Note: what the keyboard player is shown playing in this video is not the actual keyboard part!

Now let's see if we can figure out what's going on in this sound. It's based on bowed strings, clearly, although not "real" strings'"quite possibly a Mellotron sample, or maybe an orchestra sample, or some sort of string synthesizer (if Logic included a nice Mellotron string sample, we'd be mostly there. Too bad it doesn't). There's also some kind of modulation applied to the strings, maybe a flanger or chorus or some combination of those, and some distortion. And it sounds like the basic string part may be doubled and transposed up an octave, as there is a significant high-frequency component to the sound. We'll start there and see where it takes us. There are many ways to approach creating this sound, and this is only one of them.

Start by creating a new empty project, with a single software instrument track. Load the EXS24 Sampler instrument into the track, and choose Pop Strings > Arco Strings as the sample set for the track. We'll use this as the basis for creating this sound.

Next, enter in the notes in the part, either by playing them in or entering them in the Piano Roll or Score editors. This part doesn't have much in the way of dynamics in it, so you can play or enter the notes in with the same velocities throughout. Name the track "HWR Main" so we don't get confused later.

Open the window for EXS24 to reveal its editor; we're going to make a slight change here. If you play the part with the default Arco Strings settings, you'll hear a pronounced bow attack at the beginning of the sound that isn't in the original part.

We want to get rid of that attack, so we'll just increase the attack time to conceal it. We'll get that sharp attack back later with processing.

In the EXS24 window, drag the bottom green ball for the "A" slider for Envelope 2 up to near the halfway point'"the actual number that comes up in the value pop-up is 221.59ms, but you don't need to be that precise'"it should be just long enough so that the bow attack is removed, but the overall attack isn't too slow:

We can leave all the other settings as they are.

Next, with the HWR Main track selected, click the New Track with Duplicate Settings button just above it to create the second track. Call it HWR Octave. Then hold down the Option key, click on the note region in the first track , and drag it straight down into the second track to duplicate all the notes.

Next, with that second track selected, go to the Inspector just to its left, click on Transposition, and choose +12 to transpose it up an octave. Then double-click the MIDI note region for the track to open the Piano Roll editor, select all the bass notes in the region (the notes below C2), and delete them; we only want to double the upper chords in the first track, not the bass notes. Your track should now sound like this:

Next, we're going to be applying a series of effects to the output'"the mix of the two tracks'"to try to get closer to the original sound. To my ears, there's some compression, some EQ, and some chorusing, which we'll apply and adjust in turn.

To start, open the Mixer for your project, click on the first plugin insert slot for the Output strip, and choose Dynamics > Compressor > Stereo. Load the FET Electric Piano preset as the starting point for the compressor.

Next, set the following parameters as follows: 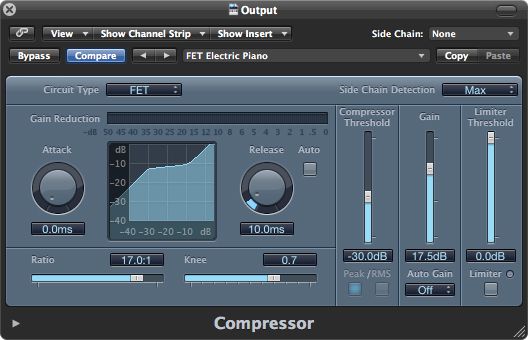 Now if listen to the mix, you'll hear something quite a bit closer to the original: we have a similar distortion, those slowish attacks we made back in ESX24 have been sharpened up and made more Mellotron-ish, and the overall track is louder and "flatter".

Now we need to EQ the sound a bit to more closely match the original. Click the next plugin Insert slot in the Stereo Out strip and choose EQ > Channel EQ > Stereo. We're going to reduce the bass a little to thin out the mix, and add a midrange peak while boosting the top to brighten it up a bit. Click on the bottom-most band and drag it down to reduce the bass frequencies. You can do this in the graph or in the Frequency-Gain/Slope area under the graph. Then add a peak at around 1800 Hz, and a further high-frequency boost above 5400 Hz (this is all subjective, naturally, and just based on listening and comparing). Here are the settings I'm using: 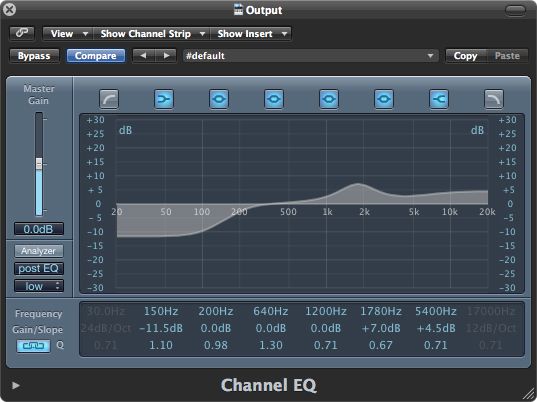 And here are the results:

Our almost-final step is to add some modulation to the mix to add that bit of motion we hear in the original. So, click on the next Insert slot for the Output strip, and choose Modulation > Ensemble > Stereo. Then choose the Synth String Ensemble, which to my ears doesn't need any tweaking. And then, finally, in the Mixer, boost the level of the Main track just a bit (1 dB or so) and mix down the Octave track by 1 dB, to balance the voices a little better (again, let your ears be the judge here).

And here's our final track, which to my ears is quite close to the original:

I encourage you to experiment with all these settings to see if you can get the track closer to the original or, of course, to come up with your own sounds. And as always, have fun!

davelopez
Thanks, Richard. Excellent tutorial as usual. Just a touch more edge (distortion) and it will be spot on.
Rounik
This is a great tutorial! Thank you Richard Lainhart, RIP.
Lavaita
It's the Roxy Music Effects tape on the M-Tron Pro plugin, but you have to turn it into audio and speed it up to fit the track.