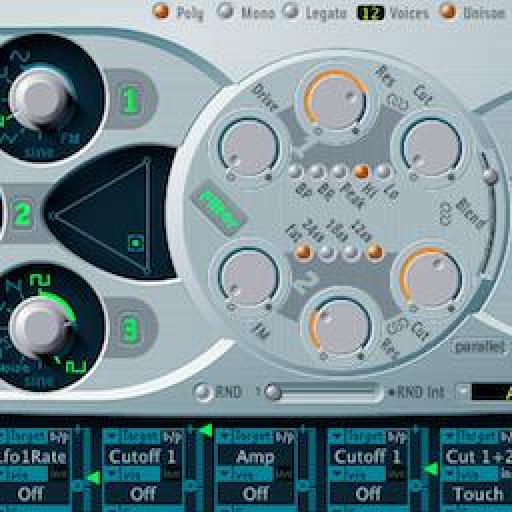 In this sound design blog I'm programming the vector points in Logic's esteemed ES2 soft synth.  We musicians are expert vector creators, by our very nature, because melodies, in a sense, are a kind of vector.  A note, by itself is a point in space.  String a bunch of those "points" together in time (with their individual pitch, loudness and timbre as their magnitudes) and it's a perfect example of a vector.  However, in the ES2, we can program much more that mere melodies.

So where the heck is the ES2's vector area?   It shares the same virtual space as the router section.  (See Vector Geography graphic)  I toggle between them using the selector switches located on the right of the interface.  Both sections are active at the same time whether or not they are visible on the faceplate.  When "Vector" is selected the horizontal display turns into a timeline with points.  Between each point is a programmable time value. These values determine how the vector to moves from point to point, sequentially from left to right.  The "shape" of the timeline between the points is also programmable, determined by the global "Curve" menu located below the timeline.  This complex series of points and the space/time shapes between them is called the vector envelope.

Every point along the timeline stores MIDI cc values for many of the parameters on the ES2:  filter settings, pan positions, overdrive amounts, mix levels, digiwaves or any of the 31 possible targets.   Each of the ES2's vector points can store three different independent MIDI values at the same time, routed to three different synth parameters simultaneously.  Control clicking on the timeline reveals a contextual menu that allows you to insert a single point or as many as sixteen (the maximum) points at a time.

The Shape of Things to Come

Once I've got the points, the ES2's vector points are programmed graphically using the mix triangle and the X/Y square.  Take the triangle.  The ES2's 3 oscillators flow into the mix triangle which is located directly to their right.   Inside of the triangle is a cursor that determines a 3-way proportional mix of the oscillators.  This mix is one of the three magnitudes that can be stored in each vector point.   Before I start programming I always enable Solo Point, (Web Link 1:  Vector Geography) which locks the vector to the selected point, making it a breeze to program.  Otherwise the vector envelope will start its cycle every time a key is struck.

So I click on a vector point in the timeline, then I position the cursor of the mix triangle.  There, I've programmed the first magnitude of that point (remember, each vector point stores three).  The other two magnitudes are programmed using the X/Y square.  The "square" is essentially a joystick-like interactive graphic located on the far right of the ES2.  It works similarly to the triangle with one added feature:  like a joystick, the X (horizontal) and the Y (vertical) values can independently control any of the 31 targets assigned in the vector's X/Y square router.  Once I've picked my targets and set their intensities, I position the X/Y square's cursor.  Now I've programmed the other two magnitudes!  Below the vector selector switch is the all important "Mode" menu.  Its four selections determine how the shapes interact with the ES2: Off, Mix (triangle), X/Y (square) and  Both.

Once the points are programmed I connect-the-dots in all kinds of crazy ways by programming the space between them.  This is where I create the vector's rhythm, shape, loop and timing by using the array of controls located beneath the timeline. If you want to learn more about vector synthesis and all of the other hidden secrets of the ES2 you'll find a  bunch of helpful videos to get you started in my ES2-Exposed tutorial.

Rounik
Great tips on the ES2's Vector synthesis Steve!
Good to see you on the blog too :)