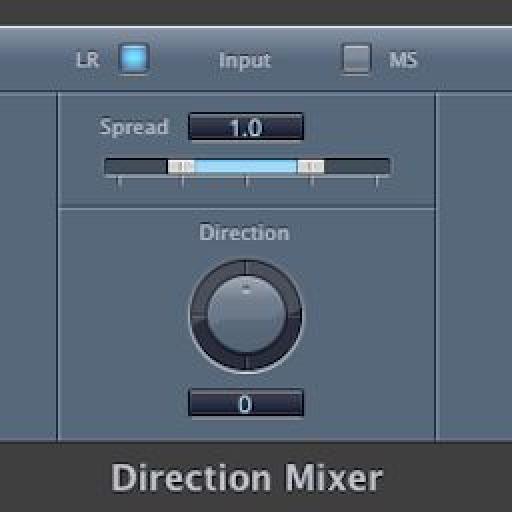 Language
Panpots in Logic don't behave the same for mono and stereo channel strips. Peter Schwartz gets to the heart of the mix in Logic Pro and demystifies pan and balance in this excellent article.

How much confusion could one little knob cause? Turns out the answer is "a lot" when the control in question is Logic's panpot —the ubiquitous, unlabeled round control located at the top of the fader on almost every type of channel strip. See, sometimes it's a panpot and other times it's a balance control. When is it which one? I'll explain...

In the word panpot, "pan" is short for panorama, a term normally associated with a vista view, or in the film world, camera movements. The parallel for audio is how sounds are positioned in the sonic landscape bounded by left and right speakers. And "pot" is short for potentiometer, the technical name for the actual rotating electronic component underlying any circular knob in a hardware mixing board. Speaking of which...

The virtual mixer and channel strips in Logic and many other DAWs are modeled after real world, hardware mixing boards. The channel strips on traditional mixers are typically mono channels, though in Logic, channel strips of all flavors (instruments, auxes, and audio channels) are very commonly configured in stereo. But whether hardware or software, it's important to understand how the panpot control functions differently for mono and stereo channels.

Mono channels are pretty straightforward: they provide control for a single channel of audio such as vocal, guitar, bass, or other instrument which has only one output. Here, the panpot lets you move the position of a sound anywhere in the stereo field. Hard left, hard right, up the center, or somewhere in-between.

On a stereo channel, however, the panpot can't be used for panning because... well, we'll get to that shortly.

Let's image you've placed a single microphone outside, facing the street. The sound of a car approaching from the left starts out softly, getting ever louder as it approaches the mic. The volume peaks when the car reaches the mic position and fades out as it speeds off to the right. With only one microphone you wouldn't be able to capture the directional movement of the car's travel. But if you laid up that recording on a mono audio channel in Logic, you could mimic its original left-to-right movement by physically turning the panpot as the sound plays, starting with the pot hard left and moving it to the right to match the sound of the car's original motion.

Had you recorded the car with two mics — one facing left and the other facing right – you'd be able to capture the natural directional movement in the recording itself without having to resort to simulating that motion after the fact.

Naturally, you'd want to lay up such a stereo recording on a stereo channel. And to get the maximum stereo movement of the sound between speakers, the left mic's signal must be played exclusively out of the left speaker (panned hard left), right channel exclusively out of the right (panned hard right). There are no panning controls available on a stereo channel strip to do this, but there's no need to: this hard left/hard right assignment occurs automatically when you play a stereo audio file from a stereo audio channel.

Still, we see a panpot on the channel strip on stereo channels, but in this case it isn't a panpot at all: it's a balance control.

Moving a balance control to one side maintains the level of the sound on that side while turning down the volume on the other side. That's it! Oh, and it does this without changing the hard left / hard right panning of our audio. It's really no different from how a balance control works on a stereo system.

Let's say we wanted to have both sides of the stereo car sound play only out of the left speaker exclusively. Here, the balance control won't be useful at all, because turning it to the left would simply fade out the right channel's signal. Not what we want. But balancing can sure come in handy to help even out the volume in a stereo recording where one side is too loud with respect to the other. For example…

On a recording of a rack of five toms miked with a pair of stereo overheads, it turns out that the toms on the far right are louder than the ones on the left. A quick fix would be to move the balance control slightly to the left, thus lowering the volume of the sound on the right, all the while maintaining the hard panning of the left and right audio channels.

So... can a stereo signal actually be panned at all? If so, what would that sound like and how can we do it? Fortunately, these questions are all easily addressed by one of Logic's plugins, the Direction Mixer. 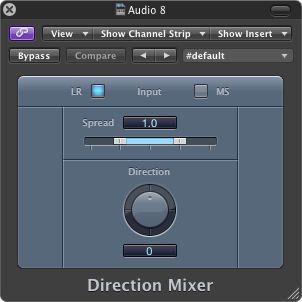 In Figure 2 we see the Direction Mixer's controls for Spread and Direction (we won't be covering the MS feature in this article). Spread lets us adjust the overall stereo width of the sound. The default value is 1.0, and values lower than this tend to make the sound more mono. I often use this feature to narrow the stereo aspect of piano samples, which more often than not are programmed with the lower notes panned to the left, higher notes to the right (annoying!).

A Spread value of 0 collapses the sound to mono, meaning that left and right channels are played out of both speakers equally, while values above 1.0 will artificially expand the perceived stereo width.

Next we have the Direction control, which I generally think of as a means to “rotate” or cross-mix the signal between left and right channels. At a setting of +90, the left side is rotated entirely to the right, producing a mono mix of L & R signals that plays exclusively out of the right speaker (hard right). The opposite is true for a setting of -90, and this is the perfect solution for achieving the scenario I described earlier for getting both sides of the car recording to play exclusively out of the left speaker.

At a setting of + or - 180, the left and right signals are swapped. Set this way for our stereo, left-to-right car recording, the sound of the car would now appear to travel in the opposite direction!

Life is a Stage, and the Players are Moveable

Setting the Direction control in-between 0 and 90 (in either direction) has the effect of partially rotating the left and right channels in the direction of the control. One of my regular uses for this is to alter the perceived stage position of sampled orchestral instruments. It's very typical for sample library developers to record instruments in stereo but also in a way that captures the "natural" placement of the instruments on the stage. For example…

Samples of a first violin section (positioned at the conductor's left) will feature a predominantly “direct” instrument sound on the left, while on the right we'll hear a predominance of room ambience. In other words, the sound will be left-heavy. This can be really annoying, frankly, for many times such pre-panning isn't appropriate to some of the styles of music I write for.

The quick and easy fix for centering the sound is to instantiate a Direction Mixer and turn the Direction control slightly to the right. This simultaneously rotates the left channel's left-heavy direct string sound more towards the right while the right channel's ambience towards the left. Note that this approach tends to make the sound a bit more mono, and on the rare instances where that's a problem, a little additional reverb can be added to fill out the stereo spread.

Magic Fingers
Great article... It's amazing (thanks to this article) how many more uses I now have for the direction mixer. Whether its recreating the sound of a live orchestra, or simply taming a sampled instrument's (like Bass Guitar) width/spread, I think I've found the tool to use before searching through more sample libraries. What a time saver for all aspects of production! Thanks Alot!!!
Peter Schwartz
Hi Magic Fingers, I'm glad you found my article useful. Go ye forth and direction mix! :)