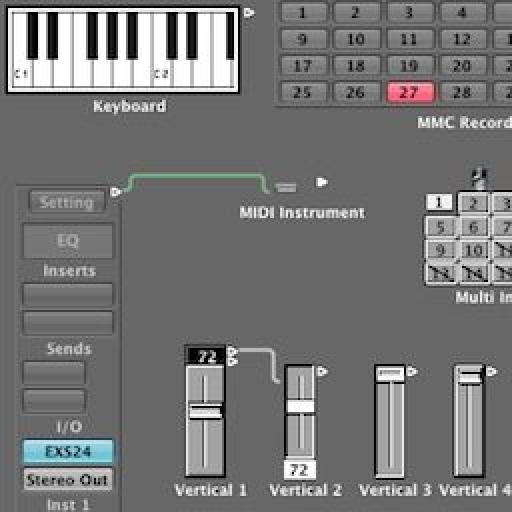 Logic and The Environment, Part 1: The Simple Truths

Language
What is Logic's Environment? Does the mere mention of it strike fear into your very soul? Peter Schwartz is here in this Logic series to banish misconceptions and break it all down nice and easy.

Many Logic users fear to tread in the environment. Feeding the fear are long-standing misconceptions about what the environment is and how (supposedly) complicated it is. And more than a few people have paid tribute to the environment by visiting internet forums and expressing their heart's desire that in future versions of Logic, we will no longer find an environment.

But there's no requirement for any Logic user to ever pay the environment a visit. And much of what goes on in there is transparent to the user, as it should be. However, if you're reading this article, it's probably because you want to learn more about the environment and discover if there are ways it can facilitate and enhance your creativity. It surely can!

In this, my first article in a series on this fascinating aspect of Logic, we'll start by learning some basic concepts. Then, in subsequent articles, we'll examine the function of various specialized environment devices, and delve into some advanced environmental exploits that have very practical musical uses.

Environmentalism is Local, not Global

And it's not Logic that has an environment, per se. Rather, each project has its own environment, and altering Project A's environment will have no effect on Project B.

In fact, the state of the environment in any project – especially at the beginning stages of a production – is constantly in flux and that's perfectly normal. See, the environment is where all of your channel strips, auxes, instruments, arpeggiators, and various other virtual studio devices actually live. So whenever you add or delete audio channels, instruments, or a MIDI processor such as a chord memorizer, you're changing the project's environment. And that's nothing to worry about. It's just another day at the office for Logic. 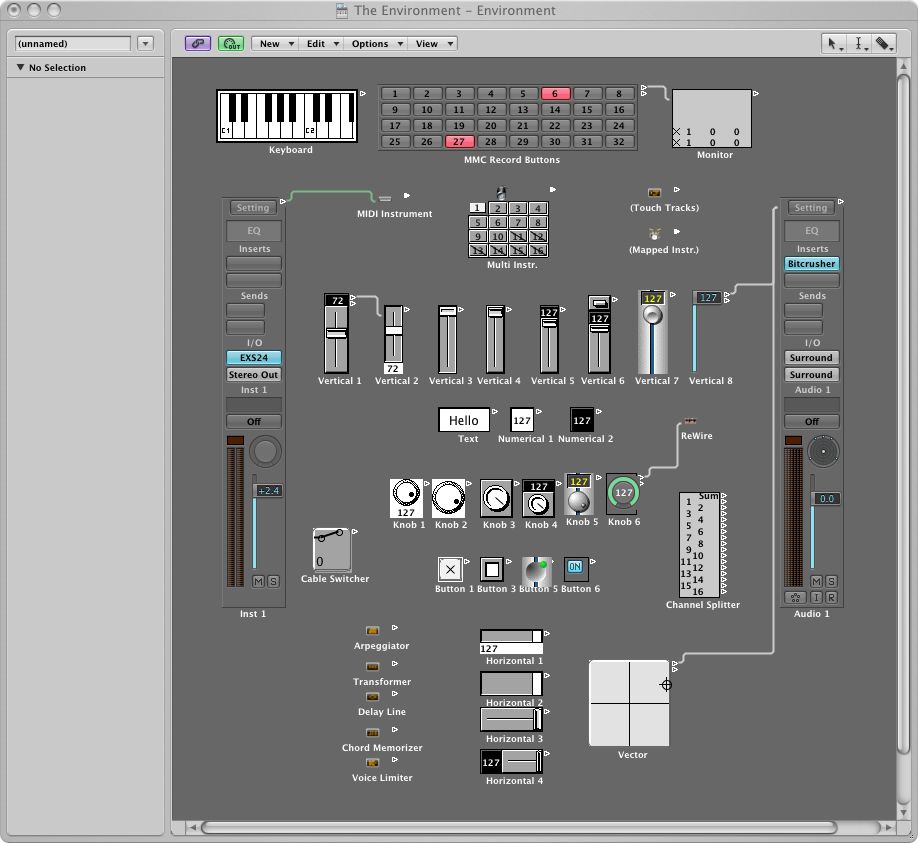 When you open an environment window, you'll be viewing only a limited number of the objects it actually contains. The reason for the restricted view is because of an environment window feature called “layers”. While I love this feature, this term “layers” doesn't really fit with the function it provides. They're certainly not like Photoshop layers. A better choice of word would be “partition” or “cubicle” or “room”. Here's why…

The environment is like an open floor plan space, and any object can live anywhere in that space. But when we're dealing with so many different kinds of objects created at random times over the course of a production, having them all appear in a single environment window would make for a disorganized, confusing mess. Environment “layers” let us separate similar objects into aptly-named partitions or cubicles within that space. This helps keep objects compartmentalized according to their function.

Every Logic project contains several default (pre-existing) layers as seen below. Let's explore what kinds of objects each one displays.

By default, audio channels, instruments, auxes, outputs, the pre-listen channel and the click channel appear in this layer. And Logic's programming is such that when you create any new audio object (audio channel, instrument, aux, or output) it is automatically placed in the Mixer layer. This behavior makes perfect sense and keeps things organized.

The Mixer Layer of the Environment.

It's no coincidence that the Mixer layer's appearance has a very strong resemblance to that of the Mixer window. We'll explore the relationship between them shortly.

This is where Logic's essential MIDI objects appear by default. MIDI processing objects such as arpeggiators and chord memorizers typically find a home here. We'll examine the purpose of the objects found in this layer in an upcoming article in this series.

The default objects found in the Clicks & Ports layer.

A simple bit of environment programming in Clicks & Ports that provides easy switching between an arpeggiator and a chord memorizer.

Representations of external MIDI objects appear in this layer by default.

Moving an object into this layer makes it visible in all layers. Cool feature! Imagine being able to see your Stereo Output or Klopfgeist in every layer! The downside: wherever you position an object in this layer will cause it to appear in that same place in other layers, likely causing graphic overlaps in the other layers and creating a mess. Still, might be worth experimenting with.

• The All Objects Layer

This layer shows all environment objects in a single layer as a text list by default. Disabling the text view results in a jumbled mess of overlapping objects and is really only useful for its comedic value. 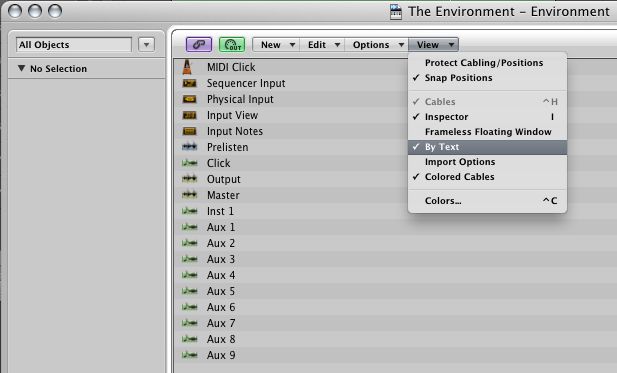 The All Objects layer.

The Relationship of the Mixer Window to the Environment Mixer Layer

Repeated from above, the Mixer layer of the Environment. 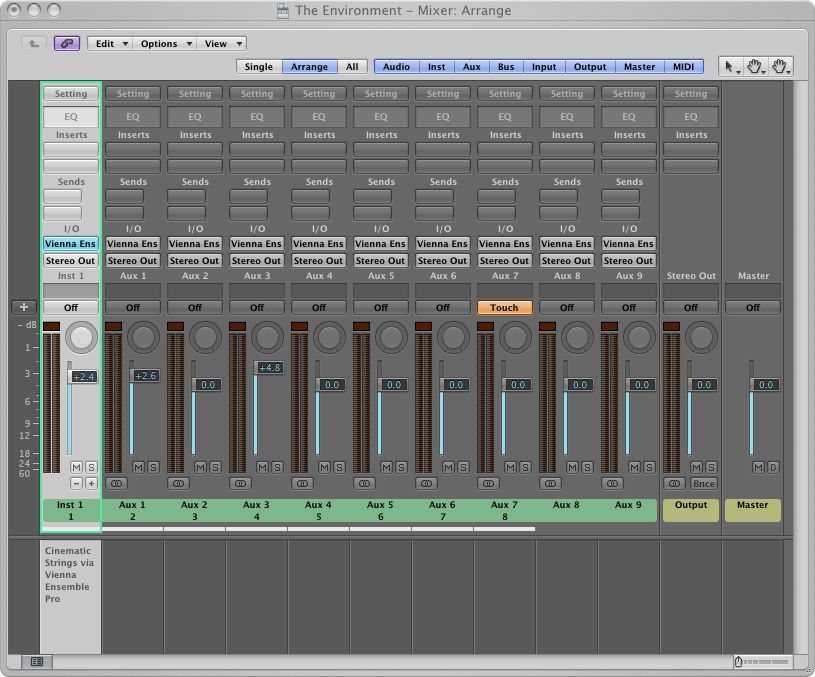 The Mixer Window. The channel strips shown are the same ones seen in the environment window above. The only ones that doesn't appear here are the Prelisten channel and the Click, because the Mixer window is set to display only items assigned to tracks in the Arrangement.

As a side note, the channel strips you see in the Inspector in the Arrange page are the same ones that live in the environment too.

For the most part, the Mixer is limited to displaying channel strips for audio-related channel strips and MIDI instruments, and to the extent that we're mixing and engineering tracks that's fine. Additionally, the Mixer window has a few features not available in the environment, such as track notes. But there are still plenty of reasons to view the mixer in the environment instead. Read on!

One of the main complaints about the Mixer window is that you can't re-order channel strips, and there are times when this is highly desirable. For example, your arrangement (from top to bottom) has 8 tracks of drums, followed by a few tracks of synths, and then a few tracks of percussion. To make it easier to balance all of the drumming elements, it would be nice to move the percussion channels closer to the drum channels. Well, that's just not possible in the Mixer window. 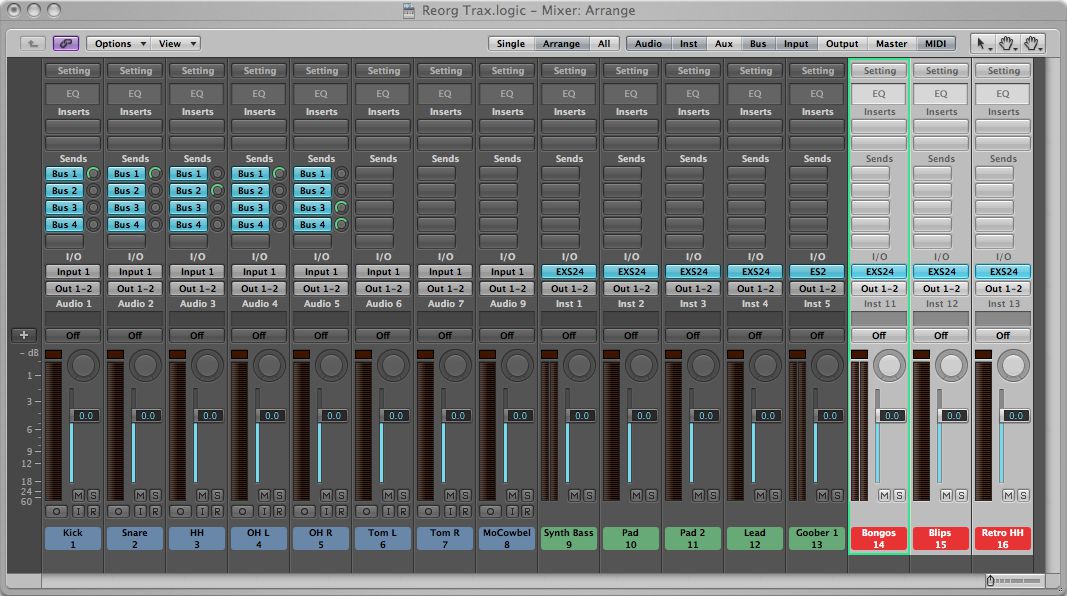 But in the environment, you can rearrange your audio channels however you like. Now, the changes you make by moving the furniture around won't be visible in the Mixer window, but in this situation you'd view the environment window instead of the Mixer. 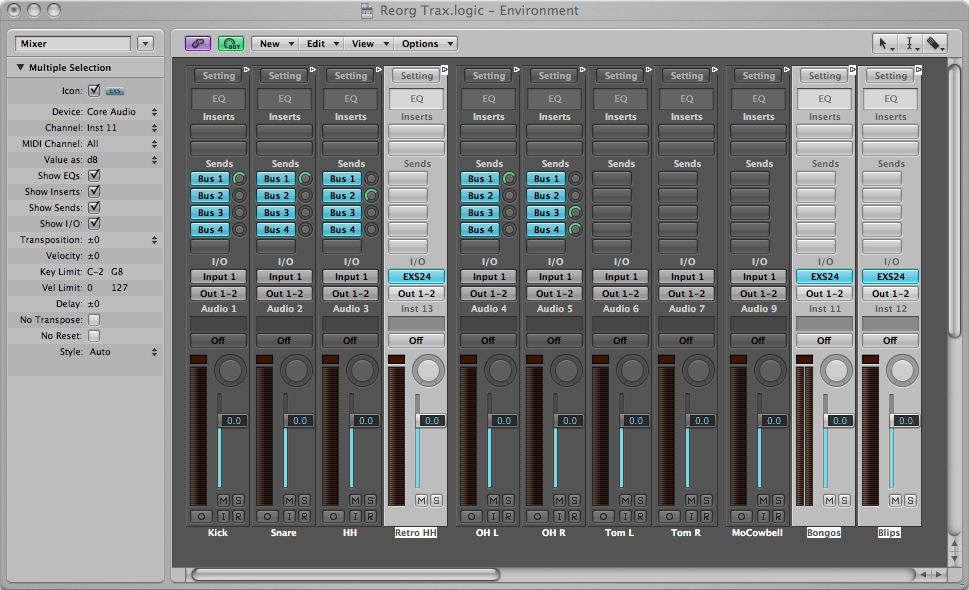 The Mixer Layer, showing drum and percussion channels adjacent. As above, percussion tracks are highlighted. 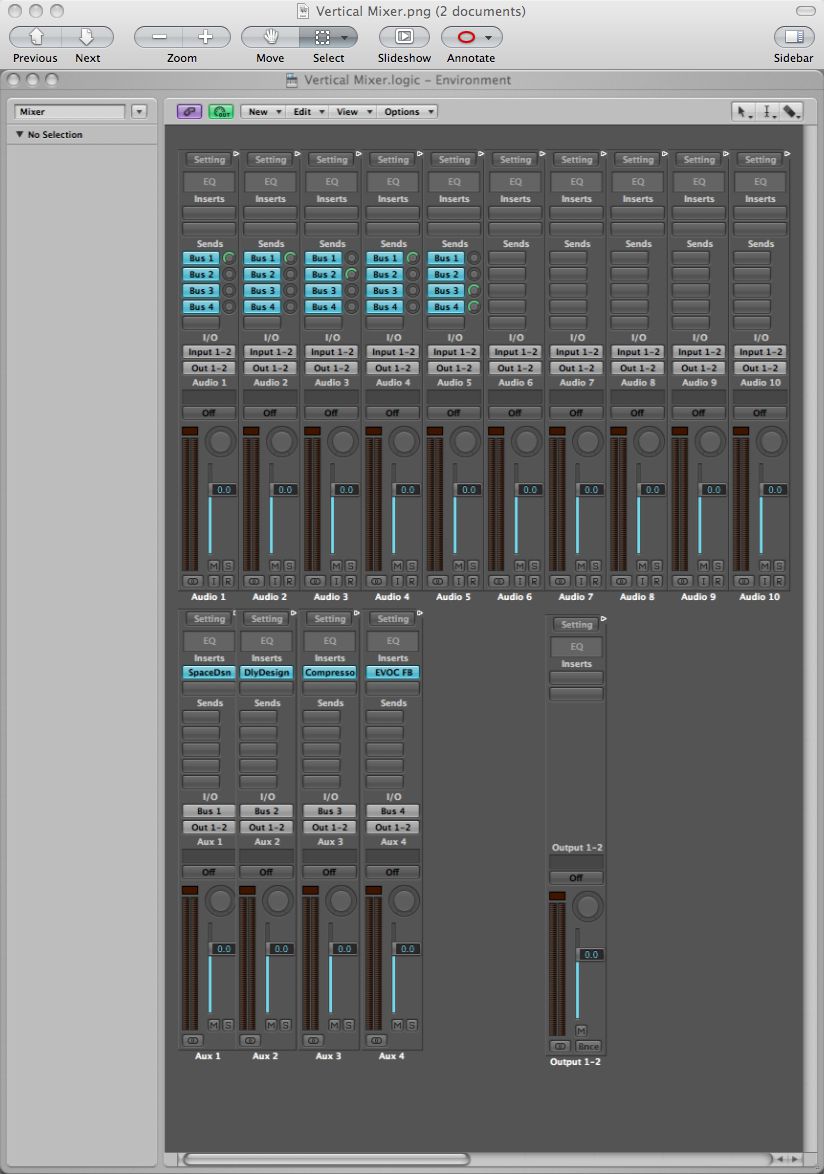 A useful vertical arrangement of mixer channel strips, only possible via the environment.

By design, layers restrict the number of objects we can see at any given time (the exception being the not-terribly-useful All Objects layer). So when the need arises to view multiple layers at once, all you have to do is open multiple environment windows and select the appropriate layer in each one. Here's an example of how this can be useful…

Organizing Objects In Your Own Custom Layers

When working with multi-timbral, multi-output instruments, it's common to create a bevy of auxes to handle the instrument's various outputs. All of these objects will, as we now know, appear in the Mixer layer by default. To conveniently access all these associated channel strips, you might want to consider creating a new layer and moving just those items into it. This keeps them visually isolated from all other channel strips and other environment objects, as shown below. Here, I created a new layer, named it “Cinematic Strings Audition”, and moved the instrument channel and its 9 associated auxes to that layer. 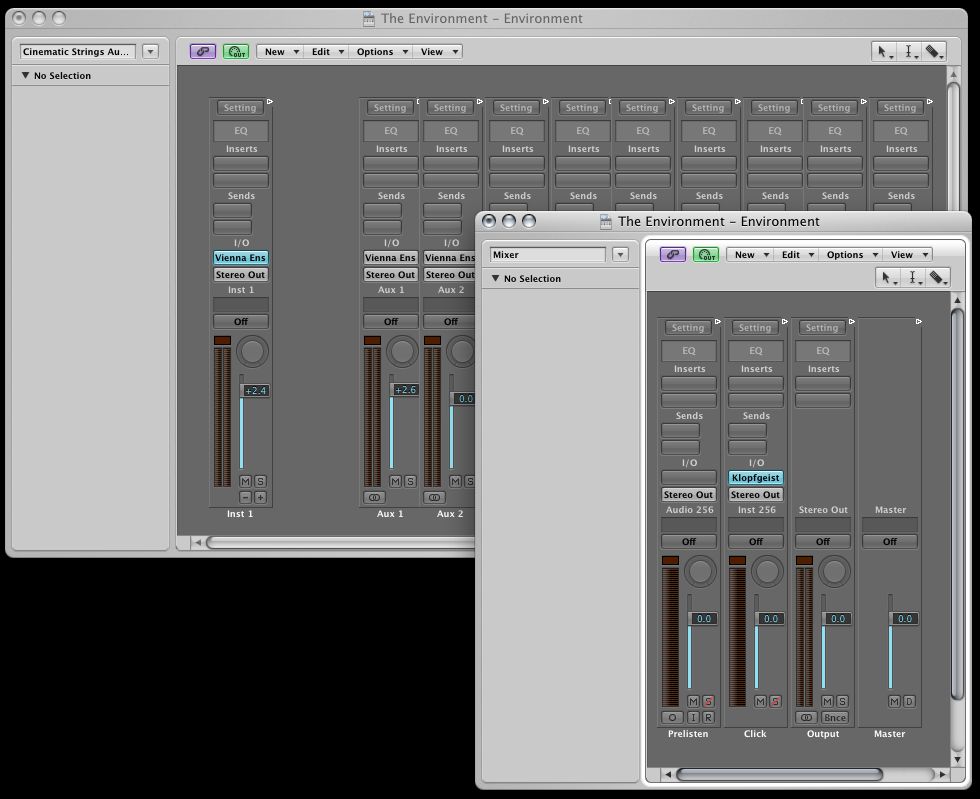 Dave DeLizza
I've quickly read the headings of this article, and I can already tell it's awesome. Can't wait to read this later, thanks for this. I'm somewhere in between with the environment. Not scared of it at all, but just lack some of the "why would I use this" sense.
Peter Schwartz
Thanks for your comments, Dave. As you may have read already, a basic but highly useful reason for delving into the environment is to create custom mixer channel layouts, and to be able to organize channel strips (and whatever else you might want) in the mixer layer or in their own layers. This capability alone is really useful, particularly so in large projects with tons of audio and channels, auxes, etc. And no "environment programming" or MIDI knowledge is required to do that.

In follow-up articles I'll be explaining the MIDI side of the environment, which lets you exercise great control over MIDI data. But even if you never needed to do such things as convert CC#7 to CC#11, or convert the pitch bender into a pan control, you can use MIDI notes, CC's, etc. to control audio objects, bypass plugins, A/B mixes, and much more. So stay tuned! :)

Magic Fingers
Great start... Thank you for tackling the Logic Environment. This series of articles may leave me with a decision to make on using Logic instead of Mainstage for certain Live Performance needs.
I normally use the arrange tab option in the mixer window... which works well, if I've already grouped my instruments together in the arrange window. I'll be interested to see where this series of T&T goes from here, and hopefully opens my eyes up to some new options, and ways of utilizing my current workflow.
Thanks!

BPGeez
This is Fn amazing man! I've been looking for tutorials like this.. Would be cool if you can make a video about the Environment (strictly the Environment) and add it to the catalog.. Keep it up!!