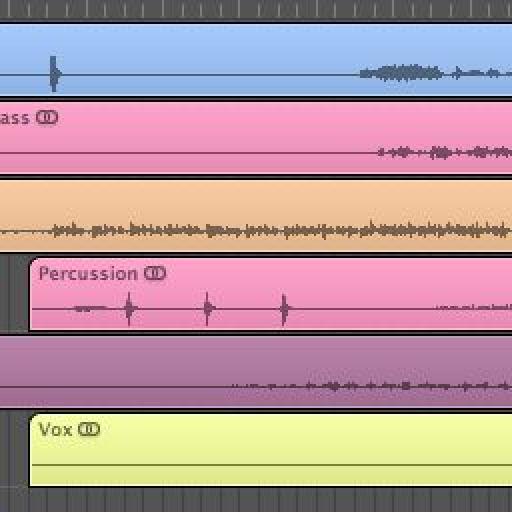 I am frequently called upon to help composers learning to use Logic Pro either in migration from another DAW or in conjunction with another DAW. As we, long time Logic Pro users who have experience with another DAW well know, it is idiosyncratic and marches to the beat of its own drummer.

One of the confusing things about Logic Pro compared to other DAWs is quite simply the names Logic Pro uses for certain tasks and preferences that are unique to it. I attribute some of this to the fact that the developers are Germans and translation from German to English can be challenging, as there are connotations as well as the actual definitions. That said, some of the naming is just odd and even long time Logic Pro users may not be aware of what is actually the purpose of these.

So let's explore a few.

In Pic 1, I have opened the Audio Preferences and navigated to the General Tab. In the Track Mute/Solo rectangle, you see CPU-saving (Slow Response) but that is not the default. The default, which you see as a choice in Pic 2 is Fast (Remote Channel Strips). 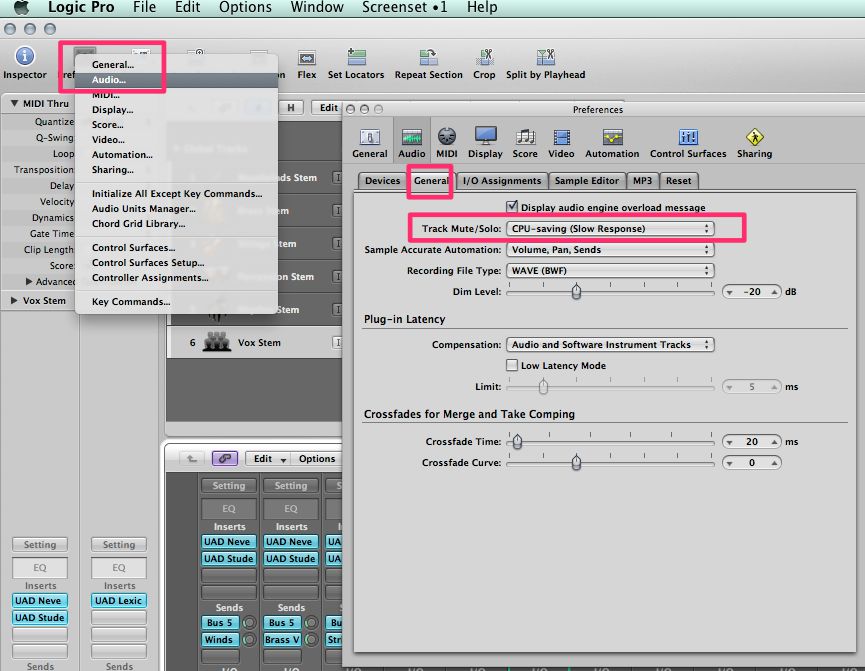 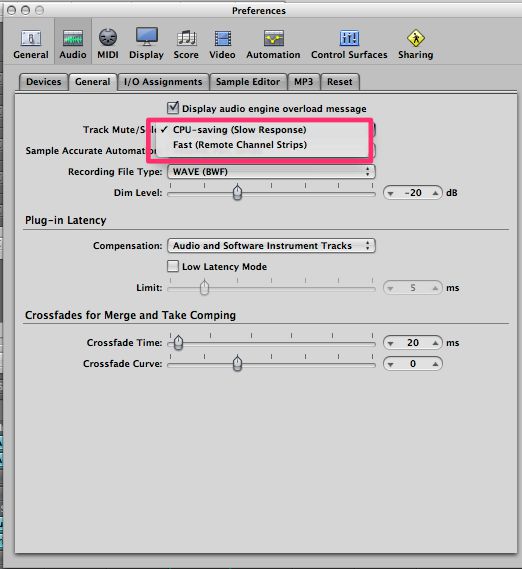 Faster is better, right? Of course, you want that. So why have I chosen the other preference? Because we may have multiple tracks that flow through the same Channel Strip and with the default Fast setting, the reason it is “fast” is because it solos or mutes the Channel Strip itself without having to take time to sort out the tracks. This means you cannot solo/mute the specific track discretely in the Arrange window's Track List. (You can in the Mixer.)

If I choose CPU-saving then I have the ability to do so, but because Logic has to figure out which track to solo/mute that is flowing through the Channel Strip and it takes a teensy amount of time to do so. But before the Fast option was implemented, some users found that annoying so the developers gave them a choice.

So as you can see, the preference has implications beyond what the name might lead you to believe.

In Pic 3, notice that I have opened my Project Setting and navigated to the Audio tab. I have Automatic Management of Channel Strip Objects checked. What exactly is that managing? 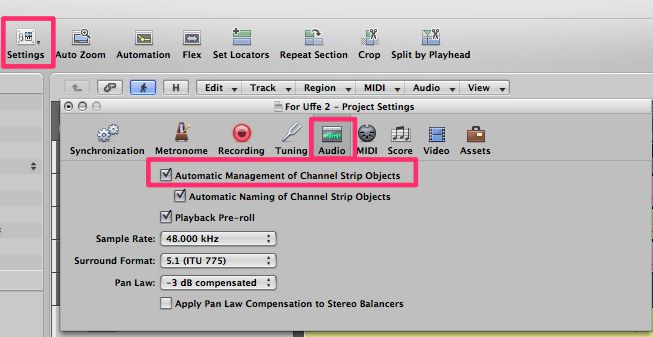 Choice is good. If Automatic Management of Channel Strip Objects is checked, deleting a track form the Track List also deletes the Channel Strip from the Environment. If unchecked, it does not. Again, the name does not tell the whole story.

This project setting that you see in Pic 4 almost tells you what it is for. 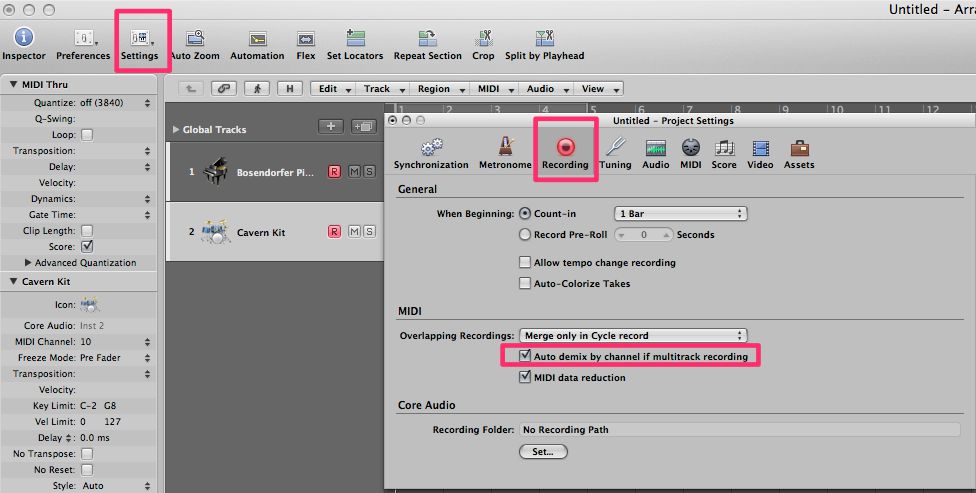 If you do not have "Auto demix by channel if multitrack recording" checked, when he hits a V-Drum pad that is assigned to i.e. the kick (C1) he will now hear the kick and the low notes on the piano and the same will happen when you play C1 on your keyboard. With it checked, you can now transmit the MIDI discretely. When you go to record, it will appear to be only recording one region on one track but when you stop, there will be the two regions ”auto demixed.”

In the key commands, there are a number of items where the name does not tell you what you need to know about its functionality. In Pic 5, you see a number of regions timed to different entry points, but none of them at the top of the project at bar 1. I want to move the Synth & Harp region to bar 1 and have the others move as well, keeping the same spatial relationship.

Should be a simple task for any DAW, right? I press Command-A to select them all as in Pic 6 under the Regions menu, I would expect to see something like “Move Selected Regions to Playhead Position” or such. 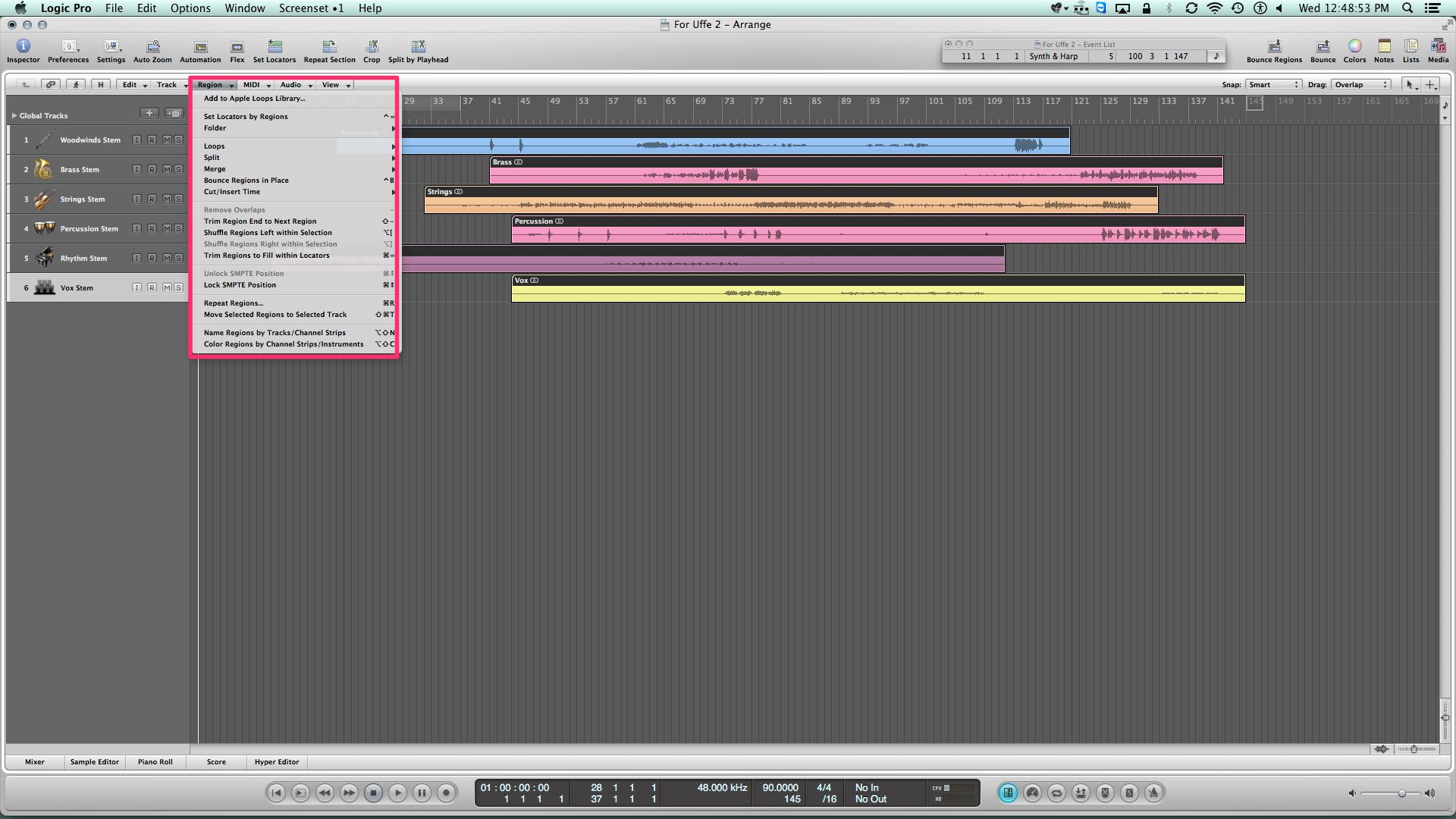 Nope, no such beast, must be a key command thing. I press Option-K to open my key commands window and in the search field I type in move regions.  See Pic 7. 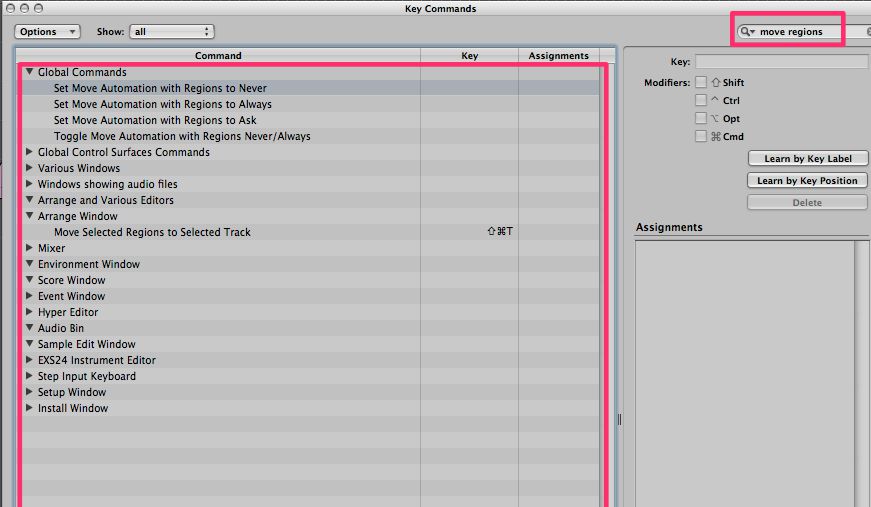 Once again, naming conventions are the issue. (What did you expect from an app that still calls its metronome instrument the Klopfgeist?)

In Logic Pro, the key command that allows us to perform this task is called Pickup Clock and on a Mac keyboard with a numerical keyboard section, it defaults to the Comma.

With all the regions still selected and the playhead at bar 1, I press the Comma key and as you see in Pic 9, I have achieved what I wanted with 1 quick key command. Easy as you long as you know what they named the f%^&$* thing.

Let's give credit where credit is due, however. Over the years, sometimes they have changed the name for the better, although obviously this can be confusing to long time users.

In Pic. 10, you can see I have made some Advanced Quantize Settings to this region that I wish to make part of the MIDI. 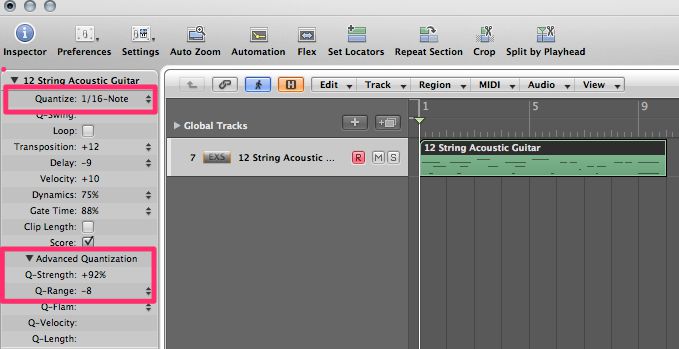 This used to be achieved with a key command called Fix Quantize but it has been changed. As you see in Pic. 11, I have typed in “quantize” in the search field, and it does not appear. Neither does anything else seemingly which achieves this! Really????? 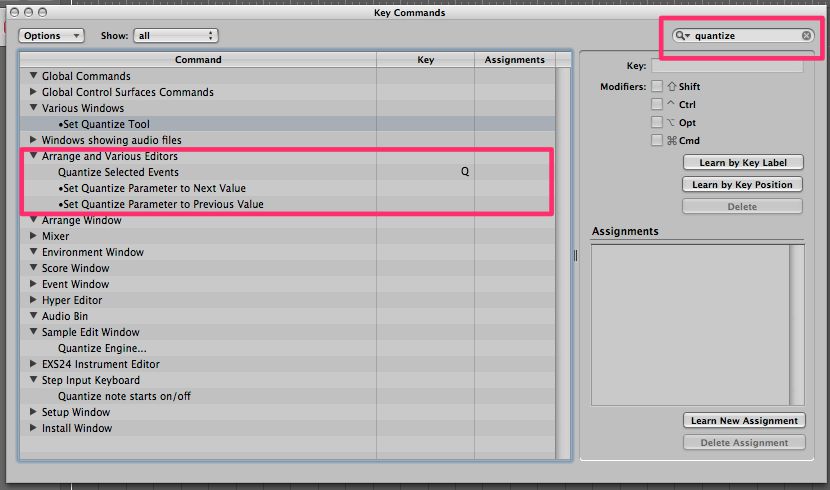 (sigh) They have re-named it Apply Quantization Destructively. On a Mac keyboard with a numerical keyboard section, it defaults to Control-Q. See Pic 12. 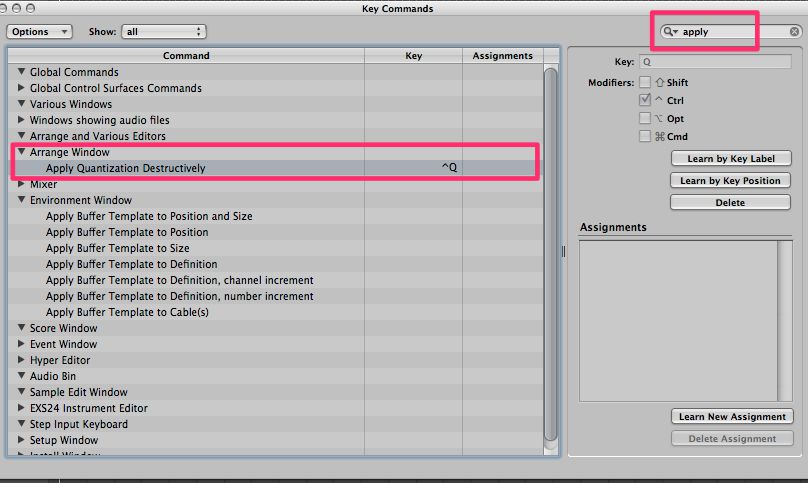 Dear readers, please let us know if you would like a sequel to this with more of Logic Pro's err…. creatively named….functions and settings.

Any info on Logic is always welcome.

Mojave
Do you know if Logic will be further developed with new versions or did they decide to call it at 9?
Reeltime
Great explanations and would love to hear more
Jay Asher
Yes, Mojave, Logic is continuing to be developed, largely by the same core group of Germans who have always developed it. Ignore the clueless internet chatter of "I know a guy who is inside Apple and says Logic is dead" etc.
Mojave
AWSOME, honestly, I read that it was shelved on a credible news letter. I'm level II certified but I'm glad it wasn't for Not. I loved your article BTW . Thanks much
Chris
More! These are great
Jay Asher
Mojave, take that news letter off your"credible"list:)
Mojave
It's Bobby Owsinski, not exactly rumor mongrel but appreciate you insight
Jay Asher
Well then, a guy like Bobby should know better than to talk out of his butt. You can tell him I said so.
Mojave
No go ahead, be my guest
Tieg
Keep em coming! Loved this.
Magic Fingers
Thanks for sharing those tidbits with us. These types of articles continue to strengthen my allegiance to, and build my confidence in Logic Pro. More sequels please!!!
jamr
Thank you very much for this.
jjr007
This is awesome. I'm pretty Logic savvy but I've always wondered about these little things. I would live to see more if this.
lostinthesound
To the above posters who've inquired about Logic X, it has been confirmed many times (specifically by Xander Soren) that the team is still hard at work on the next version. It has not been dismantled or shelved, so please avoid believing rumors from silly blog sites that have no connections.

As far as this article goes, BRAVO! As a long time Pro user I love seeing these little tidbits of info and insight that are either hidden deep (or missing) from Logic's manual. To add, your zing about Klopgeist made me laugh quite hard. :-) Cheers.