Language
If you think Korg's volca bass is just, well, a bass... you'd be mistaken. It's a 3-synth-in-one beast and enables you to program three sub-patterns. G.W. Childs shows you how in this tutorial.

Many are surprised to discover that volca bass, in fact, technically houses three synthesizers, and that each of these synths can be programmed independently with their own melodic/rhythmic patterns. In this tutorial, I’d like to go over not only the ability to create three sub-patterns in one, but also some handy strategies which might come in handy with your live, freestyle, or studio needs.

In the Voltage Controlled Oscillator section, you’ll notice 3 pitch knobs, and 3 buttons, labeled Mute. These buttons hold more significance than mere mute-ation. Depending on the mode group mode you are working in, you may also use these buttons for the particular VCO selection you’d like to work from, and program independently from the others.

We can hold FUNC and tap step button 1, which will place volca bass in the first group mode where none of the VCOs are linked, whatsoever. It is in this mode where we’ll have the height of our ability to spread volca bass over three different ‘sub’ patterns, simultaneously, within one memory location. 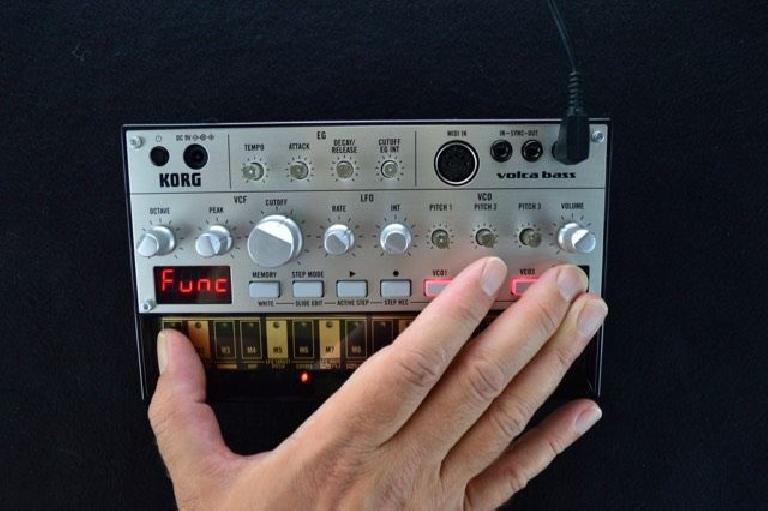 Of course, there will be times where you want volca bass to sound huge, and that’s when you link all three of your oscillators. Or, just link 2 oscillators, and use two oscillators as a lead, as two slightly detuned oscillators sound thick enough, and the last oscillator as a bass. Whichever way you go, don’t forget that you can change the waveform of each oscillator from Sawtooth to Square!

Now that we’ve unlinked all of volca bass’s oscillators, we can begin creating individual patterns. I’ll go ahead and clear this pattern before I do anything, as I don’t want to have to build over my previous work, by holding FUNC and pressing the very last step button, number 16, which is labeled Clear. This frees up the whole pattern, and gives me some room to work. 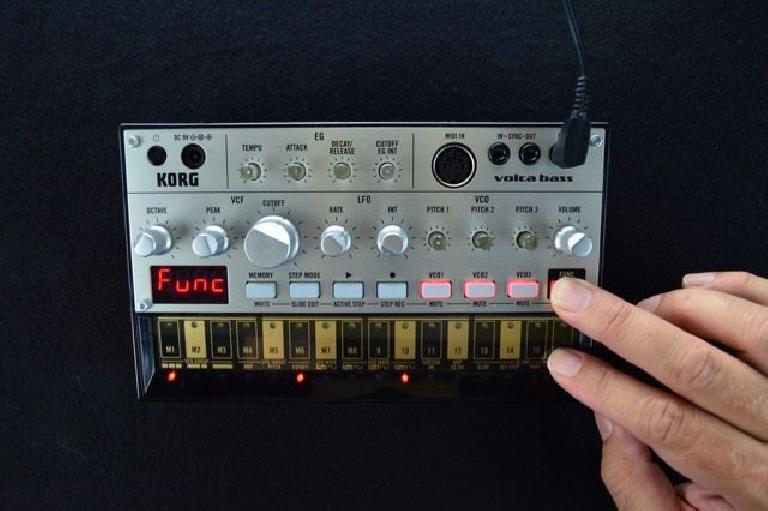 Now, I’ll press the VCO 1 button, to select the first oscillator. By doing this, we’re also selecting the first sub-pattern location that we’ll be programming. 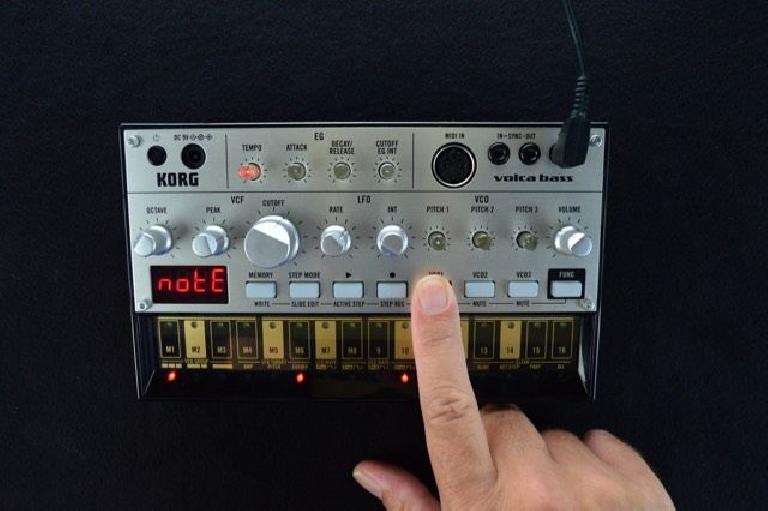 Now, when I press the Record button, the light within the small plastic button will start flashing, letting me know that as soon as I press a key, volca bass is going to start recording. Let’s not keep it waiting! 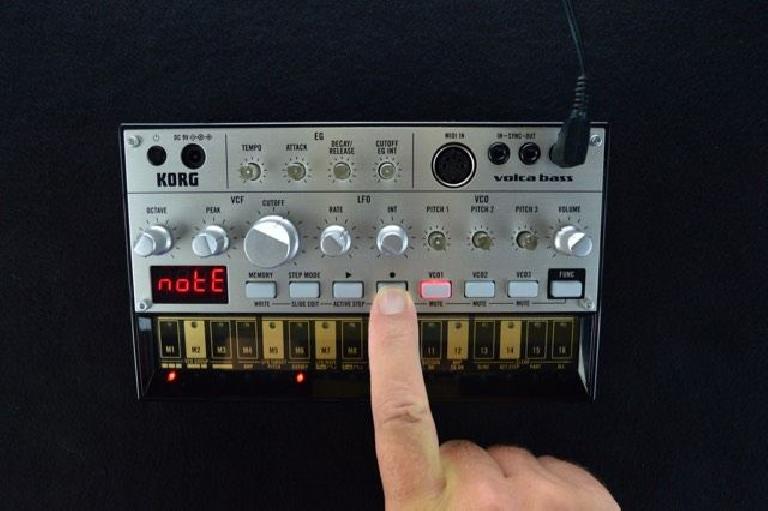 I’ll press a step button, and suddenly the lights begin a-strobing. Now, I’ll simply drop in steps in real time. I tend to like to use first and second VCO sub-patterns more for less intricate, stab type parts, and use the last oscillator for more true bass sound design and programming. The reason: If I happen to switch to VCO Group 2, I’ll still have my bass part, coming from VCO 3, running separately, while the first two VCOs fight it out. This just lets me keep some uniformity throughout those kinds of shifts. 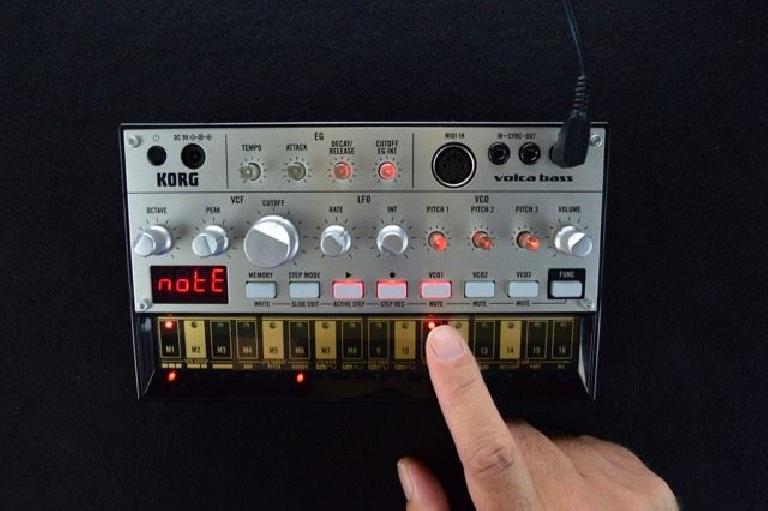 Once VCO 1 pattern is finished, I’ll press the VCO 2 button. This can create some perplexing looks, at first, because it looks like you don’t have any steps selected in your pattern anymore. But, you’re merely on to the next. In order to make this pattern a little more identifiable, let’s change its waveform from the default sawtooth, to a square wave by holding down the FUNC button, and pressing step button 9. This assist in making it a little easier to tell the VCO 1 pattern from VCO 2. And, I can also raise up the pitch of VCO 2, all the way. Now, I can really hear a difference between my two patterns. 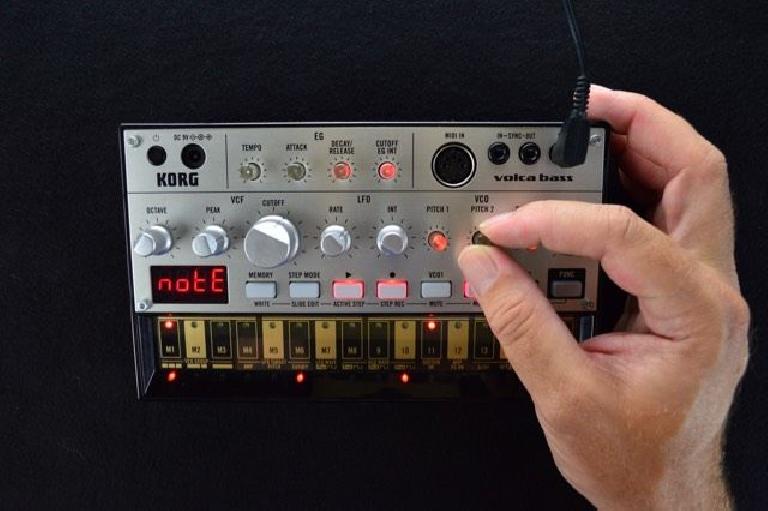 Don’t forget to use the octave knob when programming in patterns. Regardless of the pitch set to VCOs, using the knobs, you can have parts playing in several different octaves, simply by turning the knob up and down, as you record and play. 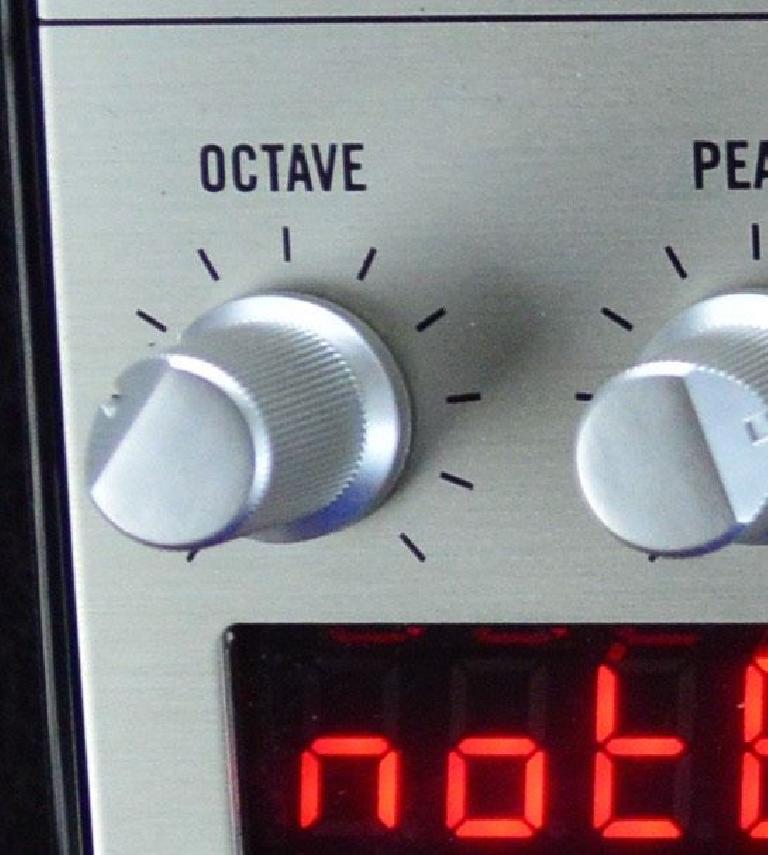 Alright, we’ve got two distinct patterns running together. Now, let’s create a third pattern. Like I mentioned above, I like to keep the third VCO pattern reserved for true bass lines. I’ll go ahead and press VCO 3’s button, and lower its pitch all the way down. Again, I’ll switch the waveform of Oscillator 3 to a square wave by holding down the FUNC button and pressing step button 10. Between the square and the sawtooth, I tend to get some beefier low-end, and the square tends to be a little more clear in the lower octaves. 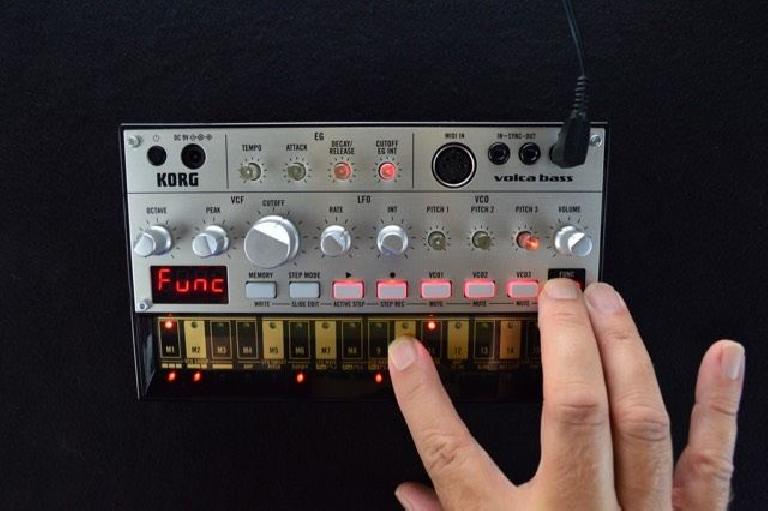 I’ll also start tweaking the Cutoff and Resonance of the filter at this point, as they can play a major factor in how all this sounds, along with the EG settings. Once I get the sound I like, I’ll proceed on to Slides!

This is where I really marvel at the engineering that went into volca bass. Once you enter in to Slide Edit mode, by holding the FUNC button and pressing the Step Mode button, you are allowed to use the step buttons as markers of slide points between pattern steps. 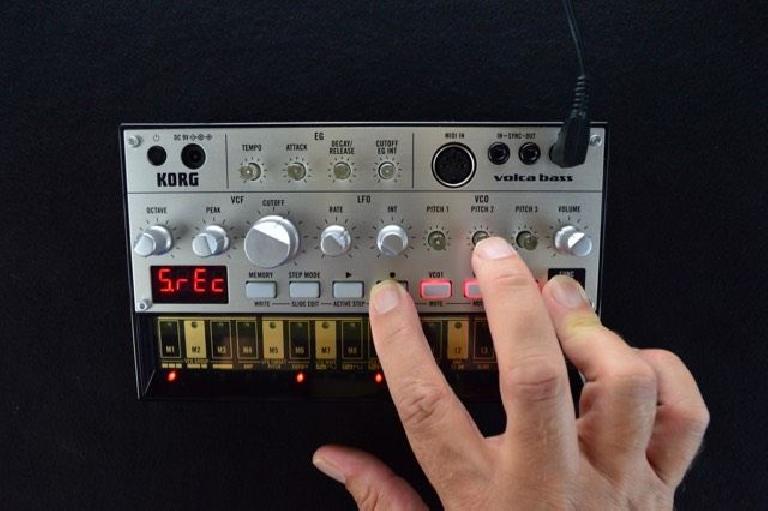 Thus, sustained notes can move up and down rapidly, in exact programmed locations within patterns, in pitch. This replicates the classic Roland TB-303 slide, so prominent in House, Techno, Trance and many other forms of electronic music.

By switching between VCOs, now, using the VCO buttons 1-3, you can also program individual slide patterns for each individual sub-pattern, within your one main pattern of volca bass. And, as an added bonus, you can use those VCO selection buttons as mutes, when you hold the FUNC button to select one. By selectively muting sub-patterns, it’s easy to create cool breakdowns, only to build back up, again, later. 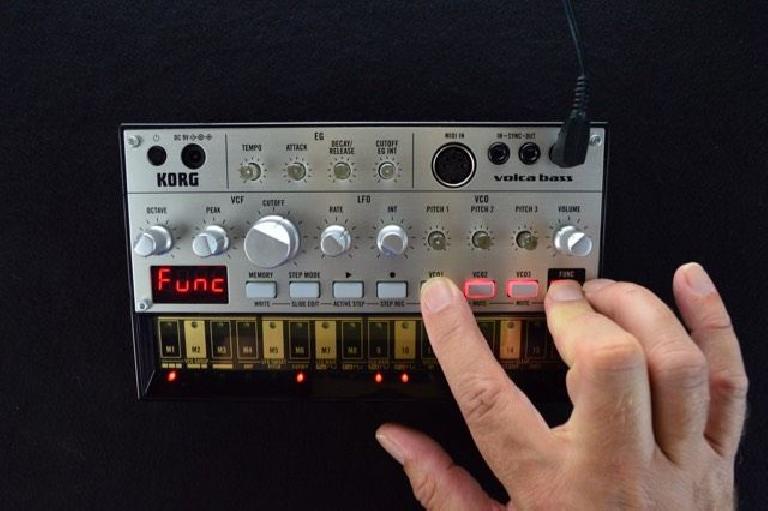 Oh, and if one of your oscillator patterns isn’t really doing it for you, don’t worry! You don’t have to clear everything you’ve done. You can actually clear individual VCO pattens, too. Simply hold the FUNC button, while you’re on the VCO you want to alter the pattern for, and tap step button 15. 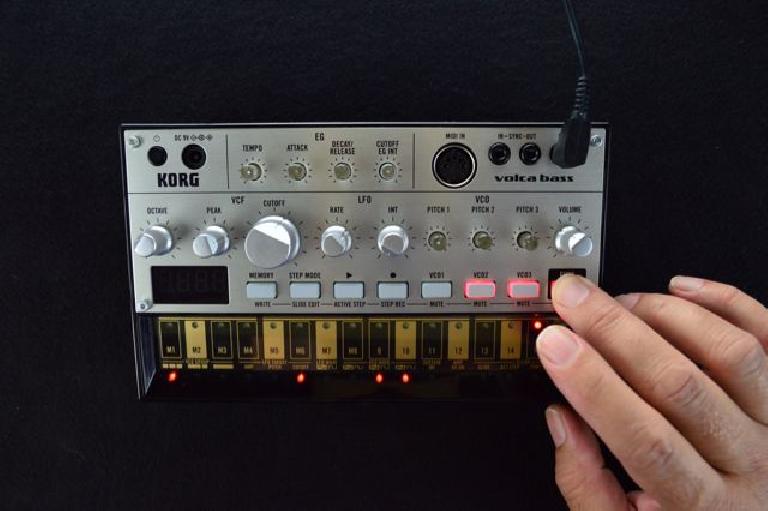 Now, the VCO you’re currently working in is clear, and you can build up around you other, currently existing sub-patterns, or parts. Cool stuff, Korg!

Watch this video from the volca bass Explored course to learn more about the very flexible Voltage Controller Oscillator section: