Keith McMillen Instruments are well known for their unique MIDI and keyboard controllers. The K-Board 4 promises to continue that forward-looking tradition of controllers while adding extremely flexible control with multidimensional polyphonic expression support. It's already over 58% funded on Kickstarter with 33 days remaining!

“The K-Board Pro 4 is really musical because it’s the only MPE controller that you can just play like a keyboard that has a definite attack but also has all of the continuous dimensions.”

BERKELEY, CA, USA: innovative hardware and software developer Keith McMillen Instruments is inviting capital investment for its innovative K-Board Pro 4 — a four-octave MIDI (Musical Instrument Digital Interface) keyboard controller that is MPE (Multidimensional Polyphonic Expression) compatible with multiple dimensions of touch sensitivity in each key, and a duly desirable device which will be the next product to come out of KMI Labs (https://www.keithmcmillen.com/labs/), the R&D (Research and Development) division of Keith McMillen Instruments, further forging the appeal of the cutting-edge company — courtesy of a Kickstarter campaign kicking off as of November 16...

K-Board Pro 4 is a new kind of keyboard controller that feels and responds like a musical instrument — with all the nuance and sensitivity that makes an instrument musical. Marketing-speak notwithstanding, who better, then, to put the cutting-edge, MPE-compatible K-Board Pro 4’s raison d'être into even wiser words than Keith McMillen Instruments’ namesake Founder & CEO Keith McMillen, an acclaimed audio and music technology innovator of some 30 years standing? Says the man himself: “We wanted to reclaim all of the powerful synth parameters that you can rarely access in performance and put them under your fingertips where you can play the heck out of them! Start with the familiarity of the classic keyboard and make it more responsive to take advantage of multidimensional expressivity.”

Enter K-Board Pro 4... thanks to its familiar keyboard layout, players can seamlessly transition from a traditional piano performance to a brave new MPE world — without changing their natural technique, but with the added ability to take total control over the character of their sound while playing. More meaningfully, MPE is the new standard for advanced expressive instruments. It’s a new way for electronic music controllers like K-Board Pro 4 to communicate with favourite hardware classics and cutting-edge soft synths. ‘Speaking’ MPE is becoming more commonplace amongst more modern synthesizers, so realtime plug-and-play access to control over sounds is perfectly possible — in the right hands. However, in-demand, innovative instruments from the likes of ROLI (Seaboard) and Roger Linn (Linnstrument) use MPE to allow for the type of expressive control that previous-generation controllers could only deliver with complicated mappings and middleware.

Moving MPE onwards and upwards, under each key of K-Board Pro 4 is Keith McMillen Instruments’ patented Smart Sensor Fabric technology that is at the core of all of the company’s cutting-edge MIDI control surfaces, making it immediately playable while providing an expanded range of possible expression. Each key independently outputs touch-sensitive XYZ data that can be mapped to any parameter, such as vibrato, brightness, or timbre, allowing users to play expressively in realtime with the nuance more routinely expected from an acoustic instrument. Furthermore, four touch-sensitive sliders can be mapped to anything, providing rapid access to parameters such as octave, vibrato depth, or preset to keep performers playing without interrupting their creative flow.

Future-proofing music performance, K-Board Pro 4’s silicone keys’ resilience, durable aluminium frame construction, and no moving parts partnership ensures that trademark durability for which Keith McMillen Instruments is held in such high regard worldwide, while the truly desirable device itself is USB (Universal Serial Bus) powered and class compliant to ensure both portability and compatibility with Mac OS, Windows, iOS, and Android, as well as MIDI-capable hardware. 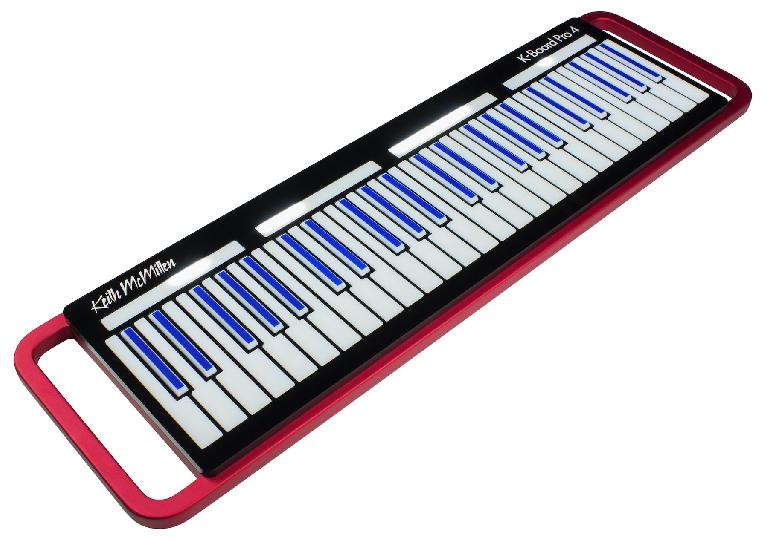 Having already put highly-functional prototypes in the hands of professional keyboard players and received an abundance of feedback that has helped Keith McMillen Instruments dial in the final design, quite how long supportive purchasers might have to wait to get their eager hands on a production model is dependent on the outcome of this Kickstarter campaign, though if all goes to plan — scaling up working prototype units to full production, paying for tooling, materials, and assembly in large quantities — then estimated delivery is September 2017. Keith McMillen himself is highly confident, concluding, “Our recent campaign for the BopPad Smart Fabric Drum was a huge success because of the support of the Kickstarter community. There really is no better place for a small company to launch a new idea than on this platform.”