iZotope RX is the industry-standard audio repair tool to restore damaged, noisy audio into a more pristine state. Joe Albano discovers the joys of version 8 in our in-depth review.

iZotope has released the latest version of RX, their premier audio repair suite. RX 8 adds a number of welcome new processors to the already jam-packed collection of audio repair and processing modules, and also brings significant improvements to some of the existing tools.

RX 8 incorporates both a standalone application and a large collection of the included processing modules in plug-in form, for all the usual plug-in formats. The RX Connect and RX Monitor plug-ins provide easy integration between the DAW and the standalone, for working with some of the more complex tools that can’t be implemented as plug-ins. As with previous releases, RX 8 is available in three versions: RX 8 Advanced is the top of the line, including all the available modules; RX 8 Standard brings a subset of those modules, including most of the main tools RX is known for; and for the budget-conscious, RX Elements provides a smaller subset of processors and utilities, for basic audio repair needs. 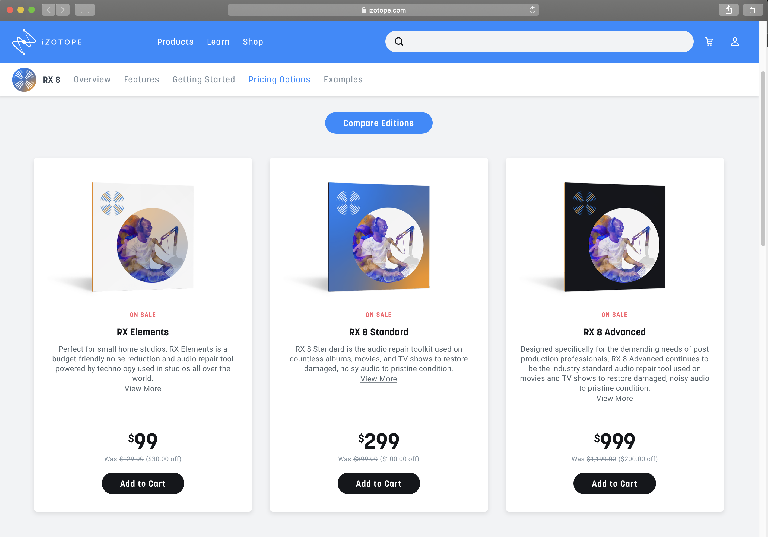 The Loudness module has been replaced by Loudness Control, with additional displays. The existing De-hum module can now remove higher hum harmonics. And the Music Rebalance module has been reworked under the hood, improving its ability to isolate and rebalance certain elements in a full mix.

Let’s take a brief look at each of these..

With the increased use of applications like Zoom and Skype—among many others—there’s a lot of somewhat-compromised audio floating around. While the voice quality for these VoIP applications is usually acceptable, it’s often somewhat band-limited, with small glitches here and there. The new Spectral Recovery module synthesizes the missing harmonics/overtones, restoring a little subtle clarity and air, and also tries to repair any small glitches in the audio as well. 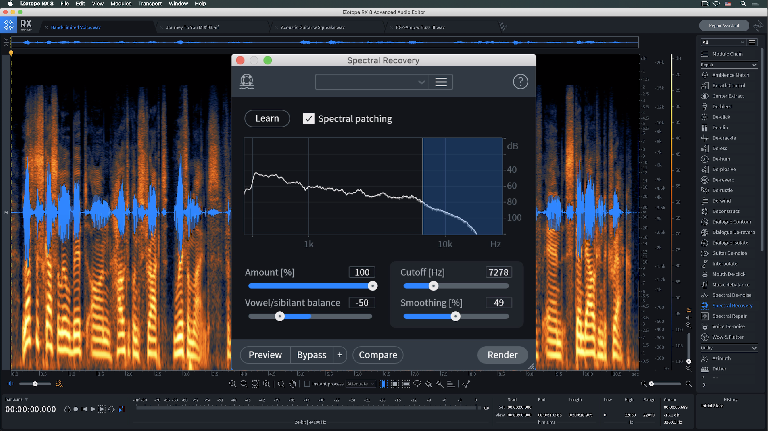 As with many of RX’s processors, Spectral Recovery analyzes the audio signal via a Learn button, and uses that analysis to determine what high-frequency content to add. You can customize the results with controls for the strength of the added frequency content and glitch repair, and a balance control that can emphasize or de-emphasize sibilants (for clarity) versus vowels (for tone). With most of the audio I tried it with—decent-quality voice communications—the result was a subtle but definitely noticeable improvement in clarity and smoothness, making Spectral Recovery a useful tool for archiving recordings from online meetings.

Guitar De-noise takes on three common issues in acoustic and electric guitar recordings. Electric guitar recordings sometimes suffer from noticeable hum or buzz from a miked-up amp—a result of ground loops or dirty power connections onstage—or from single-coil pickups too close to an electrical source that induces a magnetic field. Electric or acoustic guitar recordings often include squeaks from the player’s hand sliding up & down the fretboard—these can be accentuated when compression is applied. And occasionally the pick noise might be a little too prominent, sticking out to an unwanted degree. The three sections in Guitar De-noise address each of these common issues. 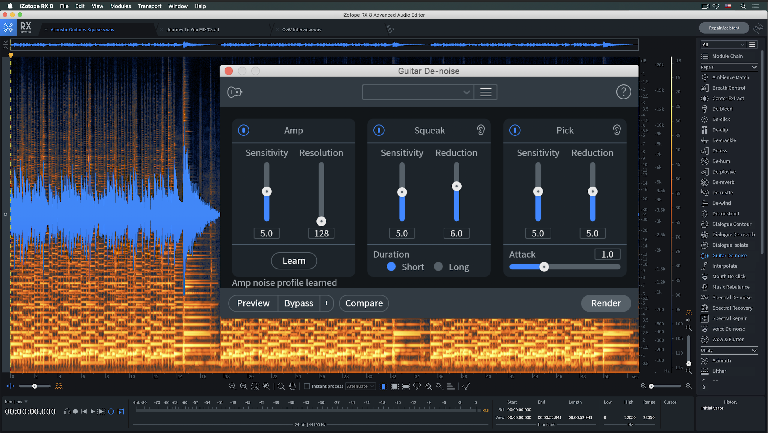 All three sections have the same controls: Sensitivity and Reduction (or Resolution, in the Amp section). The Amp section needs to Learn the sound of the unwanted hum/buzz from a short segment of the recording where it’s isolated. It can then apply the inverse of that to remove the buzz from under the guitar. Sensitivity sets how much of the Learned buzz will be removed, and Resolution can be increased for significantly brighter buzz. The Amp section is designed to work with steady hum/buzz in a recording, and it worked well on the tracks I tried it with.

The Squeak section has a more difficult task, since guitar squeaks can be harder to isolate. I found that the best results here are achieved when you treat the squeaks like excessive breath noises in a vocal recording—they’re a natural part of the performance, so rather than try to remove them, it’s better to reduce them in level until they’re at a more suitable balance against the main signal. With that goal, the Squeak section was quite successful—even with a heavily compressed torture-test acoustic guitar recording I threw at it—with the Sensitivity (squeak detection) and Reduction sliders set just a little bit above their (halfway-up) defaults.

The Pick section also worked well, though it was subtle in most cases. I kind of liked that with Reduction pushed, you could almost approximate the softer sound of finger-picking from a part played with a pick.

Those who came up in the digital era may never have been subjected to the annoying periodic pitch variation and warbling in a recording made on an analog tape recorder with an unsteady motor turning the reels. But with a dub from an older analog tape—especially from a cassette recording—the wow & flutter issues of that bygone era can still put in an appearance. While the Variable Pitch module in the previous RX version let a user address that manually, the new Wow & Flutter module in RX 8 shoots for a more efficient automatic solution. Both Wow (slow periodic pitch variation) and Flutter (faster pitch variations) are addressed. You need to estimate the speed of the Wow by ear, and set the Sensitivity of the (faster) Flutter removal to a point where it gets rid of unwanted pitchiness without accidentally affecting the intended pitch variations of musical vibrato. In practice it seems to work pretty well, at least on an old cassette dub with noticeable wow that I tried it with.

The previous Loudness utility module is replaced in RX 8 by the new Loudness Control module. This module is all about setting the proper average Loudness level of a recording/mix to meet the new mandated (and enforced) broadcast and streaming standards that limit maximum average loudness (in an effort to bring an end to the infamous Loudness War). 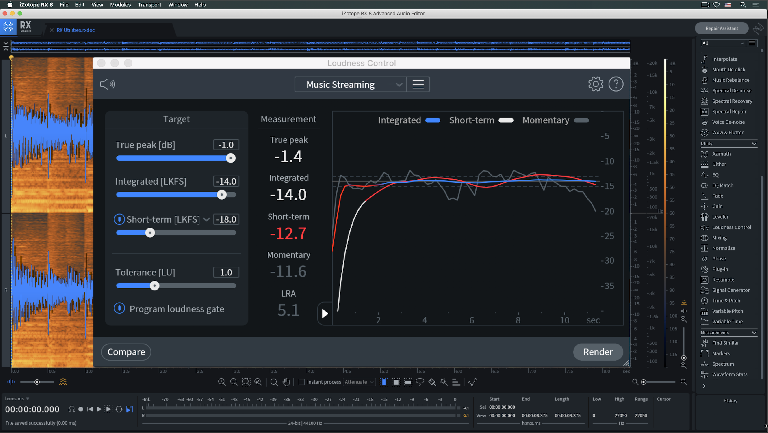 While the specifics of that topic are too elaborate to get into here, Loudness Control does everything automatically. It analyzes the audio and determines the amount of static gain change to set the average level to the chosen standard; there’s also a limiter to enforce adherence to current maximum peak level standards. Loudness Control incorporates the most up-to-date versions of all those standards—including the higher average level standards for streaming music—but you can also adjust the settings by hand. A new history display shows the various required level measurements over time, which can be quite helpful.

While Music Rebalance is not a new module in RX 8—it’s been included since RX 7—changes made under the hood to the algorithms for isolating Voice, Bass, and Drum parts in a full mix have been significantly improved. As per its name, the main purpose of Music Rebalance is to slightly adjust the levels of those key parts in the full mix, a common need for mastering engineers. This module makes that easy, eliminating the need to resort to classic mastering tricks like M-S processing, which are more limited in their ability to isolate specific parts. Music Rebalance always did a good job of this, and the improvements provide even smoother results.

But of course, with this kind of processor many people are going to try to use it to completely remove or extract a part from a full mix—especially the vocal. The first iteration of Music Rebalance wasn’t tuned for this, and really couldn’t effectively isolate a part, like a vocal, without prominent glitches and audio artifacts. But in RX 8, this has changed to a surprising degree. 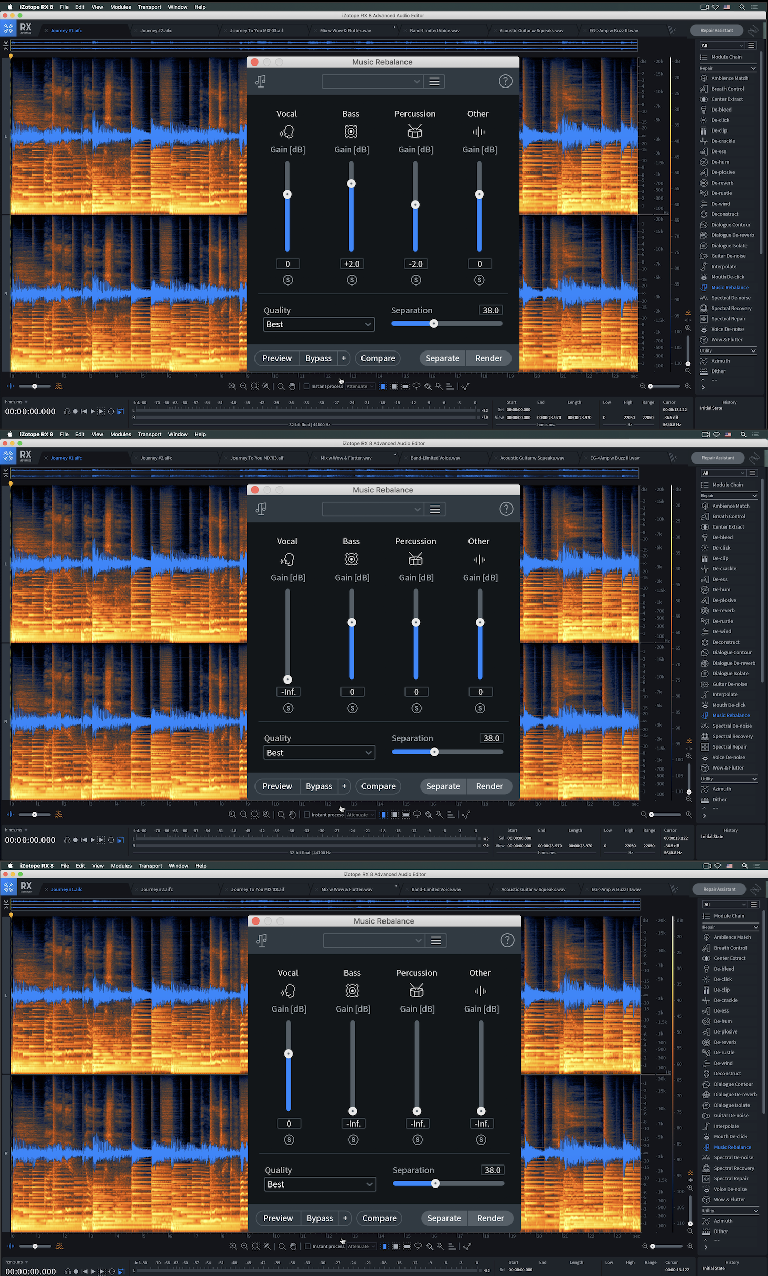 Now, at this point in time, I don’t know of any software that can completely isolate a musical part without artifacts 100% of the time. This is especially true for mixes with dense instrumentation and heavy mastering compression and limiting. But with a more open, dynamic mix RX 8’s Music Rebalance can successfully remove a lead vocal, bass, or drumkit from the mix, or extract the part as a solo track. The isolation is surprisingly effective—at its best, the result is 99% glitch-free, and any small artifacts would go unnoticed if the extracted track was used within a different arrangement. Even with more difficult tracks that resulted in somewhat more noticeable artifacts in isolation, the results would mostly still be eminently useable if those parts were replaced or blended into a new arrangement.

As the technology of music separation—isolating specific parts in a full mix—slowly but surely advances, RX 8’s improved Music Rebalance is a big step in that direction.

So on the whole, RX 8 offers some welcome new additions, and some significant improvements. And for anyone who has yet to take advantage of the processing capabilities of RX, RX 8 would be an ideal place to start.

Cons: Some modules only available in the more expensive Advanced