Language
iZotope's Neutron promises a leap forward in how we use software when mixing music and audio. There's been plenty of buzz about it since its announcement, but does it live up to expectations?
Watch our iZotope Neutron tutorial video course in the AskAudio Academy here.

iZotope is well known as a purveyor of some of the best software tools around for mixing, mastering, post-production, and other creative tasks in the studio, so when they introduce a new processor, expectations tend to run high. Well, their latest offering—Neutron—definitely lives up to those high expectations. 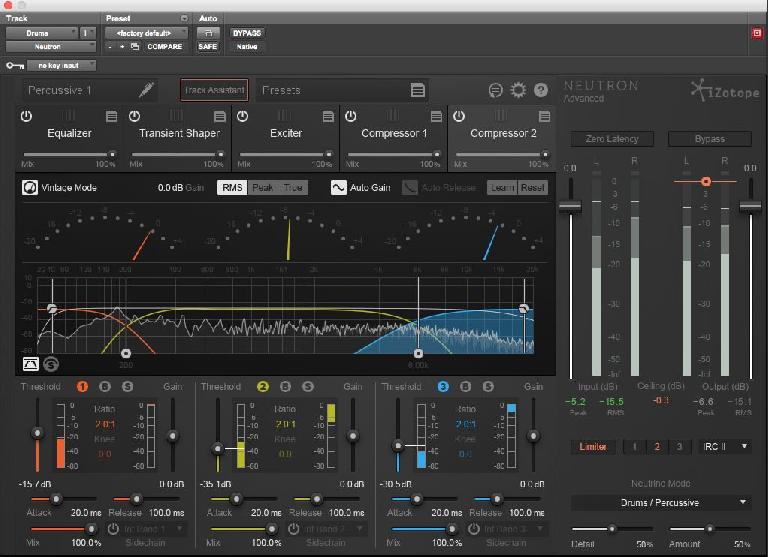 On the surface, Neutron appears to be an ordinary—if especially full-featured and good-sounding—Channel Strip plug-in (intended specifically for per-track use rather than master bus applications). It’s available as a regular and an Advanced version—Neutron Advanced includes additional separate plug-ins for each of the included processors, along with surround capability. With either version you have a flexible arrangement of processing modules, an output Limiter, and even an option to run in Zero-Latency mode. But hidden away beneath the surface are several surprises—Neutron provides a number of intelligent analysis, display, and auto-mix features that lift it well above the crowd. Those features offer both novice and experienced mixers some extremely useful tools for mixing.

There’s the terrifically convenient Masking Meter, which makes quick work of tracking down and alleviating problematic masking in a mix, and the built-in Neutrino processing (just as in their new free Neutrino plug-in), which applies Spectral Shaping for finishing, for a very subtle “lift” on each track. And Neutron’s signature feature is the full-blown automatic analysis and mix setup provided by the Track Assistant, which automatically creates per-track mix settings—utilizing the plug-in’s excellent processing modules—based on intelligent analysis of the instrument type and specific audio in each track.

So what are the specifics Neutron provides for intrepid mixers in its arsenal of tools?

Neutron is laid out as a Channel Strip, with five main processing modules, and a separate output section. 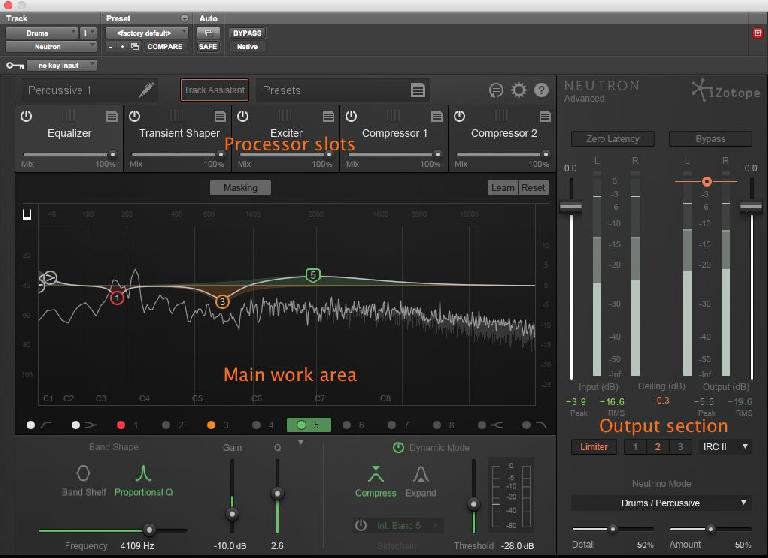 The five main processor slots each contain a different processor, with two Compressor modules. You can only have one of each processor (though the compressor is doubled up by design), but you can re-arrange the order of the processors, to taste, and enable or bypass each. There’s also a Mix slider for each module, that lets you dial up parallel processing on a per-module basis.

The EQ is a 12-band parametric design, with high- and low-cut Filters, high- and low-frequency Shelves (with several response curves, including one from the Pultec model from Ozone’s Vintage EQ), and 8 bands of peaking (bell curve) fully-parametric EQ. Except for the Filters, each band can be individually switched to Dynamic EQ mode, where boosts and cuts will only occur when the signal in that frequency range crosses a user-set Threshold (this can also be controlled via external sidechain—very useful when using the Masking Meter function).

All of the other modules can be set up as either single-band or multi-band processors, with up to three user-configurable bands. Each offers user-adjustable Crossovers (though another helpful “Learn” feature will optionally determine suggested settings for you), and the Compressor and Transient Shaper let you apply parallel processing on a per-band basis, as well.

The Compressor has a choice of modes—a more full-featured clean mode, and the more characterful Vintage mode (as per Ozone’s Vintage compressor), which adds some analog warmth and response. Depending on the mode selected, you’ll see either a histogram showing real-time gain reduction, or more traditional VU-style gain reduction metering. RMS or Peak detection options, and an optional Auto-Release help you dial up the most musical response.

The Transient Shaper offers multi-band Attack and Sustain (Release) controls, along with three response curves, which have a noticeable effect on transient response. And the Exciter is more than just a traditional multiband high-frequency enhancer—it’s really a flexible saturation processor, which provides the overdriven sound of Tubes, Tape Saturation, Retro saturation (transistor drive), and an option labeled “Warm”, which is a softer type of tube drive that creates even harmonics, for a gentler saturation effect. And thanks to the XY grid in each band, you can combine these different forms of saturation/excitement, just like you’d have in a real analog studio, where signal would be passing through multiple hardware devices, all contributing their own specific analog character.

On the right is the output section.

Fig 3 The output section in Neutron, with (top-to-bottom), the metering, output Limiter, and Neutrino options

Here you’ll find the meters, which should be familiar to users of iZotope’s other products. They’re combined average and peak displays, with some options. The average response can be set to either RMS or Short-Term—Short-Term is a standard developed for broadcast applications, that tries to make the metering better reflect actual loudness perception. While it may be required for some pre-broadcast post-production work, it could be a helpful choice for music mixing as well. Also for broadcast/post-production, you can choose True Peak metering which detects potential inter-sample peaks (also adhering to mandated broadcast standards).

The output Limiter offers a choice of three of iZotope’s well-regarded limiter types. You have the low-latency IRC LL, the transparent IRC II (from Ozone’s Maximizer, though here, again, it’s really for per track use), and a soft-limiter labelled “Hard”, the only one which can operate in Zero-Latency mode.

Neutrino has three main intelligent mix/analysis/display features. Neutrino is the simplest—it’s a 32-band Spectral Shaping processor, intended as a “finishing” processor, to add some very subtle extra clarity to individual tracks, and accumulatively to the mix as a whole. 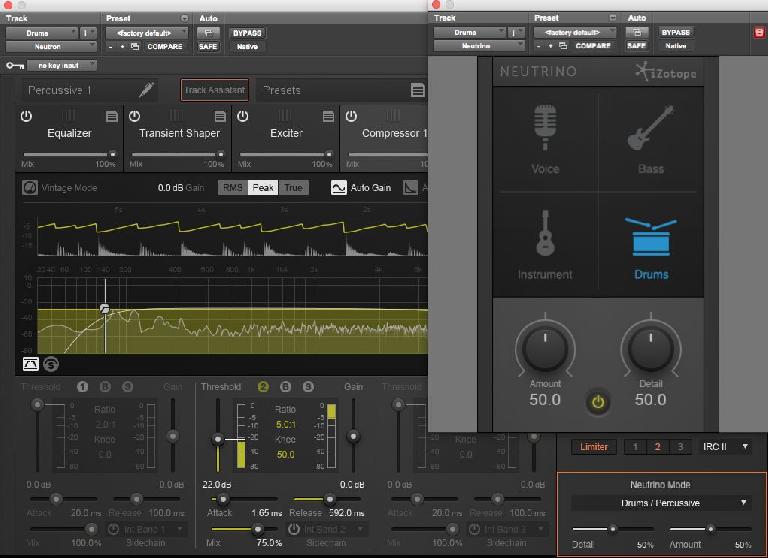 The version built-into Neutron is pretty much the same as the free Neutrino plug-in iZotope has made available on its own, except that here, when enabled by the automatic Track Assistant function, it analyzes the track and automatically detects the type of instrument—there are choices for Drums, Bass, Guitar, Voice, and “Clean” (kind of a Bypass mode).

Neutrino’s Spectral Shaping—originally developed to increase transparency for iZotope’s IRC IV mastering limiter/maximizer—applies very light dynamic processing to the audio, divided into 32 separate bands. It’s kind of like an automatic 32-band dynamic EQ, but specifically designed for extremely subtle enhancement—like lifting a veil from a track, helping it to float just a little better above the overall mix.

The Masking Meter is a display feature that adds a terrific layer of convenience to the plug-in. It’s intended to make quick work of dealing with problem masking between two tracks in a mix—remember, masking is when certain frequencies in a track are covered up by those same frequencies in another track—the result can be a part that doesn’t cut through the mix as well as it could, or even has its tonality altered by being masked at particular frequency ranges.

Enabling Masking Meter on an affected track displays two tracks at once—the one you’re on, and the one you suspect is causing the problem masking. 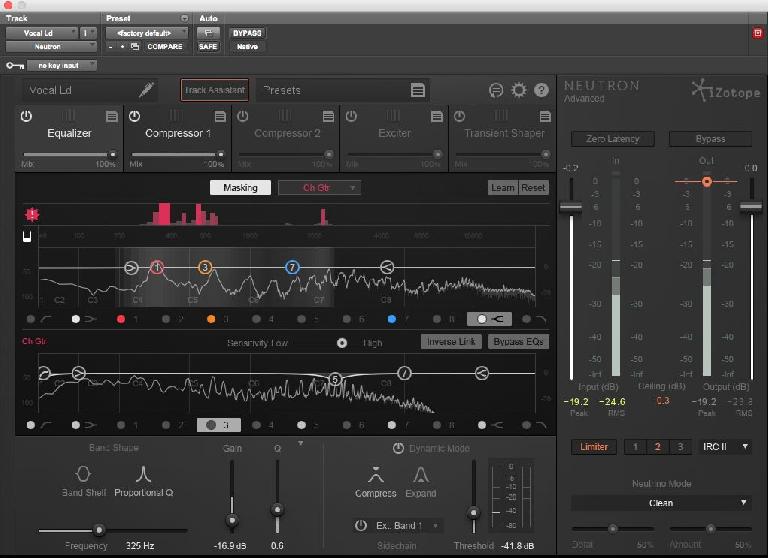 The real-time display shows the frequencies at which the masking is occurring—you can then dial up corrective EQ on either track, right from within the same plug-in window, including sidechain-controlled Dynamic EQ, for a particularly elegant and efficient solution to masking issues.

Finally, the main event of Neutron’s intelligent mix processing is the Track Assistant. Clicking this simple button will tell Neutron to analyze the track, use the Neutrino algorithm to determine the voice/instrument, and then set a full mix for that track, using its specific appropriate algorithms for that instrument type. 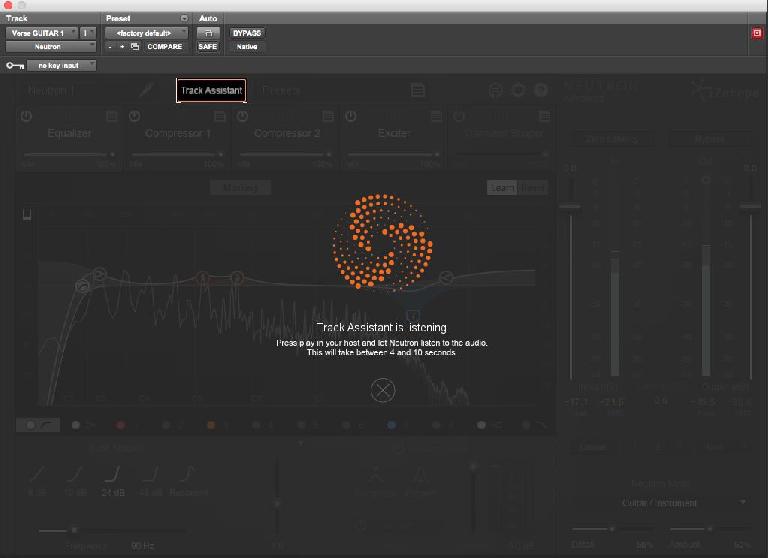 The many things Track Assistant does include the following:

The specific settings will be based on the current mode selected for Track Assistant—Subtle, Medium, or Aggressive each will result in a different character and degree of processing, and three additional presets (available for all of the modes) each push the resulting auto-mix in a different direction (Broadband Clarity, Warm and Open, Upfront Midrange).

Audio Example: Here are results of applying Track Assistant to individual tracks in a mix, with different modes and presets used (4 bars original audio, then changing every 4 bars):

Despite some initial skepticism/grumbling about AI-style mixing, I was quite pleased by how well Neutron acquitted itself when making these mix settings. Of course, while you still have to dial up the overall balance among tracks yourself, many right-brain musicians and producers I know would be more than happy to just use Neutron’s mix choices pretty much as is—they provide a suitably finished sound, and with the different settings you’ll get from the different modes and presets, along with the additional variations you could get if you mix & match the Neutrino instrument modes (which govern the processing choices Track Assistant makes in all the other modules as well), there’s a fair bit the user can do to affect the results, without really doing any manual mix processing. I also think it could be a great learning tool for novices—a little reverse-engineering of Track Assistant’s auto-settings could provide some excellent ideas for mixing approaches and techniques, as fledgling mixers get more experience under their belts.

Naturally, more experienced mixers will take these settings as merely useful starting points, making significant changes and applying additional effects to taste, but even just as jumping-off points, Track Assistant can save a lot of time (and ear fatigue) that would otherwise be spent dialing up the most basic mix starting-point settings by hand, letting the mixer jump right in at a potentially more creative stage of the mix. That alone should making it a welcome addition even to the most skeptical old pro’s toolbox.

Anyone who spends  any time mixing should check out Neutron—not only do you get a host of iZotope’s best processors (some with the company’s latest algorithms), but the intelligent mix features are definitely worth exploring—whatever level your mixing skills.

Cons: It may take new users—especially those not already familiar with iZotope’s products—a little time to fully get a handle on everything

Watch our training videos on iZotope Neutron in the AskAudio Academy here.

Jay Asher
Joe, would you recommend the Advanced version even if one is not doing surround?
Joe A
Hi Jay -

Apart from the Surround capability, the Advanced version includes the individual processor plug-ins. While I've been sticking with the full Channel Strip, to get the best sense of how the entire package works, I think most experienced mixers would want to frequently use specific Neutron processors alongside their other favorite plug-ins, so it'd make a lot of sense to have those available, especially for bigger mixes. My review -- and iZotope's marketing materials -- are naturally focused on the intelligent mix features, but the processors are so good even on their own, it'd be nice to have 'em available as separates..