Language
Oh how I've missed the iZotope Vinyl plug-in which vanished sometime ago. But now this fan favorite for lo-fi sound has been re-released with a new spin down featureÂ and AAX/VST3 support. It's FREE!

There was a time in my life when the iZotope Vinyl plug-in literally found itself being used in every project I was working on. Whether to add a little retro warmth and fuzziness to tracks, or for creative gitch and distortion. I just loved it. So it was a sad day when iZotope ceased development and it didn't make it into the 64-bit world.

But wait. That sad day feels long gone. iZotope have re-released the awesome lo-fi Vinyl (for free) and added a new feature and support for AAX and VST3. Oh and Happy Birthday to iZotope! Here's what they tell us about it:

Cambridge, MA (February 2, 2015) - iZotope, Inc., makers of award-winning tools for audio production, is announcing the re-release of Vinyl, their free vinyl simulation plug-in. By emulating the characteristics of vintage records and record players, Vinyl is the ultimate lo-fi weapon for anyone looking to add the dirty, dusty feel of a different era to their sound. 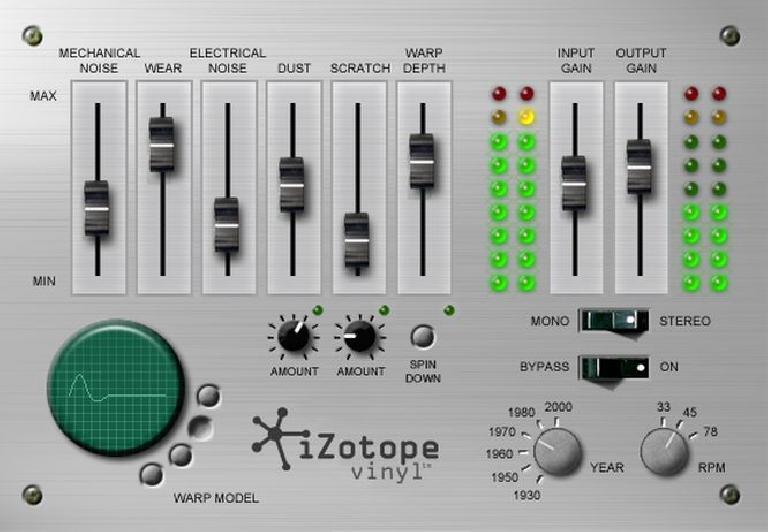 The new version of Vinyl has been updated to support modern operating systems and audio editing software: the plug-in is now 64-bit compatible on both Mac and PC and supported formats now include AAX and VST3. Vinyl also features a new Spin Down button that simulates slowly stopping playback of a record, with results that can range from a dramatic "record stop" to a subtler nuance on an individual instrument. All of Vinyl's classic features allow a user to simulate the dust, scratches, crackles, pops, and warping of a worn record as well as the mechanical noises of a turntable. In addition, the Warp features are now available for use in all supported plug-in formats.

Re-issued as part of the company's 15th birthday celebration, the re-release harkens back to iZotope's very beginnings in a dorm room at MIT (Massachusetts Institute of Technology). Back in 2001, Vinyl was iZotope's very first product-experimental audio processing software made by a small group of like-minded engineers and music lovers who wanted to bring more high-quality creative tools to the audio community. The novelty of a free digital effect that offered such flexibility over nostalgic, analog sounds made the plug-in an instant success. Before long, Vinyl's touch could be heard on everything from songs to soundtracks to sound effects for film, television, and video games.

"When we look back on iZotope's history, we're so grateful to the early fans of Vinyl who championed our efforts," says Mark Ethier, iZotope's CEO and co-founder. "It's their support that paved the way for Ozone, Trash, RX, and everything that we have created since. In this birthday year, we're excited to bring Vinyl back as a thank you to our old friends, and to help us meet new friends, too."

Availability and Pricing: Vinyl is available now for free.

How to get Vinyl:

Learn more about Vinyl at www.izotope.com/vinyl