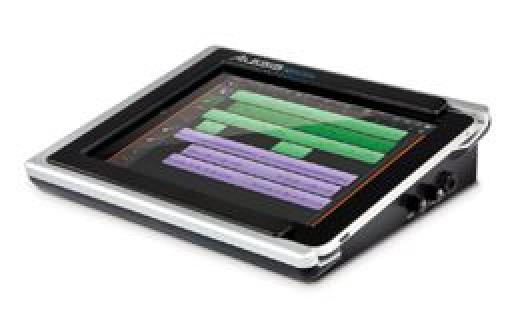 Language
There are a growing number of accessories and controllers aimed at the iPad-wielding digital musician. Mike Watkinson takes a close look at the new Alesis iO Dock and all it has to offer.

Ever since the first iPad was released, musicians have been throwing devices at it, trying to interface audio and MIDI with the sometimes frustrating self-contained box. Most devices hang awkwardly out of either the headphone port or the dock connector, and provide just one of the above, preventing the use of that port for what it was designed for. Until now, that is. Alesis has released the iO Dock, which seems to offer all a musician could want, and maybe more than they thought was possible. Too good to be true? Read on...

I have to admit I was a little underwhelmed by the quality and weight of the iO Dock. Perhaps because of my high expectations (it does look metallic in the pre-launch publicity pictures), but although it looks solid it is actually quite light and slightly plasticky in feel (well, it is made of plastic) Unlike another device I have tested recently, the Akai SynthStation 25, which leaves the iPod touch 4th gen. hanging in mid-air from the dock connector (it was actually designed for iPhone 3G), Alesis supplies an extra tray if you are an iPad 2 owner, as it has a thinner body than the original iPad. This locks into place and, once the iPad has been docked, the setup feels a lot more substantial. The iPad is held firmly by the iO Dock and with rubber feet and this makes for solid mounting, well suited for live use. 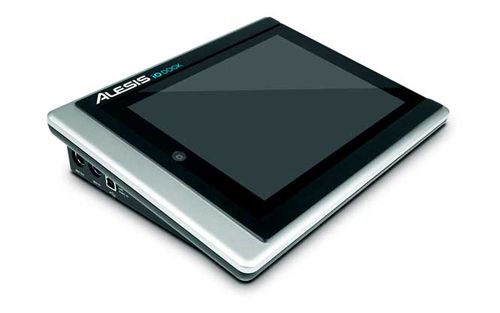 With 6 V 3 A PSU connected and switched on, the iO Dock charges the iPad, and supplies phantom power to 2 microphones via the XLR connectors, which double up as 1/4” TRS connectors for line/guitar input. Input 2 has a switch to choose between Guitar and Mic/Line, the impedance of which is chosen so that it is also appropriate for active guitars. Both inputs have a trim/gain control. Further connectors on the back panel include a foot switch socket, Video Out via RCA socket, and an anchor post to secure the PSU cable in live situations. The Video Out option was disappointing as I had hoped to be able to mirror the iPad's video output while accessing the audio options offered by the iO Dock, but this option is only supported by a small number of apps (YouTube, Keynote and a few others). 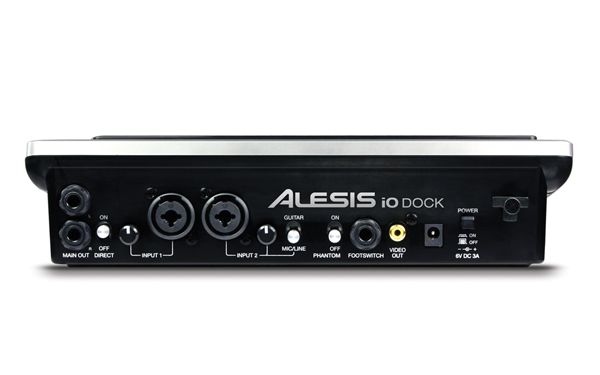 The direct switch allows the monitoring of inputs through the hardware outputs or headphone output, which have independent volume controls. This avoids any latency caused by whichever iPad app you are using. 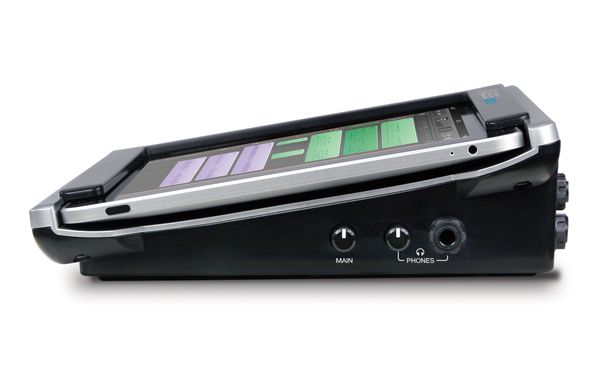 On the left-hand side panel are two old-school MIDI connectors (5-pin DIN, remember those?) and a type B USB socket suitable for the connection of a computer, to capture and playback MIDI information. 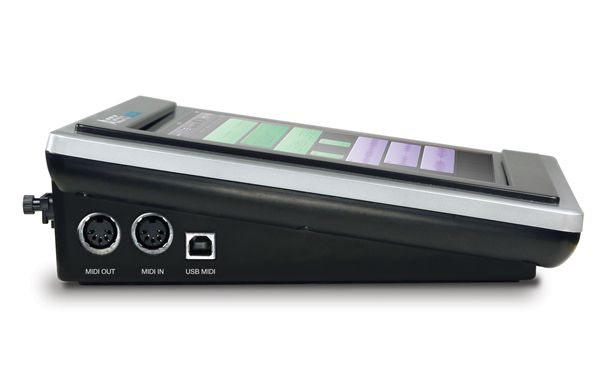 For my money I would love to have seen a type A USB socket suitable for the connection of USB-powered MIDI keyboards, without the need to attach a computer (come on Alesis, the iPad is a computer!) And while we're at it, what about a video output that supports VGA and HDMI just like the dock connector on the iPad2 itself? Maybe on the iO Dock Mk2?

As a docking station the iO Dock performed flawlessly, with each socket giving access to inputs and outputs as expected. The microphone preamp circuitry is a little noisy at the top of its range, as is typical with most audio equipment of this quality. A revelation for me is that the iPad does support stereo audio input: connect two microphones and the stereo input option becomes available in the voice recorder instrument in GarageBand (see image below). 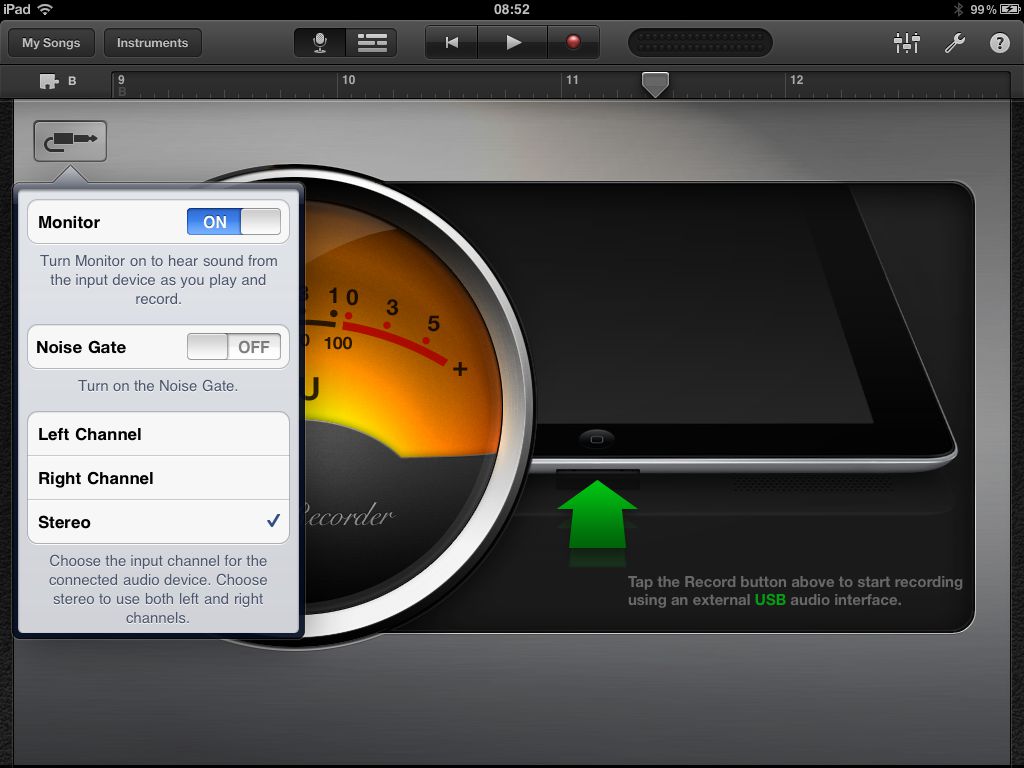 So with an app like TwistedWave Audio Editor, or indeed GarageBand, the iPad could function as a stereo field recorder, the only drawback being the requirements for power.

So, an intriguing concept: take one iPad—a mobile computing device—and dock it to a desk-bound audio/MIDI interface, and you take away the key reason for owning an iPad, namely its mobility. What you get in return (with the right app, of course) is a fully-featured 2-in 2-out simple DAW with MIDI capability. Combine that with the multitude of available audio and MIDI-related apps and you have a system that cannot fail to improve your creativity. Add to that the suitability of the iPad & iO Dock combination for live use, and the iO Dock begins to make a lot of sense!

Find out more about the Alesis iO Dock.

Watch the Alesis promo video for the iO Dock with Dan Radin below:

fredwardo
Hey Mike, excellent review! This thing has had my curiosity peaked ever since I heard about it. How big is it? I'm just wondering if it makes the iPad bulkier than a MacBook in which case, the functionality of the MacBook wins by a longshot. Love hearing about this stuff! Thanks!
thirdspace
The IODock measures 6.5 x 21.5 x 27.5 cm; the smallest MacBook Pro measures 2.41 x 32.5 x 22.7 cm. So it's closer to the smaller MacBook Air - but these are much bigger when you open the lid! Also they are significantly more powerful than an iPad and run a completely different set of software. On the other hand the IODock has a lot of sockets and controls, none of which come with a MacBook. Plus you could get two of these and two iPads for the price of a MacBook Pro (and no audio interface). So quite difficult to make any direct comparisons then!!

Glad you liked the review

I got Alesis iO Dock and VocLife ....and gues what ?
VocaLife told me that mic input is not supported .

What for big dissapoitment .
How they can permit them selfs to not support the best music docking in the world i can`t undertand ?

Please be so kind to give me advise which software I can use for vocal processing which is compatible with iO Dock .
Thanks and All the best


thirdspace
Sorry to hear about the issue with VocaLive. When you say 'processing' what do you want to achieve?
scrumhalf09
has anyone discovered how to remove the iPad from the dock? without doing any damage
billythefish
Thinking of purchasing one of these and using my ipad for live gigs, I sing solo to backing tracks (currently minidisc format)
If I change to performing using the ipad,
1- will I use itunes to play the tracks ?
2 - connect my normal mic through the idock
3- I like reverb on my live vocals, can someone advise the best app to use please

Thanks in advance
Billy