Language
CINEMORPHX from Sample Logic is powered by one of the most impressive Kontakt Player engines we've encountered. If you enjoy manipulating waveforms into otherworldly sounds you'll love this.
NOTE: We worked with Sample Logic before the official release of CINEMORPHX to create a video course showing how to use this impressive instrument. The CINEMORPHX Deciphered course is available in The Academy, plus we'll have a full review (not a preview/news item like this article coming very, very soon!)

Sample Logic has just released their latest instrument/library for the Kontakt/Kontakt Player engine—CINEMORPHX. Continuing in the Sample Logic tradition of taking samples and waveforms and twisting, mangling, processing, and shaping them into dense, rich, swirling, often otherworldly sounds, CINEMORPHX delivers a collection perfectly suited to sound design, scoring for film, TV, and games, and musical projects that would embrace its wonderfully warped sensibilities.

CINEMORPHX incorporates not one, but three full libraries into this massive collection of sounds—the raw material comes from three now-discontinued instruments from the Sample Logic catalog—Air Expanded, Synergy, and Elements. Consolidating these samples into one massive collection resulted in a library of over 30 GB worth of sample data. But CINEMORPHX is not just a re-bundling of those libraries—the presets, effects, and patterns are all brand new. Sample Logic proudly promises thousands of samples and presets—an impressive collection, covering everything from swirling, morphing pads, to frenetic loops and rhythms, to traditional playable instruments (but with a twist), for the old-school players among us. 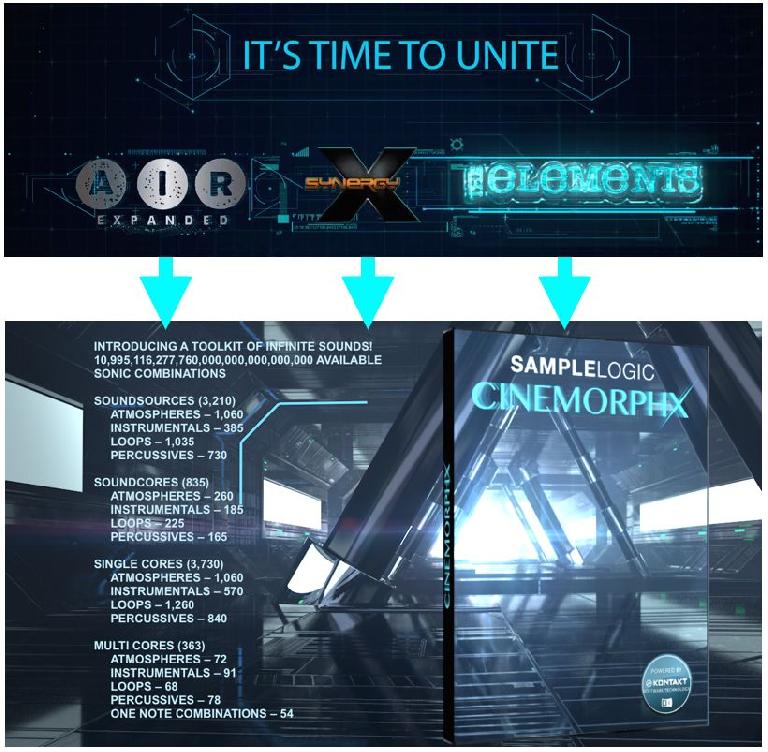 CINEMORPHX brings a vast collection of new presets to a comprehensive sample library.

But CINEMORPHX is not just a one-finger-on-one-key virtual band, even though it does provide many dense, rich patches that will happily churn along for you. It includes a comprehensive set of programming controls, for customizing presets or diving into your own sound design.

A preset in CINEMORPHX is made up of up to four Soundcores, each of which contains two Soundsources (sample keymaps)—that’s up to eight sample layers in all. Each Soundcore has a full set of programming controls (envelope, filters, a convolution processor, four effects, and LFO and sequencer mod for volume, pan, pitch, and filters). There are also six Global (Master) effects, and numerous controls for morphing between samples, cores, and effects (morphing looms large in the CINEMORPHX universe!). Morphing can be done by hand, automatically via sequenced patterns (step and XY), and in real time via external MIDI control. 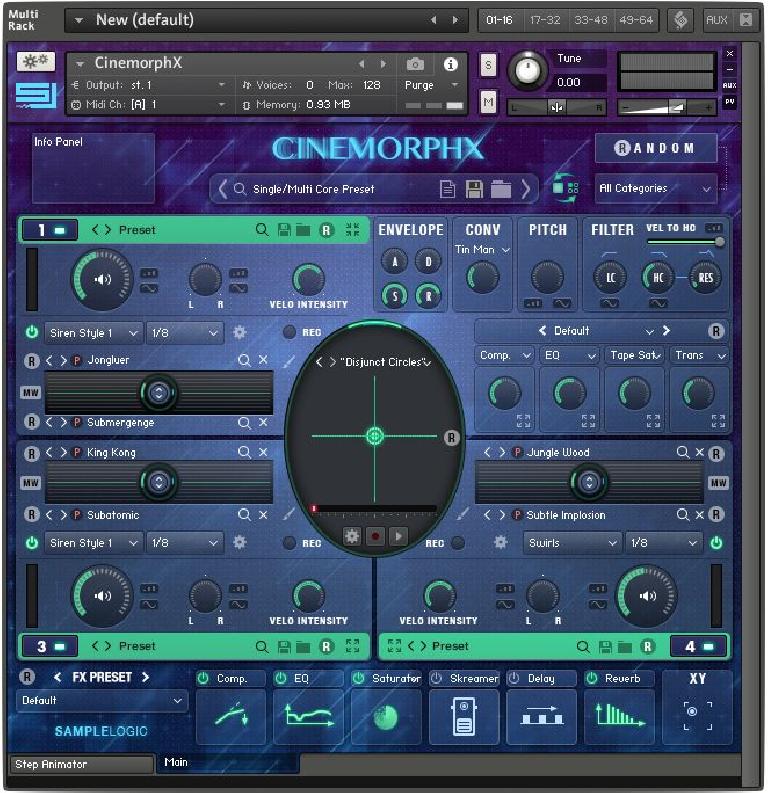 The Main page in CINEMORPHX.

On top of that, there’s a second page, which accesses the Step Animator, an especially capable arpeggiator/sequencer. Just like in the Main page, the Step Animator’s 4 alternate Patterns and numerous controls can not only be programmed for bouncy, bubbling sequences, but you also have a fair bit of real-time control for “playing” the patterns, and adding flourishes and touches like Freezes and Stutters (though the latter can also be built into a pattern). 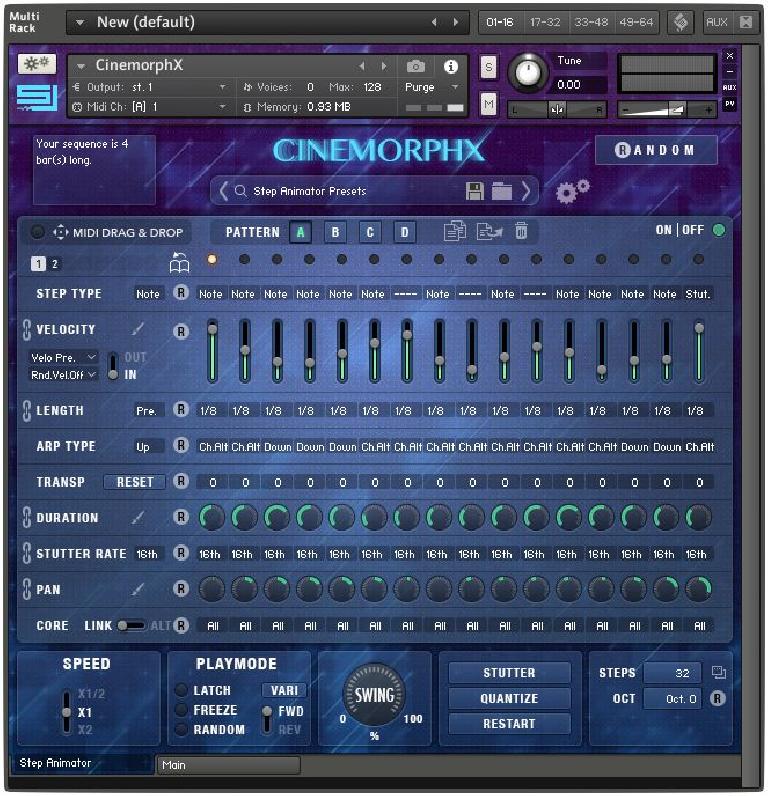 There’s even a useful, flexible Randomizer on tap, which can be selectively applied at the user’s discretion.

The deep dive (into sound design)

While you can jump right in and start making music straight out of the box, utilizing the many busy, shifting, morphing factory Presets, when you’re ready to start digging in a little deeper, there’s a lot in there to absorb. With all this control, CINEMORPHX users could certainly do with some help getting into the details, so Sample Logic has not only included the usual PDF manual, but has taken the extra step of bundling a video course with each purchase, courtesy of macProVideo/AskVideo. The 20 tutorials cover everything from installation and authorization, to library management, to the full range of programming controls, effects, and morphing options, not to mention the creative capabilities of the Step Animator.

Watch a preview video from our CINEMORPHX Deciphered course:

Here are a couple of quick tips for working in Sample Logic’s latest creation:

1. Morph, sequence, and arpeggiate both wisely and well

Shifting sounds and textures are CINEMORPHX’s stock & trade, and there are no less than five “animators” (sequencers, arpeggiators, and XY controllers) for that purpose—and that’s not counting the multiple sequencers for the various Soundcore parameters. On top of that, many of the raw samples are loops, or already contain shifting rhythms or textures. When doing your own sound design it can be easy to over-use all these opportunities for motion, and when customizing a Factory Preset, a little reverse-engineering would be in order as a start, to determine where all that rhythm is actually coming from! 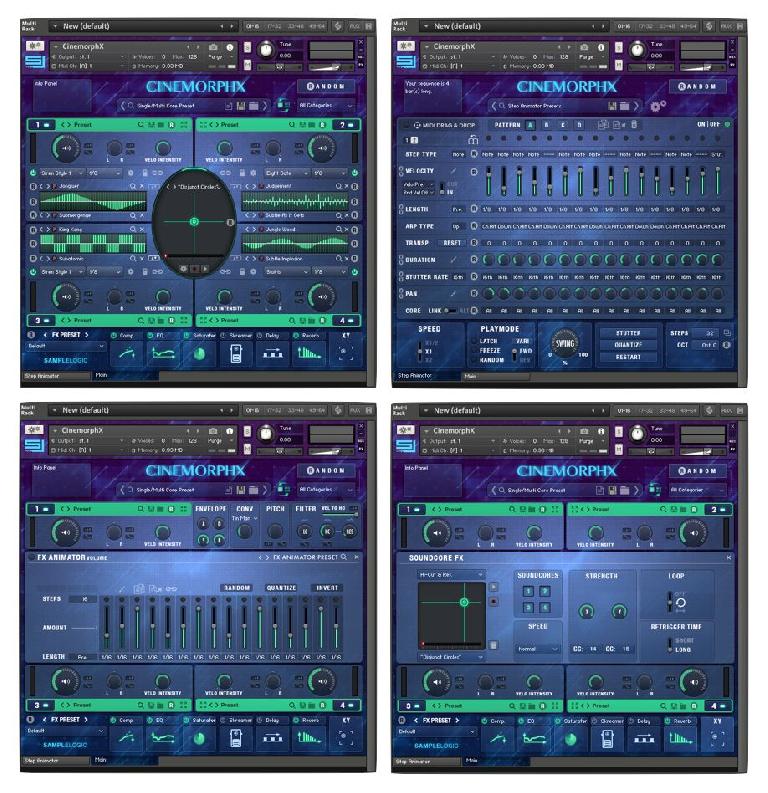 Most controls in CINEMORPHX can be assigned to external MIDI controllers for real-time “play” (using the Kontakt interface), but you have to be aware of the quirks. The six active Global (Master) effects each have a control panel, and controls in these can be MIDI-assigned, but these will be shared assignments—the same-numbered control (i.e., the fifth knob) in all effects will respond to the MIDI CC assigned in one effect. However, only the open or last-opened effect will actually respond in real time—something to keep in mind when controlling these effects via MIDI. Additionally, while CINEMORPHX provides its own menus and formats for storing user preset data, MIDI assignments will only be retained when a user patch is saved as a Kontakt .nki file.

Sample Logic’s latest offers a comprehensive collection of rich, finished presets, as well as the tools to really dig in and make these sounds and effects your own. If you’re in need of a massive collection of production-ready sounds and instruments, CINEMORPHX may be just the ticket.

Watch out for the full review this week on Ask.Audio... and the CINEMORPHX Deciphered video course in The Academy.