Language
The latest addition to NI's Maschine hardware family has a whole different focus to its siblings. We caught up with Steffen Dierolf who knows more about it than anyone else, for the inside track.Â

AskAudio: Hi Steffen! Can you tell us a little about the genesis of the idea for Maschine Jam? Obviously you already make Maschine Studio, Mikro and other hardware. What prompted you to want to create Jam?

Steffen Dierolf: The most important thing was that we wanted to connect with a different group of users. Although the existing Maschine hardware has sequencing capabilities, it’s kind of limited. For example, you only got an octave and a half in keyboard mode. With Jam’s 64 pads you actually get more range than a 49-key keyboard. Also—and this might sound weird, I keep hearing that Maschine is really good for hip hop! But Jam is aimed more at people who work with loops, who program stuff rather than doing finger drumming.

And the Touch Strips seems to be really encouraging people to play live. So for me there’s a crossover between DJ and producer. Was that something you had in mind when you began designing Jam?

It was clear from the beginning that we wanted to see Jam on stage much more than we had seen Maschine hardware on stage before. Another of the big ideas was that you could see your project on the hardware. So you might do some finger drumming but you also get a much better view of the whole project as you perform. 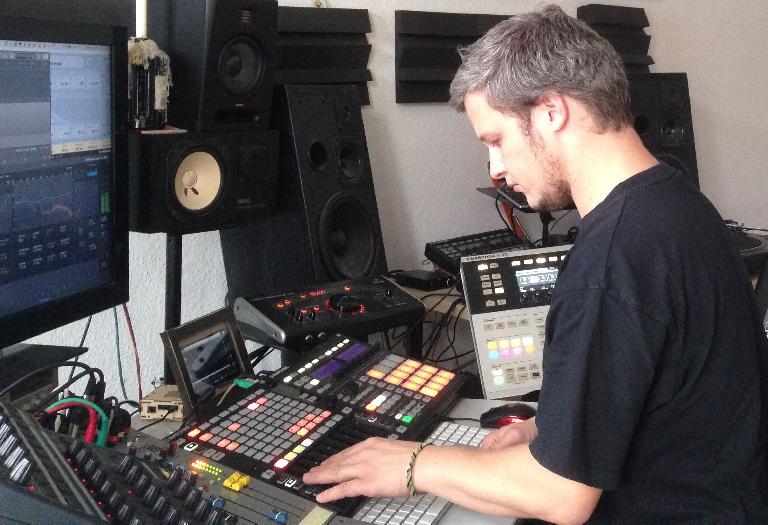 Our aim was to make Touch Strips work even better than they already do on other controllers.

How long have you been working on Maschine Jam?

When I came onto the project, a lot of the hardware specifications were already in place, so I didn’t kick it off. But I can tell you that on the software side, we had worked on it for more than a year. In terms of the genesis of the concept, that probably goes back a couple of years.

Some people have noted that the buttons on the hardware aren’t velocity sensitive. I’ve used them and they’re a lot of fun, but what’s the thinking behind that decision?

We wanted the focus to be on triggering things and we thought having the click of the buttons was really nice. But velocity sensitivity used with click buttons isn’t actually a great experience. So in the end the click won out! And it’s nice to have this positive feedback from the hardware, like “yes, I clicked something!” And also we wanted to keep the pads a specific size.

At the borders of a button you don’t have a great consistency in velocity triggering. There’s always a sweet spot and the bigger the pad, the bigger the sweet spot. The user would have to hit the pad perfectly every time, and that wasn’t going to work in this form factor.

Jam is obviously a great controller for Maschine but is there a reason you chose not to include screens like you do on the other Maschine hardware?

There are a few reasons. One is USB bus powering: it already has over 500 LEDs in it so it’s quite a complex device. To add screens would have exceeded the limits of a USB bus and a power supply would have been required. Adding screens also would have affected the price of the unit. But mainly we didn’t think screens were required! I think once you have learned the workflow, you don’t need to look at screens any more on the Jam hardware. Maybe it requires a tiny bit more work initially but once you’re set up, it becomes really intuitive. We have designed it so that the lights and buttons are able to convey some of the information you might otherwise have to get from a screen.

We need to talk about Touch Strips! Before people got hands-on with Jam, they didn’t always understand how cool they were. Tell us about how you designed them and made them so responsive.

It was risky of course to go for touch strips, because they don’t always have a great reputation in the industry. But we have several devices already that use them and we liked the idea of not having any jumps when changing pages and things like that, features you might normally only get from a motorized fader.

So our aim was to make them work even better than they already do on the other controllers. We sourced some brand new touch strips and wrote our own firmware for them, and really tried to get the most out of them. And the results are stunning! They are really sensitive and precise and they have this Dual Touch capability. We even invited some producers to try them. They came into the room saying they didn’t like touch strips but they left after trying them with smiles on their faces! When people try them they realize they are a really serious tool. 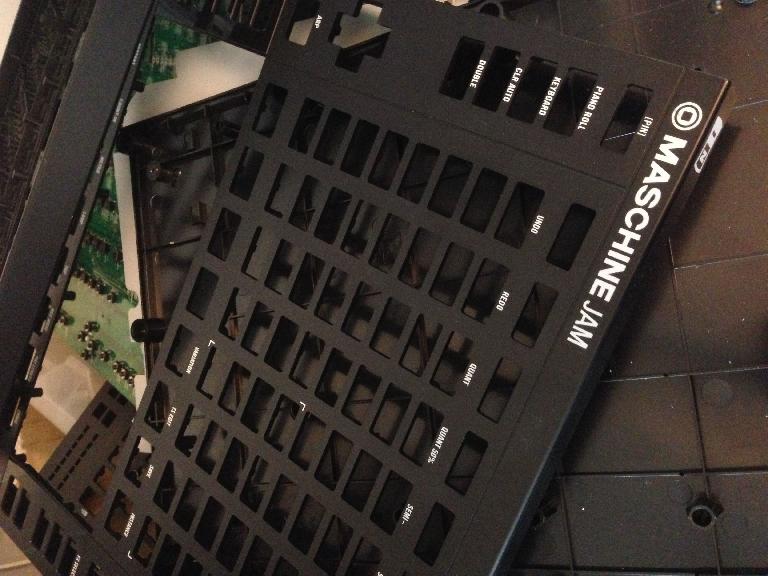 The beginnings of Maschine JAM...

One of the coolest things I discovered was that you can actually swipe across all eight touch strips to play them! But that’s more an observation than a question.

Jam isn’t only a Maschine controller, it’s a very capable Ableton controller and you can control other DAWs. What plans do you have for scripts for other DAWs and what your thought process is in that regard?

The main motivation was that Jam should be easy to use. We actually tried to ignore the paradigms introduced by other DAWs and focus on the idea that people should be able to learn the Jam hardware and then that familiarity should translate easily to controlling other software. You only learn it once.  For example, once you know how to duplicate a clip in Maschine, you don’t have to look up how to do it in Ableton. 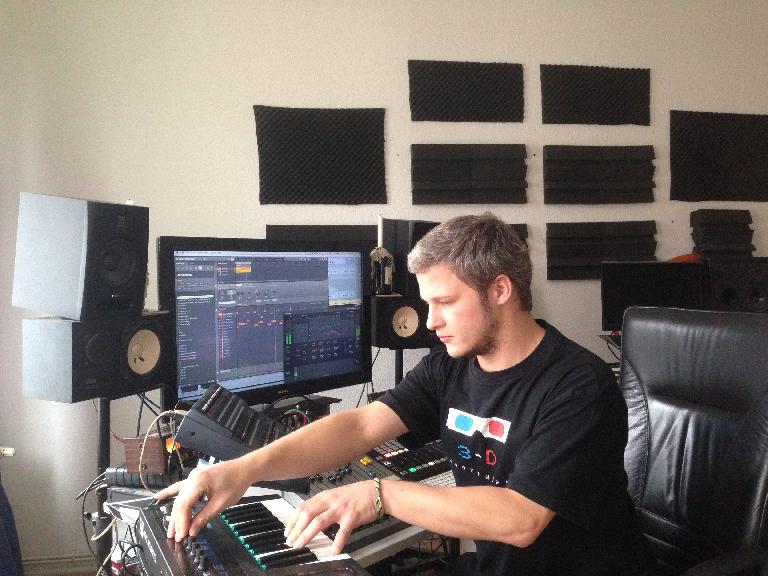 One of the things I like about it is how you can set it up for MCU to control Logic or Cubase, or anything that supports that protocol. I actually created a template of my own.

I have high hopes that there will be a community that grows up around this and that people will create maps for themselves. You should definitely share your template!

Can you tell us about any forthcoming new DAW support?

The next FL Studio release will be supported in an update to our Controller Editor. You’ll be able to select the template, then in FL Studio choose Maschine Jam as a controller and off you’ll go! There will also be support for Bitwig and it should be very similar (but even better) to the way we support Ableton Live. We’re also potentially looking at working with some guys that produce Max for Live sequencers.

Are you considering opening up the device to the hacker-style community, so people can really get into the nuts and bolts of hacking the hardware?

I don’t think that’s likely at the moment because we want to keep full control to have the option to potentially change some mechanisms in the background. It also depends on how many people are asking for it, that might influence how we think about the issue. The forums at NI are a good way to let us know what users want – I constantly talk to our support guys and we exchange information all the time. 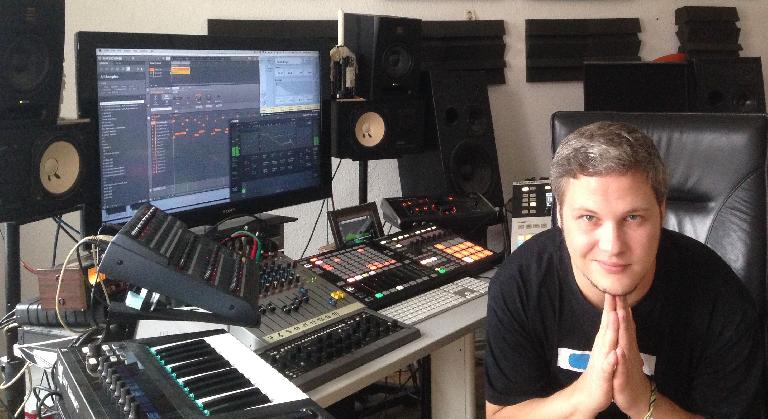 Cool! So a tricky question: what are your five favorite features of Maschine Jam?

I think my absolute favorite is morphing snapshots of lock states because it’s really cool, and something new. We’re the only ones who have it! I also love the Notes feature for strumming on the Touch Strips because I couldn’t get those results using traditional controls. Also starting with multi-sound step sequencing and then moving onto single sound step sequencing. It’s cool that you can go back and forth using different numbers of sounds. So for example you can have multiple drum elements available without having to navigate.

One that’s a bit more hidden is relative editing: for example when you’re mixing you can hold the Shift button then use the Touch Strips to change the volume in finer increments. Being able to switch into MIDI mode directly from the hardware is really crucial too, because it adds a second layer to the whole thing and makes it super versatile. I really like the concepts of randomization, humanization and adding variation. Helpers, as it were! They help you with your production and this is a direction I want to develop.

Can you tell us anything about what’s coming in future updates?

One thing that gets requested a lot is the ability to edit existing note events. We’re working on that right now: access to pitch, position, velocity and note length. Also some tweaks that didn’t make it in time for the release. One could be for example that when you create a group and set a scale, the next group you create is going to inherit the setting from the previous group which I think will be helpful.

Learn all about Maschine JAM in our video course series here.
Synthesis 101
The Filter
by Bob Moog Foundation