Language
Known as the Godfather of Controllerism, Matt Moldover, sat down with AskAudio Mag to talk about his latest projects: Four Track and the exciting collaboration with Livid Instruments, Guitar Wing.

Tell us about your musical background.

I came up playing guitar and singing in rock bands. I was introduced to serious electronic music in college and started producing and playing in live-electronic bands. A few years after I moved to New York City, I got fed up with the interpersonal difficulties that I experienced working with bands, and turned my focus to solo performance.

When did you begin to use controllers as instruments in their own right?

The first software tools from Ableton and Native Instruments were just beginning to appear when I started my solo career. It seemed like anything I imagined was possible with Reaktor and Live, but hardware was a different story. Short of spending several thousand dollars on something like a Haken Continuum, there was no electronic instrument approaching the expressiveness I had grown to appreciate from playing guitar. The resulting frustration motivated me to start hacking what hardware was readily available, and eventually building new controllers from scratch. 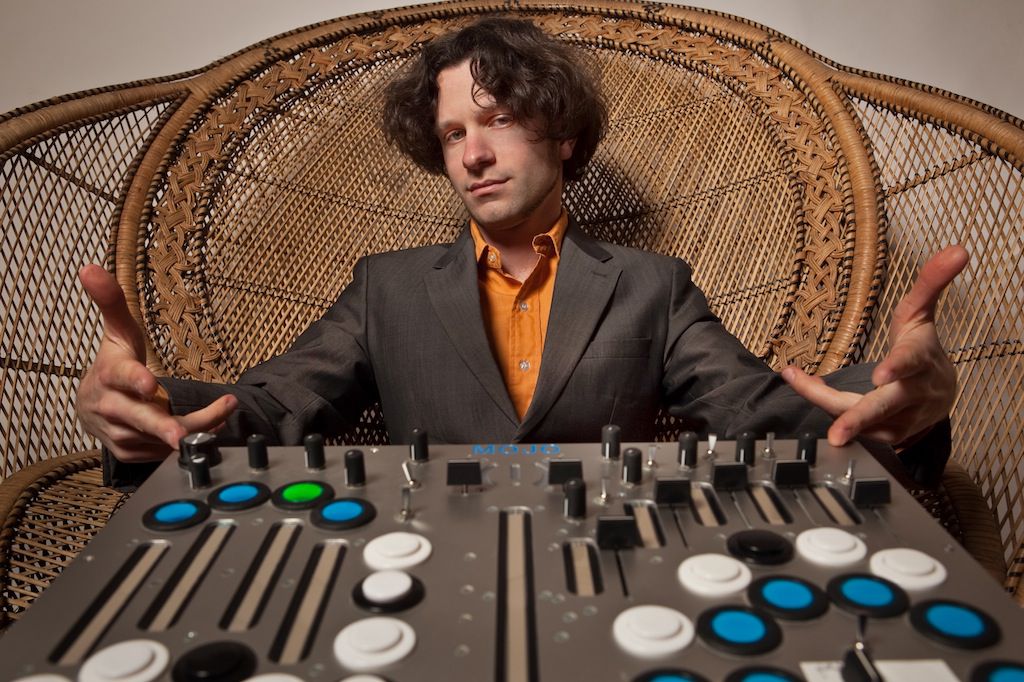 The Godfather of Controllerism.

What was your inspiration behind Four Track

Four Track is my current album project, set for release in May 2014. In 2009, I recovered a tape of the first songs I ever recorded, and it reminded me how heartfelt my music was before I got so deep into technical studies. I've spent the last four years returning to those musical roots, writing simple songs, and designing this new set of custom controllers to bring together the organic and synthetic sides of my work.

Tell us about your hardware gear.

I use three instruments to perform all my music. The Mojo is a stand-mounted console that I use to play and modify the pre-recorded parts of my songs. The Robocaster is a custom built electric guitar with an array of digital sensors that I use to control guitar effects in new ways. I'm also working on a microphone-controller for manipulating my voice. 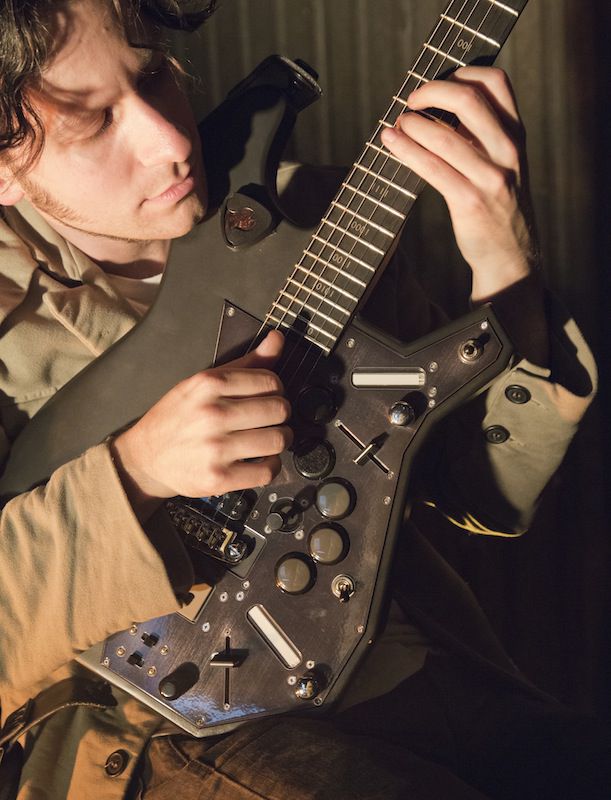 What role does software play in your productions and performances? Are you mainly an Ableton Live guy?

Ableton Live is the host I use for live performance. Within it, I use many plug-ins including Native Instruments tools for synths, samplers and guitar processing, as well as effects from Sugar Bytes, iZotope, and Antares. For production work, Cubase is my DAW of choice, and I use a lot of UAD plug-ins.

So, The Voice Crusher is really enticing! Can you tell us more about it and what it's designed to do.

The Voice Crusher is the physical packaging for the Four Track album. It is both a container for the music (on a small USB thumb drive), and a new musical instrument for mangling your voice. Everything is mounted on a circuit board designed to look like an old school cassette tape, and fits inside a regular cassette case. Much like the new music, it's a melding of tradition and innovation. 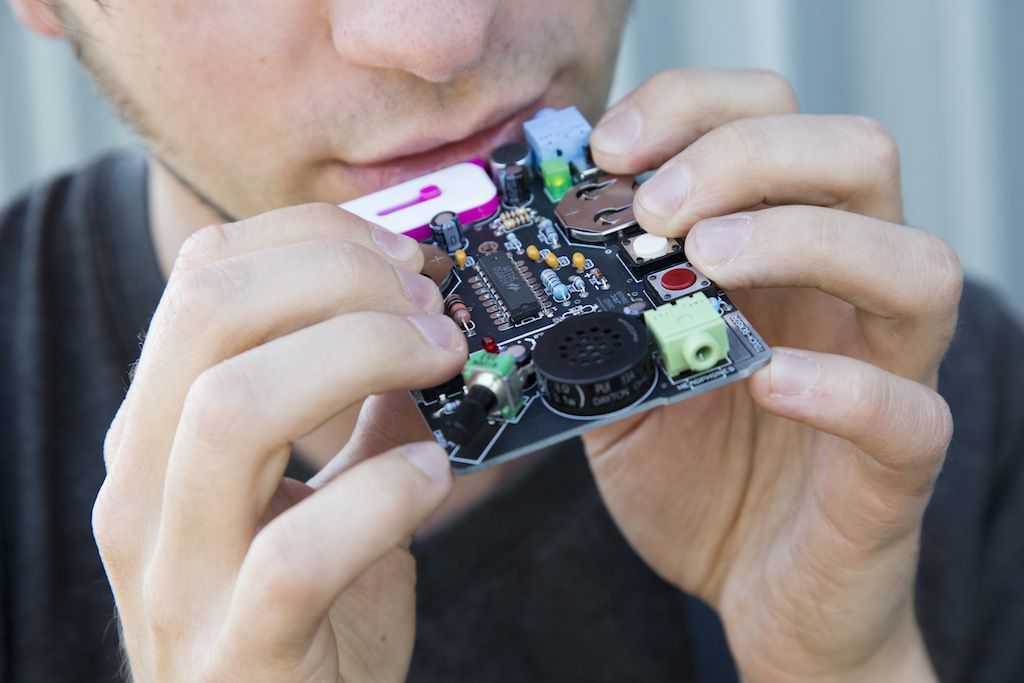 What was your process in designing The Voice Crusher?

I've always been a fan of musical albums that included more than just recordings (images, written words, inserts, etc.). The idea of printing artwork on circuit-boards came from a friend who used them to make business cards. Doing the same to create album artwork was a short jump, and adding a musical instrument seemed like the thing to do given my interests. That same friend and others from the hackerspace community helped me learn how to design and manufacture electronics. The goal is to create something truly unique, that is both a listening experience and a fun artifact that encourages immediate creativity.

Tell us why you decided to crowdfund Four Track. What have been the challenges for you in this project and how have you avoided any pitfalls?

As an independent artist, I've already been doing most of what crowdfunding is, for a long time. Now that there is a recognized name for it and popular platforms like Kickstarter, it's easier than ever to make a project happen with these methods. The biggest challenges were gathering the huge pile of supporting media, organizing my community, and keeping up the motivation to spread the word continuously for a solid month. I did so much research and planning that I think I avoided any major pitfalls, but if I could offer a lesson learned, it would be that I underestimated the importance of working with the press.

Besides recording Four Track, what else are you working on?

I've been co-designing a new controller with Livid Instruments that is just about to be launched, along with a new Kickstarter campaign. It's called Guitar Wing and it's a small wireless control surface that attaches to any electric guitar or bass. Much of its design is based on my Robocaster guitar. 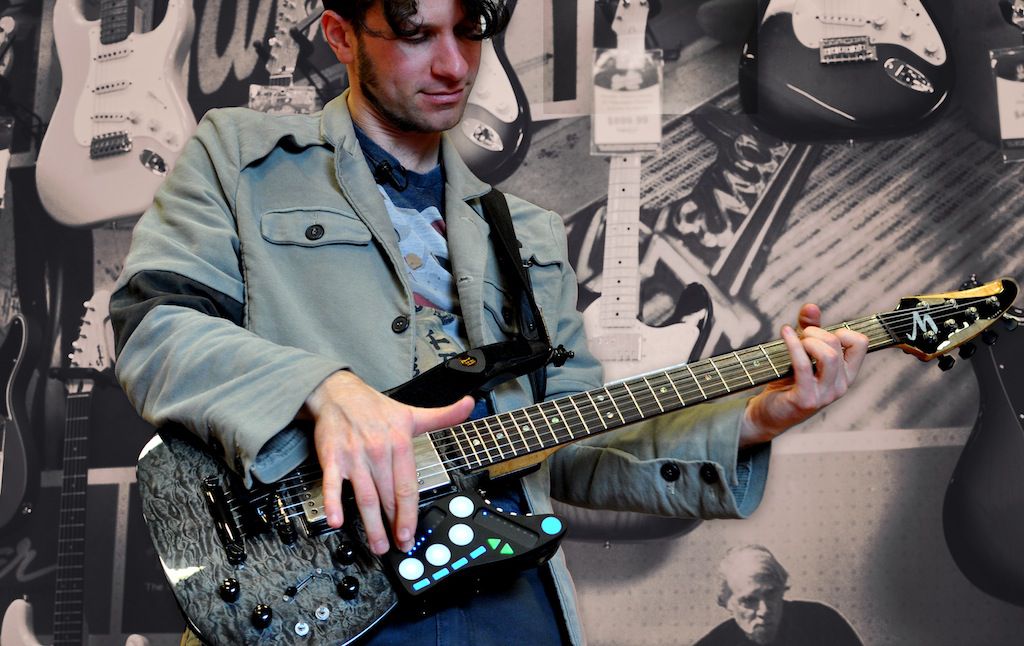 The Guitar Wing (made in collaboration with Livid Instruments) is definitely a new category of instrument… and thanks to Kickstarter, YOU can help make it a reality!

Guitar Wing sounds like a great idea! How did you and Livid come up with it?

The Wing is really defining a new category of instrument. It's happening now only because of a very fortunate set of circumstances. I've known Livid's founder Jay Smith for something like 10 years. We met up at South by South West last year and re-discovered our mutual love of guitar, and how well our current resources could benefit each other. Livid has been developing wireless and touch technologies for the last few years, and making some really innovative instruments like the Elements modular system and a signature controller for Richie Hawtin. I've made a name for myself as both a performer and an instrument designer, and have been intensely developing The Robocaster for the last few years. We've been friends for so long and our calendars, ideas, working methods, the crowd funding thing—everything kinda lined up and we decided to go for it.

How has the experience of collaborating with Livid been?

This is the first time I've worked with a company of this size, and it's great because they have a lot of resources, but they are still small enough that they can use all my talents and ideas. Up until now I've produced hand-made, professional (and expensive) instruments like The Mojo, and very inexpensive "casual instruments" like The Voice Crusher. This new collaboration with Livid is my first design that has both deep performance potential, and a modest price tag. I'm really excited at this opportunity to see my instrument ideas into the hands of a larger group of music-makers.

MPV Peter
this is an awesome interview!
grandstick
I have jumped on-board the Kickstarter campaign. The Guitar Wing could open up some really exciting possibilities. I can't wait to get my hands on one.