Language
BASE II, DS1, Guitar Wing, OHM RGB, CNTRL:R... just a few of the wonderful things to come from Livid Instruments. We sat down with CEO, Jay Smith, to talk controllers and being diagnosed with ALS.

Recently, fate smiled on me a second time, as I was able to once again darken the door of Livid Instruments and get a glimpse into the LED illuminated, plastic and aluminum world that they've built for the enjoyment of myself and so many other musicians that use their controllers.This time, I got the rare opportunity to spend some time talking one-on-one with the CEO, himself, Jay Smith. This is a particularly interesting time to catch up with him, as his company, whom he runs along with long time partners Travis Redding and Peter Nyboer, is on the tail end of an incredibly successful Kickstarter campaign, some scintillating product announcements, and some personal changes that have led to an even greater movement from within the mind of Jay Smith, himself. After the recording begins, the conversation quickly turns to the new DS1…

“We have been working for the past year to produce what is kind of like an audio mixer, but in a small box.” explains Jay. “It's like an eight channel audio mixer organized into channel strips, forty-four knobs, nine faders, and it's about the size of a record.”

My curiosity perked, I ask the next obvious question, “So, what inspired the DS1?”

“There's really nothing like it on the market. And, I have no idea why. We've had everyone from Richie Hawtin to the Scientist over the years say, 'I want a mixer but for Ableton, or for Traktor, or for Logic. But, it needs to be all MIDI, no I/O.' We've heard it over and over, and over… It's kind of the opposite of what we do. We make these devices that are… smart.  So, you can hook this device up to Ableton, with effects, and you can have all this feedback, lights blink, you can sequence. We don't make something that's simple and dumb. And, that was really the driving force behind the Ds1. Something simple, and doesn't do all that crazy feedback and sequencing. It's like I have a mixer and I use it with my computer. So, I don't need a grid of buttons that does crazy sequences like a drum machine. I just need faders, pots and buttons.”

At this point, I have to bring up another current Livid announcement. Base II has just been announced not long before this interview came about, and the current version sports some ergonomic touches not found previously. I ask if any of the same ergonomic decisions went into the DS1.

And, with this, Jay steps back in to the office to grab a Base II, another new announcement from Livid that adds brighter LEDS, a new front bar, and an upcoming firmware update that's going to add a step sequencer. He places Base II on the table. There isn't even a prototype at Livid to see of the DS1, so we use what we've got.

“The DS1 has the same layout in terms of extrusion, side panels and top plate. The top plate is not plastic, however. And, the idea here is it's almost like a mixer. You have this edge here...” He points to the new front bar that adorns Base II, which now slopes down, as opposed to the plain, blocky enclosure that the original Base sported. 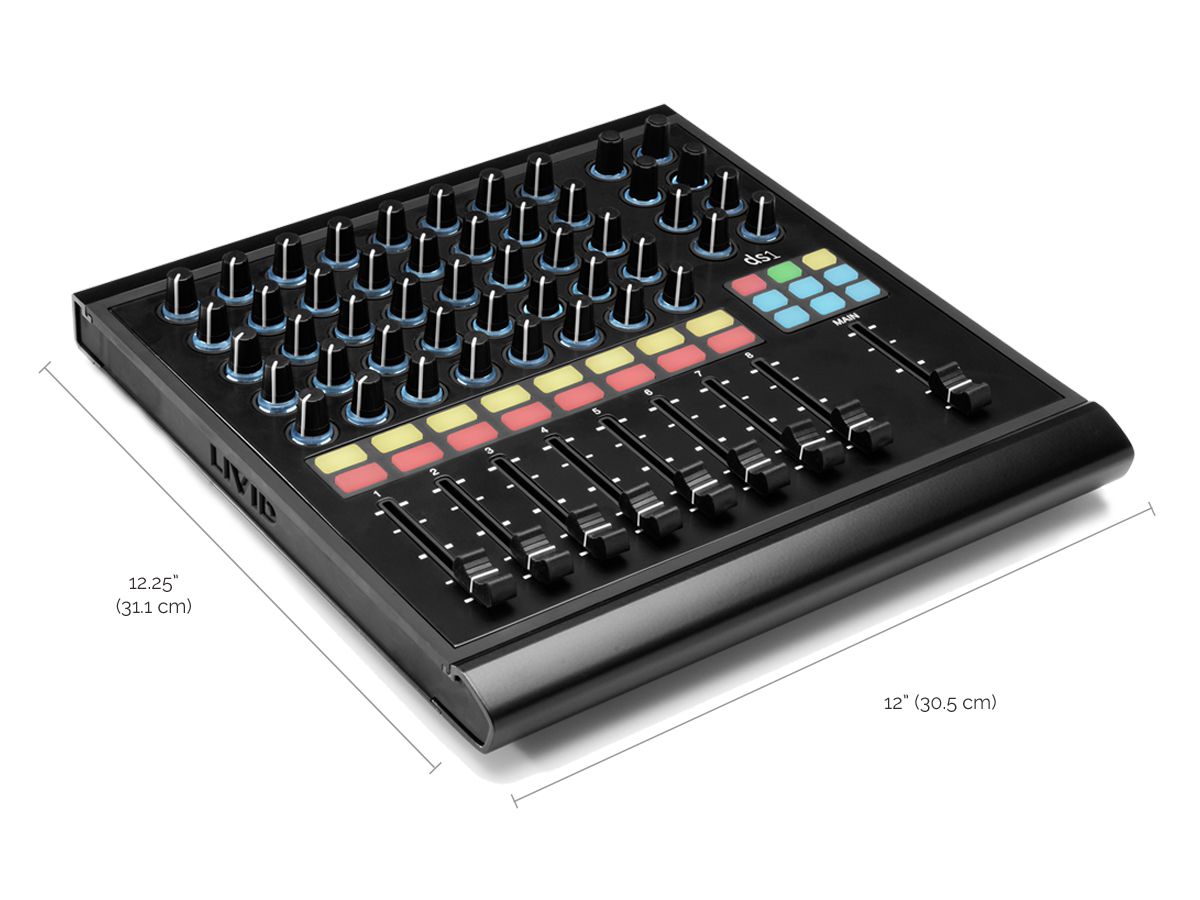 “It's like a mixing desk. With the DS1 we wanted to give you something big enough to actually put your hands on and use. But, small enough to put in a back pack.”

At this point, I get excited and have to pipe in. “So, it's kind of like the Alias 8?” If you recall, the Alias 8 was the controller that Trent Reznor was rocking on last years Nine Inch Nails tour.

He smiles, “The DS1 is the big brother to the Alias 8. But, it's even more simple to program than that. It doesn't have the multiple MIDI channels, like the Alias 8. It's even dumber. No character display. It's the dumber, more handsome, older, and slightly more ergonomic brother.”

Before moving on to some of the other announcement, I can't help but put in an additional query, “Should we be expecting a version of the DS1 with motorized faders at any point?”

Jay's eyes narrow, just a little at this point. You can tell that this is something that's been on his mind. “We've talked… It's a hefty price tag. One of the goals with the DS1 was to make it cheap enough with high-quality parts. When you add on the expense of quality motorized faders, you're looking at a price tag that's well over a thousand.”

And, with the talk of additional money added, I decide to quickly turn it back to another topic that I've been burning to ask about, Guitar Wing.

“Our first products were guitars.” And, with this statement, he points to the first Livid products that adorn the walls in the building entry. After picking one of them up, he begins again, “I was playing this guitar, and Travis was playing that one…” He points to another guitar along the wall that is embedded with buttons, pots and has a similar feel to something that you'd see in Ghostbusters. “Which was having real guitars with built-in controllers. But, we found out that we make really cool controllers, and really crappy sounding guitars.” Now, he points at Guitar Wing, “This is full circle for that whole concept. When Travis and I started this company, we both played guitars. Now, we're back to making products that we would use.”

At this point, since we're talking about Jay individually at this point, I move to a more personal announcement that's come from Livid that directly affects Jay Smith, individually. Recently, Jay Smith was diagnosed with Lou Gehrig's Disease, or ALS. This is a crippling disease that is as deadly as it is, debilitating. To this date, Stephen Hawking is the longest living survivor of ALS, and if you see the state that the disease has left him in, it's hard not to get emotional.

I muster up the courage, and ask, “In light of your recent diagnosis with ALS, has this made you rethink design, is this something that's on your mind in terms of building something for special needs, or accessibility?"

“Yes, I have. I haven't gotten that far yet. There are a lot of things here, that we do, that could really help disabled people. So, yeah, when I got diagnosed, I thought, yeah, I've gotta build something. Maybe a wheel chair accessory. There's actually a guitarist that was diagnosed years ago, and he was like a savant. And, he couldn't do this anymore…” He mimics the hand movements of playing a guitar. And, then continues, “So, he started writing with his eyes.” At this point, my mind imagination starts up. I imagine what he's talking about where someone is using a computer with retinal tracking in order to provide cursor movement within a computer, note placement. Jay just watches my wheels spin for a second as this sinks. You can tell he's being patient with me.

I exclaim, “Wow, so I'm just imagining Livid getting into retinal scanning and tracking…”

Jay just calmly continues, he's already way ahead of me, “Do you know the guys over at Liine, that do the Lemur? Well, we're friends, and when I was diagnosed I immediately thought of how technology can change life for the disabled and who I knew in the industry. It's smart guys like these who are making the real difference in how technology can help people live”. This is almost an exciting time to be diagnosed with ALS, because there is so much research and technology that is happening, which is really exciting. But, the other flip side is that it's so underfunded that the only reason that there isn't a treatment is because the doctor's don't see funding. It's super frustrating, and at the same time really exciting.”

Years ago, I worked product support for a company and had the opportunity to help a customer with Cubase who was using optical tracking to get around his computer. We were able to get him running, but I remembered the headaches that went along with where we currently are with accessibility for those of us who don't have full usage of our limbs. I relay the story to Jay, and then say, “I remember the headaches of what my customer had to go through, and I can't help but think, what would Jay do? What would Livid do? This diagnosis breaks my heart, but I can't help but wonder”

This is where you can start to see the true warrior within Jay Smith come out. A man that even in light of the diagnosis continues martial arts, continues to run a company, and continues to be a father to two lovely girls that greeted my girlfriend and photographer Pam, as we walked into Livid, and he continues to be a husband.

“It doesn't break my heart. Most people lose usage of their hands and legs first. But, not me. I'm happy about that.”

From here, he goes on to tell us, not as a victim of ALS, but as an enthusiast of martial arts, how his instructor switched him to Kali Sticks, the same type of weapons that Nightwing, in the DC comics uses. He doesn't let anything sound like a tragedy. He makes it sound like an adventure. And, when you look in his eyes, you can see it's not just talk.

In addition to Livid Instruments, Jay has also started every90minutes.org, an organization focused on raising support for the research for ALS/Lou Gehrig's Disease. If you have a moment, take a look. Jay isn't just a CEO for Livid, he's a member of our worldwide community of musicians. And, what affects him, affects us all.

Magic Fingers
Great article! I am a BASE 1 owner, and a fan of everything Livid Instruments creates. Best of luck to Jay and his future "adventures"!!!