Language
During his visit to BPM 2015, Ask.Audio's Liam O'Mullane aka The Sound Tutor caught up with highly acclaimed d&b producer Icicle to find out more about the tech behind his current live show rig.

mAsk: Could you start by telling us a little bit about your setup and how it came to be?

Icicle: For the live show I use Maschine Studio as the heart in standalone mode so there’s no DAW or anything like that being used. I use a Virus synthesizer and a big mixer to mix it all out live with Maschine sending out different audio channels like drums, percussion, bass and so on. I’ve got the NI Komplete Kontrol keyboard as well which automatically latches onto whichever instrument I’m selecting so I can play stuff over the top. There’s analogue filters, compressors and other things but basically it’s like a hardware studio kind of setup, mixing live, like techno people used to do in the '90s. It runs on a Mac mini without a screen, mouse or anything like that. I’ve programmed it so it just boots up properly and you can then just use the controller for everything to keep it hands-on and make sure nobody says ‘is he just checking his email up there?’

Ask: On the note of working in the style of techno performances in the '90s, who are your influences for how you put your rig together? I’ve seen Amon Tobin pop up a few times online when reading up about you?

eIcicle: Amon Tobin is definitely a big hero for me, but I would say for his sound-design more than anything else, the granular stuff he does or foley where he’s very innovative with sound. When it comes to shows though it’s more techno DJs like Jeff Mills who’s always been a big hero of mine. Even when he was DJing he was bringing out his 909. More recent people, like Blawan, create really nice tunes and I like his style. He just puts a bunch of machines on the stage and plays live like that. That’s what I see as ‘live’ for the type of music that I make, we’re not a full on jazz band, but that kind of jamming and working with different hardware manipulating of sounds, that’s what I see as live so that’s what I’ve tried to do with the show.

When it comes to shows though it’s more techno DJs like Jeff Mills who’s always been a big hero of mine. Even when he was DJing he was bringing out his 909.

Ask: In terms of trying to have dynamic control over your sets and maybe a little improvisation, what have you factored into your set-up to give you a bit of expression rather than just using stems and letting them roll out?

Icicle: To keep that flexibility is always hard as your tunes are made up of loads of individual elements and you need to pick out the ones you want to play with. Obviously Maschine is good for this as I can split the tunes I’m playing which weren’t made in Maschine, they were made in things like Cubase and lots of NI stuff, but this is where Maschine is great for me as I will split all my tunes out into little percussion loops and other individual elements or notes, etc. Then I’ll load them into Maschine’s sampler so I can play them up and down. I also use Absynth and FM8 a lot so I can load patches in live where and can then do anything I want with it to change it.

Then there is the structure in terms of how you’re going to run through your stuff and how you structure out your songs. So within Maschine I create 16-bar loops, sometimes shorter and in Maschine’s scene selection, I can play through or move to different sections to keep them looping until I feel like I’ve done that part and then move on. In that sense, I think that I do have a lot of flexibility as I can control how fast I run through songs with everything there, playing elements over the top and bring percussion bits in and out via the hardware mixer. There I have different reverbs on the auxiliaries so I can feed parts to them live and then I have a filter group on the mixer so I can send anything to it for filtering things in and out. 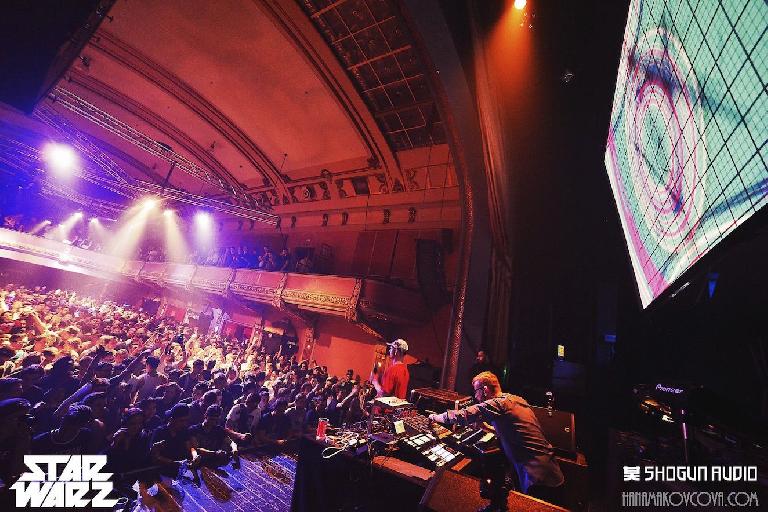 Ask: How are you dealing with the tempo in your set?

Icicle: Tempo is a bit of a problem as it would be great if Maschine could have tempo specific scenes, it currently just has a master tempo. So what I do is create little scenes with very simple bits of music, like breakdowns that can keep running. I then hold Tap and use the jog-dial to wind the tempo down till I’ve achieved the tempo switch, then I can let it all go again. This is an improvisation but it turned out to work really well as it gives me full control to move up and down in tempo. I can do this really smoothly so it doesn’t change speed in noticeable steps.

Icicle: We’re doing it via MIDI connections, we could have done it via OSC I guess or something like that but we decided to keep it simple. For visuals we use Resolume Arena which is like Ableton Live for visuals using slots [like Session View] where you can chuck in visual clips and trigger them. If I play a melody, every key on the keyboard that I use plays a specific piece of video. For instance in one song every note I play displays a different white vertical line over the other visuals playing and if I improvise the visuals follow me. Then there are specific scenes which trigger specific layers of video which took a lot of work to get it to play in parallel with what I’m doing. Then I still have a VJ who applies effects and extra stuff in the show but it all plays on the beat and follows the performance as it progresses from my MIDI output.

Ask: In respect of where you’re going in the future with the show, I interviewed Richie Hawtin a while back on his 2.0 tour which is obviously a very big rig and team on board as well. But the big turning point for him on that tour was that he said he’d got to a turning point where he can now create music at the same time as the live set-up whereas before, like you’ve mentioned, you’re porting work from existing songs in a DAW to the live set-up. Is anything happening in your own work where there’s a reverse process happening from  elements in your live set-up moving into the studio? 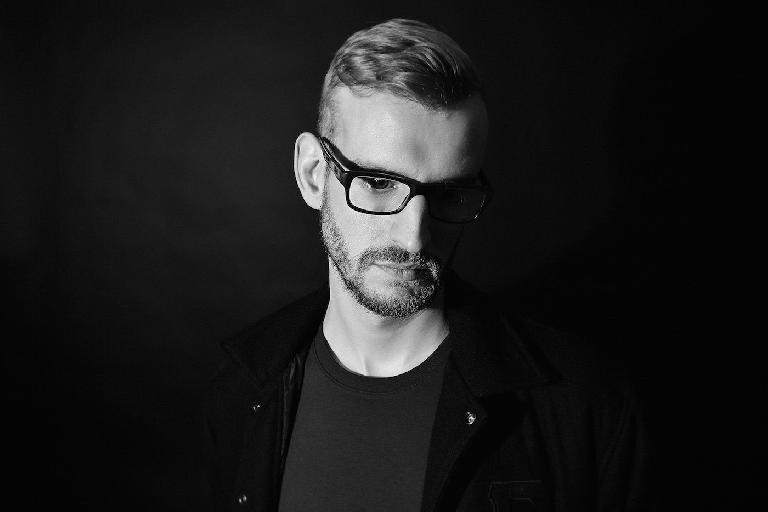 "As you’re creating music you’re also thinking of how you’re going to present it!"

Icicle:  Yes you’re mindful of that and as you learn, it becomes more and more of one thing. As you’re creating music you’re also thinking of how you’re going to present it! I’m making a lot of the visuals myself now so I’m thinking of how it will become an integrated audio/visual product which is really exciting and a good mark of our time that we now have enough processing power to be able to do all of these things. It’s all becoming one thing but it is hard to do it all and keep looking forward to how it will all work live, how I can morph and evolve bits to be fun to play with live. But I do still sometimes just sit down and try to write the music itself, but the show really feels like a step forward past turning up with a USB stick to play some tunes.

Ask: Now you’re on a version 2.0 from your original live set-up , do you have any advice for anyone wanting to create a live show with their existing tunes, or perhaps even just go straight into the idea of writing a live show?

Going live and figuring out your platform and how to be musical is one thing, but the other is to make it so people can see and understand that’s what’s happening. I think it’s important to show that you’re adding something more to your performance than if you are just DJing.

Icicle: It’s exhausting which I underestimated for this tour. You have three people and three flight cases which are a 100 plus kilos that needs to be set up and soundchecked. In terms of what platform you can choose to use you can obviously choose something like the Ableton Live route which is probably the most obvious one and you can do some sick stuff with it, but one of the bits of feedback I hear most with this is ‘what is it you’re really doing?’, you can’t expect your crowd to understand what you’re doing and what parameters you’re tweaking. That’s why my setup is fairly hands-on so you can understand what’s going on. Going live and figuring out your platform and how to be musical is one thing, but the other is to make it so people can see and understand that’s what’s happening. I think it’s important to show that you’re adding something more to your performance than if you are just DJing.

Ask: So let’s talk about some tech tips you might want to share. What’s your favorite feature of Maschine that’s given you a new way to approach what you do with music?

Icicle: That’s a difficult one, for me. Overall what makes Maschine great is the fact that it’s solid, that I can put my cool patches in there and get complicated. One thing that’s really good for live that springs to mind is the macro page where per group, per song or even on the master, you can set up effects and go through them really quickly via eight encoders where you can control say a time-stretch effect, a reverb, a delay and a filter to be really expressive. I think that’s a really smart idea where you don’t have to go through all the details and can instead be live and hands-on with it.

Ask: This final question is from a personal interest as I’ve read that you’re into using iZotope Alloy as a good way to beef up or generally work with transients when it comes to your drums. Can you explain a little bit about the mechanics of that?

Icicle: Alloy is definitely a plug-in I use a lot and it has a transient shaper which is obviously not that unique but it’s multi-band which I love to use on entire loops or a drum bus. You can set up the bands to be specific like around 180 Hz and another at say 2 kHz. Then you can beef up the transients a lot without pushing up the top frequencies, so you can get massive sounding transients without getting too much of a popping sound which seems to be the problem with normal transient shapers. This is a big part of sounding more like a modern drum & bass track whereas with other full-range transient plug-ins it can sound like it’s made in 2005, it’s definitely one of my favourite plug-ins.

Check out more of Icicle at:

"Also known as The Scratch Technician for his DJ and music production work. TST's main focus has always been on being the best at what he does while retaining a strong sense of uniqueness to his work. He's played on BBC's 1Xtra radio station three times, won many DJ competitions and has been producing various genres of electronic music ..." Read More