Interview: Blipblox - The Toy Synth That Appeals To Kids & Adults

Blipblox is a cool new synth that's aimed at kids but has way more depth to it than you might imagine. So much so that parents might find themselves getting in on the act too...

Playtime Engineering's BlipBlox  is a very interesting product that we have talked about before. This synth that debuted at NAMM 2018 certainly packs a punch in terms of spec despite its toylike appearance. You can connect a MIDI keyboard to control it, there's eight unique oscillator modulation schemes, a low pass filter, two envelope generators, two LFOs and much more besides. We caught up with its developer, Troy Sheets, to ask him what Blipblox is all about.

AskAudio: How did you conceive of Blipblox? Where did the genesis of the idea of a toy-like synthesizer come from?

Troy Sheets: I’ve been into music for a long time. I was lucky enough to have access to some fun music equipment as a teenager, like a DX-100, a 4-track tape recorder and a little drum machine. At the time it was unique, especially for someone my age. By the time I was in my early 20s I got into analog synthesis and then modular synths. I’ve always enjoyed the music production and sound design part of it.

For a while I’ve had an idea kicking around of doing a toy synthesizer. Basically, I’ve always enjoyed just playing around with synths. You don’t even have to be making music with it. Just get in there with the knobs and the switches and play with the different parameters. I’ve always found it to be a lot of fun. Once I got into modular synthesis I enjoyed how far you could push certain modulations and find these fun sounds right inbetween tone and noise.

Based on that enjoyment of using synths I had this idea of distilling the most fun parts of synthesis into a child-friendly device. About four years I got really serious about it and dived into the low-cost processors I could use and started to write the software. I basically tried to see how much sound I could get out of a low-cost processor. It’s what I needed to do to see if I could make a toy synth that would fit in the toy-bracket price range.

AA: Did this more serious exploration coincide with you having kids yourself?

TS: No. I actually don’t have kids. I am a kid at heart though. I felt confident that kids would enjoy it though.

AA: I’ve seen a number of children have tested out Blipblox. What’s been their reaction?

TS: It’s been good. We got BETA test units to a bunch of people and to kids and their parents. We’ve gotten good feedback as far as some of the sounds. Some of the sounds I liked were a little more aggressive than the sounds some of the kids liked. So I have adjusted some of the oscillator models to mellow out the sound a little and make it more fun and kid-friendly.

But I had all these other sounds I didn’t want to just throw away, so I was able to put a "secret" initialisation mode. So the crazier, original sounds will be accessible also when Blipblox begins shipping. I’m happy to have that compromise. 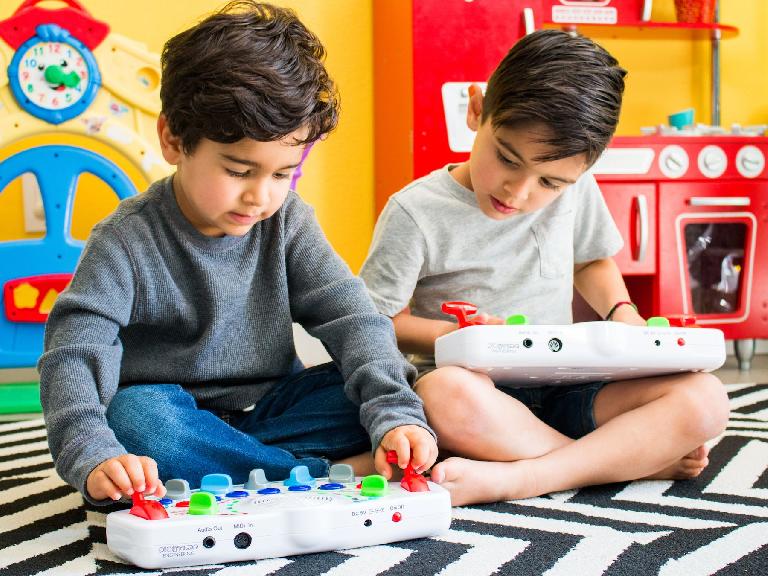 TS: The real heart of the sound of the Blipblox is the eight different oscillator models. What’s common between each oscillator is they all have two modulation inputs. You can see the two blue lines that push into the center oscillator select button. So you can choose any of the three modulation sources (two LFOs and one modulation envelope generator). This keeps Blipblox relatively simple so you’re not selecting specific things like hard sync, PWM or detune. Those are all built in to the eight modulation schemes.

Some of these modulation schemes are non-traditional. For example, in one of the schemes, one modulation applies a scaled pitch. So, the LFO is creating a type of arpeggiator. 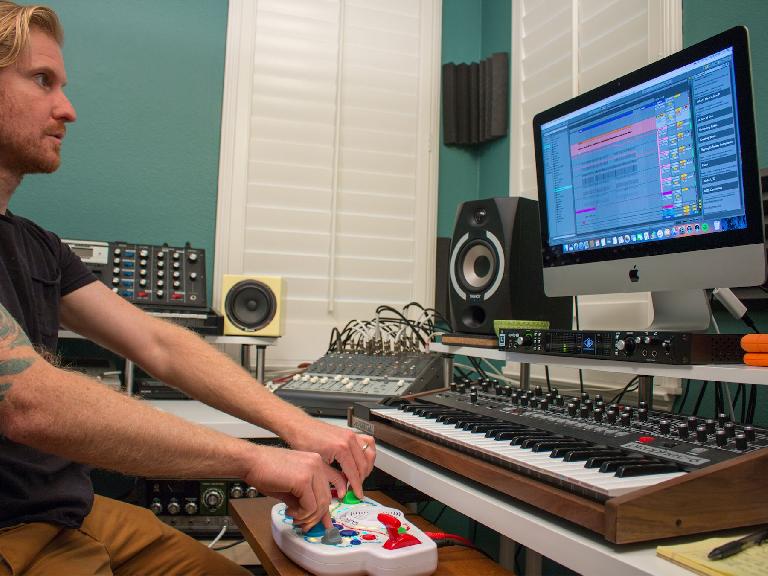 AA: Did you consider adding a keyboard to Blipblox or did you feel that would make it too complex for children?

TS: Yes, yes. This is one of the few musical toys that does not feature a keyboard. The idea there was to put the focus on the sculpting and modulation of the sounds and not the playing of the individual notes. There are hundreds of products out there where you hit a keyboard to create tones or sounds. I really wanted to differentiate Blipblox and make it about having fun exploring sounds not so much playing notes.

The internal sequencer includes hundreds of built-in melodies. The Blipblox does the job of playing of playing the notes for you so you can focus on sculpting the sounds.

AA: I notice that pressing the Sequence select button chooses a random sequence. Did you want Blipblox to enable exploration over recall of the same patterns over again?

TS: Blipblox isn’t really focused on making your own sequences or playing your own notes. However, it does have a MIDI input so you can connect an external MIDI keyboard or sequencer.  I really wanted it to be that when you turn it on the Blipblox plays the notes for you and you just focus on exploring the sounds.

There are a number of modes you can access to turn off the sequencer completely so you can play Blipblox from an external keyboard. Another cool mode is to turn off the sequencer but allow the drum sounds to play. There’s the ability to freeze a sequence, there’s drum edit mode so you can edit the pitch and duration of the drum sounds. So, not every kid is going to dive into this right away. But I wanted it to be fun for kids and adults which is why the special modes are there. 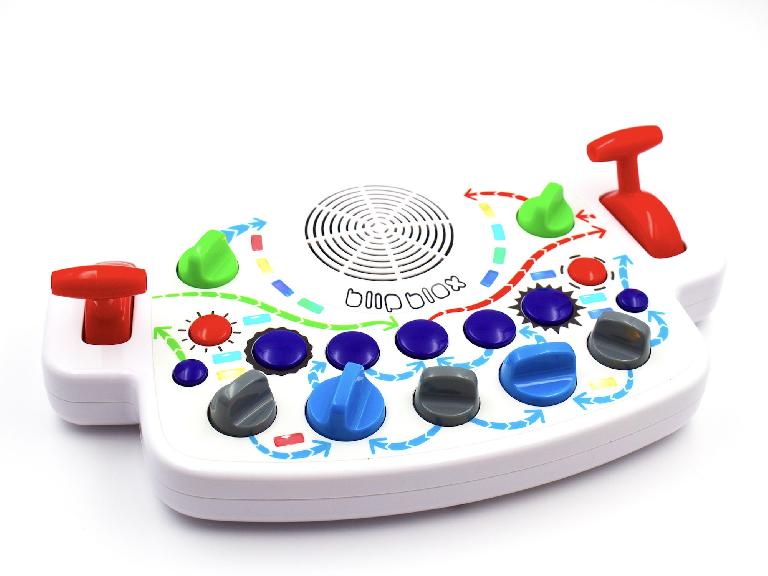 AA: Yes! I was surprised how big the Blipblox manual is. I wasn’t expecting it to be so fully featured.

TS: You can turn it on and just play. But the hope is there will be kids who, as they use it more, will want to learn more about it and maybe want to show off to their friends the control they have over it. Eventually the goal is for them to use it as a music production tool.

AA: Or perhaps their parents might be exploring it more?

TS: Or perhaps! Blipblox is a little bit of a schizophrenic product. That part of the fun we’ve had with it. It’s clearly made to be a toy, or is it? Is it a toy with some synthesizer functionality, or is it a synthesizer designed as a toy? I really enjoy people not being completely sure what it is.

AA: And did that influence you not to put extensive text labels on the controls?

TS: We spent a lot of time thinking about that. It was one of the most thought through design aspects of Blipblox. We experimented with a lot of different labeling schemes. With the large size of the knobs and buttons there’s not a lot of space to add labels. We finally decided that we would leave it a little bit cryptic and alien looking, because exploring it is part of the fun. 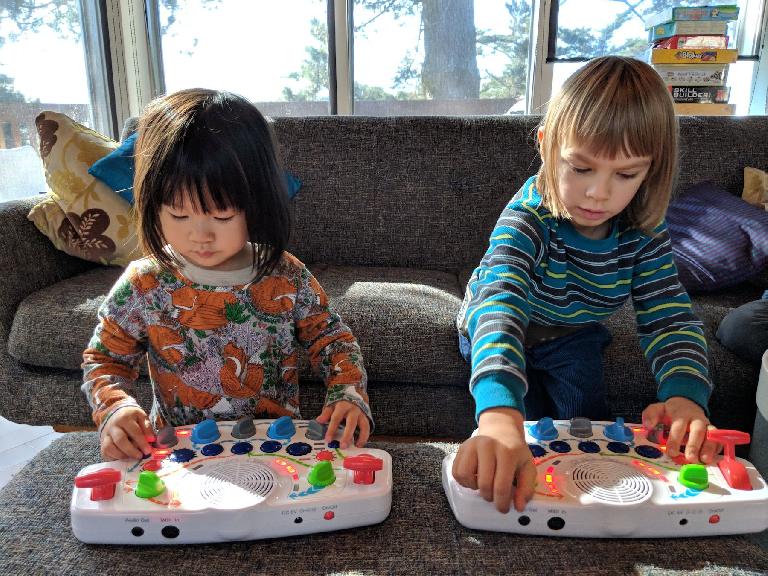 AA: It’s such a fun, immediate and yet quite a deep synthesizer. Now you’ve smashed the IndieGoGo goal, I understand you’ll want to fulfil those pledges first. What’s next in terms of distribution?

TS: Our number one goal is get these out to our early supporters. We spent a lot of time finishing up safety compliance.  An electronic product built for children has an extremely complicated and rigorous  safety testing requirement, and we are happy to be finished and fully certified.

After our first supporters start receiving their units we’ll start looking at direct sales and then we’ll explore all our options for distribution.

AA: Are you tempted to think about future products? Maybe a modular synthesizer for kids?

TS: I can’t wait to jump into a new product. There’s so many ideas and we have so much feedback. Not only that, the chips available now are more powerful and inexpensive. When I started this 3-4 years ago we went with a certain chip technology which was good at the time, but when I look at what is available now and how affordable they are I can’t wait to start working on new products. I have some ideas for higher end Blipbloxes, targeted to an older audience and a similar type of product targeted to a younger audience too.

AA: I’m pretty sure there will be lots of producers and musicians that will love to incorporate Blipbox into their setups.

TS: Yes, from our first build we’re going to keep back around 100 or so Blipblox units that we want to get out there to musicians and influencers to see what they do.

One of the things we’ve noticed is the target range of the kids using Blipblox right now is in the 2-5 year old age range and they’re really having fun with it. That makes sense. I am hoping more teenagers and young adults start to play with it. It’s a fun challenge to try and get the Blipblox into a higher age range.