In-Depth Review: Arturia iSpark - Much More Than A Beatbox

Language
Arturia's Spark for desktop computers was a big hit, so how does iSpark for iPad fare? We got fully hands-onbefore release and gave it an in-depth spin. Watch the video and read the review below.

Arturia has moved far beyond its early days producing software recreations of classic synths and now has a substantial lineup of unique software and hardware products to its name as well. Spark is the drum series and includes both desktop software and advanced hardware units and these are now joined by iSpark, an iPad-based version of the drum and beats production tool. In yet another demonstration of how seriously developers are taking the iPad as a platform, it’s a highly competent and powerful app and as such you’ll need an iPad Air, iPad mini 2 or higher to run it. That’s down to those being the earliest devices with 64-bit CPUs.

The look and layout of iSpark is very similar to the desktop version though it leaves out some stuff like the modular section, probably because of power requirements. Nonetheless it’s remarkably fully featured. There are five main sections of which the first is the “Main” screen from where you control a lot of the performance. Initially you’ll fire up one of the presets and play about with the multiple banks of patterns that come with each one and are accessed using the row of controls along the bottom. You can also switch to viewing larger pads, a step input mode and a tuning selector for any of the drum or synth sounds that make up a kit. 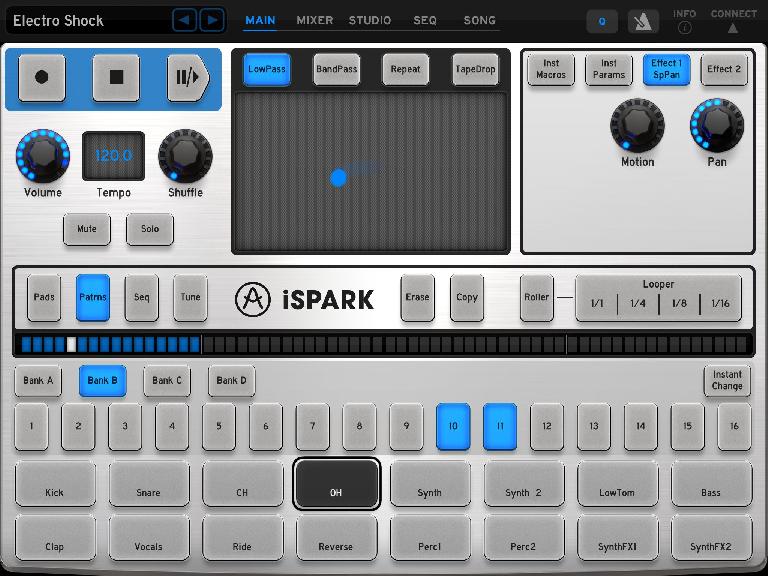 Get things rolling from the main interface section.

Sounds are sample-based and there’s some analogue modeling going on as well. Samples can be edited in Studio view, where you get to alter all kinds of parameters including switching out samples for new ones and layering up to six samples per pad and changing layer mode to change triggering by velocity, random selection and more. You can use your own samples and there’s tagging support as well as a well-designed browser. 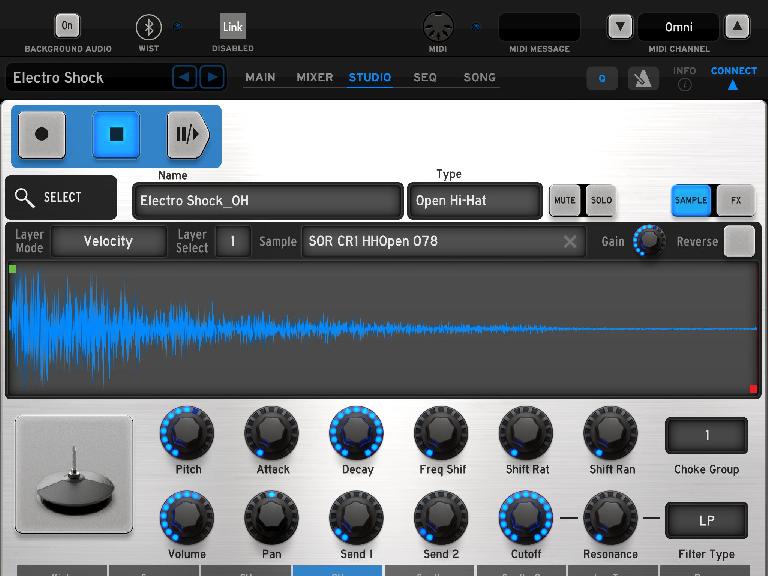 Sample editing, with the Connect controls seen along the top.

Jumping back into the Main screen there are some cool performance controls to be found, including a looper/roller section that lets you create stutter and release effects with simple taps, and an X/Y pad that allows you to draw in quick bursts of effect including filtering, repeat and a very enjoyable tape drop with multiple speed options. At the top right you’ll find four sound sections each with six rotary controls: instrument macros, instrument parameters and two effect slots with a choice of 18 different effects that can be dialed in, each with its own controls.

Sounds are sample-based, can be edited in Studio view... you can switch out samples for new ones and layer up to six samples per pad.

The Sequencer section provides an easy-to-follow expanded view of any sequence with each of the 16 sounds shown on its own row. It’s a good way to see and edit any pattern and there’s automation available for each sound as well. Enter the Automation view and there are tons of parameters available per sound ranging from simple stuff like velocity, volume and pitch to up to ten parameters per effect active in a slot. Draw in automation with your finger or use line or pen tools, or special tools to raise or lower all automation at once. It’s really well implemented and perfectly suited to the touch-based interface of the iPad. Adding bits of automation to sounds within a pattern quickly makes things much more dynamic and interesting so it’s well worth investigating. 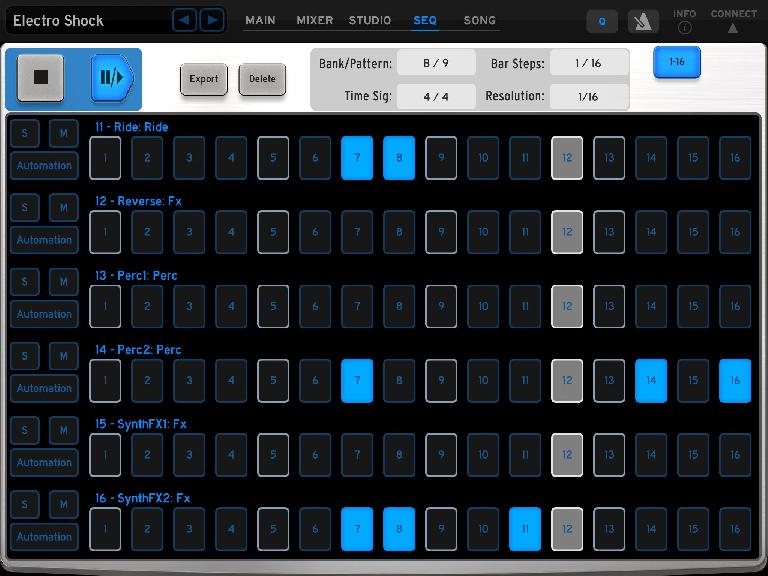 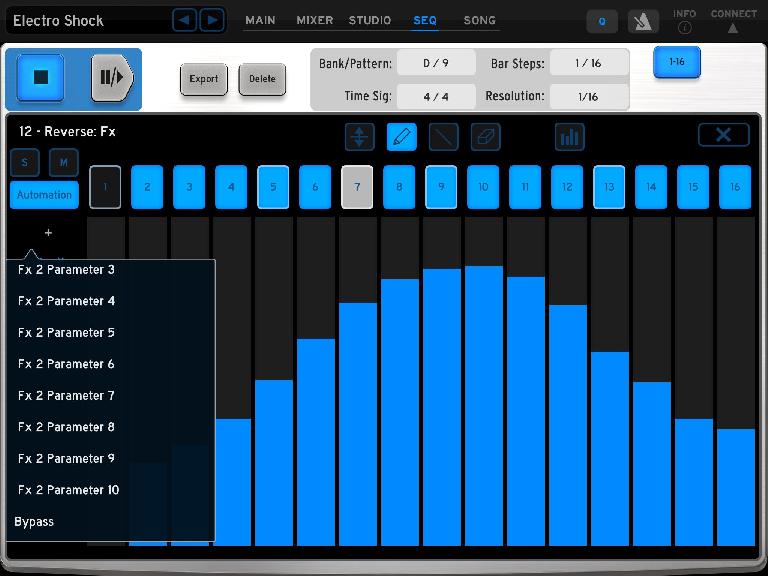 Automate many parameters with the touch interface.

The Mixer section is fairly self-explanatory with straightforward mixing controls and two FX slots for each channel as well as two FX returns and a master channel also with FX slots where you might typically strap a compressor or limiter. Every effect slot in iSpark has a preset selector which is helpful as it means you can quickly dial in or save your own settings. The effects like the bundled sounds are very cool and sound cutting edge, heavy and authentic.

Care has been taken too with the Song section where you get to drag and drop patterns into song chains, an approach which is friendlier than many I’ve come across in this type of app. As well as building songs in this way you can also flip over to the Perform section, where it’s possible to play back a song while at the same time accessing large versions of the performance controls: namely the X/Y pad and the grid of repeat, tape drop, reverse and strobe stutter effects. This makes iSpark a surprisingly flexible performance instrument as well as a compositional one. Build your patterns and songs in advance, rearrange them on the fly if you like and DJ with them from the Perform screen. 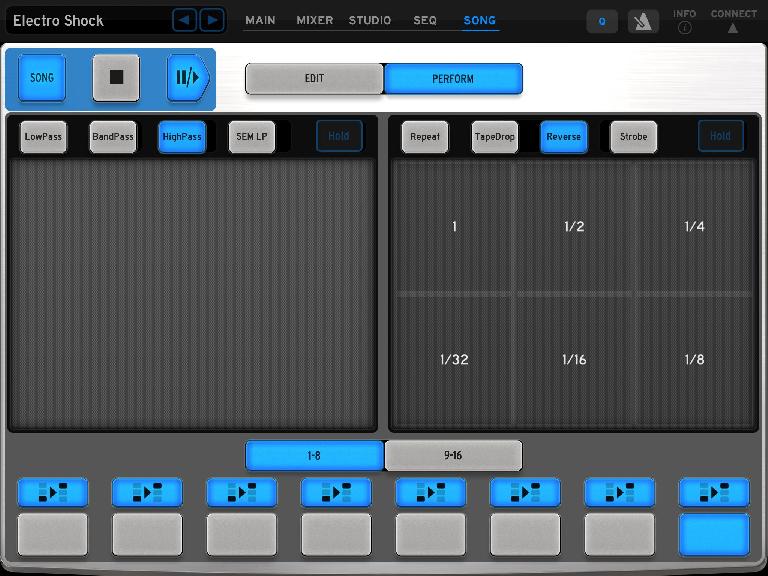 Use iSpark as a DJ tool as well as for composition.

iSpark caters well for those who want to go beyond the app itself. It’s compatible with the SparkLE hardware controller and tapping the Connect button reveals a bunch of I/O options including WIST over Bluetooth, the brand-new Ableton Link protocol, and MIDI I/O with configurable channels. It’s also compatible with AudioBus and Inter-App Audio protocols and can export patterns to audio to paste inside the iPad or to export via iTunes. Arturia says that iSpark and Spark 2 can freely exchange data so it will be possible to work on both. There doesn’t seem to be an iCloud sharing option at this time but presumably this is something that could be added in an update. Arturia says you can install the Dropbox app and share sounds to it in order to upload them.

For an app with a lot of depth to it, iSpark remains very approachable and easy to learn and use.

iSpark is a remarkably accomplished app, doubly so considering that it’s running on iPad. It’s much more than just a beatbox, and has plenty of FX slots, automation and sound shaping options as well as excellent performance controls making it tremendously creative in the studio, on the move and even on stage. You will need a relatively recent iPad to run it but it ran perfectly on my Air, technically the oldest device supported at around two and a half years.

It’s much more than just a beatbox, and has plenty of FX slots, automation and sound shaping options.

Crucially for an app with a lot of depth to it, it remains very approachable and easy to learn and use. Even beginners should find their way around fairly quickly and advanced users will be banging out heavy beats in no time. Even if you don’t hook up a MIDI controller this is still an excellent beat making app with some up-to-the-minute new technology like Ableton Link that helps you incorporate it into your wider music setup.

Pros: Very well thought-out. Sounds excellent. Plenty of effect slots and tweakability. Comprehensive but easy to use automation features. Pattern and song building is approachable. Great compatibility with desktop version. Ableton Link for expandability. Intuitive and fun to use.

Cons: No iCloud sharing export options built in. Needs a relatively recent iPad. Not yet possible to export whole songs as audio.