Impact Soundworks have gone chiptune on us with their latest Kontakt instrument, Super Audio Cart PC, sampled for some vintage game consoles and machines featuring over 1,100 samples.

Impact Soundworks has previously given a selection of legendary sounds from classic video game consoles and handheld systems the sampling treatment with SUPER AUDIO CART, yet only sampled a single (Commodore 64) personal computer in the process — despite the fact that millions of people have been using computers to play games since the Seventies. So, as implied by its RETRO PC SAMPLES subtitling, SUPER AUDIO CART PC sees the company working with OverClocked ReMix — a video game music community with tons of fan-made remixes and information on video game music — to turn their collective talents to capturing over 1,100 sounds from eight classic computer sound chips. Why? Well, the goal with this project — even more so than with SUPER AUDIO CART — is just as much about preservation of the classic sounds involved. Indeed, computer systems from decades past are notoriously unreliable, making it almost impossible to integrate them into a modern music production setup. SUPER AUDIO CART PC, however, allows access to all those classic sounds in AAX, AU, and VST formats as a powerful four-layer synth and modulation engine — just like with the original SUPER AUDIO CART. The stories behind those classic-sounding computer chips make for fascinating reading, really helping to put SUPER AUDIO CART PC into its rightful context from both a preservation perspective and auditory analysis. Alphabetically, then, there is so much more to SUPER AUDIO CART PC than first meets the ear...

Released in 1979, the 400/800 series was Atari’s early line of 8-bit home computers. With a then-blazing 1.79 MHz CPU, its primary competitor was the Commodore 64, and it became a bestselling computer of the 8-bit era. Powering its sound capabilities was the Pokey sound chip, sampled by Impact Soundworks, and offering a thick sound, characterised by a detuning of individual sound channels in the system, as well as having multiple forms of distortion available for processing.

Adlib was one of the first standards for the digital music scene. The Canadian sound card is powered by Yamaha’s YM3812 sound chip, which used FM (Frequency Modulation) synthesis to produce multitimbral instruments and sound effects. After the King’s Quest VI game broke the card out of obscurity with highly-praised music and sound effects, it gained popularity due to its versatility and ease of use, finding its way into most retail stores by 1990. 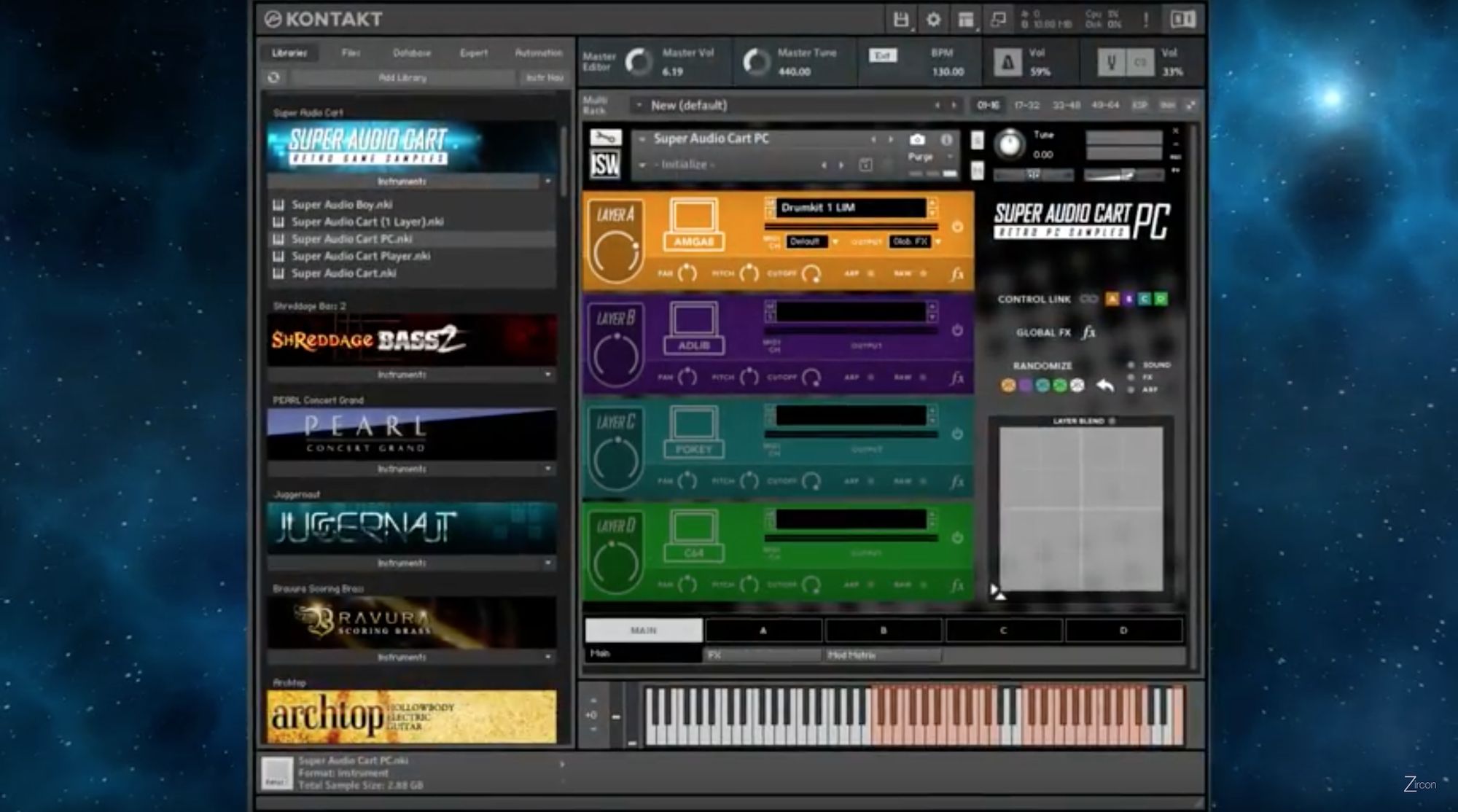 The Aegis Sonix software synth for the Commodore Amiga was a one-time cutting-edge digital replication of a hardware synth with various capabilities that were fairly new for the time. It sports one oscillator and one LFO (Low Frequency Oscillator), offering users an ability to draw custom oscillator and LFO waveforms, alongside an adjustable ADSR (Attack, Decay, Sustain, Release) envelope and lowpass filter, and an ability to add 2nd and 3rd order harmonics to those waveforms, with gritty phase distortion also on offer.

The spiritual successor to the Commodore 64, the Amiga 500 was released in 1987. Although it was popular with hobbyists due to its low price tag, it was most commonly used for gaming, with high-end graphics and audio capabilities for its time. It was eventually discontinued in 1992, replaced by the Amiga 600 and 1200, but neither product proved as popular as the 500 as the market shifted away from typical home computer models. The Amiga 500 itself uses the OSC (Original Chip Set) that was found in many late-Eighties Amiga models, using four hardware-mixed channels of 8-bit PCM (Pulse Code Modulation) audio, up to a sample rate of 28 kHz. It also shipped with a software-controllable lowpass filter.

The Commodore 64 was one of the most widely-used computers of the Eighties — the most popular single computer model ever released, in fact. The C64 was especially ubiquitous in Europe, with a huge range of games and other software available. Audio-wise, it is driven by the famous MOS 6581 SID chip, capable of a wide range of tones. Three independent oscillators, four waveforms, volume envelopes, ring modulation, oscillator sync, and a multimode filter meant that it was blessed with many capabilities not even found in dedicated synthesizers of comparable price at the time.

As the starting point of many successful Eastern video game franchises, such as Metal Gear and Bomberman, Microsoft’s MSX was very popular in Japan as well as Europe, but never gained much traction in North America. Saying that, the sound chip in the MSX is the AY-3-8910, a three-voice PSG (Programmable Sound Generator) developed in 1978 by General Instrument that produced square wave tones. It is commonly used in various arcade games, gaming consoles, and a plethora of home computers, including the MSX. The PSG generates base frequencies of up to 125 kHz, enabling high resolution and pitch accuracy not found on many sound chips of the era. The MSX could accommodate additional sound chips via expansion cartridges, such as the MSX-Audio (Y8950) and MSX-Music (YM2413) chips, offering traditional FM synthesis timbres. These were also sampled for the SUPER AUDIO CART PC project.

A custom collaboration between Komani and Yamaha, the SCC (Sound Creative Chip) is a wavetable sound chip with 128 bytes of wave samples. It was used to expand the capabilities of the MSX, which only generated square waves, as the wave samples in the SCC could be used to build much more complex waveforms than anything the PSG could accomplish.

A late-Eighties Amiga tracker — which was the first platform for which trackers were developed — was also sampled by the intrepid Impact Soundworks team. The term was coined by the first tracker program, Ultimate Soundtracker, featuring a number-based interface that allows the user to program audio playback by entering codes into specific parts of a grid of time slots. Step sequenced audio sampling software only otherwise existed on the second-mortgage-inducing Fairlight CMI (Computer Musical Instrument) workstation at that time. Those early trackers featured four pitch- and volume-modulated channels of 8-bit PCM samples, using the 8SVX (8-bit Sampled Voice) format.

Developed by Hiroki Nakayama in 1995, WinGROOVE was a PC application that enabled higher-quality playback of MIDI files. It came complete with its own set of WAV samples, rather than using synthesis, and although the software has not been officially distributed for a long time — nor is it supported by modern versions of Windows, Impact Soundworks worked with its creator to retrieve the source files and loop data to provide an authentic sound set in SUPER AUDIO CART PC!

Put it this way: with access to such classic-sounding computer chips and software developers, SUPER AUDIO CART PC faithfully reproduces a wide range of tones, and all such sounds can be used ‘dry’ to create authentic chiptune music or layered in Impact Soundworks’ powerful four-part synth engine for endless tweaking, inspiration, and sound design! Do what you will with them, though the company kindly created a bank of 150-plus modern and reimagined sounds to help jumpstart creativity, as well as including five custom FX (EQ, COMPRESSOR, BITCRUSHER, SCREAM, and DELAY) racks — one for each layer, and one for the global insert bus — and even throw the standalone SNESVerb (AU/VST) plug-in into the fully NKS (NATIVE KONTROL STANDARD) supporting musical mix... for free!

SUPER AUDIO CART PC can be purchased and digitally downloaded (as an authentic-sounding library totalling 8,000-plus samples) directly from Impact Soundworks for $99.00 USD from here: https://impactsoundworks.com/product/super-audio-cart-pc/#purchase (Owners of SUPER AUDIO CART can crossgrade for $79.00 USD.)