Language
You can now inject that legendary high-gain Boogie magic into your playing with the AmpliTube MESA/Boogie app for iPhone & iPad - the official mobile MESA/Boogie tone studio collection of MESA amps.

February 18, 2016 - IK Multimedia is proud to debut the release of AmpliTube® MESA/Boogie® for iPhone and iPad. Based on the popular desktop tone software, the AmpliTube MESA/Boogie app is a close collaboration between IK Multimedia and the R&D Team at Mesa Engineering that lets musicians process their guitar or bass tone with some of the boutique manufacturer's most iconic amplifiers and cabinets.

AmpliTube MESA/Boogie gives guitarists, producers, engineers and more the power to play through models of some of MESA/Boogie's most famous genre-defining amplifiers and cabinets. These exciting co-developed models deliver everything from the gorgeous clean sounds, percussive aggression and tight crunch of the Dual Rectifier and Triple Rectifier to the violin-like sustain of the MARK III and MARK IV to the ultra-flexible mid-gain British leanings of the TransAtlantic TA-30.

Like all AmpliTube virtual gear, these models have been carefully crafted to sound, look and perform as close to their hardware counterparts as possible. Each model has been examined and approved by the R&D Team at Mesa Engineering. In addition to the MESA/Boogie gear, AmpliTube MESA/Boogie also comes with 6 versatile stompboxes that let guitar and bass players build and play with their dream MESA/Boogie tone rig anytime and anywhere. AmpliTube MESA/Boogie also offers players a complete lineup of extreme mobile usefulness: there's a built-in single track recorder that's expandable up to 8 tracks with full waveform editing, a built-in drummer, an optional 4-track looper, a tuner, metronome, preset browsing system and more. 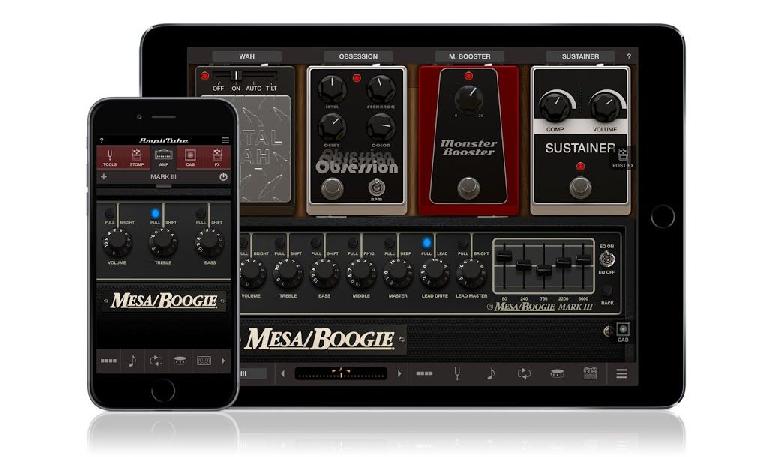 The amplifiers and cabinets available in AmpliTube MESA/Boogie include:

MESA/Boogie Dual and Triple Rectifier: THE standard for modern high-gain heavy guitar tone. The Rectifier amps are aggressive amplifiers for aggressive players. Effectively two different power section versions of the same amp introduced in 1991, these amps deliver maximum tone flexibility and serious rock attitude. Both have played a major role in defining the sound of grunge, metal and countless other forms of hard and heavy music. Each amp offers 3-channel, 8-mode operation and varying levels of tube saturation, plus a switchable virtual tube/solid state rectifier section. Soul, personality and feel: The Rectifiers provide a tremendous range of sounds that can be everything from crushingly percussive to liquid and elastic. These amps provide a high-gain response that can't be found anywhere else.

MESA/Boogie Mark III: This amp from 1984 is the first original 3-channel "Tri-Modal Amplifier" design. It features an amazing set of sonic sculpting tools via its original three-channel setup: Rhythm, a distinct midrange "Crunch" Rhythm and a Lead channel with independent gain and master volume controls. And, just like on the hardware amp it's based on, it features a full spread of tone controls as well as the vitally important Boogie 5-band Graphic EQ section. When combined, it provides for a huge range of additional tone tweaking options that make it easy for players to easily recreate the sounds they hear in their heads.

MESA/Boogie Mark IV: An improvement on a classic, this amp from 1989 takes everything that made the Mark III the standard for Boogie tone in that era and makes it even better. Three big sounds with individual controls define the tonal palette for this powerhouse of a unit. Its three channels allow it to deliver an incredibly wide sonic array that stretches from sparkling clean tones to ultra high-gain lead sounds that are rich with harmonics and sustain. It's the very definition of MESA/Boogie's signature high-gain sound. 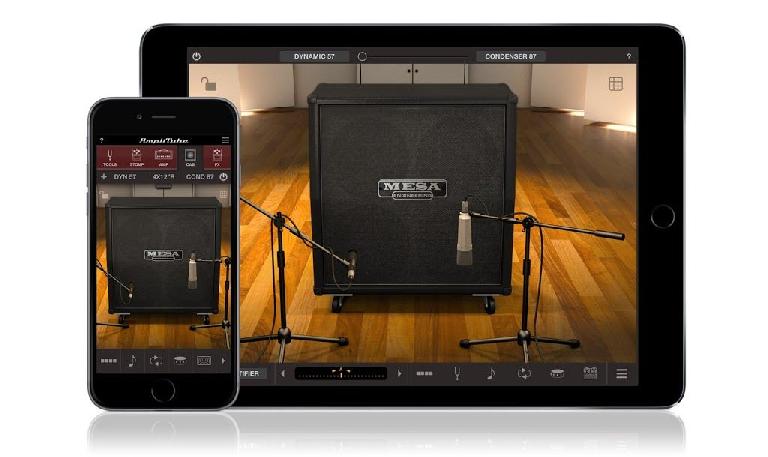 MESA/Boogie TransAtlantic TA-30: A decidedly British MESA/Boogie tribute. This model captures the essence of what, for MESA, was an exercise in simplicity of operation and comprehensive tonal control. It features two-channel operation and 5 distinct "Mode" voicing choices that reference several classic British and American circuits. Throw in the Gain Boost feature and two high-gain options (HI 1 and HI 2 in Channel 2), and this model covers everything from classic '60s to crushing contemporary. Each channel also features the flexibility of 3 levels of output power. This allows for a full range of power response and character that adds yet another level of accuracy and authenticity to its preamp sounds! This amp may be the most versatile yet simple-to-use MESA amplifier ever made, and it covers anything and everything the other models might miss due to their higher power ranges and gain structures.

In addition to these extremely popular and powerful amplifier/cabinet combos, AmpliTube MESA/Boogie also comes with 6 stomps. Made by the team at IK, these stomps compliment the creativity of the name-brand gear. There's a Noise Filter for gating unwanted sound between riffs. There's a Metal Wah that's tailor made for adding colour to those righteous metal solos. There's a Sustainer that punches up solos and allows for unreal note sustain. Obsession is a delay pedal with EQ control. Surfer is a shimmering flanger that can be used to add different modulation flavors to regular playing and soloing. And, finally, Monster Booster can be used to boost the overall signal to the amps by up to 25dB.

AmpliTube MESA/Boogie's gear models are available for in-app purchase as a complete set or a-la-carte. Its gear can also be transferred with iCloud between different AmpliTube versions and devices.

Like all mobile versions of AmpliTube, AmpliTube MESA/Boogie is modular - and can be enhanced via a variety of powerful in-app purchases: Its built-in single track recorder can be expanded to 8-tracks. A waveform view can be added for DAW-style editing. There's a Cab Room that allows 3-D miking of cabinets with up to 2 microphones at a time (16 studio mics are available for purchase). Its Looper allows for quick and easy looping of up to 4 different loops. Loop Drummer is an essential rhythmic tool for accompaniment. And, with the included Song/Speed Trainer section, any player can load and slow down, or speed up their favourite songs without affecting the pitch.

Plugging into a world of sound

With IK Multimedia's range of interfaces for mobile devices, getting tone from AmpliTube MESA/Boogie is as simple as plugging into an amplifier. iRig 2, iRig HD, iRig PRO and iRig Pro DUO are IK's latest generation of interfaces that allow players to plug in and get pristine, pure sound quality from their Mac or PC (or iPhone or iPad). AmpliTube MESA/Boogie features full MIDI integration and can be controlled with standard MIDI controllers like the iRig BlueBoard compact wireless foot controller.

AmpliTube MESA/Boogie for iPhone/iPad is a universal app available now as a standalone app with all amps, cabs and stomps included for just $/€24.99 from the App Store. Additionally, AmpliTube MESA/Boogie models are available as in-app purchases inside of AmpliTube for iPhone and AmpliTube for iPad as a complete gear bundle for $/€24.99, or $/€9.99 for individual amps and $/€2.99 for individual stomps.

To download AmpliTube MESA/Boogie on the App Store, please visit: