Ever wanted to get that signature vocoder effect as heard on tracks by legendary artists The KLF? Help is at hand - G.W.Childs is here to show you how to do it!

Years ago, seemingly in a puff of smoke, the KLF vanished from the music industry. Maybe all was well with the world. I find that unlikely. Because now that things are getting crazy again, a strange little ice cream truck came on the scene recently, signaling the long awaited return of the Justified Ancients. To celebrate, I thought a lesson in vocoding might be in order demonstrating a classic example of the KLF- Last Train to Trancentral.

While Reason wasn’t around at the time of the original KLF recordings, the BV512 is more than capable of recreating the electric, humming, robotic modulation needed to evoke the vocals of the classic dance track. And while the good ol’ 512 will be the centerpiece, there are a few things we’ll need to get going before we start bringing in vocoding… how about rhythm? Starting with Tempo! A quick trip to YouTube sonically reveals the original track, and as I tap tempo along to it, lo and behold… It’s the beautiful 122 BPM!

With the proper time established, we can now prepare the arrival for the Timelords with a recording of my own voice, singing the lyrics to Last Train, as we’ll need those dry vocals for our modulator while vocoding.

I’ll set up a regular audio track with the Command+1 shortcut and record some of the lyrics I found from the internet that shed light on what’s being said under all that modulation. And grip myself, as I’ve wanted to record this cover for a long time! 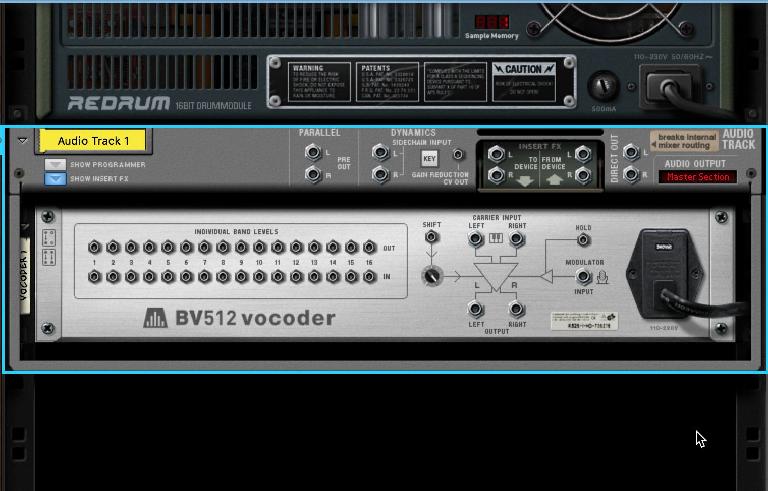 Now that I have the vocals recorded, I’ll need to create a BV512 vocoder to add on to my audio track as an insert. While that sounds pretty easy, it’s not as straightforward as it might seem, thanks to the additional routing that needs to take place. I’ll hold down the Shift button as I create my BV512 right in to the instrument rack for an audio track. Holding down the Shift button causes Reason to refrain from auto routing its chords from the 512, which needs special routing. 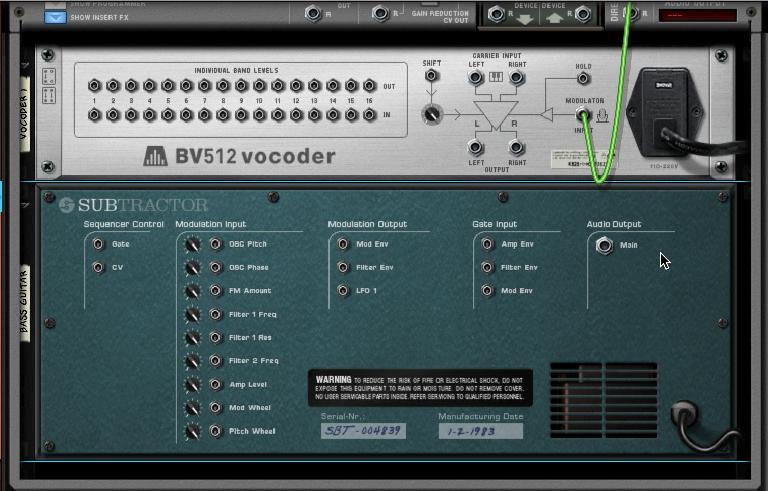 I’ll drag a patch cable from the Modulator input on the back of the BV512 in to the Left Direct out, which will establish the voice as the modulator, and not the carrier, where it wouldn’t work very well. 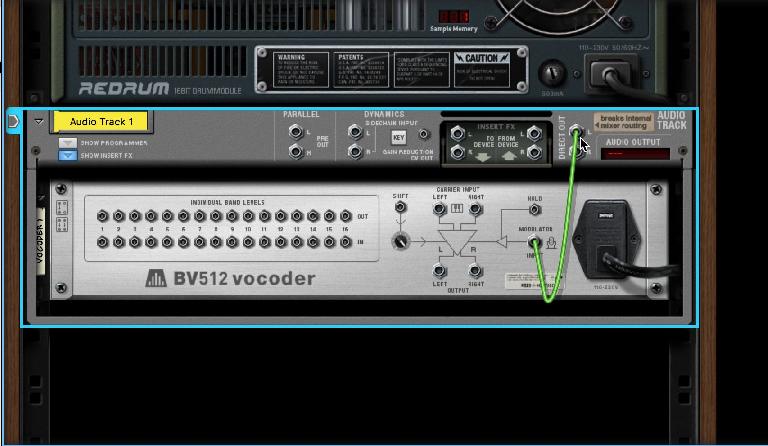 Once I’ve got my vocoder source audio recorded, it’s time to bring in a Subtractor and set up a patch that’s going to bring a wide enough carrier for the vocoder that I might please the justified ancients. Remember, for the vocoder riffs to be big, the synth carrier signal needs to be big and fat! The Subtractor excels at this! I’ll Shift+create the Subtractor, so that no routing takes place. Then, I’ll route the output of the Subtractor in to the Left Carrier input on the BV512. 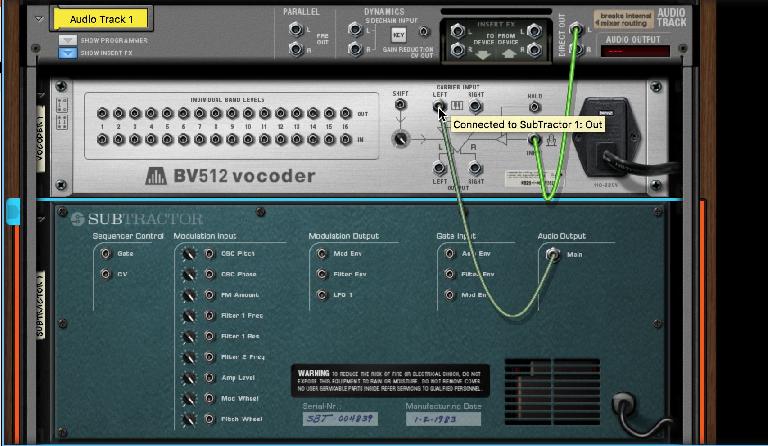 Okay, all the inputs are taken care of, but now it would be nice to be able to hear! Let’s route the Output of the BV512 to the From Device Input on the Audio track device. This will allow us to hear what the Subtractor does to my voice, once a key is pressed, while the vocals are playing back. 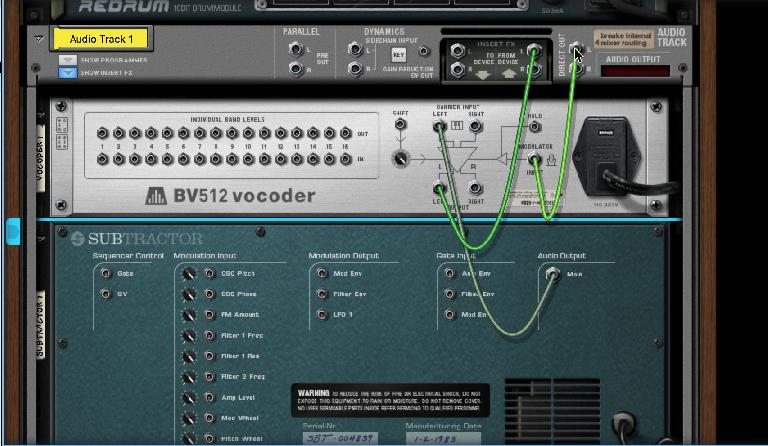 Oh, and what about the ability to play the Subtractor that’s currently locked in with the BV512? If I right click on the Subtractor and select Create Track for Subtractor 1, Reason will create a separate MIDI track so that I can play my Sub synth and hear some robots! 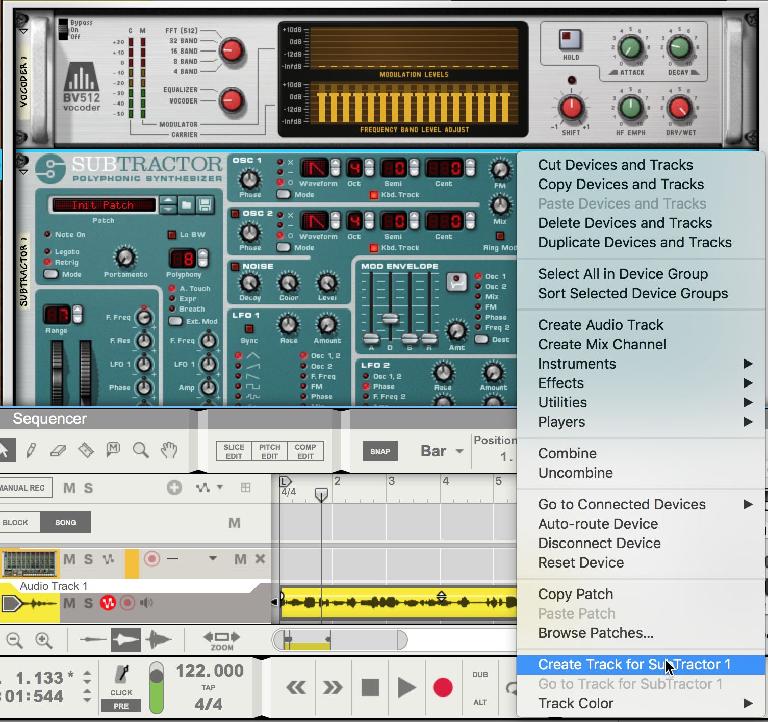 If I loop the recording of my singing within the sequencer of Reason using the Loop Points, I am able to play along with the recorded vocals and hear what my Subtractor is currently doing to it. Of course, we’re going to need to make some changes to get the sound right, and sequence a part part for the Sub. 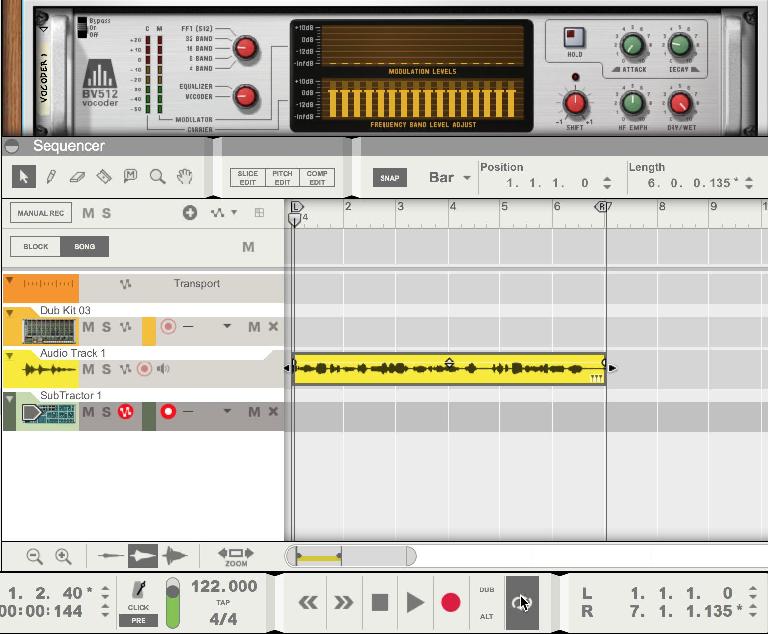 On a new Subtractor track I created, I record out the familiar pad melody from the best of my memory. Because the Subtractor relies on the vocals while running through the BV512, I wind up programming the pads on a second Subtractor. 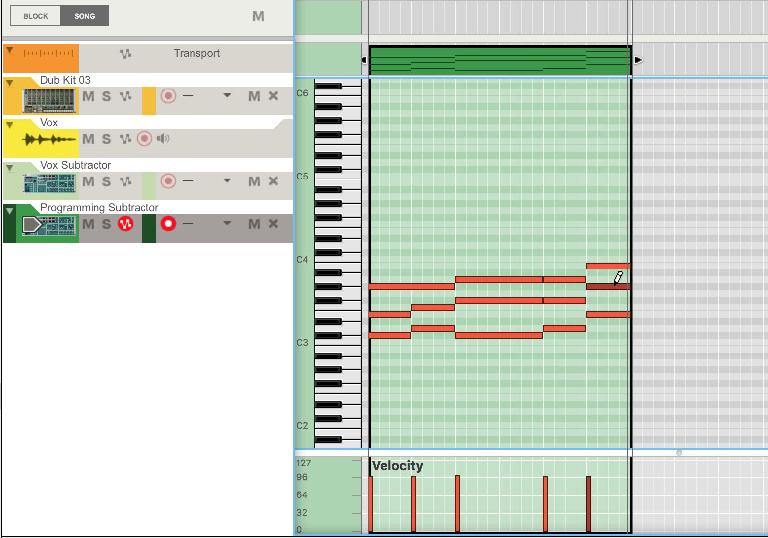 Then, I drag the MIDI clip over to the Vocoder Subtractor’s sequencer lane so that I can hear my work. Notice that it sounds a little muffled!

I’ll switch the Filter Mode of my Vocoder attached Subtractor to High Pass mode. This allows me to clean up the mud in the low end, and bring out some of the brightness of the Vocoder, and as I lower the Filter Cutoff, I begin to hear quite well where I want to remove the low end. You’ll notice I cut out a pretty good portion of the lows and mids. By doing this, I’m thinning the vocoder. But if I plan on adding modulation effects, which I do, remember that the effects will widen the vocoder again! 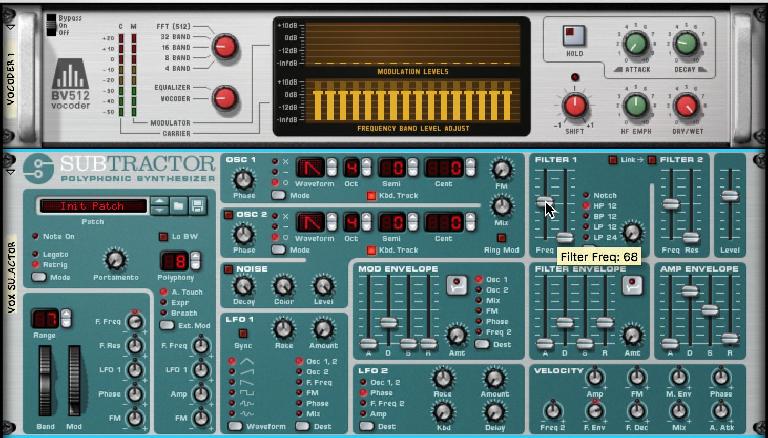 I’ll raise the attack slightly on the Subtractor so that keys pressed don’t make the vocoder so choppy on certain words. 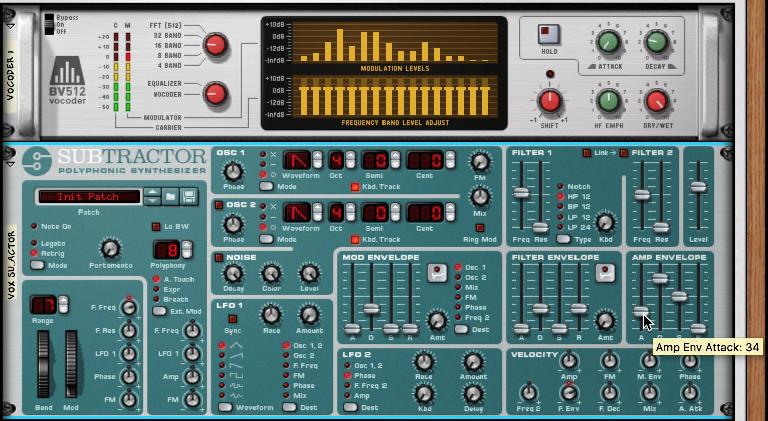 Then I’ll drop a chorus on to the BV512 without holding Shift, so that the vocoder is automatically routed through the Chorus. The Chorus is great for fattening up vocals and pads so it makes sense to use it here, as this is a hybrid of both! Then, I’ll raise the Rate of the Chorus up to 52. 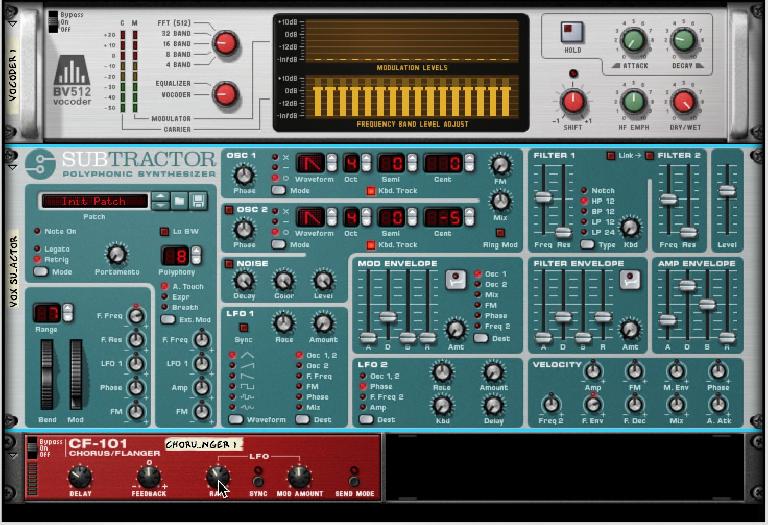 Now all you need are some drums, a few synths and a lot of different people on stage, and you could create a sound and an act very similar. Or just wait for the KLF to actually go on tour again… Hey, it could happen!

I love the KLF and hope you enjoyed recreating their vox with me. If you feel like pursuing this sound more, I’d highly suggest sample, sample and sample some more. 90s and late 80s techno rely a lot on old TV and radio samples, as well as vocal samples recorded around the studio. Samples are a great way to express ideas and opinions through music in a cool, undercover kind of way. Help the KLF stop injustice in the world by spreading your own message, and maybe we’ll get this world back on it’s feet, for real!

Learn more about Reason and sampling in the AskAudio Academy here.

LavaPirate
thanks for a well written tutorial! It's easy to get lost and confused with so many features on a DAW that you don't even know where to start or how to do things like this.