Logic Pro X ships with one of the most all-encompassing instrument and effect bundles of any DAW. But is it enough to fulfil all your musical needs? Joe Albano finds out.

It’s common practice for many DAW users to augment the plug-ins included with the workstation with plenty of third-party instruments and effects. Besides the fun factor of exploring new toys, this can be a good idea since every set of plug-ins has the potential to bring something new and interesting to the basic tasks of arranging and mixing. But some DAW users might prefer to do as much as possible utilizing only the built-in effects and instruments.

The idea of working strictly within the DAW can be especially appealing for Logic users—Logic includes more plug-in processors and instruments than the average DAW, and thus has a greater potential to be completely self-contained than most. On the effect side, just about every category is included, from basic tools like EQ, compression, delay and reverb to more specific processors for imaging and special effects. And when it comes to virtual instruments, Logic also shines.

But of courses the real question is, how do these built-in tools stand up to the many third-party offerings available? Of course, a new and different instrument or effect can always be welcome, and you wouldn’t want to limit every project to only the built-in tools, but do Logic’s included plug-ins have sufficient sound quality and features to achieve the kind of arrangements and mixes that would stand up to the best stuff out there without any sense of compromise? Well—spoiler alert—for the most part, if they’re used creatively by an arranger or mixer who knows their ins and outs well, the answer is yes. Let’s take a look at some of the reasons people seek out third-party toys, and what Logic has to offer.

One of the main reasons many DAW users look to third-party effects is for their emulations of the warmth and presence of analog hardware, which could otherwise be lacking in an in-the-box mix. But Logic is no slouch in this department—it includes a healthy collection of analog emulations that, while maybe not quite as detailed as some of the third-party toys, definitely capture the response and analog character of many of the most famous and popular pieces of analog kit.

The latest addition is a set of three Vintage EQs, which augment Logic’s existing set of six classic/vintage compressors—the compressors are a little less specific than the EQs when it comes to the front panel controls, but both collections provide excellent simulations of analog gear. In fact, Logic’s compressor, with its multiple analog models to choose from, has long been one of its hidden gems. 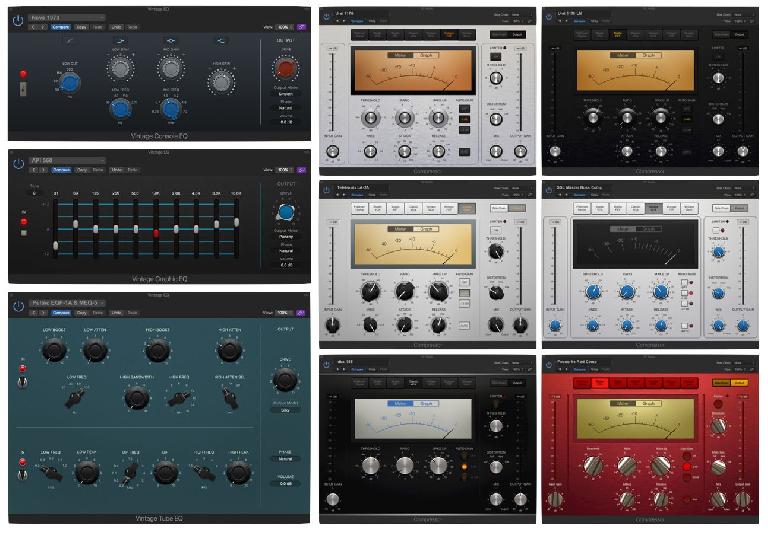 Some of Logic’s analog-style processors

Logic also includes guitar and bass amp sims and stompbox emulations. Once again, these are not as specific in their presentation as some, and so they may require a little extra effort to get the most characteristic tones out of particular amp models, but with even a little familiarity with the original, highly dynamic and realistic tones can be had.

Logic’s various delays and reverbs certainly hold their own in comparison with outside processors, but specialty effects are another big reason people often go in search of new toys. Many DAWs limit their plug-in collections to primarily bread-and-butter processors, but Logic also includes quite a number of specialty effects on top of the basic tools, with extras like a Mono->Stereo Spreader, Exciter, Sub-bass generator and even Vocoder effects. There are realtime pitch processors (including Pitch Correction), and a pair of new multi-effects acquired in Apple’s purchase of Camel Audio combine delay, distortion, and other fx with sequencing and modulation capabilities to offer some very creative options for sound design. 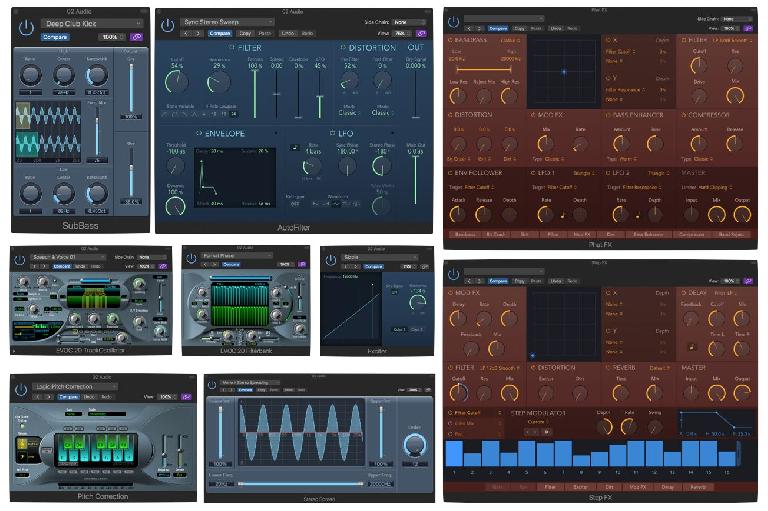 A few of Logic’s specialty processors, including Phat FX and Step FX

Mastering is an area where it’s common for people to turn to dedicated third-party processors. Here, Logic includes the Multipressor for multiband compression, Linear-Phase EQ for high-res tonal tweaking, and the Adaptive Limiter for loudness maximizing. Now, these Logic tools can certainly get the job done, but some third-party plug-ins provide many more options and potentially smoother results—tools like Ozone have additional options like multiple algorithms for fine-tuning the final limiting, and dynamic EQ for more detailed tonal shaping, along with comprehensive metering (though Logic does provide its own collection of metering and utility plug-ins, suitable for mastering applications).

One type of processing popular in mastering is MS—Mid-Side processing. Thanks to its new Dual Mono mode—available for all plug-ins—Logic offers MS processing with just about any effect, matching the capability of some top-notch third-party tools.

One task Logic’s plug-ins don’t cover is audio repair. You won’t find tools like spectral repair, audio extraction or noise removal (de-clipping, etc)—for those highly specialized tasks you will need to turn to outside help like iZotope’s RX, a comprehensive suite of audio repair tools. 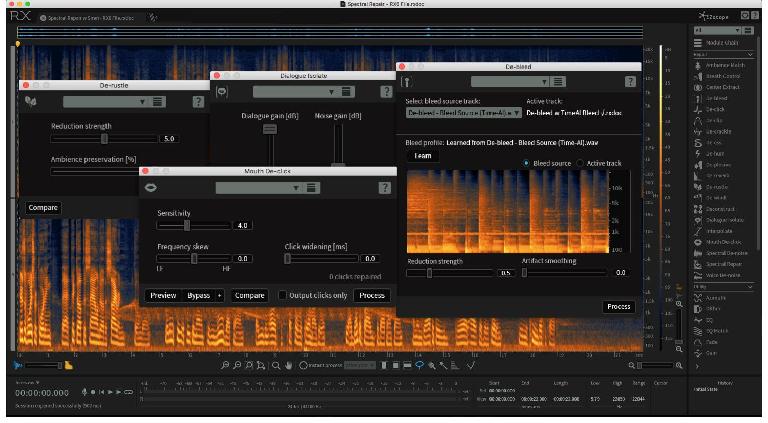 iZotope’s RX provides audio repair, one of the few tasks not addressed by Logic’s built-in plug-ins

When it comes to virtual instruments, Logic is again especially well-equipped, though perhaps not as self-reliant for some larger projects. Probably the most fundamental instrument in its collection is Logic’s long-time sampler, the EXS24. Now, I won’t pretend that EXS can be directly compared to the industry leader, Native Instrument’s Kontakt—that sampler engine, which powers a large number of the virtual instruments out there, has just about every feature imaginable, including its own dedicated scripting language for customizing both features and interface. EXS’s claim to fame is tight integration in Logic, which makes it considerably more efficient in terms of system resources, but its interface is a bit dated and within itself  it lacks some of the features widely used in many Kontakt-based VIs.

But EXS is quite a bit more capable than it may appear at first glance. Along with niceties like the comprehensive modulation matrix, over the years many up-to-date features have been quietly slipped in under the hood, including goodies like round-robin/random sample selection and keyswitching options. Many of these are hidden away in the secondary Edit window, making advanced tweaking/setup tasks a little less accessible than they could be, but EXS does now offer most of the modern capabilities it was once missing. Those it still lacks can often be made up for with other features in Logic—for example, while EXS isn’t multitimbral in the way Kontakt is, multiple instances of it can be combined in a Track Stack for multitimbral functionality, and saved in a single Patch, along with effects and mix settings & routings.

The EXS sampler is a little long-in-the-tooth, and it won’t put Kontakt out of business, but it’s much more capable than it appears at first glance

Just as Kontakt provides the underlying engine for many third-party VIs, EXS provides the underlying engine for some of Logic’s other advanced instruments, like Drum Kit Designer and the new Studio Strings and Studio Horns. Logic’s Drummer feature—which includes the intelligent creation of drum parts—and the drum sounds in Drum Kit Designer are as good as any third-party plug-in. But just as with Logic’s amp sims, you may need to do a little more mixing with the multi-output kits to get the kind of big mix-ready drum sounds that some plug-ins offer as presets.

The same is true of Logic’s newest instruments, Studio Strings and Studio Horns. These are highly multisampled, multilayered VIs with articulation switching and some advanced performance features like auto-split of ensemble patches and legato. Both bring a new level of sophistication to Logic’s acoustic instrument collection, but of course those who need to generate top-quality full orchestral scores will need to turn to the bigger, dedicated third-party libraries, which provide much more comprehensive sound sets and performance programming. Still, if Apple continues to move in this direction, Logic’s advanced instrument collection could potentially begin to rival at least some of the smaller libraries.

One area where Logic is second to none is synths. Now, dedicated synthesists will tell you that you can never have too many synths—every design offers something unique and distinctive—but when you need to reach for just about any kind of synth sound, you should be able to find it in Logic’s collection. Currently the big gun is Alchemy, also part of the Camel Audio acquisition a while back. Alchemy is truly a monster synth, with multiple types of sound generation and some very advanced and comprehensive modulation and programming capabilities—after all, it was a third-party product, and a very popular one at that.

But Logic also has more straightforward synthesis offerings like Retro Synth, which utilizes a relatively simple interface to provide the characteristic sounds of several different kinds of synthesis—analog, digital (FM), and wavetable. Once again, it doesn’t precisely emulate specific models down to the last control, a la Arturia’s Minimoog V and the like, but any synthesist with even a basic familiarity with the originals will be able to easily dial up some classic sounds. There are many other synths on board, large and small, including ES2, another comprehensive analog/digital design, and Sculpture, a modeling instrument with a deep set of possibilities.

Of course, despite the depth of Logic’s instrument collection, given the sheer number of instruments available via third-party VIs most heavy instrument users will want to augment Logic’s offerings with some of these, but it won’t be because they couldn’t find something that could get the job done.

On that note I’ll wrap up by saying this: Logic’s effects and Instruments may not provide everything to everybody—no plug-in collection ever will—but with few exceptions there should be something in there that can deliver the goods for almost any task. Many third-party processors may be more appealing, and plenty of instruments offer more comprehensive libraries and expressive capabilities, but even though Logic’s tools might sometimes require a little more work to get specific sounds or fx, with a little effort the results should be able to stand up to the best of them. So don’t be afraid to turn to the sometimes less-glamorous tools at hand—they may just do the trick after all.

Learn Logic Pro from beginner to advanced level in the Ask.Audio Academy: https://ask.audio/academy?nleloc=category/audio/application/logic