How to Use Four Effects on Pioneer DJ Mixers

Language
So you want your DJ sets to be full of creative effects? Sara Simms shows how to add four effects to your mixes when DJing on Pioneer Mixers like the DJM900.

Do you listen to DJ sets and wish you knew how to create all the effects that you hear the big DJs use? Whether you're an open format DJ or play more underground music, learning to use the effects on Pioneer DJ mixers can add an original creative flair to your sets. Take full advantage of everything your Pioneer DJ mixer has to offer and learn to mix with effects. Here's a guide on how to get started: 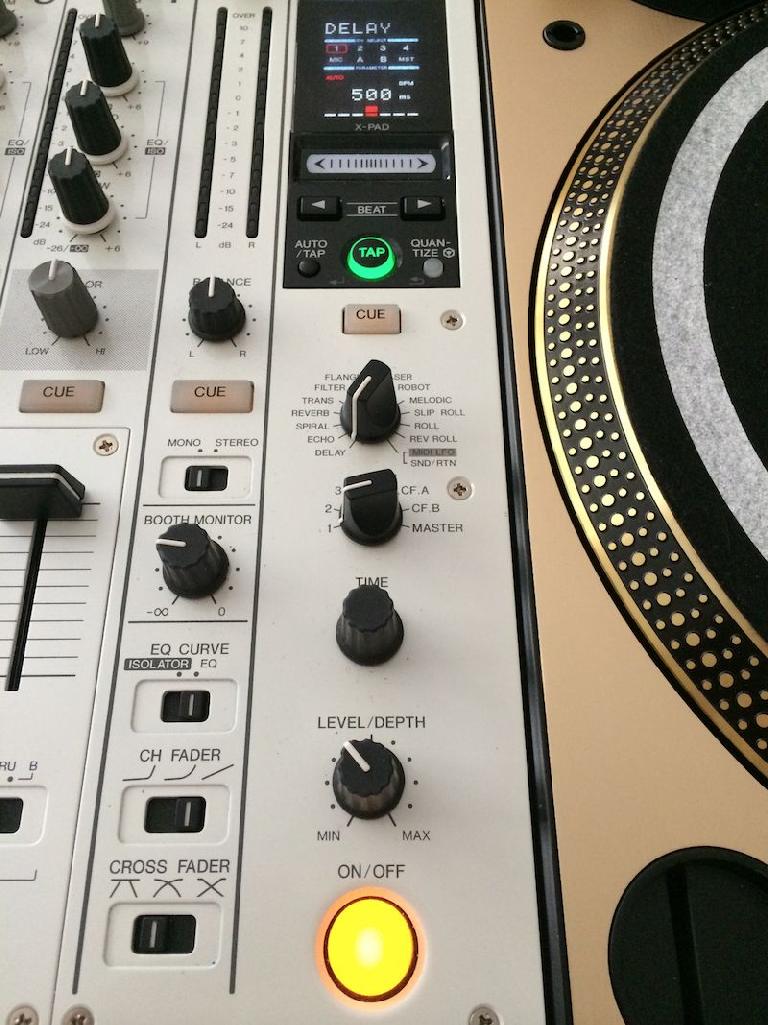 On the right-hand side of Pioneer's DJ mixer is the effects section. This tutorial will use the DJM-900 nexus as a reference, but the guidelines below will apply to most Pioneer DJ mixers.

Further up on the mixer are the Effects and above this, an Auto/Tap and Tap button that allows you to tap in the BPM. At the top of the Effects section is the X-Pad, which can be used to adjust the Effects and turn them on and off.

No matter which effect you decide to use, the BPM of the track must be set on the mixer so that the effect can function at the same speed of the track.

The mixer should automatically calculate the BPM of the track when Auto/Tap is set to Auto. However, sometimes the BPM needs to be set manually. To do this, press the Auto/Tap button to change the mode to Tap. Hold down the Tap button and change the time knob until the BPM display on the screen matches the BPM of the track. The BPM can also be tapped in manually by tapping in quarter notes at the same speed of the song's tempo. 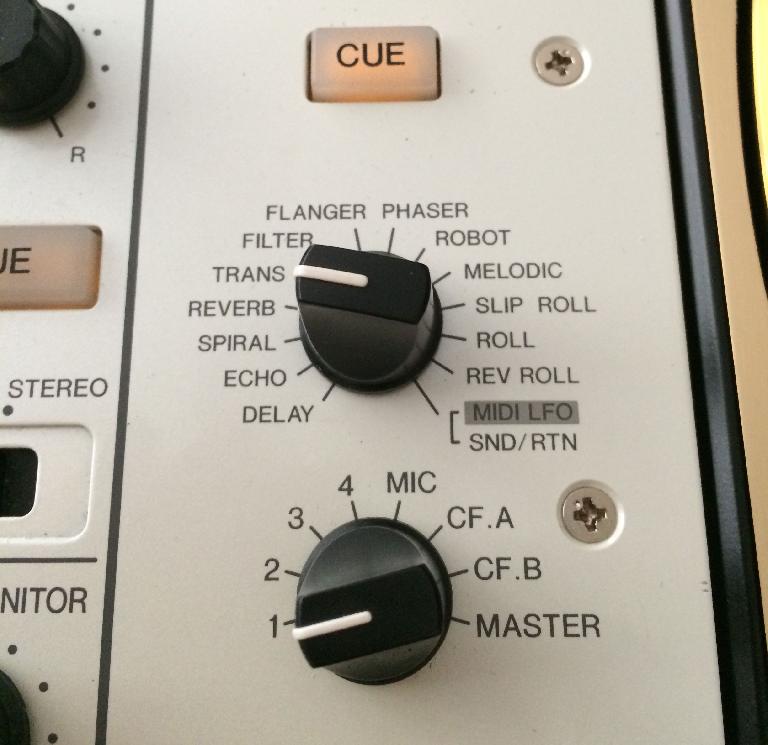 Reverb is the gradual decay of original and reflected sound waves that occur naturally as a result of room acoustics.

When to Use it: During breakdowns, or when playing techno, tech house or minimal genres.

Reverb can be used creatively during DJ mixes to add space and dimension. It can also be applied to acapellas in small amounts to give them character. The Reverb time can be adjusted, so that the frequency of the reverb tails change during the mix. Reverb is best used in small amounts.

If you're using Reverb during breakdowns, try turning down the Low EQ at the same time you turn up the reverb. You can also turn up the Reverb, turn down the low EQ and fade the channel fader down. 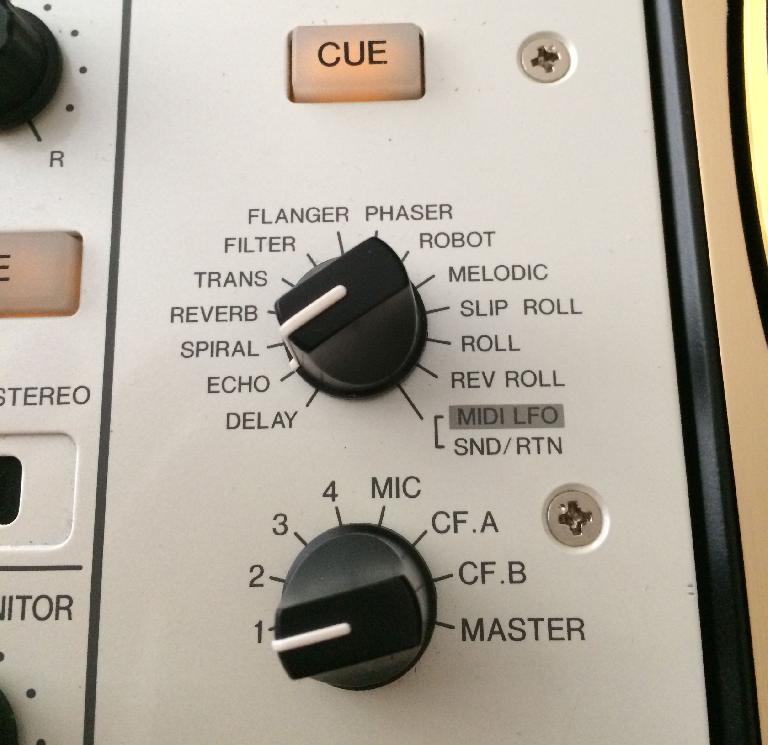 Many DJs use the terms reverb and echo interchangeably, but they have subtle differences. Echo effects are time-shifted repeats of a signal, but they are designed to sound like the echoes found in nature.

When to use it: Echo can be used creatively to transition between tracks. Using this method, you'll hear the Echo fade out, so you can bring in the next track. Echo is a useful effect to use when you're transitioning between two tracks with different BPMs, or the second track has a long intro.

Transition Idea: Start out by playing a tune, and set the BPM on the mixer to the same BPM as the track. Assign the Echo to the channel the track is playing on. Set the time of the Echo by using the Time knob or the X-Pad; a good choice might be 3/4. At the end of the song, turn the Echo on by pressing the ON/OFF button and take the volume fader down. When the Echo begins to fade away, play the next track. 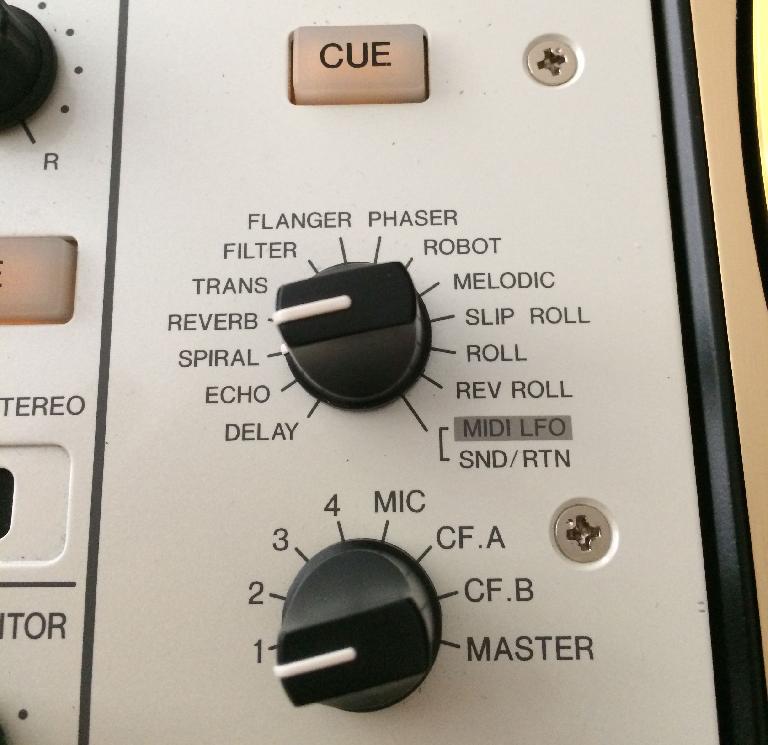 Spiral is a reverb effect that adds a reverberation effect to the input sound. When the delay time is changed, the pitch changes simultaneously. Spiral is a unique effect in the way that it gives you control over the effect that it creates and when this effect comes out of the mix. The ON/OFF button functions as a release for the effect and the Spiral trails off once it’s hit.

The Downward (or Upward) Spiral:

To pitch the Spiral up or down, the X-Pad or the Beat buttons or Time knob can be used. Spiral can be turned on or off by touching the X-Pad, even if the ON/OFF light is solid, meaning the effect is off. 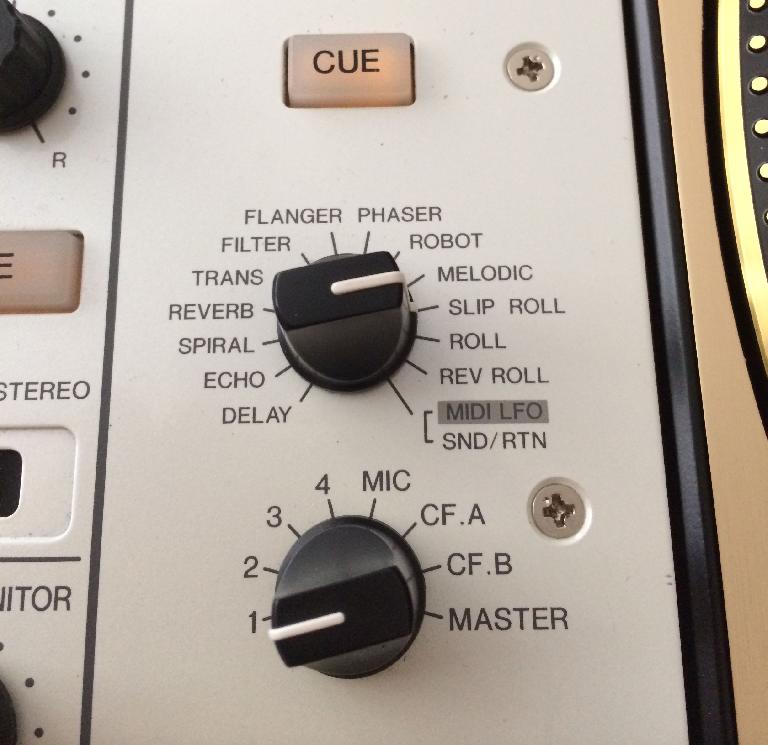 Slip roll is an effect that's found exclusively on Pioneer DJ mixers. It records small bits of audio and repeats them. The length of Slip Roll's speed can be adjusted so that it will glitch different parts of the tune. When the effect is turned off, the track that's playing is immediately audible.

When to Use It: Slip Roll can be used to create a fresh, glitchy section in a track, transition between different tracks or create your own cool buildup.

How to Use It: Before starting to use Slip Roll, the mixer needs to know how fast the track is. Start out by playing the track, and automatically set the BPM or tap it in. If you don't do this, the Slip Roll effect will be out of time with the music.

Choose the Slip Roll value by selecting it with the X-Pad, Beat Buttons or Time Knob. Start off with the 1/1 Time, then change to 1/2 and 1/4 so you can hear how the effect sounds at the different time values.

Adding effects to mixes is a great way to carve out your own sound as an artist. Pioneer DJ's effects allow you to easily add new sounds to your mix. It's likely that you'll run into these mixers if you're playing out professionally, so every DJ should learn to use at least a few of their effects in their sets.