How to Recycle Your Effects Chains in Ableton Live

Language
Here's an excellent way to save you precious time when producing in Ableton Live. It's all about recycling your hard work creating cool effects chains form previous projects and reusing them now.

It’s always tempting to go crazy with inserts in Ableton Live. After all, there is no limit, if you’re using the full version, and you can really sculpt the sound that you want. What blows me away is that no one seems to ever save their hard work, prior to a session, and really catalog those cool effects chains that were made during the project! In this tutorial, I’d like to go over my method for saving effects chains, and how to make them really worthy for reuse later!

At the end of a project, it’s really nice to go back and listen to some of your work and really catalog effects that you like. Personally, I tend to go into my Live sessions, and actually solo different tracks, just to really hear what’s going on. 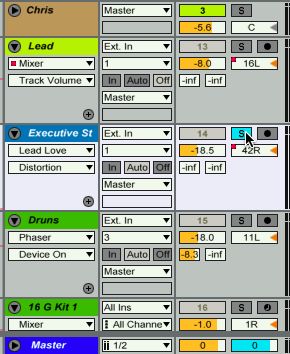 While I’m doing this, I tend to keep a spreadsheet open, so that I can write down which chains are interesting enough for reuse. Ideally, you’ll have a database (which can be just a spreadsheet) open that has all of your custom patches and effects chains.

Tip: Why You Want a Database!

Cultivating such a system can really assist you in not only developing your own sounds (because you’re always using original patches) as well as save you some time engineering that same effect, or patch over and over again. And, if you think this sounds nerdy, think again! All of the true pros always have extensive databases of audio files, patches, settings, even snapshots of modular rig. Organization is the key to taking your career to the next level!

Once you’ve found an effects chain that you really want to add to the old Rolodex, it’s time to collect and group! This part is easy, and kind of fun, as you’re really going back and turning your work into a useable piece of gear of your own with parameters in place that you set up.

The only thing you want to watch out for are redundancies, like devices that are not doing anything within the chain. For example: in this chain below, I have a chain of effects that I used for a lead synth in a session I had a few weeks go. You’ll notice that there is one Amp that is not even on, and there’s no automation assigned to any part of it! Why keep it around?! I’ll select this Amp, and push the Delete button on my keyboard. Now, it’s gone!

Now that our chain is trimmed and prepped for collection, let’s put the whole thing together. Depending on the size of the chain, it’s usually a good idea to minimize each module, so that you aren’t having to scroll to each module that doesn’t appear on the screen, etc. To minimize, simply double-click each module near its heading so that it folds down.

Now, I can either use the Command-G shortcut to group all of the devices together. Or I can go up to the Edit menu, and select Group. This will merge all of my effects, intuitively, into an Effects Rack! And, in doing so, give me a method of showing myself the sweet spot of the effects assortment (meaning: the knobs and levers that really make the most impact, out of all of these particular effects), at a later time, when I definitely might not remember it! 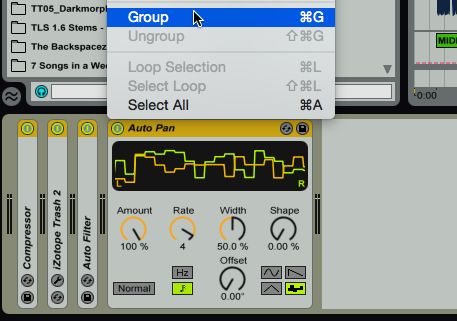 Now that we have a Rack that mostly exemplifies the sound and hard work that we once put in, let’s narrow down what’s so cool about it, and set up some controls that really make the most difference for future use. You’ll notice that there is now a new field within our stacked devices called Audio Effects Rack. Actually, this is the container device! If you press the small Ableton logo looking button, you’ll open the Macro Controls.

One parameter that I know that I want to be an option in this setting is the Amount of AutoPan that is currently taking place. I’d rather it be an option, in case that I decide to automate panning on my own, later, when this effect chain is being used. I’ll press the Map button, at the top of the Audio Effect Rack, as it’s now called...

Then, I’ll click the Amount Knob, so that small, dark, brackets appear around it. This means that the knob is now targeted.

Next, I’ll press the Map button on the Macro Knob in which I would prefer for the AutoPan Amount knob be assigned to, in this case Macro 1.

Because I want full access to how much AutoPan I can bring in, I won’t use the Chain List to edit how much AutoPan Amount I can use. But I will with Trash. In iZotope’s Trash Ableton container, I’ll enable Configure Mode. This button automatically opens up Trash’s interface, and whatever I touch will be made a toggle on the Ableton container, below. 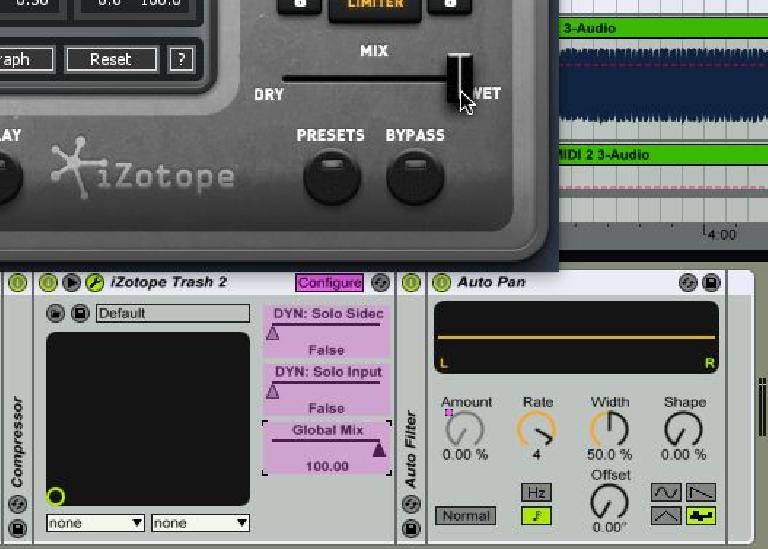 Now, I’ll click the Global Mix slider, as it appears in Live, for Trash, and then press the Map button. See, even third-party effects can be accounted for, within Live’s own Racks!

Finally, I’ll rename these two Macro knobs so that their descriptions mean something to me, and possibly others that use this Rack, if ever, in the future. This can be done by simply selecting the Macro you would rename, and then using the Command-R shortcut to rename this macro. I’ll name the AutoPan Amount as Space, the way panning things way out makes Space, right? And, then name the iZotope Trash Global Mix Macro as Distortion. Then, I’ll clear all of the other macros of titles, by Command-R and then pressing delete, to clear the existing titles, and then drop a dash in each square. This will tell the future me what is assigned and what doesn’t matter!

The final step is simply saving the Rack, by pressing the small save button on the title bar. This saves it within your User Library, and then allows you to name it, from within the Browser. I’ll name it, Lead Love, as that is what it gave... Love to my lead. 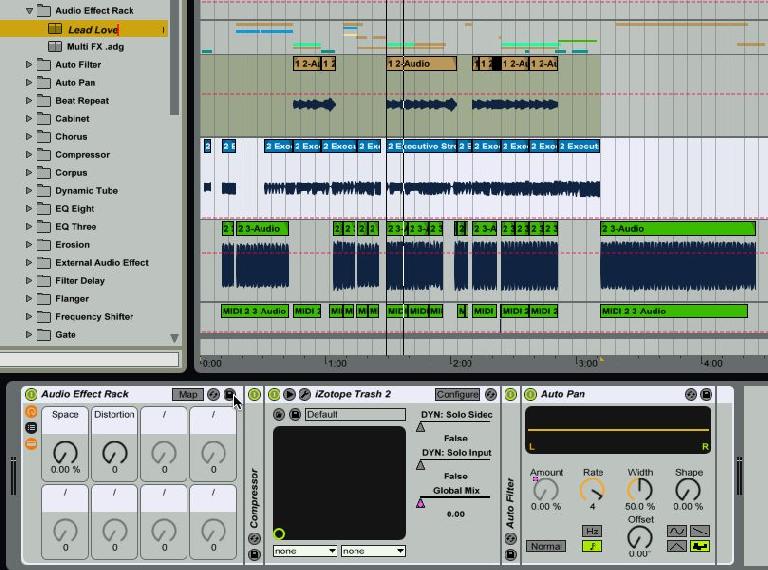 Of course, I can always go back and assign more macros and make this rack more elaborate. But, if I only used it in one way, within a certain song, who says I’ll use it any differently in another? Sometimes, just getting it in the directory is enough. The sound is right, after all!