How To Record With An Analog Front End

Using an analog stage when recording digitally is common practice and can be a good way to give a warmer and more authentic sound to your recordings. Joe Albano explains how it works.

A lot of recording nowadays involves audio generated inside-the-box—virtual instruments, drum loops, and fx libraries all provide sounds without having to capture them out in the physical world. But even the most inside-the-box studio at times still needs to record audio the old-fashioned way—a microphone sending audio through analog front-end audio hardware. Here’s a brief guide to assembling and using an analog front-end equipment chain for the modern DAW studio operator.

The source for any analog recording will either be a microphone picking up an acoustic signal, an electronic instrument, or a DI—an electric guitar or bass plugged directly into the DAW interface. In many cases that interface will provide all the necessary hardware to record—mic inputs for acoustic audio sources, line inputs for electronic instruments like hardware synths and drum machines, and “instrument” inputs for electric guitar and bass. But often additional hardware may be needed or preferred.

If an interface doesn’t have a suitable Instrument input—specifically designed to handle electric guitar and bass signals—then an external DI, or Direct Injection box may be needed. When those instruments are routed directly into the DAW instead of going through a miked-up amp they need to be plugged into circuitry that provides suitable gain and input impedance to insure a good signal level and tone. DI boxes come in many varieties, and are easy to use—the instrument is plugged into the DI, which provides a good signal to feed into a normal line-level input on the DAW.

When it comes to mic signals, most interfaces provide at least one or two mic inputs, and as many as eight or more on larger units. In some cases these are high-quality mic preamps, but often they’re functional but undistinguished circuits, lacking in the warm, analog “character” that higher end mic preamps can bring to the party. For recordists who want some of that analog “magic”, high-end external mic preamps are the first component in an analog front-end for the more discerning engineer or producer.

Following the mic pre, hardware EQs and compressors are often used to shape the signal in terms of tone and dynamics on the way in. These may be employed for technical purposes, or simply to add analog character. Tube-based EQs can add extra warmth to the signal, and front-end compression can control wide dynamic swings to protect from interface ADC (Analog-to-Digital Converter) overloads. 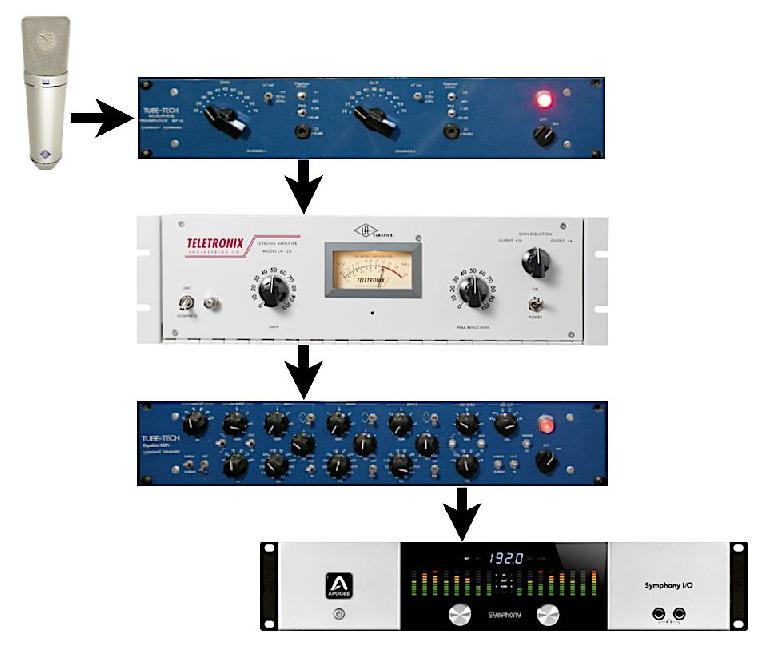 A collection of separate processors may be assembled into a front-end signal chain and this approach lets the engineer choose particular brands and models for each step in the recording chain, mixing and matching to taste. But for those who’d prefer a simple all-in-one front-end solution, there are many hardware “channel strip” boxes, which combine the mic preamp (or preamps) with EQ and compression, for a complete recording package. 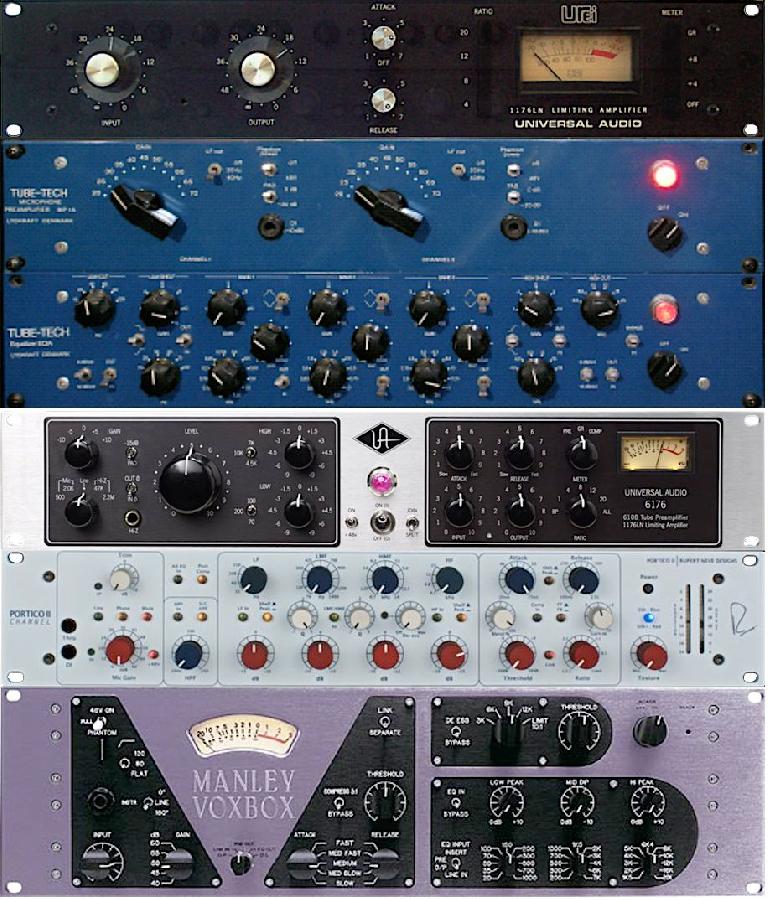 Operators of smaller studios who do their acoustic recording via overdubs one track at a time can often get by with a single hardware front-end chain, re-using the analog components with different mics and sources as they build up the arrangement.

One of the main reasons for assembling an analog front-end signal chain to augment the i/o of the interface itself is the desire for a warmer, richer, more “analog” sound quality which can range from subtle clarity to more pronounced warmth and thickness. Recordists who simply want a cleaner, more open and detailed signal from their high-end mics might choose front-end gear that’s designed to provide the most neutral high-quality sound. Engineers sometimes refer to this design philosophy as a “straight-wire-with-gain”. This kind of gear may provide a more detailed three-dimensional sound quality then the more utilitarian circuit path in many typical DAW interfaces.

The other side of the coin is front-end hardware that’s designed to add analog character—the warmth of slightly overdriven tubes or transformers, or the slight edge of certain transistor circuits—which is meant to enhance an otherwise clean signal. Tube-based preamps and EQs, FET compressors and transformer designs offer a distinct character, and while that can be emulated in software later in the mix, many producers feel there’s no substitute for the real thing, or would prefer that the recorded audio files already have some of the desired analog quality, leaving less to think about later on. 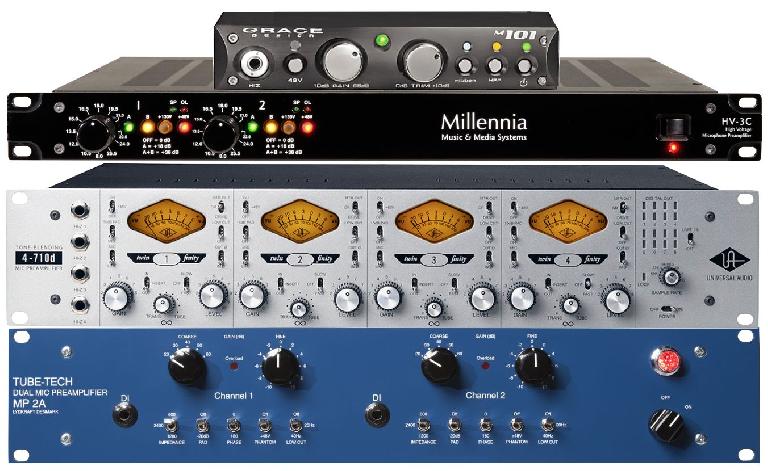 There are a number of options for the intrepid recordist assembling an analog front end. I’ve already mentioned two of them—separates versus an all-in-one unit, and the choice of warmer “character” models or cleaner “straight-wire-with-gain” designs. Here are a few additional considerations.

Both clean or character preamp designs can often provide a superior audio signal quality, but when high-end preamps are used with high-end mics, the results may vary. This can be in part due to the specific input impedance of the preamp. Many quality mics, especially vintage mics, are quite sensitive to this and will provide a subtly but noticeably different sound quality with slightly different impedances.

If an engineer plans to use a single high-end mic with an outboard preamp, then auditioning different preamp models with that mic is a good idea, to find the best match. For discerning recordists with a larger collection of mics, some high-end preamps offer the option of variable impedance. This can be very useful with different mics, or even with the same mic on different signals—the subtle tonal differences with different impedances can be just the thing for capturing the ideal tone, especially with difficult signals. 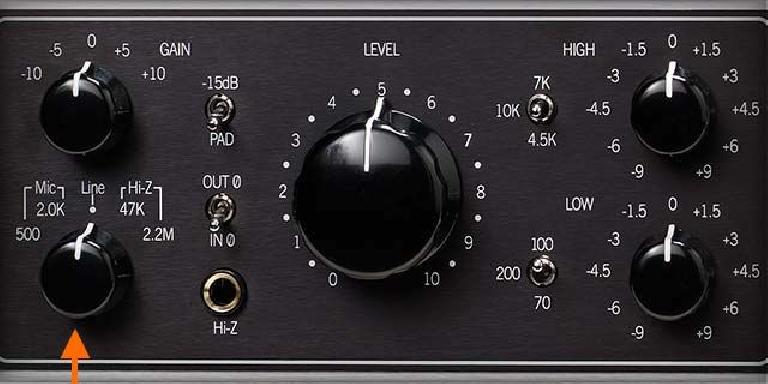 A mic preamp with variable impedance

When selecting a front-end compressor, there are very different-sounding options. Optical compressors offer subtle dynamic control, often combined with tube circuitry for warmth while FET models use Field-Effect-Transistors for gain control for a more aggressive compression character and transistor edge. An opto compressor might be a good overall choice if the primary recording application is vocals, but ultimately the selection will come down to the engineer’s preferences.

The Front-End In Use

When it comes to recording with a dedicated analog hardware front-end, a big question is just how much processing should be done at that early stage of the production process. Many recordists prefer to do no processing other than basic gain on the way in, to avoid potentially boxing themselves into a corner with choices that could turn out to be limiting later on in the mix, with additional parts in place in the arrangement. But that doesn’t mean they’d have no use for an analog front-end.

A good high-end preamp can help to pull the best signal quality from the mic; elements of the circuit design—like tubes or transformers—can add warmth without causing any problems down the road. Engineers have been known to run incoming mic signals through a tube EQ with the all the tone controls set flat, just to get the benefit of the analog warmth from the circuitry—this is a popular technique with the classic Pultec EQP-1A.

When processing is called for, subtlety is usually recommended. For example, since there’s no way to anticipate exactly what EQ will be needed ultimately, it’s a good idea to restrict any EQ done during recording to one of two approaches: very subtle tonal shifts, like a broad tilt of a dB or so, or specific corrections for obvious flaws in the source signal, like an unwanted ringing or tonal peak, and I’d still keep the EQ application to a minimum—if a dB or two can’t do the trick, then I’d try repositioning the mic or treating the environment rather than dialing up larger tonal tweaks.

Compression on the input signal can open up a can of worms. It may be necessary to control the level swings of a particularly dynamic source, but excessive compression can be much more difficult to undo later on if it causes problems in the mix. Again, there are two ways to approach dynamic control on input signals: use the compressor with a higher Threshold level, to subtly catch stray peaks that could cause ADC overloads without affecting most of the signal; or try a lower Threshold and a very low Ratio (i.e. 2:1 or so), to subtly squeeze the overall dynamic range of the signal, reducing overall level variations without accidentally robbing the performance of important musical dynamics.

Most small/home studios do make use of at least one analog front-end channel—whether separates or an all-in-one strip—to provide the highest-quality audio signals from the very start of the production process. With a little careful consideration in choosing the best hardware for a particular setup, and a subtle hand when using processing at the recording stage, the resulting audio recordings can enjoy a greater sense of openness and warmth, bringing the project one step closer to the perfect mix.

Learn much more about mixing and mastering in the Ask.Audio Academy: https://ask.audio/academy?nleloc=new-releases