How to Optimize Your Mac For Making Music

Modern computers are capable of handling the demands of audio production, but there are still recommended minimum requirements and optimizations that need to be taken into account for reliability.

The three main hardware components for DAW work are the CPU, RAM, and HD. 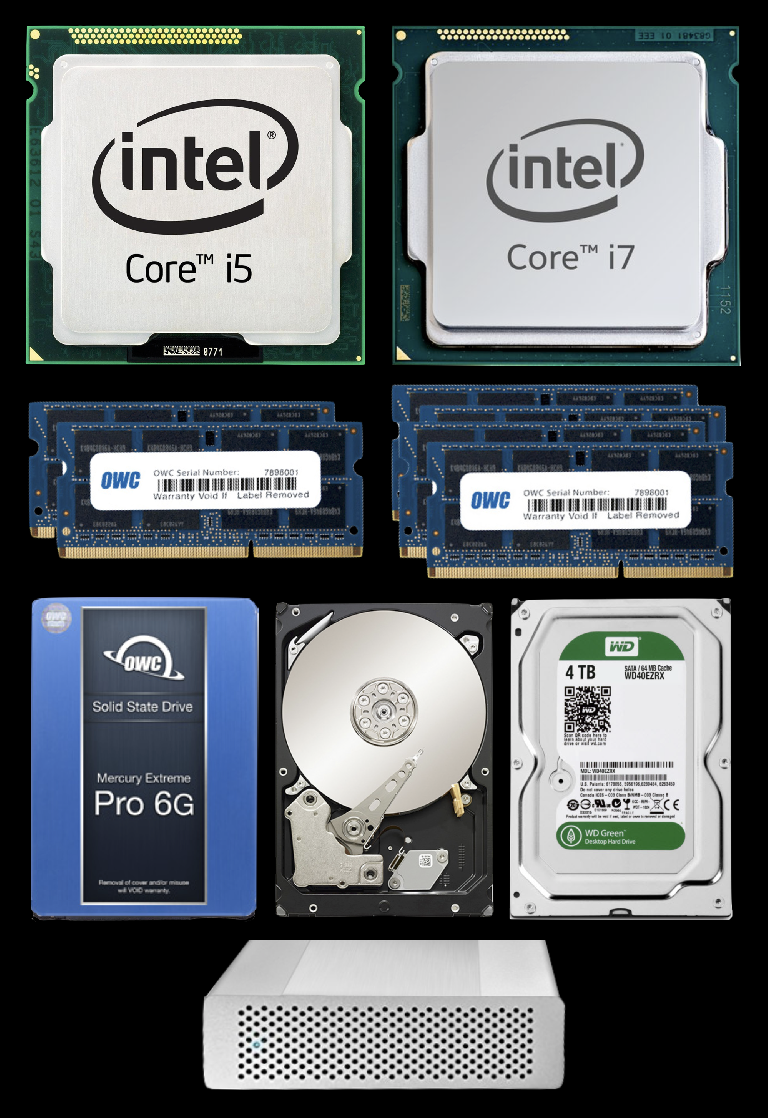 When it comes to CPUs, the clock speed and number of cores are the main specs. Clock speeds have pretty much stabilized at around 3-3.5 GHz, so the most relevant consideration these days is the number of cores. While the dual-core CPUs often found in budget laptops can certainly manage smaller sessions, for any serious audio/music production—especially if a lot of virtual instruments are used—a quad-core CPU would really be the point of entry, with 6 and 8-core CPUs offering welcome additional juice. Some CPUs have a feature called hyperthreading, which effectively doubles the number of cores.

Most computers use Intel CPUs, and again, while the smaller i3 model can handle minimal production needs, an i5 would be the entry level for serious production, with the i7 (or i9) strongly recommended for larger, more demanding sessions. (Apple’s coming shift—later this year—to their own ARM processors will be a development that will bear watching.)

RAM is integral to DAW operation. There’s an old saying—“you can’t have too much RAM”—and for DAW work it’s definitely true. 16GB is a realistic minimum, with 32GB recommended when possible.

The two considerations for hard disks are size and speed. Traditional mechanical drives—HDDs—should have a speed of 7200 rpm for audio applications. Better still, modern Solid State Drives—SSDs—are RAM-based and offer greater speeds. The only drawback of SSDs is a significantly higher price per GB, but prices are coming down gradually. 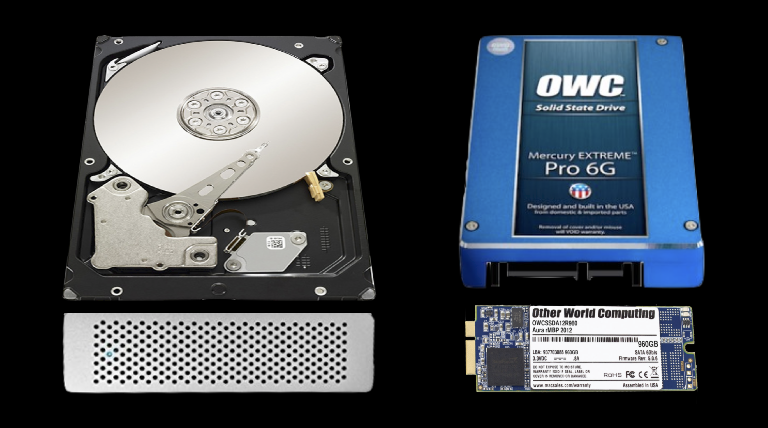 As to disk capacity, the bigger the better. Reasonably-priced HDDs are available with capacities of 4-8 TB and more, while similarly-priced SSDs tend to come in at around 1TB (with larger drives available at considerably higher cost). Some DAW users employ SSDs for critical use—startup drive and audio drive—and turn to HDDs for backup and general storage.

The startup drive—the internal drive that contains the Operating System and applications—is key. The OS is constantly accessing this drive in the background, so speed and capacity are especially important. A SSD can provide a noticeably snappier, more responsive overall response and would be a good choice. However, given that SSDs tend to come in smaller sizes, capacity is a significant consideration. Don’t be tempted to try to run a DAW system off one of the 128 or even 256 GB SSDs that are often included in budget laptops—a startup drive that size will fill up in no time, and performance and reliability can suffer. The general rule of thumb for startup drives is to keep at least 20% of the drive empty at all times, to insure free space for background activity and expansion. I’d suggest that a 500 GB internal drive would be a bare minimum, with a 1 TB (or larger) startup drive strongly recommended.

Traditionally it’s been common practice for audio production to have separate drives for different functions, to avoid having too much competing traffic on any one drive. Most studios reserve the internal startup drive for the OS, and have a separate drive (a physically separate drive, not a partition) for all their audio projects. That way, the OS can access the startup drive while audio is streamed form the dedicated audio drive without those tasks competing for the drive’s mechanical activity. Producers who make heavy use of sample-based virtual (software) instruments may also maintain a third separate drive for streaming samples, and for post production a dedicated video drive might be employed as well. And of course all these drives would need to have backup drives.

But the above scenario is based on the limited speed and physical activity of mechanical drives. If SSDs are used, then the use of separate drives is less critical—the electrical random access of SSDs is not subject to the same mechanical limitations. For example, a DAW studio might still maintain a dedicated audio drive, but keep sample libraries on the main SSD (where many are installed by default anyway). And of course for smaller, less demanding projects, everything can be run off a single drive, like the internal drive in a laptop, especially if it’s a SSD.

It’s important to know where the various components of a DAW-based system are installed, especially for troubleshooting. All applications—the DAW itself—are installed on and run from the startup drive. On a Mac, they’ll be in the root-level Application folder. Plug-ins are also installed in specific locations on the startup drive, and must be in those locations to be recognized by the DAW. Different DAWs support different formats, and may require plug-ins to be installed in different spots. For example, on a Mac, AU and VST plug-ins are placed in specific folders in the root-level Library-> Audio->Plug-ins folder, while Pro Tools requires its AAX plug-ins to be in the Library->Application Support->Avid->Audio->Plug-ins folder. 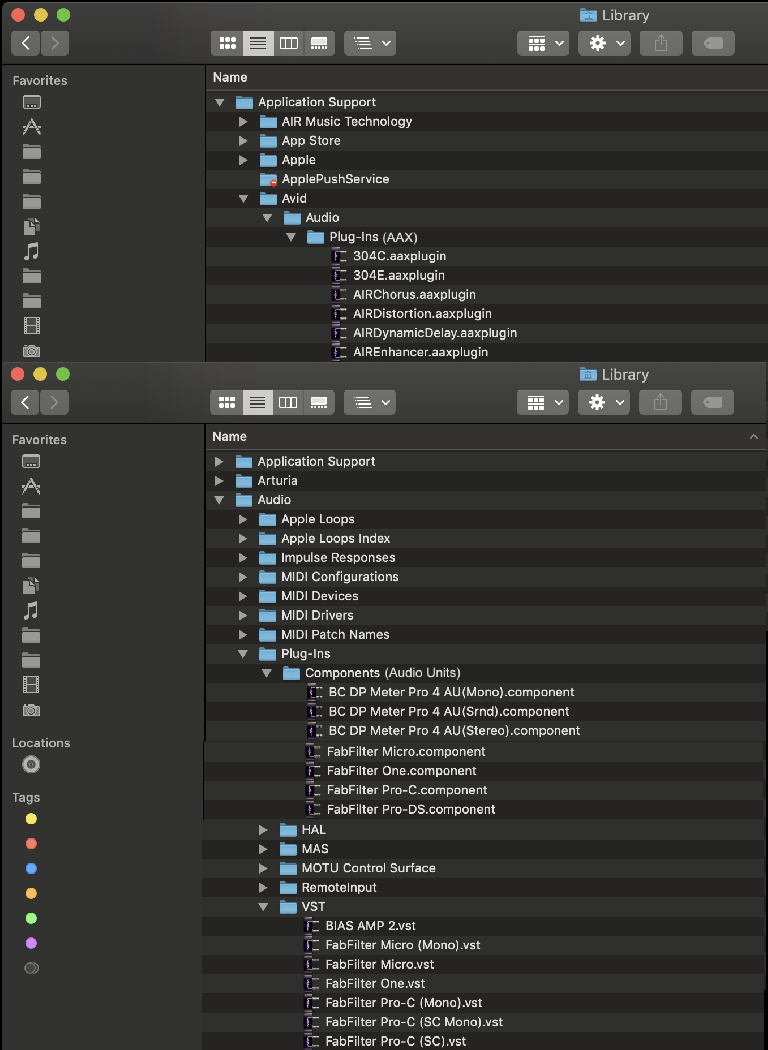 Sample libraries may be installed by default on the startup drive, though many provide an option to install them on (or move them to) a separate dedicated sample drive. If you’d be using just the basic sample library from a DAW or one main Sampler plug-in, and if your internal drive is a fast SSD, then it should be fine to install sample libraries there as long as there’s still that minimum 20% free space, plus additional space for the inevitable buildup of files. If you make heavy use of virtual instruments, with many sample libraries—especially large commercial libraries, like from Kontakt-based instruments—then maintaining a dedicated sample drive would probably be the way to go.

With a little attention to the various aspects of assembling and optimizing a computer for DAW use and audio production, it’s possible to enjoy better, more reliable performance, without having to jump through hoops to keep everything up & running.

Learn more about composing, recording and producing in the Ask.Audio Academy | macProVideo Library.