How To Mix In Your DAW Using Analog Hardware Effects

The sound of analog gear is as popular as ever, but integrating it into your DAW setup might seem daunting. Not so, as Joe Albano explains in this handy guide.

Even with the ascendence of digital recording, mixing, and processing, the appeal of analog sound has persisted—if anything, the unique qualities of analog audio have become more popular than ever, now that engineers and producers are so familiar with the euphonious lo-fi qualities missing from the inherently clean digital sound of today’s hi-resolution digital gear.

Virtual analog processors—plug-ins that emulate the distinctive character of analog hardware—are undoubtedly most people’s way of achieving that sound in their DAW productions, but a smaller, dedicated band of engineers and producers still prefer to turn to the real thing—actual analog hardware—for that warmth and presence that everyone finds so desirable. In fact, analog hardware never really went away, and lovers of the “real thing” routinely integrate classic vintage hardware units into their DAW mixers—that’ll be the subject of this article. 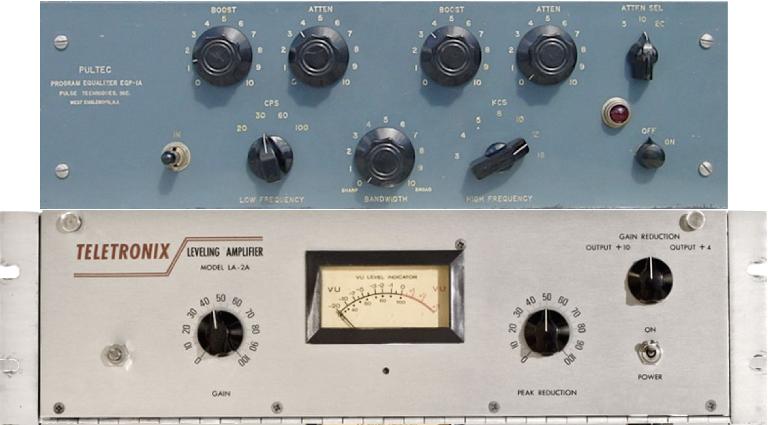 So why do some mixers turn to real analog hardware instead of virtual emulations? The current quality of the best plug-in emulations has never been better, and excellent options are available at all price points—some DAWs even include good-quality analog-style effects.

But there are any number of reasons why some prefer actual glowing tubes, transistors, and transformers. It’s not that the measurable distortion and saturation they generate can’t be successfully analyzed and created with ones and zeros—it’s more to do with an engineer’s ability to coax the perfect sound out of a particular box, and the experience of using the physical equipment, especially while recording.

Guitarists know this well—while a virtual amp may sound indistinguishable from the real thing in playback, the experience of playing through a plug-in—even at suitably low latency—is unlike the experience of playing through a real amp at full volume. The sound in the room interacts with the guitar strings, significantly affecting  the playing experience, and there’s really no effective in-the-box substitute for that.

For mixing, running a playback track through a hardware EQ or compressor may also offer advantages; this is especially true with equipment that responds dynamically, like compressors. While the general character of a certain piece of gear—like an LA-2A or 1176—can be easily emulated nowadays, the specific response of actual hardware pieces inevitably varies from unit to unit; often a producer has a particular unit whose unique response is familiar enough to be able to quickly dial up the exact subtle response desired—this may not be so easily matched even with a good-quality emulation, and that producer may insist on using his own hardware for the most critical tracks.

And of course sometimes a mixer or engineer may have an off-beat hardware processor that’s not been modeled, and the only way to achieve the unique sounds it delivers is to run a signal out of the DAW, through the box, and back in.

Integrating Analog Hardware And The DAW

Fortunately, with all but the smallest audio interfaces it should be relatively simple to insert an analog processor in a virtual DAW mix. But while the routing itself is pretty basic, an engineer who wants to patch in an analog box needs to know how to properly address certain specific considerations.

At the very least, the interface must have one or more pairs of extra input and output jacks, to pull the digital signal from a channel in the DAW mixer, send it through the analog hardware unit, and then return the processed analog signal back to the DAW.

There are a couple of ways to do this. To add an analog effect to a track, the most basic method would be to route the output of the desired track in the DAW mixer to a spare interface output (instead of to the stereo mix out, as usual). That signal—now in the analog world—would be sent to the hardware box’s input, where it would be processed. The box’s output would be plugged into a spare interface input, and that input would be selected in a new track in the DAW—that track would be used for mixing from that point on.

To insert an analog processor in parallel—like patching in a real vintage plate reverb, for example, the feed could be taken from an Aux Send (instead of a track output), routed to the extra interface output, and the analog reverb signal returned via a spare interface input to a different track/Aux, just as would be done in-the-box.

For inserting analog hardware in-line, many DAWs offer a more elegant solution that can feel more familiar to those used to working inside-the-box—this is usually called an i/o plug-in. Instead of applying virtual processing, an i/o plug-in is simply a router—I’ve used them in both Pro Tools and Logic. Logic’s i/o plug-in is a perfect example—in its window you select the spare interface output to route that track’s signal out to the analog world, and the spare interface input to bring the analog-processed signal back in to the mix at the same point in the channel strip—just like inserting a virtual effect. 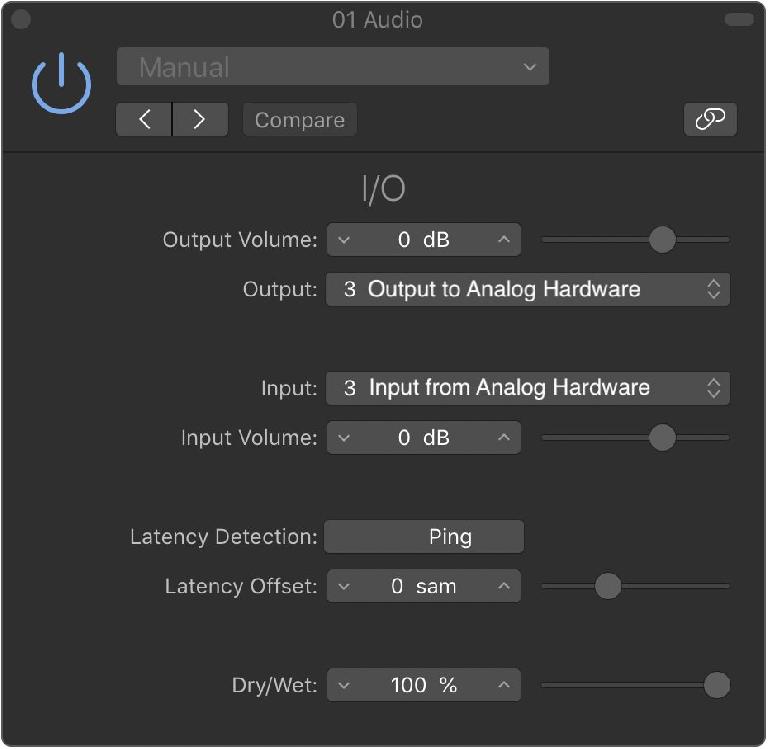 As you can see in the screenshot, there are also level controls to match DAW levels to the analog level requirements of the hardware—I’ll come back to that in a minute. An i/o plug-in makes short work of the DAW side of the hookup, without the need for extra tracks/channel strips, and would be the preferred method for inserting an analog effect in any DAW that offers the feature.

Of course there’s more to patching in analog effects than just the basic routing; various considerations will have to be addressed—some obvious, some potentially more obscure, but all important to getting the best sound from the analog side.

One of the main considerations when inserting an analog effect in a DAW mixer channel is level. In the digital world audio signals remain clean right up until they hit the maximum peak level (0dBfs); but on the analog side, continuous average levels have a lower maximum, typically around 18 to 24 dB less. A hot audio signal playing back perfectly cleanly in a DAW track might be too strong for an analog hardware device, causing unwanted distortion—it’s up to the mixer to make sure that the signal coming out of the interface’s spare out is at an appropriate level for the analog device it’s being sent to, and that the level of the processed signal being returned to the DAW is brought back up to the same level it was before the analog insert. That’s why the i/o plug-in shown above has output and input level controls—the interface’s internal level calibration may take care of this adequately, but the engineer needs to keep an eye on it anyway to make sure, and make appropriate settings if required.

Another potentially less-obvious consideration is impedance. With modern analog gear the voltage transfer between gear is pretty much automatic, but a lot of times the analog hardware being patched in may be a vintage piece of gear; some really old classic tube EQs and compressors—like a very old Pultec or LA-2A—might date back to an era before modern impedance requirements became the norm. If a classic unit was designed for matching impedances of 600Ω, it might suffer from signal loss and unwanted distortion if those different impedance requirements are not accounted for. If you were to come across a really old piece of analog kit with, say, barrier-strip connections on the back (instead of XLRs), this might be an issue that would potentially need looking into.

Both impedance and level are also an issue when re-amping—inserting a real guitar amp in a too-clean guitar track (like a DI recording) in the DAW. While many mixers would probably turn to an amp sim nowadays, re-amping with a real amp has always been a popular approach, both for the distinctive sound that a certain amp may offer, and the subtle ambience and depth that can come from actually miking up the amp in a real room.

The line-level signal coming out of the DAW spare output will usually be too hot for an amp’s input, and its output impedance may not be a proper match for the amp’s higher input impedance, which assumes a much lower-level signal straight from an electric guitar (or bass). A dedicated re-amping box can be used to properly match both level and impedance, insuring that the guitar signal’s frequency response and the range and character of the distortion obtained from the real amp is exactly what’s intended. 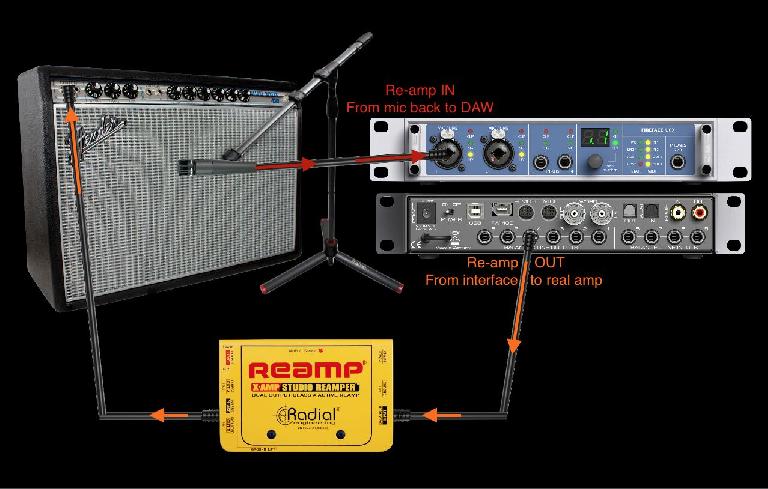 For those situations where nothing will do but a piece of real analog hardware, pulling signals out of the DAW and inserting hardware into a DAW channel strip can be relatively easy to set up, as long as the various considerations involved are all properly taken into account. And when it’s done right there’s nothing cooler than the sound of a vintage piece of analog hardware contributing its magic to a modern mix.

Learn everything you need to know about mixing and mastering with hundreds or pro videos: https://ask.audio/academy?nleloc=category/audio/topic/mixing